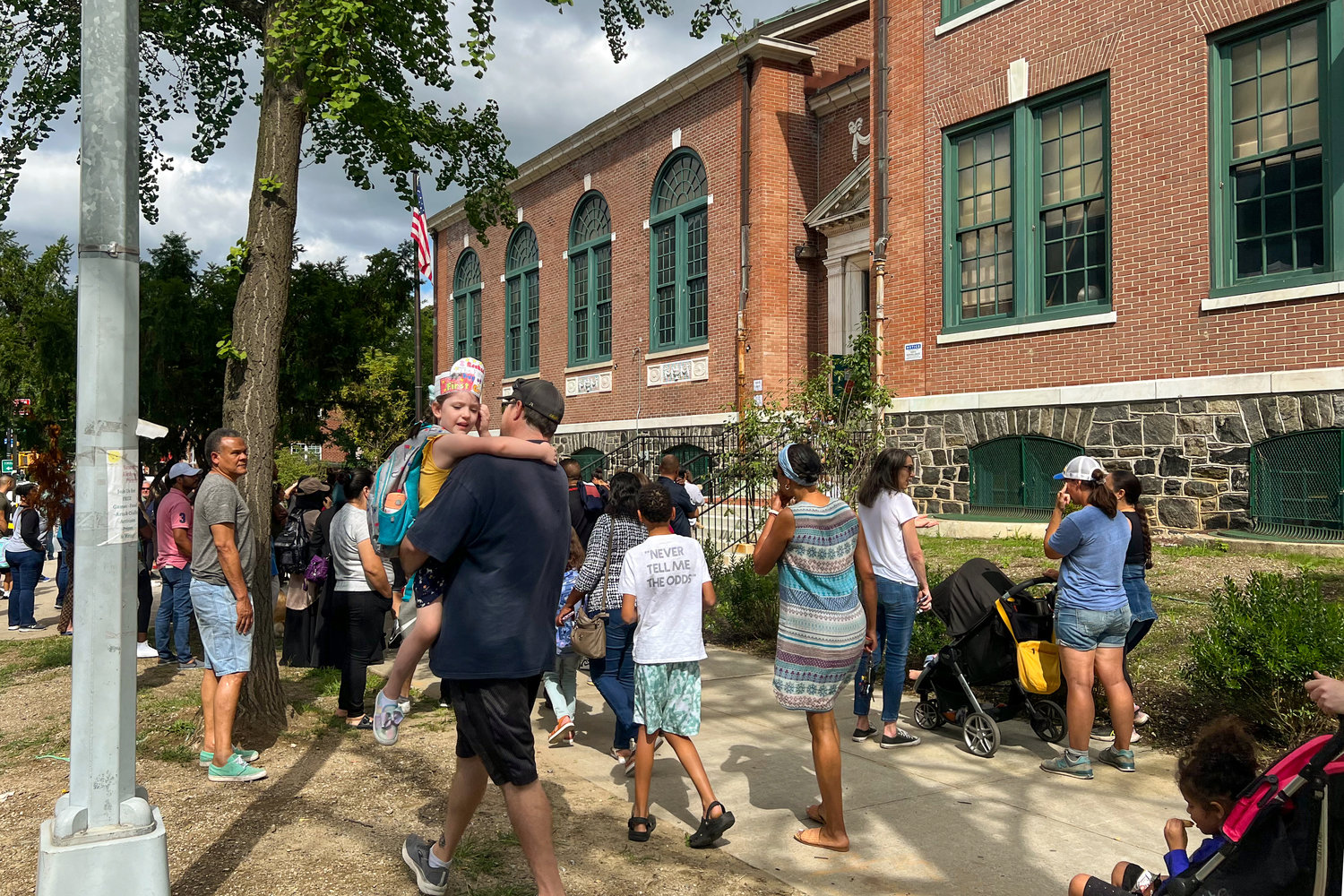 Public school students began the first day of school on Sept. 8, despite the quarrel between schools and the city administration. P.S. 81 Robert J. Christen is one of the schools in the northwest Bronx that are affected by the school budget cut of more than $400 million. The school is losing less than 10 percent of its base level funding.
Stacy Driks
By Stacy Driks

Balloons and signs were strung up on around P.S. 81 Robert J. Christen last Thursday for a warm welcome as students walked through the front doors to mark the new school year.

During dismissal at 2:45 p.m., dozens of parents, family, and friends opened their arms as their children ran out of those front doors, some with smiles and some with creative wearable art.

It was a sunny, yet chilly, morning. Unlike some students who dread going back to school, Atreus Demanana had butterflies as he started his first day as a second-grader.

He also came dressed to impress while wearing his first “Gucci” outfit — fake, of course, as his mother, Naomi Demanana, told The Riverdale Press.

“Teachers are always the responsible ones who buy supplies like they literally go out and buy stuff,” Naomi said.

Yet, not everything was as exciting as it sounds. Atreus was unaware his school lost four teachers to spending cuts after Mayor Eric Adams issued his preliminary fiscal year 2023 expense budget on Feb. 16, which included a $374.6 million cut to the education department based on enrollment.

Since then, parents, teachers, and some students have protested and argued for a reversal. Yet, Adams and the education department chancellor David Banks don’t want to make any changes.

“We lost some special classes that were helping the kids with reading,” Naomi said. “I had a friend whose kids were affected by that.”

The school is losing one Academic Intervention Services position intended for students who are struggling with math and reading.

As Atreus enters the second grade, the size of the classes has increased by 11 percent from the previous term, according to the education department’s data.

Atreus thought it was “not nice” that the school was losing money and its teachers as part of a 10 percent budget cut.

“I feel really mad about it, I think more money should go into schools, there is like a funding proxy war; it’s like they don’t care about us here,” Naomi said as she explained her son’s frustration.

Instead, the parent association is forced to spend more money to make a happier environment for their students. This includes after-school programs and events.

As a parent, Naomi says it just hurts more and more parents.

Yet, this summer has been long and confusing for most educators and parents who are trying to understand school budgets.

Here is a run-down:

The department’s share was $215 million as a result of lower enrollment.

Principals were quiet about the cuts, until they received their individual reduction in June.

According to council speaker Adrianna Adams, lower enrollment should not be a reason to take away money from schools.

If student enrollment continues to drop, there will likely be even more fallout and financial strains on schools.

Meanwhile, Comptroller Brad Lander’s analysis showed that there is a chance a greater cut. Individual schools could see up to $469 million cut according to the enrollment budget expenditure formula.

There are some schools with unchanged or increased enrollment that received more funds. For example, P.S. 86 Kingsbridge Heights School had its base level funding cut to $1.9 million. While at the same time a Queens school, Woodside Intermediate middle school, gained $2.5 million.

Schools were forced to excess teachers because they couldn’t afford them. Yet, that doesn’t save the city any money because the teachers still get paid as they wind up teaching at other public schools.

“Our resolution directs the mayor and chancellor to facilitate DOE to restore the $469 million it has removed from school budgets,” said Speaker Adams.

Announced on Sept. 6, the council asked Banks to show the updated school budget to the Panel for Educational Policy.

This also includes the unspent federal stimulus funds. The council says the amount of these funds was never shown to the public.

There were parents and teachers who sued to reverse the cuts. The judge, who oversaw the case, sided with the plaintiffs and ordered the council to conduct a re-vote.

The council said it can’t issue a re-vote since the budget is already complete. The only possible move to make is a modification that needs cooperation from Mayor Adams.

The court case revolves around the fact that the process to pass the budget this year was illegal, and against state law. They allege that the budget passed over the PEPs head for comment before the official city council vote took place.

The upcoming appeals court hearing is scheduled for Sept. 28, for now.