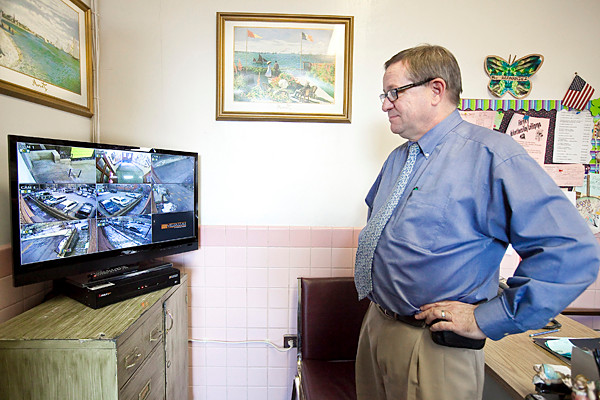 Jayson Bock, principal at St. John’s School looks at the flat screen security monitor on Monday. The security system, called Digital Watch Dog, allows him to view the system from his office computer as well as from his smartphone.
Marisol Díaz/The Riverdale Press
By Sarina Trangle

Schools are reviewing and ratcheting up security measures in light of the December massacre at Sandy Hook Elementary School.

In the nearly two months since Adam Lanza shot his way into the Connecticut school, administrators have taken steps as visible as conducting lockdowns and increasing the number of security personnel, and as subtle as making sure only one person has the authority to allow guests onto the premises.

Bronx Theatre High School Principal Charles Gallo said he organized a meeting with the principals and security leaders at the Kennedy Campus immediately after Sandy Hook. He said the building response team, which he leads, had already been discussing ways to improve the security plan for months but that the shooting helped speed things up.

“It’s all come to a head now,” he said. “People think that it will never happen in my neighborhood. Now, in this time that we live in, these are plans we have to make. They’re non negotiable.”

Several school administrations indicated that they have begun to train staff and students on how to respond if an intruder were to get into the building.

Principals at The Marie Curie School for Medicine, Nursing and Health Professions, St. John’s, St. Margaret’s and St. Gabriel’s said students have practiced lockdowns in which classroom lights are turned off, doors are locked and students sit silently to give the illusion of empty classrooms.

The Department of Education already required public schools under its purview to practice “soft” lockdowns, in which security personnel and administrators man a command post because no imminent danger has been detected; “hard” lockdowns, in which every member of the school community avoids an intruder; “shelter-ins,” in which staff lock entrances and exits to keep students from imaginary dangers, and evacuations.

But public schools are still taking additional steps toward safety.