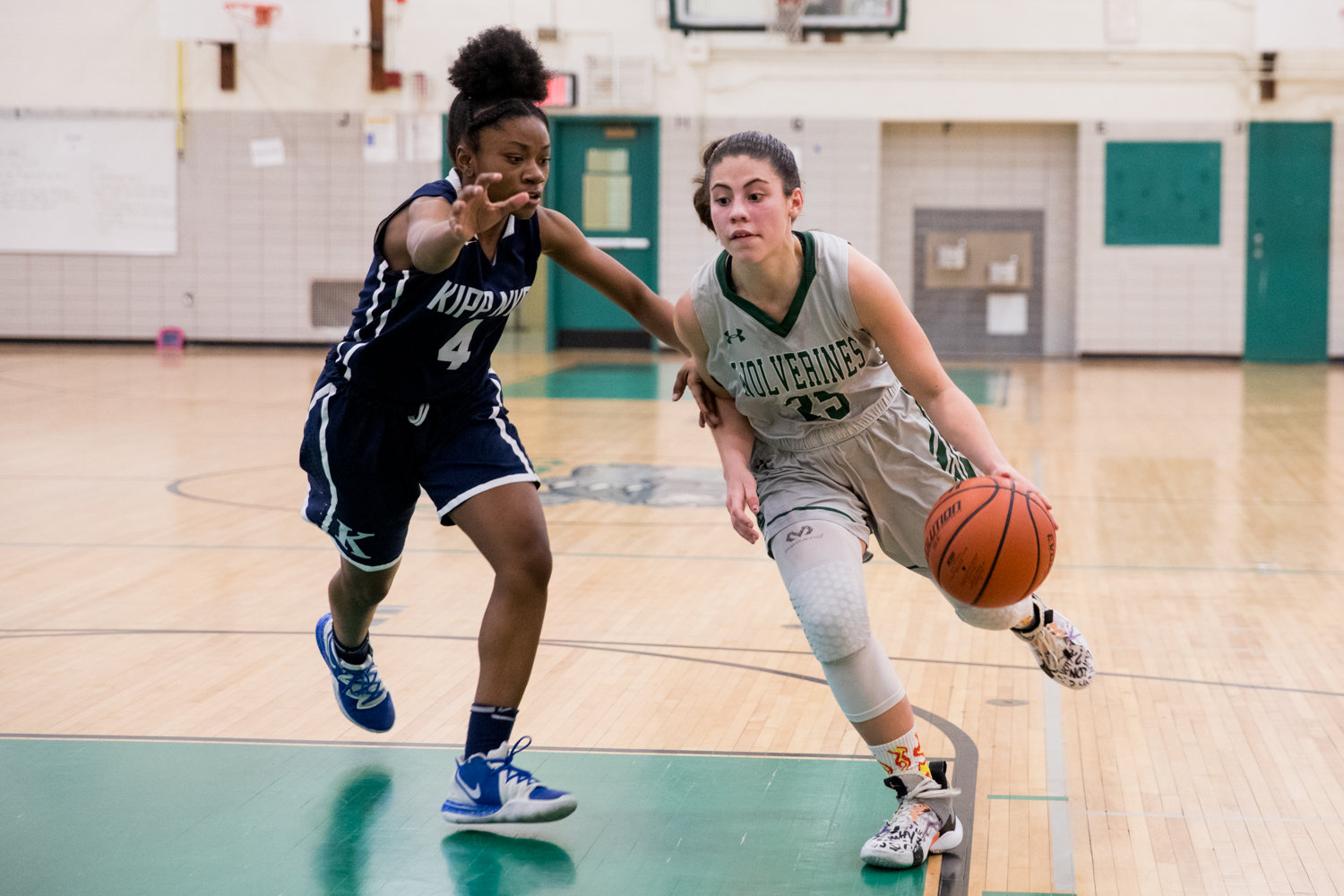 Bronx Science junior guard Carolina Lopez works her way around a KIPP defender for two of her 13 points in the Wolverines’ 56-27 victory.
JULIUS CONSTANTINE MOTAL 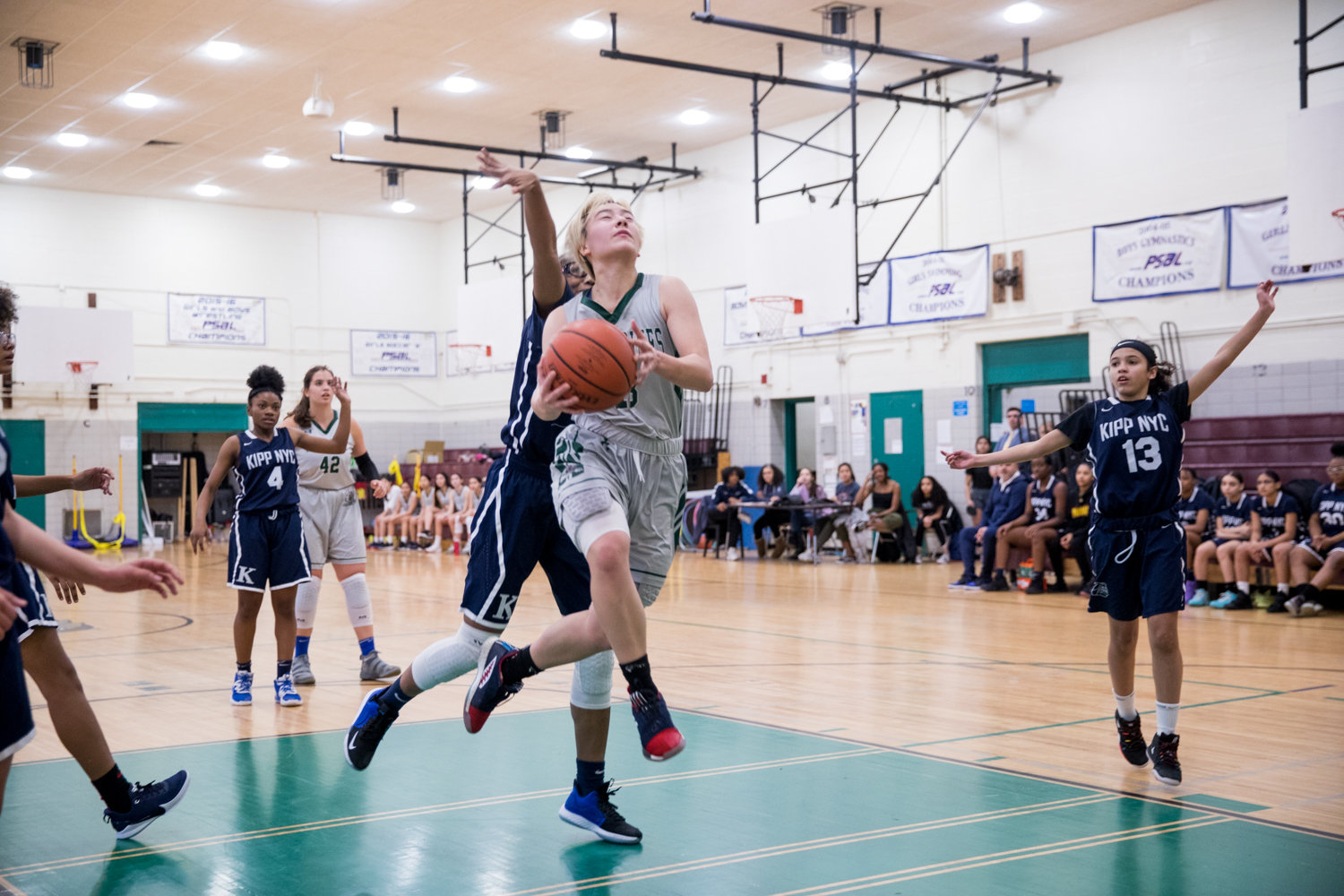 Bronx Science’s victory over KIPP last Thursday was barely in the books, but Sarang West was already looking ahead.

The triumph over KIPP, a 56-27 shellacking, was just an appetizer for the Wolverines. The main course, of course, would be when they would host archrival Mott Haven, a team that not only handed Science (14-2) one of its two losses this season, but also knocked them out of the Public School Athletic League playoffs last year.

Adding to the drama was the bad blood between the two programs, born out of Mott Haven barring any and all Science fans and parents from attending the playoff game at their home gym last February. So this time around, Bronx Science returned the favor and stocked their gym with only their fans. Sort of a Wolverines version of the Friends & Family Plan.

“Everyone knows what the stakes are,” West said after the KIPP win.

Mott Haven “is a must-win game, so I think we’re all going into that game with a kind of vengeance mentality. I’ve had it circled on my schedule for a while. Everyone has had this game in the back of their heads. Everyone wants to win the division, and they are our only obstacle. We just got to go in and do what we do.”

West sure did what she does, which generally is piling up points on a regular basis. This time she helped blow open what had been a tight contest at the half by exploding for six three-pointers and 20 points in the third quarter as Bronx Science smoked Mott Haven 57-33 in front of a frenzied home crowd.

“It was one of the most incredible quarters I’ve ever seen anyone have. Ever,” Bronx Science head coach Michael Mei said. “It was amazing.”

The Wolverines opened the game with a 10-4 lead, but the rest of the first half saw both teams waiting for its offense to start clicking. Bronx Science scored just eight points after its quick start, leading 18-16 at halftime.

Then West found her shot and the Wolverines took off in the third quarter.

“Going into the half I wouldn’t say morale was low, but everyone had their heads down because we were only up by two and we weren’t making any of our shots,” West said. “So a point of emphasis in our halftime huddle was to get the same looks, and then just hit those shots. I hit my first two and then I felt like I was in a rhythm. They weren’t getting any tighter on defense, so I just kept letting it fly.”

When the smoke cleared from West’s aerial bombardment, Science was up 42-24, and cruised the rest of the way.

“They came out and scored the first five (points) in the third quarter, and then Sarang played like a person possessed,” Mei said. “Six threes, and they were all within the flow of the offense. Carolina (Lopez) was facilitating the offense and she would break down her defender, find Sarang, and then it was literally game over. We actually had the lead up to 30 at one point.”

And all through the lopsided win the packed gym — known as the Wolverines’ Cage — roared its approval.

“It was a raucous crowd,” Mei said. “There were more kids in that gym than I’ve seen for any other game that I’ve coached there.”

It was an atmosphere the likes of which West had not seen previously.

“It was pretty great hitting all those shots, and the crowd’s reaction definitely added to that,” said West, who finished with 29 points. “It was one of the biggest crowds I ever played in front of at Bronx Science. At a lot of our games, it’s usually only the parents that come. Overall we don’t get too many people watching our games, so it was definitely new for us.”

It was the perfect ending to Science’s senior night, one which saw the Wolverines’ lone senior, Kaitlyn Romanger, open the game with a three-pointer. But now Science turns its attention to winning the division — they were scheduled to complete the regular season with road games at Longwood and Evander on Feb. 3 and Feb. 4 — and being a major player in the upcoming PSAL playoffs.

“I told them if they play the way they played this last week, we can definitely make a deep playoff run,” Mei said. “We turned the corner, and we’re playing at a high level at just the right time.”