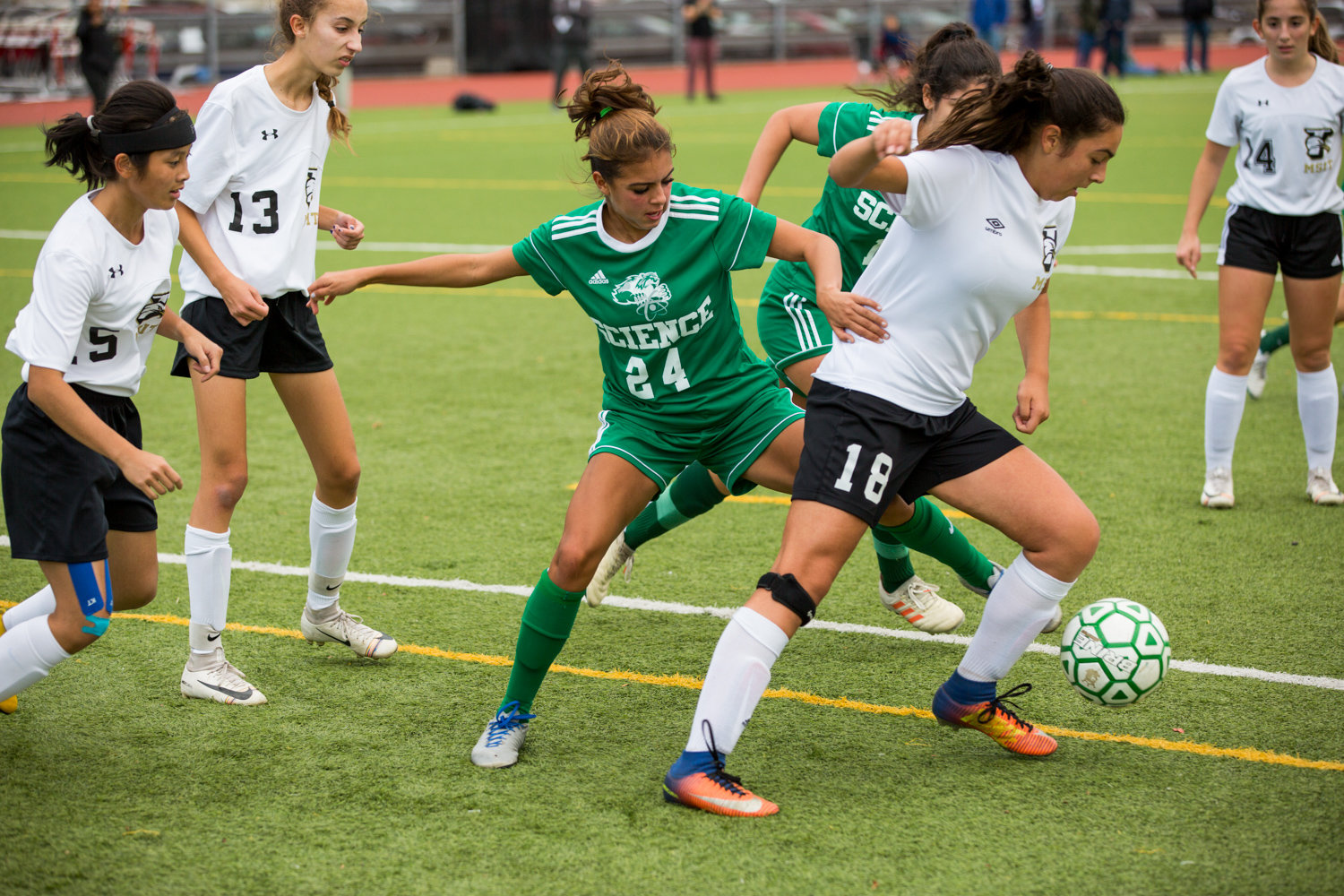 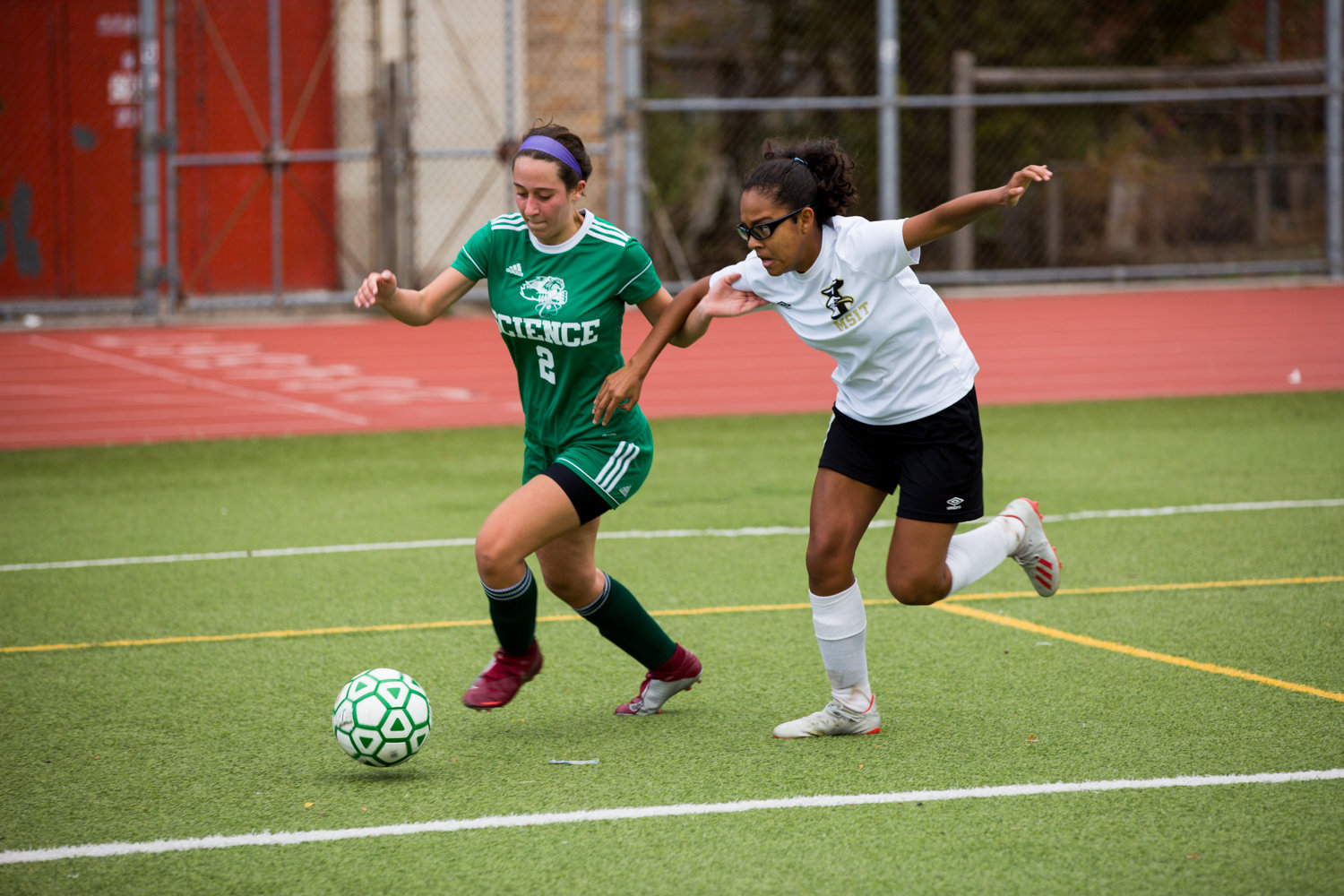 Bronx Science senior Sofia Mahairas makes her way around a McKee defender in the Wolverines’ second-round playoff victory over the Seagulls.
JULIUS CONSTANTINE MOTAL
Previous Next
By SEAN BRENNAN

It was shortly after the Bronx Science girls soccer team had just put the wraps on its 1-0 victory over McKee in the second round of the Public School Athletic League playoffs that head coach Annie Eckstein turned her focus to the Wolverines’ mega quarterfinal matchup with No. 2 seed Francis Lewis.

“I’ve said it all year,” Eckstein said. “I think we can play with anybody in this tournament.”

It’s that attitude of “bring it on” that seemed to be in the Wolverines’ DNA this season.

“I know we can play with anybody,” said junior Sophie Silbert, whose second-half goal provided the margin of victory in the win over McKee. “We just have to be ready and come in with a positive attitude against Francis Lewis.”

So the Wolverines made sure they packed that attitude along with their equipment for the trip to Queens last week with the hopes of taking down mighty Francis Lewis. And confidence was high for Science as earlier this season the Wolverines dropped a hard-fought 1-0 decision to Beacon, tabbed as the top seed in the PSAL’s postseason tournament.

So taking on the No. 2 Patriots did not exactly intimidate the Wolverines. And facing the Patriots on their home turf just added to the challenge.

Well, sort of their home turf. When both teams arrived at Francis Lewis’ field, both Eckstein and Patriots’ head coach Eleni Sotiriou deemed the field unplayable due to heavy rains. So both teams piled into an array of cars and vans for the 10-minute drive to nearby Cardozo High School where, more than an hour after the scheduled starting time, the much-anticipated quarterfinal finally got underway.

But maybe it was that extra travel. Maybe it was the fact the Wolverines were forced to play most of the game without one of their top players, senior Elena Morgan, who was hobbled with an ankle injury. Maybe it was the missed offensive opportunities Science saw come and go without a goal.

Maybe it was all of the above. But when it was all over, the Wolverines’ galant march to a hoped-for PSAL championship was over as Francis Lewis pulled off the 2-0 victory.

“The result, obviously, was not what we wanted,” Eckstein said. “But I actually thought we played a really good game, played some really good soccer. We created some opportunities, but their goalie (Sophia Tartaglione) made two really nice saves to keep them in the game. I thought we put a lot of pressure on them.”

Francis Lewis took a 1-0 lead when Dayssy Acuahuitl scored from the right corner just eight minutes into the match. But Science turned up the heat on offense, creating a pair of scoring chances later in the half. On a three-on-one break, Silbert’s shot sailed wide right.

A short time later, Ruby Hogue’s header from in front also missed its mark. Hogue had another opportunity early in the second half, but Tartaglione came up with a huge stop to keep Science scoreless.

Not long after Hogue’s scoring attempt was stopped, the Patriots’ Alyssa Cabral scored for a 2-0 lead, and the Wolverines’ dream season was over.

“I thought we played a really nice game, some of the best soccer that we’ve played all season,” Eckstein said. “That’s what we knew we had to do, but we just could not get the back of the net. Sometimes that happens.”

Not having a healthy Morgan also put a glitch in Science’s game plan.

“She wanted to be out there, but she couldn’t really move around,” Eckstein said. “It was a big loss for us not to have her. She’s a starter and she’s been contributing consistently throughout the season. So not to have her as an option was tough.”

Playing without her long-time teammate was a huge setback for the Wolverines, Mahairas said.

“I know Elena hurt her ankle pretty badly, so it was tough for us because we’ve been playing together for four years,” Mahairas said. “So it was very difficult for sure.”

Despite the loss, Science finished the season 11-3-1 in its first season in the highly competitive Manhattan A Division.

“We’re definitely proud of ourselves,” Mahairas said. “We really did our best and we got pretty far. I feel like we left the field and left the season on a good note. We did everything we could. It just didn’t work out this time.”