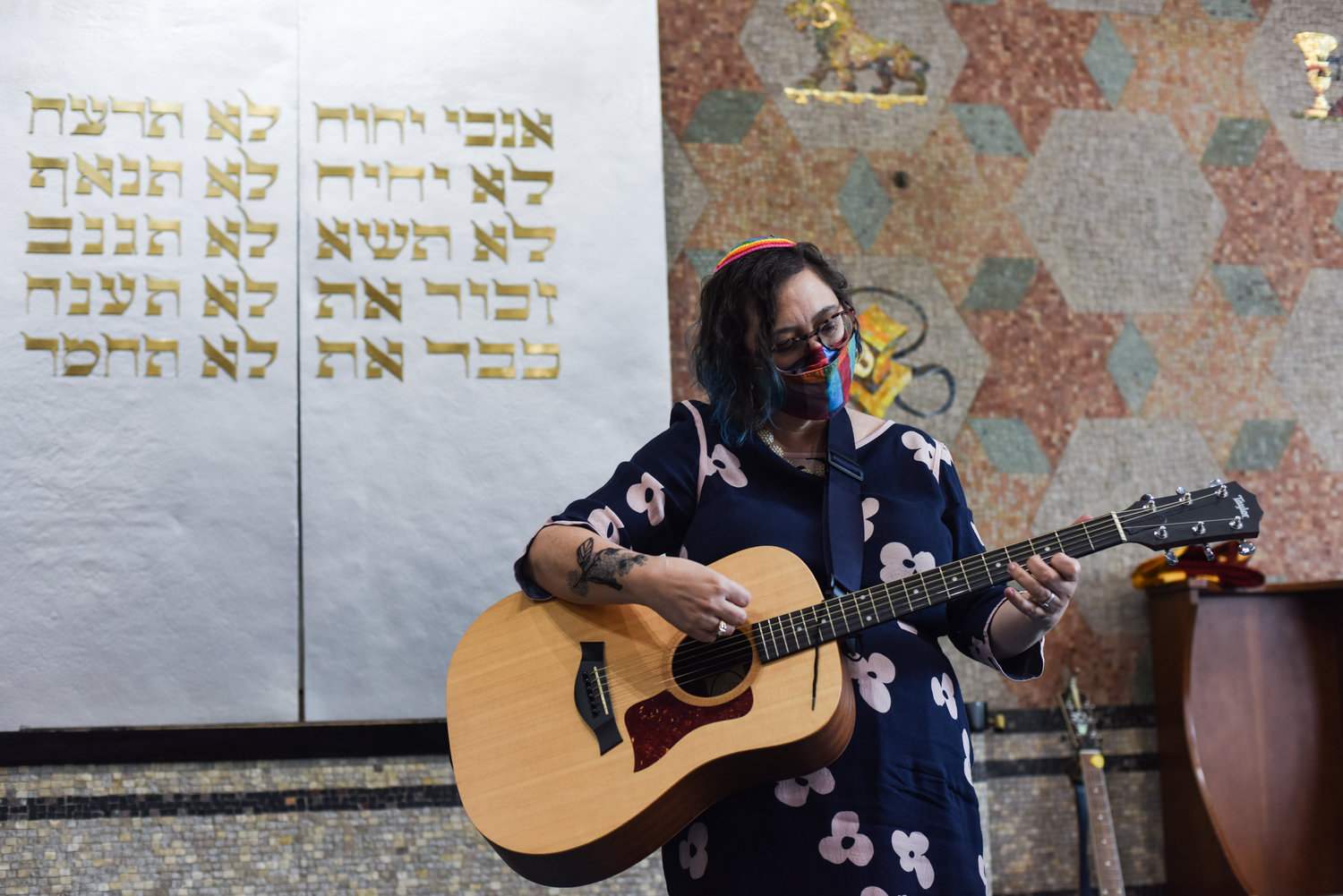 There’s no Pride month without a Pride Shabbat at the Riverdale Temple. This year’s guest speaker at the Independence Avenue synagogue was Rabbi Nikki DeBlosi, who has partaken in other Pride Shabbats and is a member of the Central Conference of American Rabbis.
NOAH BENUS 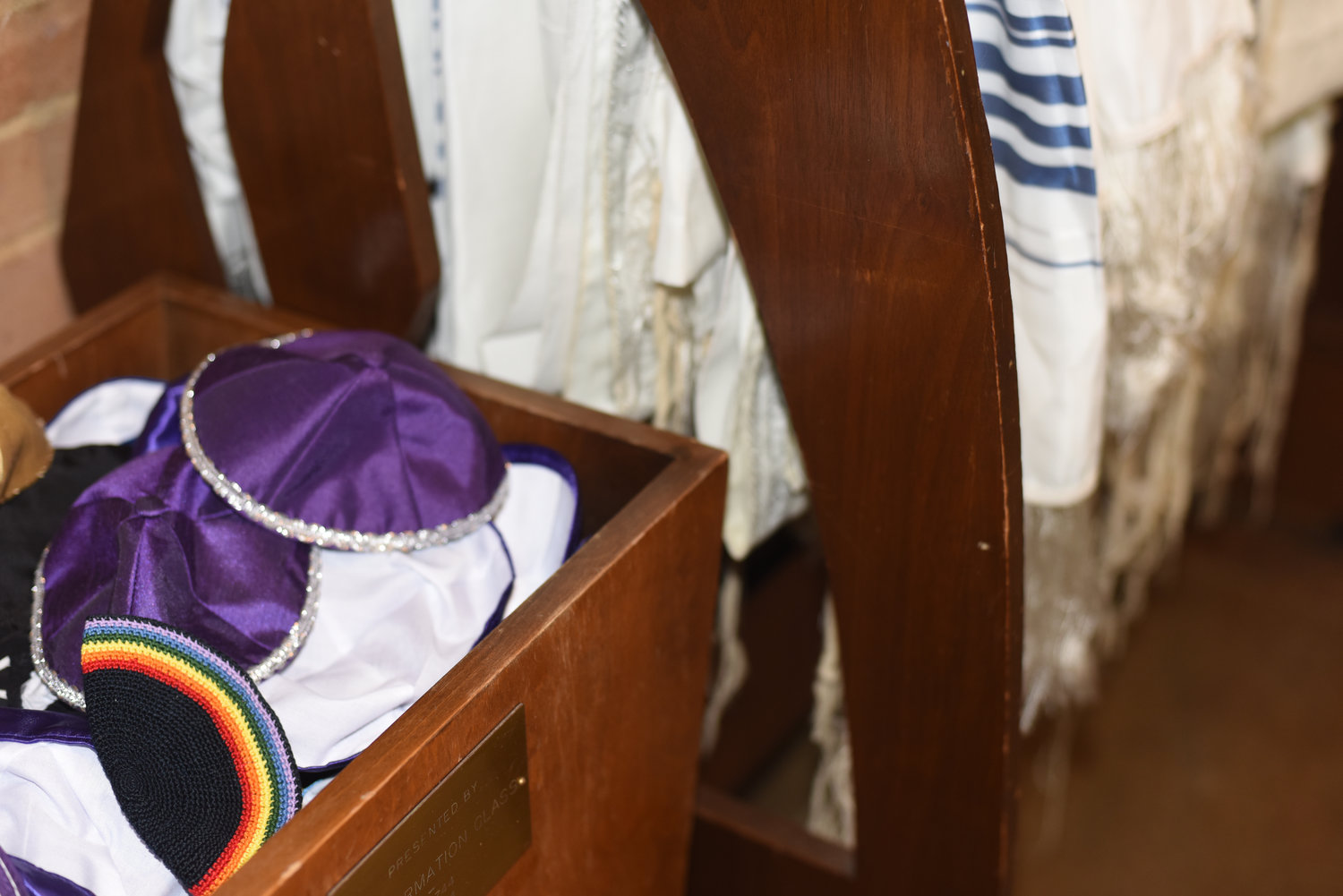 Sherry Kassel donated a Pride-themed Yarmulke saying she had an extra. She hoped it would make another LGBTQ congregant feel comfortable at Riverdale Temple with their Jewish faith.
NOAH BENUS 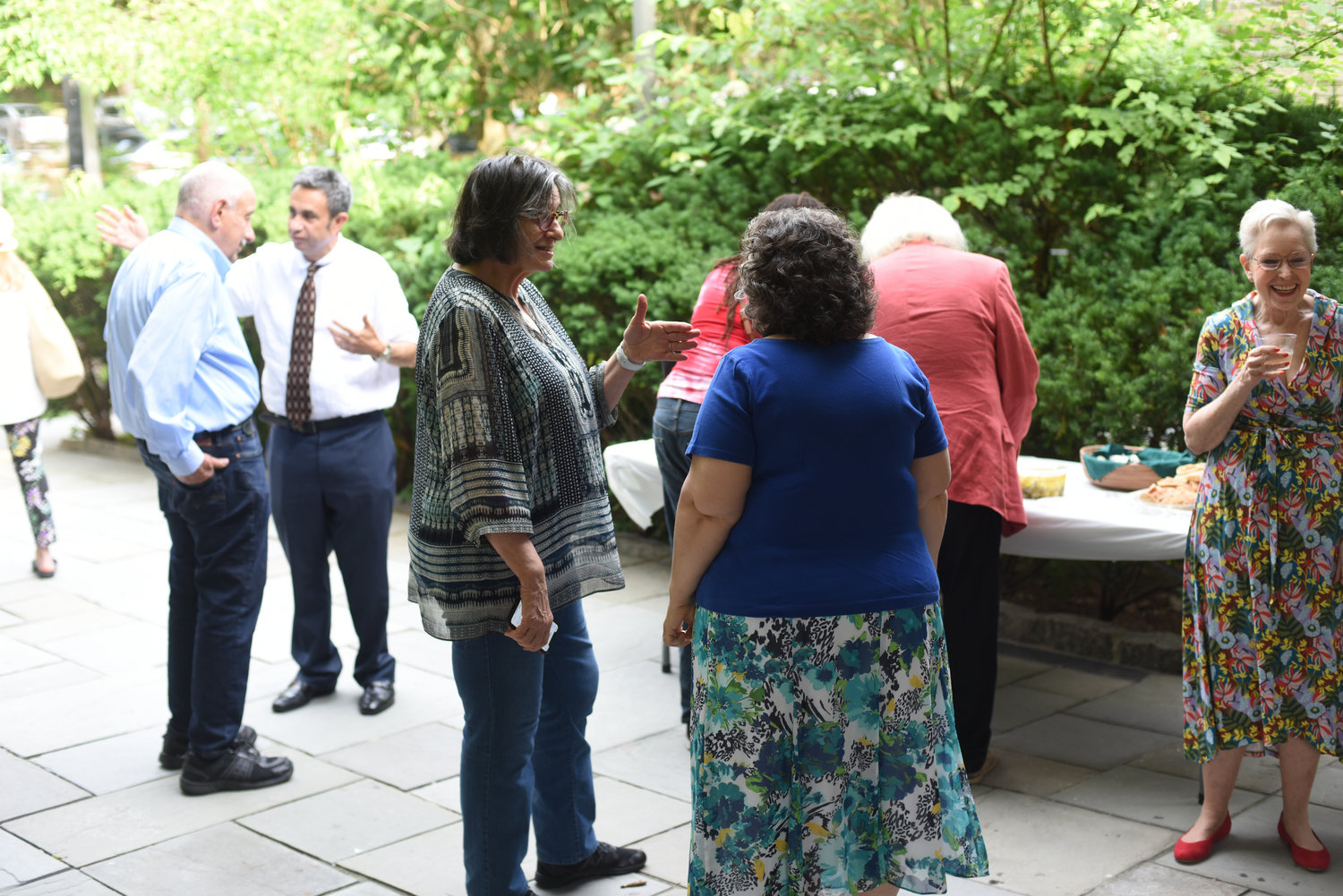 Rachel Rodna and Carol Kassel were just two of the many guests at last weekend’s Pride Shabbat at Riverdale Temple. They joined others to partake in light refreshments during the oneg ahead of Shabbat services.
NOAH BENUS
Previous Next
By JILLEEN BARRETT

When many outside the LGBTQ community think of Pride, the first thing that comes to mind are likely parades and parties.

What might not be immediately thought of, however, are religious services. Yet, despite some larger religions shunning them, many in the LGBTQ community are people of faith. And longstanding institutions like Riverdale Temple extend a much-appreciated welcome mat to the community through its yearly Pride Shabbat.

A near-regular event at the synagogue since 2015, Rabbi Thomas Gardner feels this special Sabbath recognizes where the Jewish faith and the LGBTQ community intersect — and gives the Reform synagogue a chance to create a more inclusive environment.

Starting at sunset last Friday, this year’s Pride Shabbat began with an oneg, a gathering where congregants socialize while enjoying light refreshments in the plaza just outside the Independence Avenue synagogue. Nobody was required to wear masks, although everyone attending proved they were vaccinated — something that has allowed Riverdale Temple to get much of its Shabbat services almost back to normal.

“Basically, overall, indoor services are still fully vaccinated people,” said Shelley Ast, who leads the synagogue’s study and worship team. “On occasion, we do services out here in the plaza, and then it’s outdoors so you don’t need” to be vaccinated.

As far as temple president Ronna Weber remembers, the synagogue has always hosted a Pride event. Well, not quite every year.

“It’s really nice that now that we’re coming to the end of the COVID pandemic, we actually have an opportunity to go back to a lot of the programming,” Weber said. “We didn’t do our Pride (Shabbat) last year. So it’s wonderful to be able to do it this year.”

Carol Kassel was among those in attendance at this year’s Pride service with her wife, Sherry. Both were enthusiastic to be at an in-person event at the temple. For the oneg, the couple brought cupcakes decorated with different colors of the rainbow made by their daughter, Lucy. The rainbow flag has long represented the LGBTQ community in different forms.

“This is only my second time here in the post-COVID lockdown world, and I’m really just excited to experience the service,” Carol said. “You know, we attended some Zoom services and it was great. It was great to have Zoom. But it sure is nice to be back with the crowd again.”

The guest speaker for this year’s Pride Shabbat was Rabbi Nikki DeBlosi, a member of the Central Conference of American Rabbis, who uses their Facebook group to educate visitors on LGBTQ issues. She also was a rabbi with New York University’s Bronfman Center for Jewish Student Life. And she runs her own queer-positive Instagram account.

Shabbat is an important holiday for Jews, DeBlosi said, and therefore a Pride Shabbat is pertinent to the Jewish LGBTQ community to feel comfortable and accepted in any temple. Central Conference of American Rabbis

“At this particular service in Riverdale, we’re going to be using readings by LGBTQ Jewish folks, many of them by people who also happen to be rabbis and some not,” DeBlosi said. “There’ll be prayers in Hebrew, and in the same order (as usual), but some of those prayers will be interpreted through the words of a modern poem that centers the experience of LGBTQ folks.”

After speaking at many such events at other synagogues across the region over the years, DeBlosi has a clear idea of what the special commemoration means to her.

“For me, Pride Shabbat is an opportunity to acknowledge the way LGBTQ folks have been excluded or silenced in the Jewish community over the thousands of years of our history, and our culture, and our religion, to show we’ve always already been there. and to celebrate our inclusion,” she said.

The rabbi also recognized how this event may be difficult for some.

“It can be really hard to walk into a synagogue space or speak to someone who wears the hat — literally — of a rabbi, when so much trauma has been done by and in the name of our tradition,” DeBlosi said. “And I really honor and acknowledge and validate that.”

Gardner emphasized the importance of unraveling the issues that have built up between faith and LGBTQ, saying Pride Shabbat can encourage people of Jewish faiths to engage in mitzvahs — or good deeds — toward LGBTQ people so that all celebrations include them.