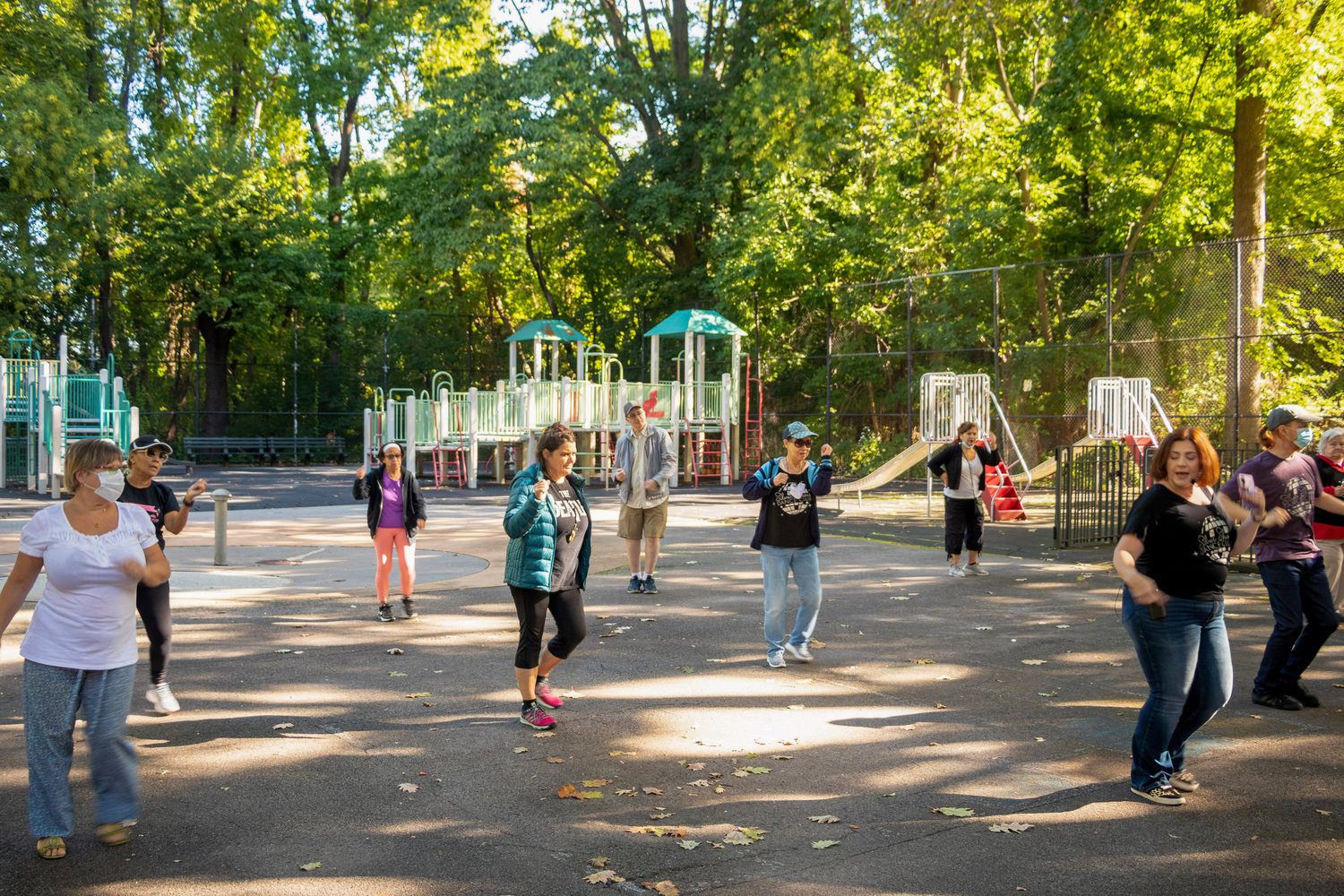 Daniela Del Giorno leads one of Silver Shoes Dance Club’s free classes at Van Cortlandt Park’s Classic Playground, across the street from the Amalgamated Houses. Del Girono founded Silver Shoes to help those over 55 to stay physically healthy and mentally sharp as they age.
BRIAN ASARE 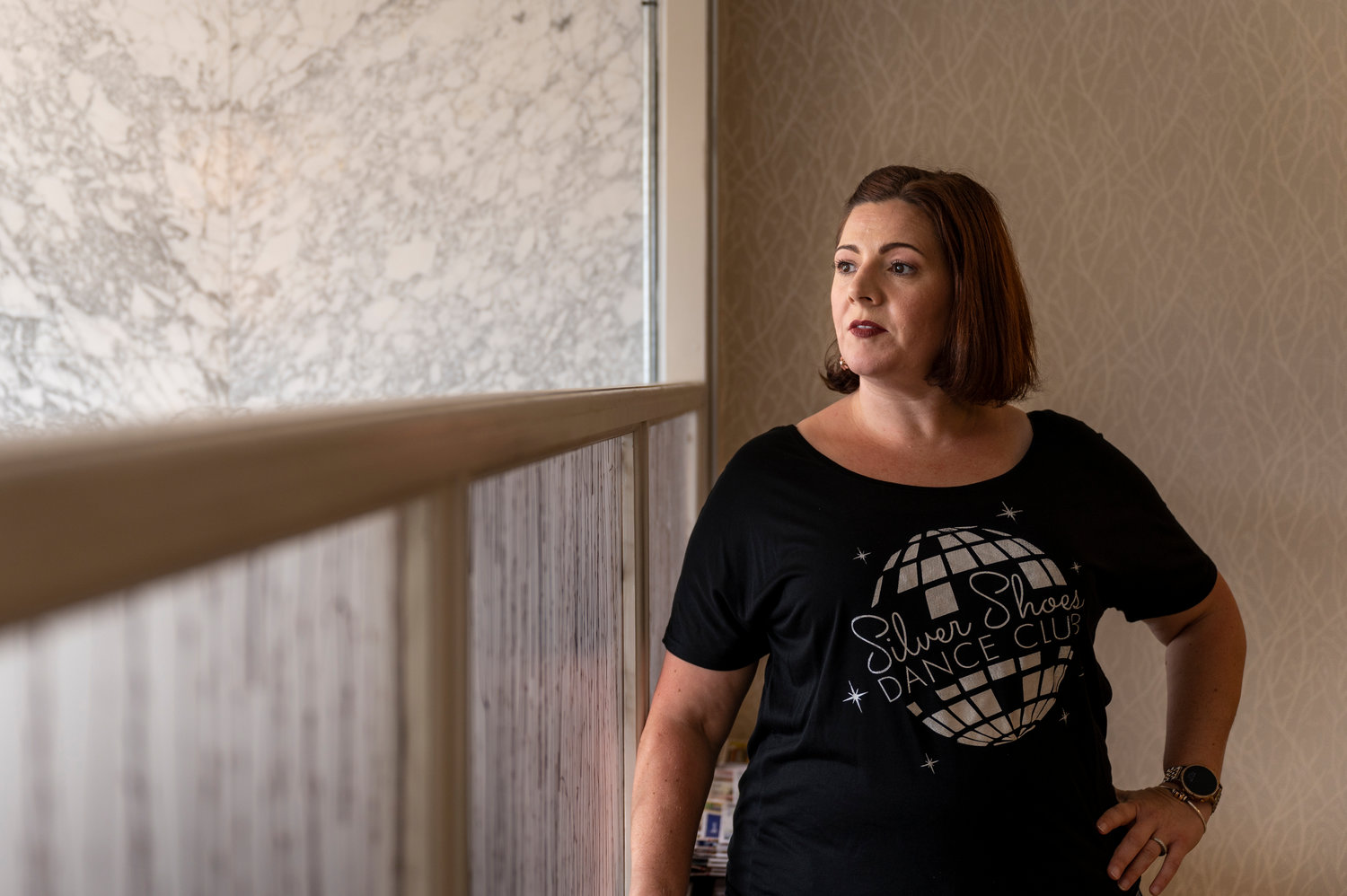 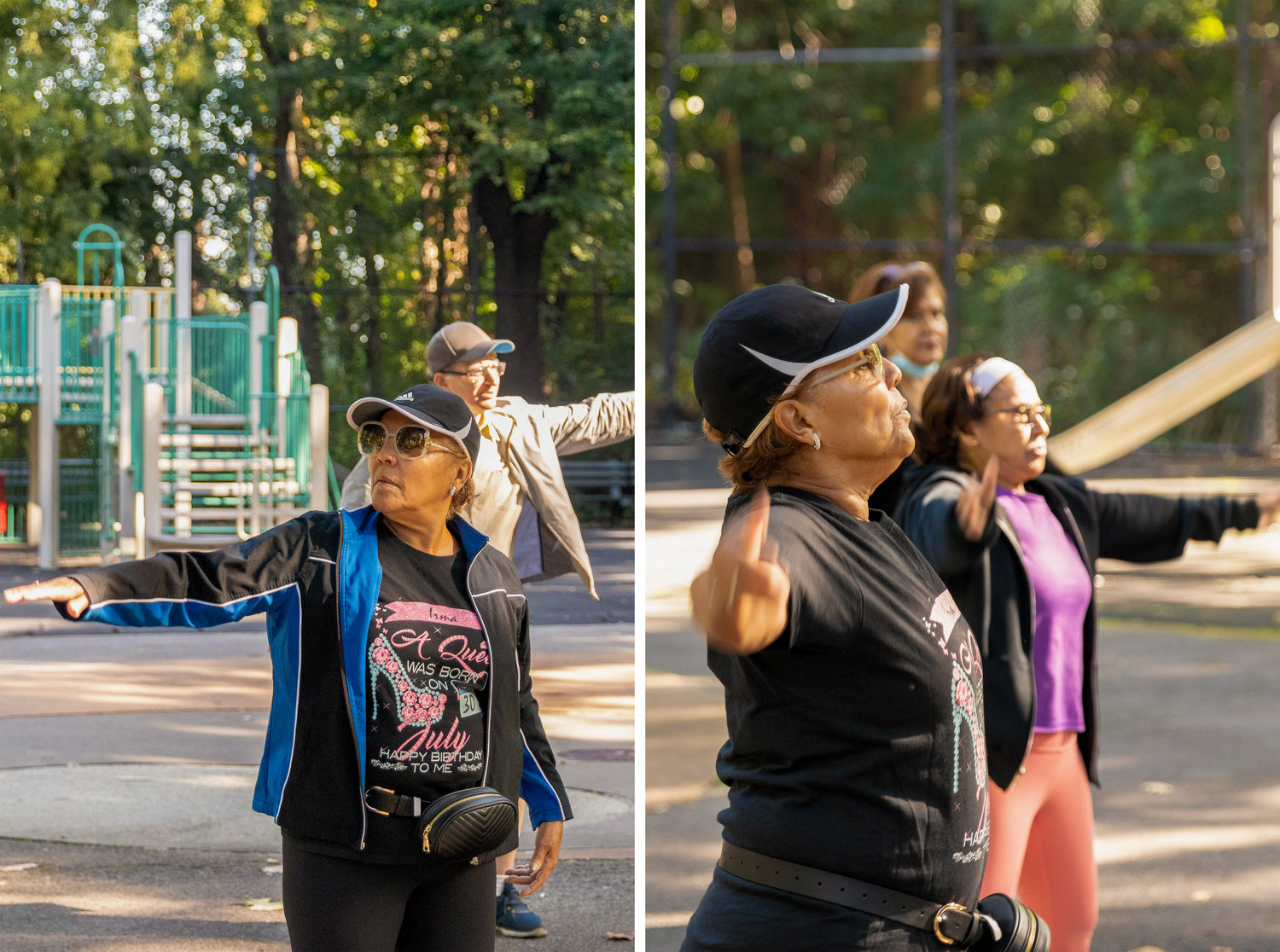 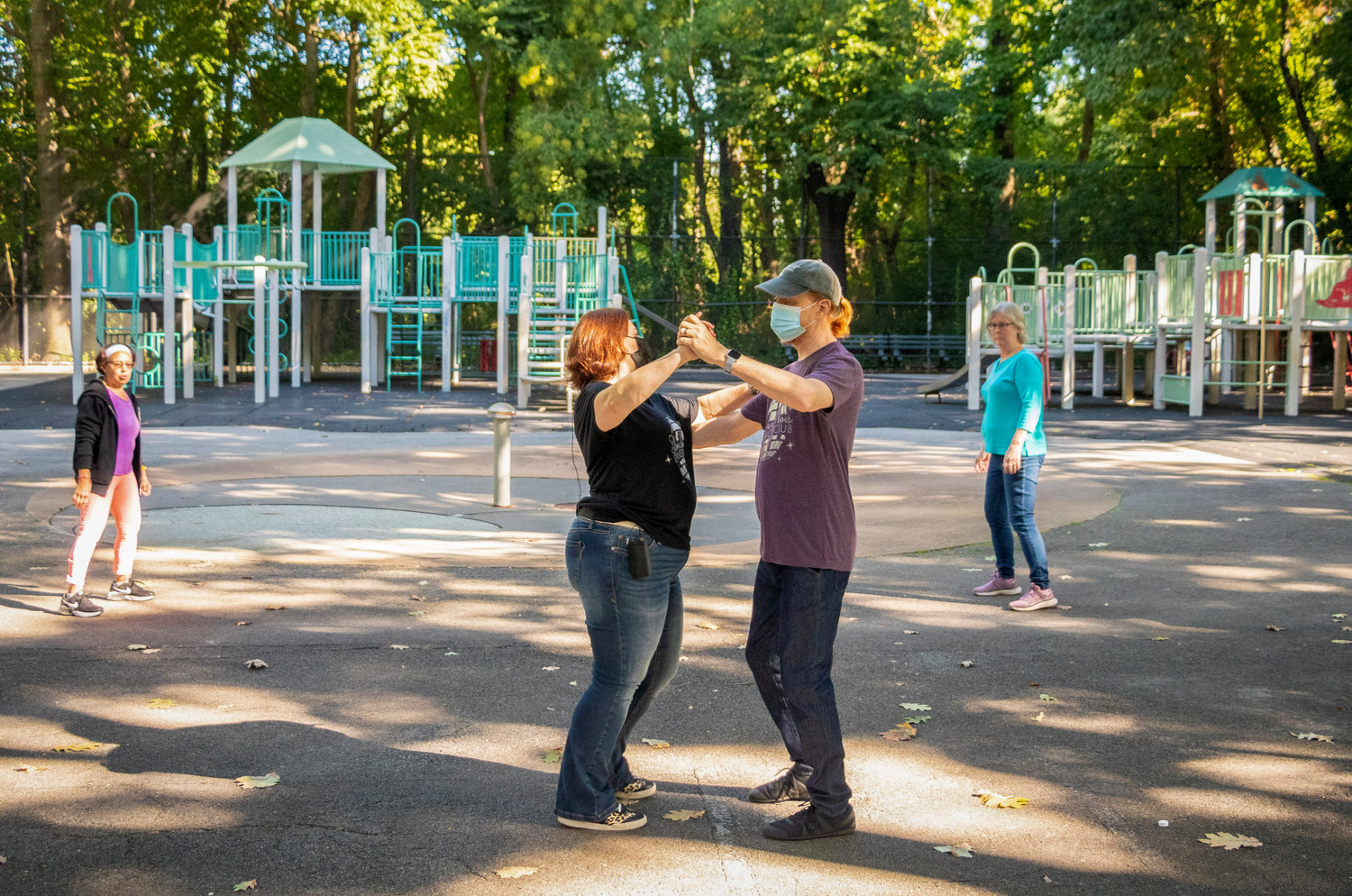 How does someone keep their mind sharp and their body healthy as they age? That’s a question many have probably asked themselves at some point, especially as they get older.

Fortunately, Silver Shoes Dance Club is here for those very people in this corner of the Bronx, helping them discovery ways to stay physically and mentally fit for as long as possible. And maybe even make some new friends along the way, too.

Silver Shoes offers free in-person and virtual ballroom and Latin dance for adults older than 55. The club meets in-person four days a week at different local greenspaces including Henry Hudson Park and Classic and Woodlawn playgrounds in Van Cortlandt Park. It also holds virtual classes every week for those who still aren’t comfortable being in-person amid the ongoing coronavirus pandemic.

Silver Shoes is meant to be a sequential program, Del Giorno said. That means students are encouraged to come back every week and build upon skills from previous classes. And then students get to show the culmination of what they’ve learned in a final performance.

Fostering social interaction among older adults who don’t have many chances to meet new people is crucial, Del Gornio said. But especially since the onset COVID-19.

“There was a huge need before the pandemic,” she said. “But now more than ever — because so many older adults have lost a loved one, either because of COVID or just during the course of this horrible year. And isolation and loneliness and depression. It’s huge. There’s such a need for opportunities for older adults, not just to be physical, but to have fun and to socialize. And to learn a new skill and really promote this whole idea of ‘creative aging.’”

Before founding Silver Shoes, Del Giorno spent 20 years teaching ballroom and Latin dance, primarily in the city’s public schools with Dancing Classrooms — a program that aims to foster social and emotional development in children through dance.

After that, Del Giorno moved on to teach adults at ballroom dance studios.

“I saw how people really came together from all different backgrounds, how they really kind of formed this family,” Del Giorno said. “And I knew, just by the demographics of people who go to ballroom dance studios regularly, they tend to skew a little bit older. I saw the emotional benefits of the ballroom dancing classes, as well as, of course, the physical benefits.”

Del Giorno also worked with Rhythm Break Cares, an organization that seeks to improve the quality of life for seniors with dementia through music, movement and touch. During this time, Del Giorno said, the organization was participating in a study led by the Albert Einstein College of Medicine in Morris Park, looking at how ballroom dancing affects cognitive function for people with dementia.

Del Giorno also did her own research, finding out that ballroom dancing is the only art form that aids in positive brain function. It’s especially helpful with warding off dementia, she added.

While all these events contributed to the inception of Silver Shoes, it was really the story of Del Giorno’s mother having trouble affording ballroom dance classes that pushed her to launch the group.

“Being a Bronx resident, I knew that most of my neighbors could never afford these incredible benefits,” Del Giorno said. “And I was looking for ways to be able to focus just on seniors, and adults over 65, and provide them with free ballroom and Latin dance — social dance classes.”

To get her dance classes off the ground, Del Giorno received a grant from the Bronx Council on the Arts in 2019. She started hosting dance classes outdoors in Parkchester and quickly found them to be a success. Because the Bronx has a great need for senior-focused programming, Del Giorno said she wanted to expand Silver Shoes to other neighborhoods.

But then Del Giorno hit an all too familiar stumbling block — the coronavirus pandemic.

“Yay, socially dancing in a socially distant world,” she said.

Like many, Del Giorno quickly adapted to the “new normal” and started offering remote classes. At first, she was resistant to switching to online classes because she felt physical interaction was a central part of what made Silver Shoes an effective program. As time went on, however, she began to see her online dance courses also had real benefits for her students while they were isolated during the months of lockdown.

“What happened was, especially during the highest sadness of the pandemic, they looked forward to coming to class to see each other,” Del Giorno said. “Even neighbors who couldn’t see each other.”

Silver Shoes has had a positive impact on her students, Del Giorno said. For instance, one man started attending her Woodlawn class a couple of months after his wife died. He formed a friend group with other students, and now they often get coffee after classes.

One of those students is Mary Ann Waygan. She moved to the Bronx from Cape Cod last year because she was looking to form new social connections after her husband passed away.

“It was like having a door opened when everything was shut,” Waygan said. “We have really made great friendships. Not only the physical activity, but the social and emotional contacts are terrific.”

According to Brigid Allyson, another Silver Shoes student, the physical and mental benefits of the program are also nothing to sneeze at.

While Del Giorno plans to continue funding Silver Shoes through grants for the foreseeable future, she wants to shift to a sponsorships financing model in the long-term.

And even further down the line she wants social dance to be “recognized as something that is good for emotional, mental and physical wellness,” Del Giorno said. “And to be funded either by Medicare plans or health insurance companies that want to really contribute positively to our society, which is aging very quickly.”