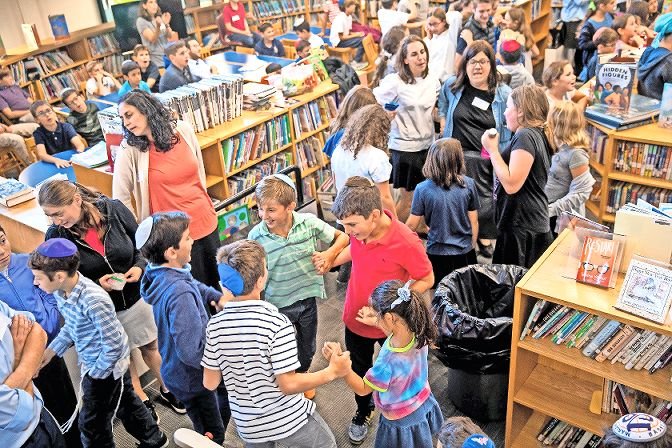 Students and faculty dance to music during an assembly meant to inspire hope and united after a turbulent week at Salanter Akiba Riverdale Academy. Local Jewish leaders came together to offer their support to the SAR community as it grappled with the news that former associate principal Jonathan Skolnick was arrested for charges related to child pornography.
JULIUS CONSTANTINE MOTAL 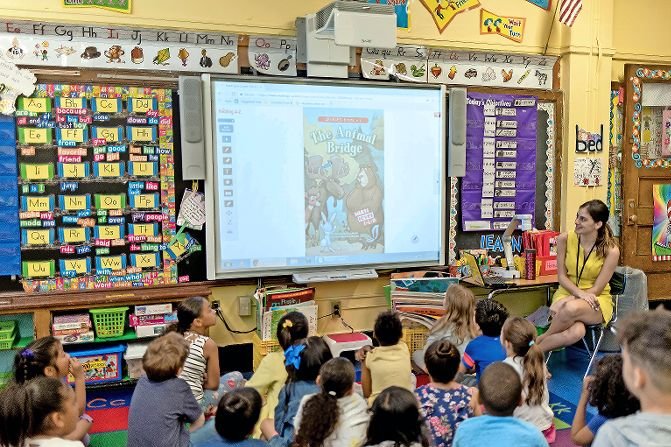 Alyssa Garraffo, a first grade teacher at P.S. 81, demonstrates showing a lesson on a smart board, an interactive display that allows teachers and students to work on in-class activities and lessons without wasting markers. P.S. 81 holds several parents association fundraisers throughout the year to help purchase materials for students. 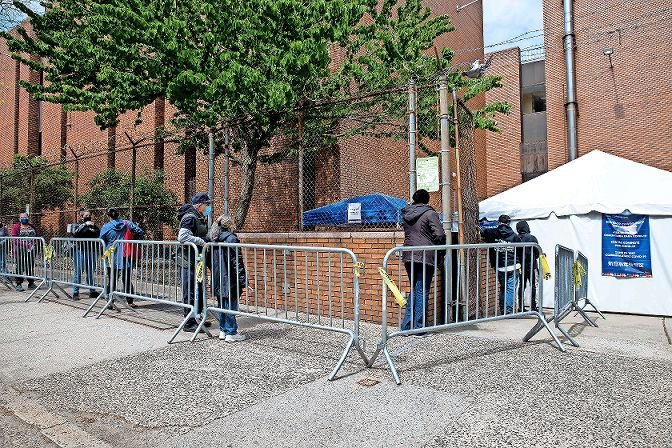 Testing is crucial in turning the tide against the coronavirus that causes COVID-19. Newly released case numbers by ZIP code show a high number of positive cases in 10471 and 10463, though Councilman Andrew Cohen is taking the data with a grain of salt given how quickly things can change.
JULIUS CONSTANTINE MOTAL / File 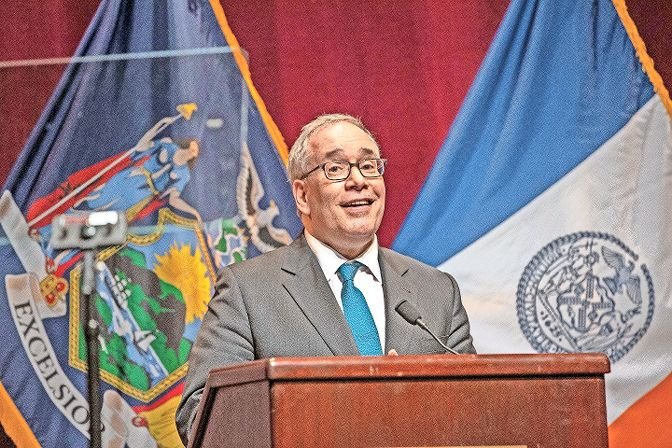 City comptroller Scott Stringer thinks the city made the right call lowering the positive test rate threshold compared to the rest of the state before reopening schools. Last month, his office released a report detailing necessary measures he says schools would need to take in order to reopen safely in September.
EIAN KANTOR / File
Previous Next
By ROSE BRENNAN

Rabbi Tully Harcsztark probably didn’t think much of the 6 a.m. phone call he received last March. Little did he know it would herald the beginning of an unprecedented public health crisis that would ultimately close down the state.

On the other end of the phone was a parent with bad news: One of his students at Salanter Akiba Riverdale High School tested positive for the virus that causes COVID-19. And as its principal, he made a decision he never thought he would have to make: Harcsztark closed the school down.

Now, more than six months later, that same school — and schools across the city — are itching to reopen for the fall. But are they ready?

That won’t stop schools from opening, because New York’s positivity rate has hovered around 1 percent since the beginning of summer. Still, that decision was a good one by the mayor, at least according to Eric Dinowitz, a city council candidate and a schoolteacher himself.

“I would hope it’s because they understand that we (have) a very … diverse, dense population where there’s less chance for error,” Dinowitz said.

The city’s positive test rate is a promising sign for schools to reopen next month. But anxiety about returning remains high, especially in the Bronx.

During the pandemic, the borough consistently had one of the highest positive test rates across the city. And though coronavirus cases in the city are largely under control, as of Aug. 9, the Bronx is the only borough with a positive test rate above 1 percent.

And, according to Dinowitz, this discrepancy could spell trouble once schools begin reopening.

“While the city average could stay below 3 percent, the rate in the Bronx could rise above 3 percent,” Dinowitz said. “We see the Bronx is often the hardest-hit. We are far behind when it comes to health indicators.”

City comptroller Scott Stringer has the unique perspective of both a city official and a parent. His two children also will return to school next month, and he himself is no stranger to the anxiety parents are facing nationwide regarding sending their kids back to school.

“I’m feeling this not just personally, but also throughout the city as we talk to parents about how to return safely,” Stringer said.

Now that Cuomo has given the go-ahead to reopen, it’s up to de Blasio to make more concrete decisions regarding exactly how — and if — that will be done. And the clock is ticking as September draws closer.

“We need leadership and decisiveness,” Stringer said. “The mayor took too long to close the schools, and he’s taking too long to come up with a plan that sufficiently answers the question.”

Leadership and decisiveness are exactly what SAR implemented in its reopening strategies. Administrators there are relying on a few of the city’s proposals — and they’re adding a few modifications of their own.

That’s because administrators know SAR will not look the same as it did before the pandemic. And they brought on two architects to make renovations that would make the schools safer.

According to Hila Stern, one of the architects in charge of the SAR renovations, there were several factors to consider. While the goal was to make the schools safer, Stern didn’t want to make any permanent changes that wouldn’t also be beneficial post-pandemic.

“Even though we’re doing them now because (of) recommendations we got for the pandemic — for example, upgrading the HVAC system or upgrading the bathrooms — all of the things that we’re changing in the building are things that we think are actually going to be very effective in the long run,” Stern said. “We’re investing in something that we actually think will better the school even after, hopefully, we get out of this situation.”

How SAR’s students will learn depends on their grade level. For children in the nursery and elementary school, there will be no remote instruction at all. Groups of younger students will be spread throughout the building to maintain physical distancing.

“The idea was to create small pods with students in small groups of about 15 who spend the entire day together with two teachers,” Harcsztark said. “In the perspective of being able to monitor, we do contact tracing and try to mitigate interaction and keep them in small groups.”

At the middle and high school levels, remote learning becomes more necessary. Not only are the class sizes larger, but the students require more specialized instruction that can’t be provided by just two teachers.

SAR’s mantra regarding reopening is “radical flexibility.” Rather than taking a wait-and-see approach, the goal from the beginning was to have a solid reopening plan in place, and to adjust it as needed.

“We’re planning on the go, but being very thoughtful about the staff’s safety, about the students and the parents’ anxiety, and trying to always reflect on that,” Stern said. “The tweaking is the radical flexibility. We’re always trying to make the changes as we get more and more information.”

From the beginning of the pandemic, Harcsztark was invigorated by the collaborative attitude of the SAR community. He feels because of its community, reopening SAR became more viable.

“It’s not going to be perfect,” the rabbi said. “But it makes all the difference if you’re doing it with people who … are trying to work together and make it work.”