With future in doubt 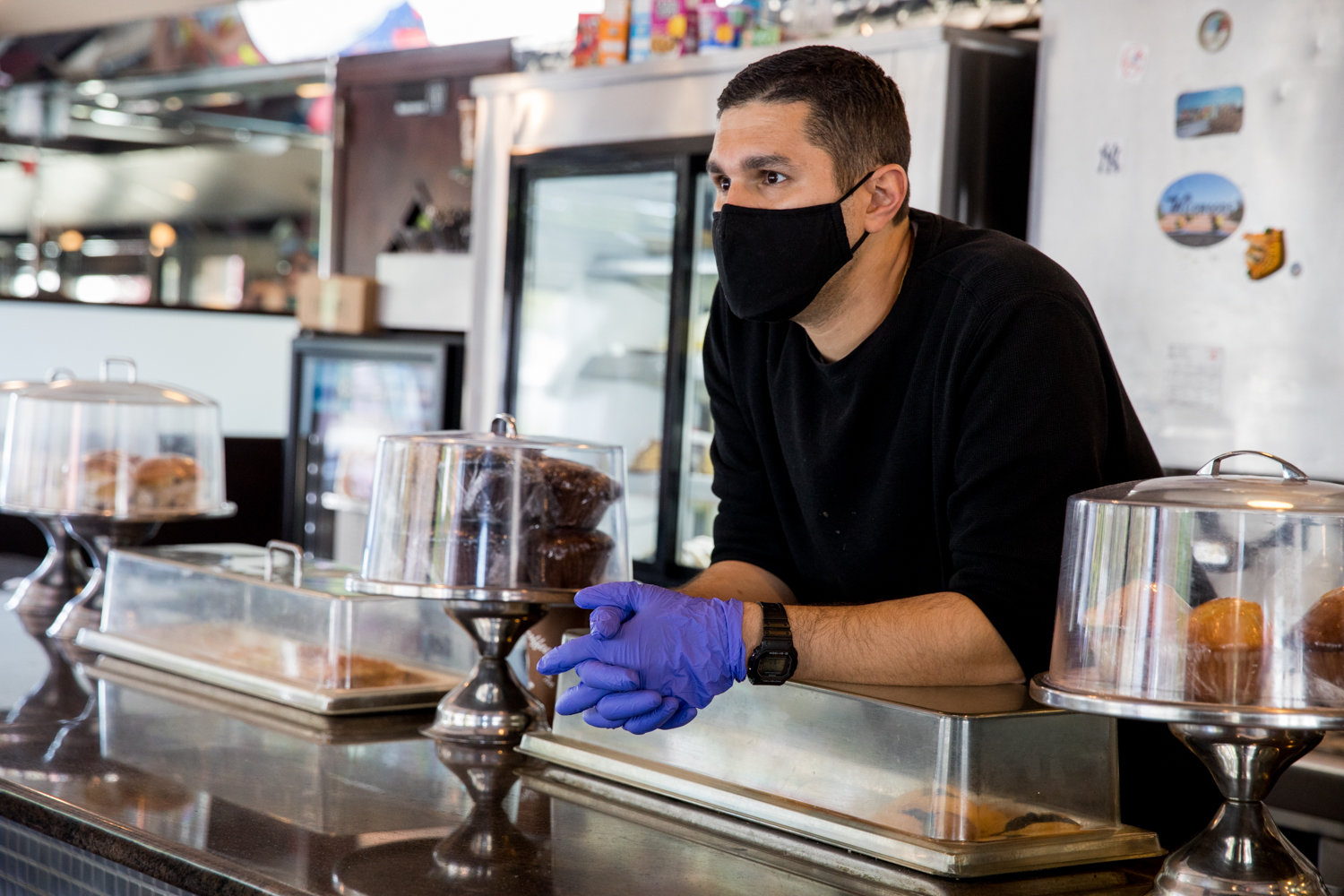 Nick Diakakis looks out from behind the counter at Tibbett Diner, which has been struggling in the face of the coronavirus pandemic. While it has reopened for takeout and delivery, business is not what it used to be.
JULIUS CONSTANTINE MOTAL 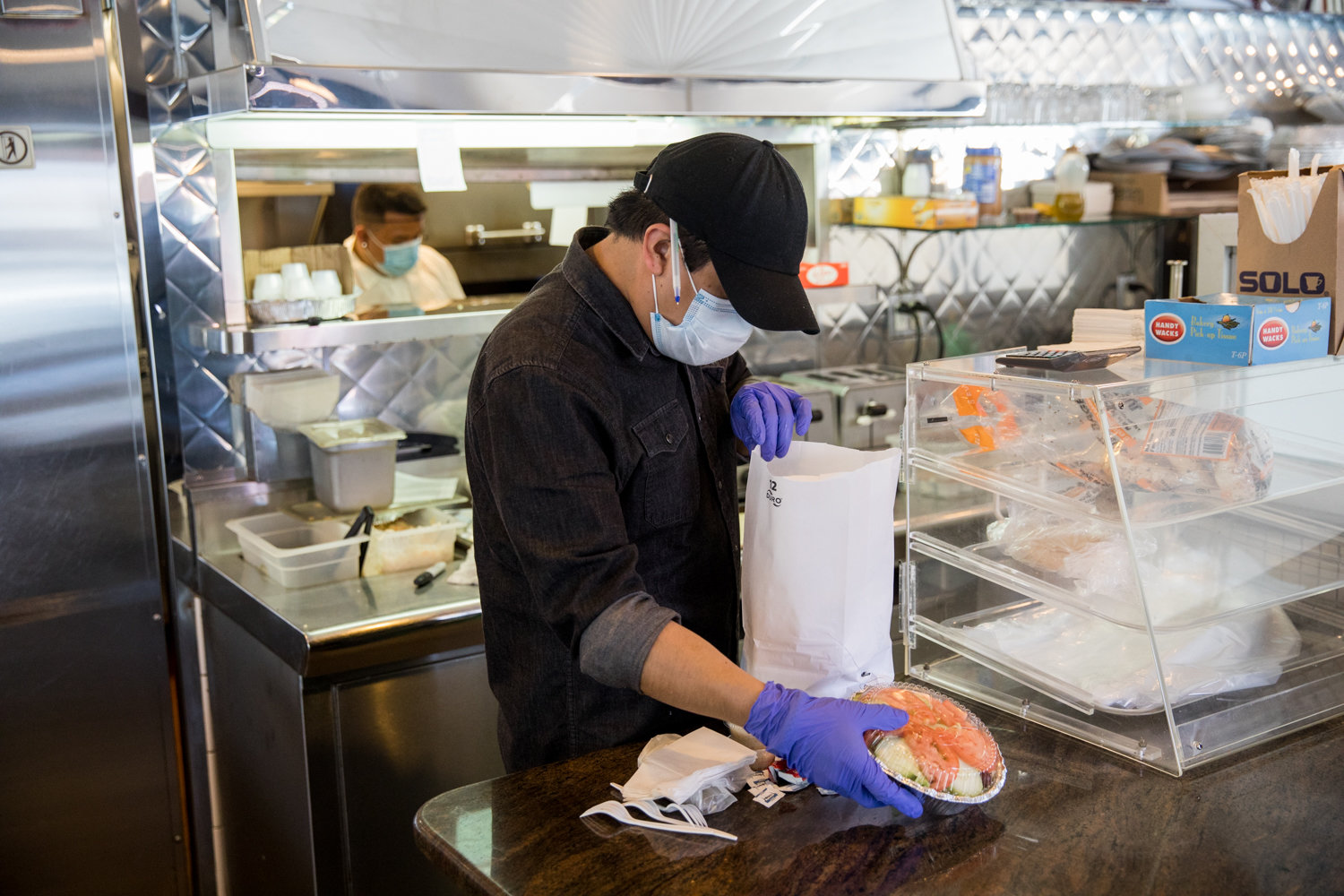 A worker bags an order at Tibbett Diner, which, like many small businesses, has suffered as a consequence of the coronavirus pandemic.
JULIUS CONSTANTINE MOTAL 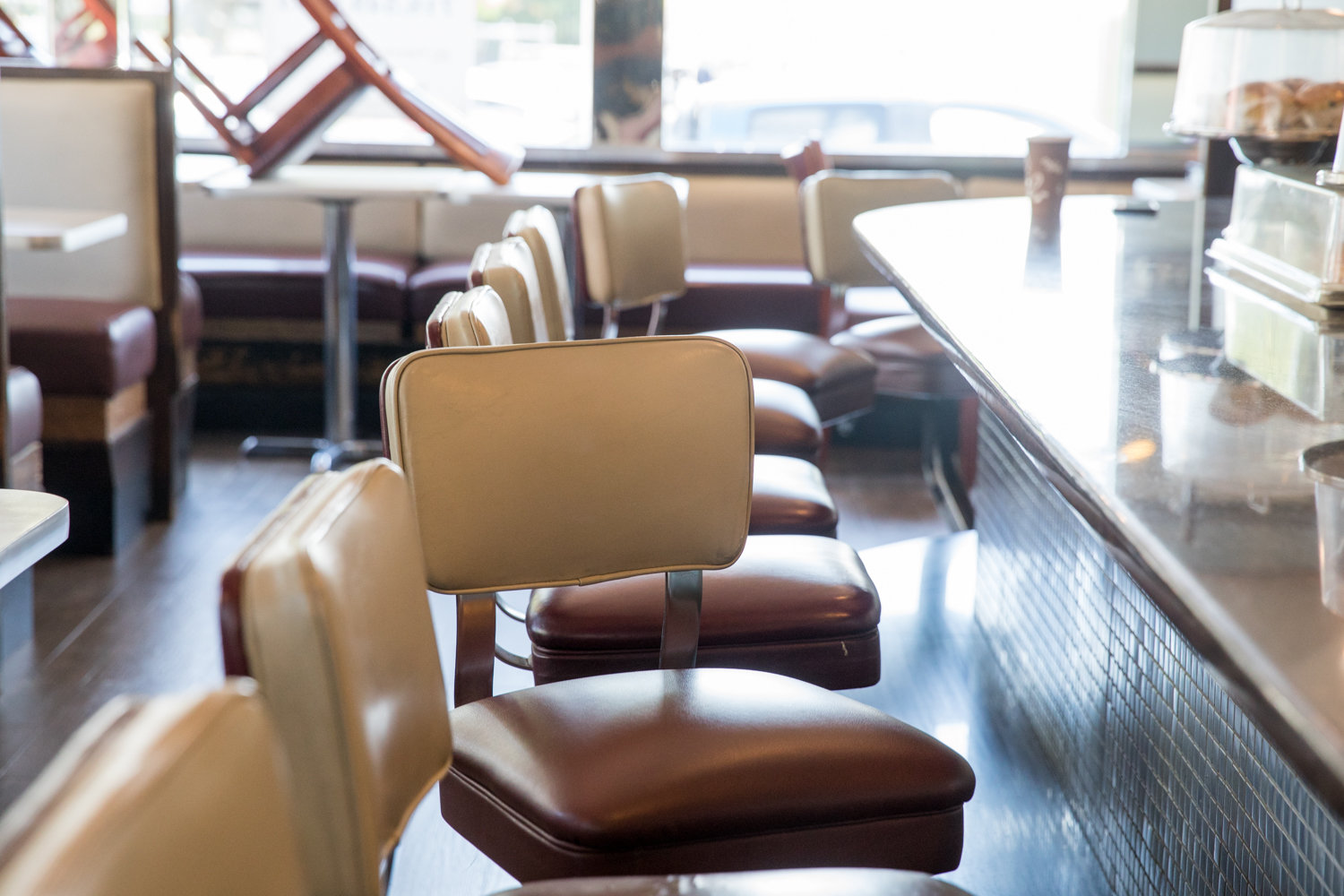 Seats remain empty inside Tibbett Diner, an eatery that has been featured in many television shows and films, which is now clinging to life as business has plummeted during the coronavirus pandemic.
JULIUS CONSTANTINE MOTAL 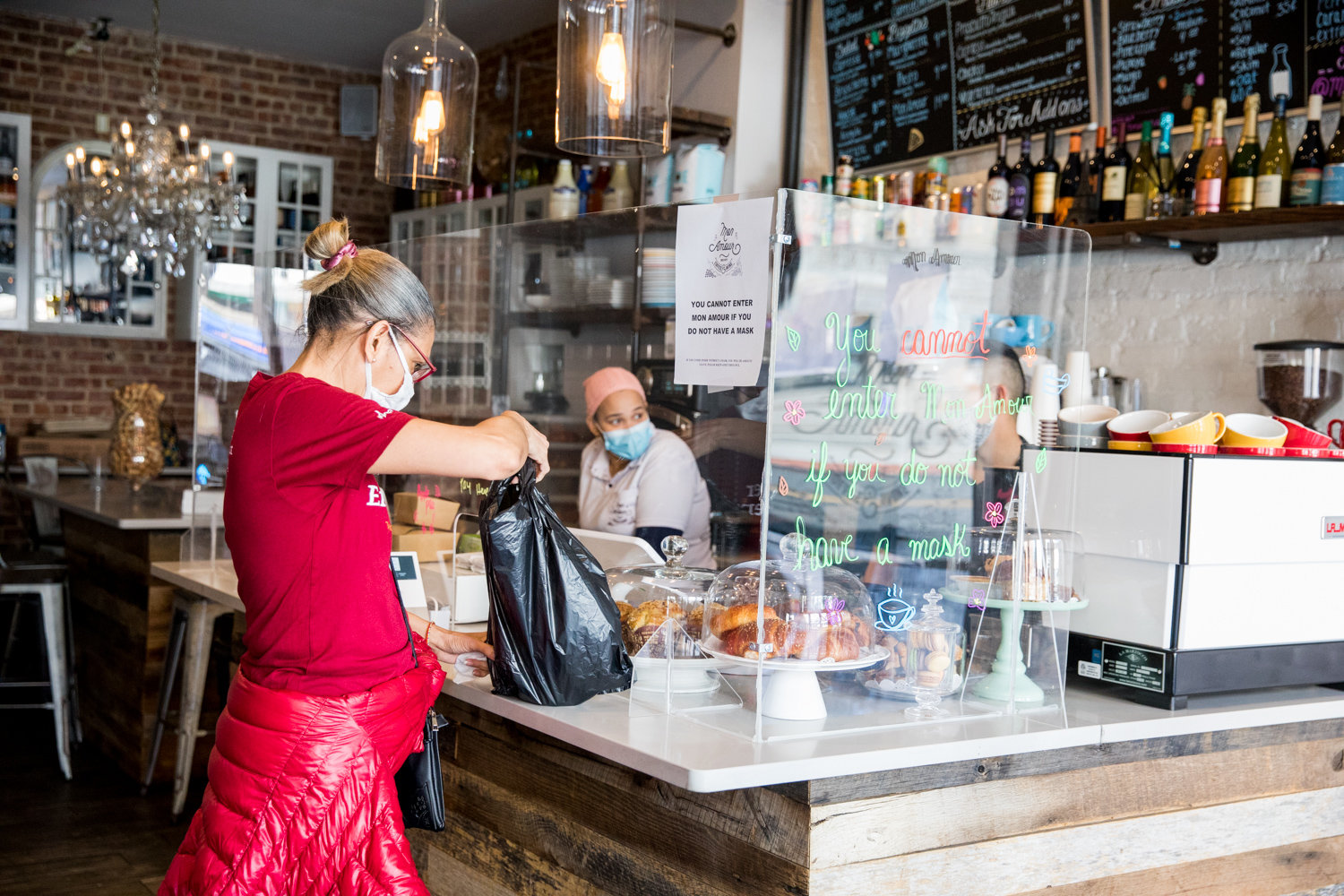 A customer picks up an order inside Mon Amour Coffee and Wine, a cafe on West 238th Street, which was closed for nearly two months following the statewide shutdown in response to the coronavirus pandemic. The cafe has since reopened, but business has been slow.
JULIUS CONSTANTINE MOTAL 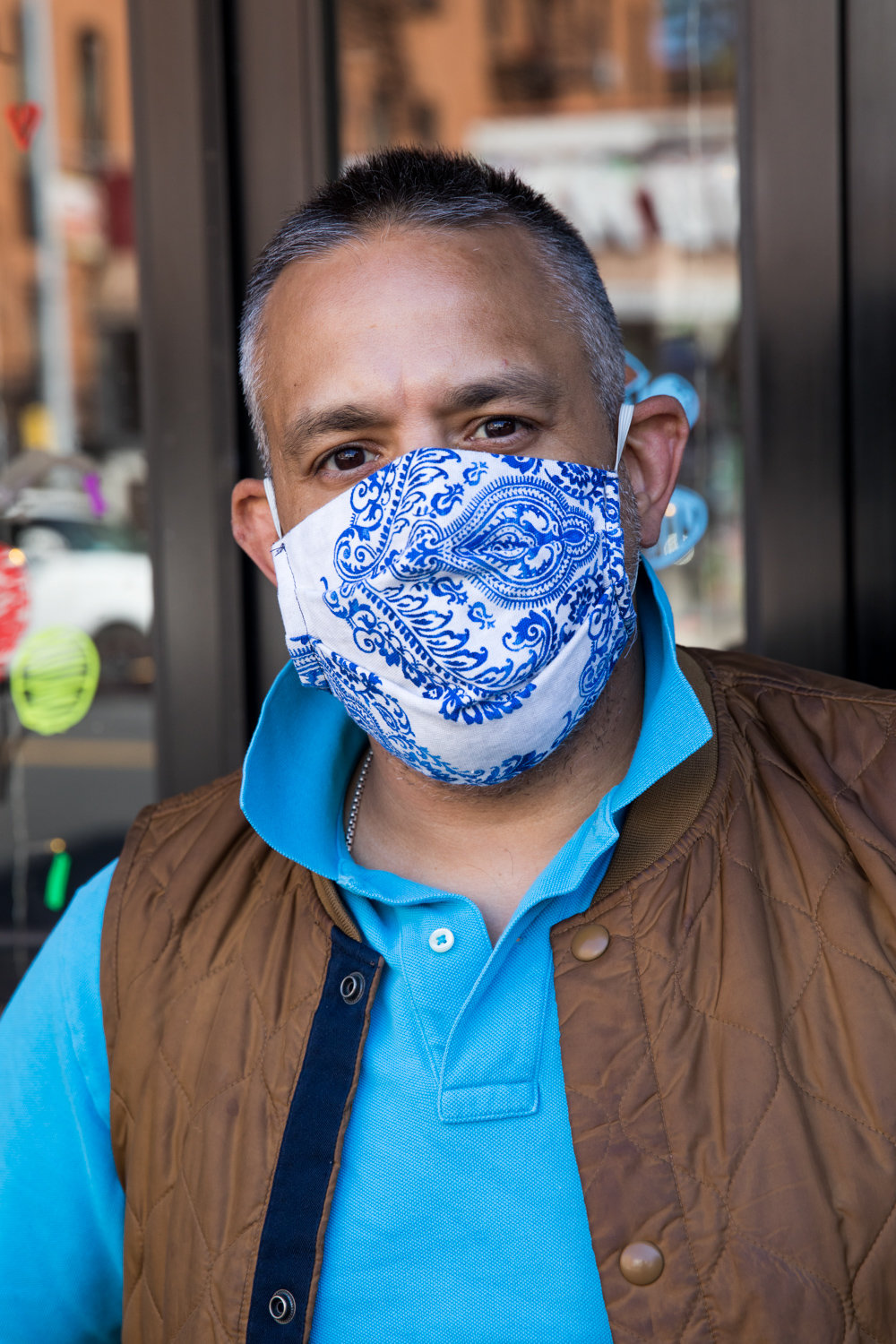 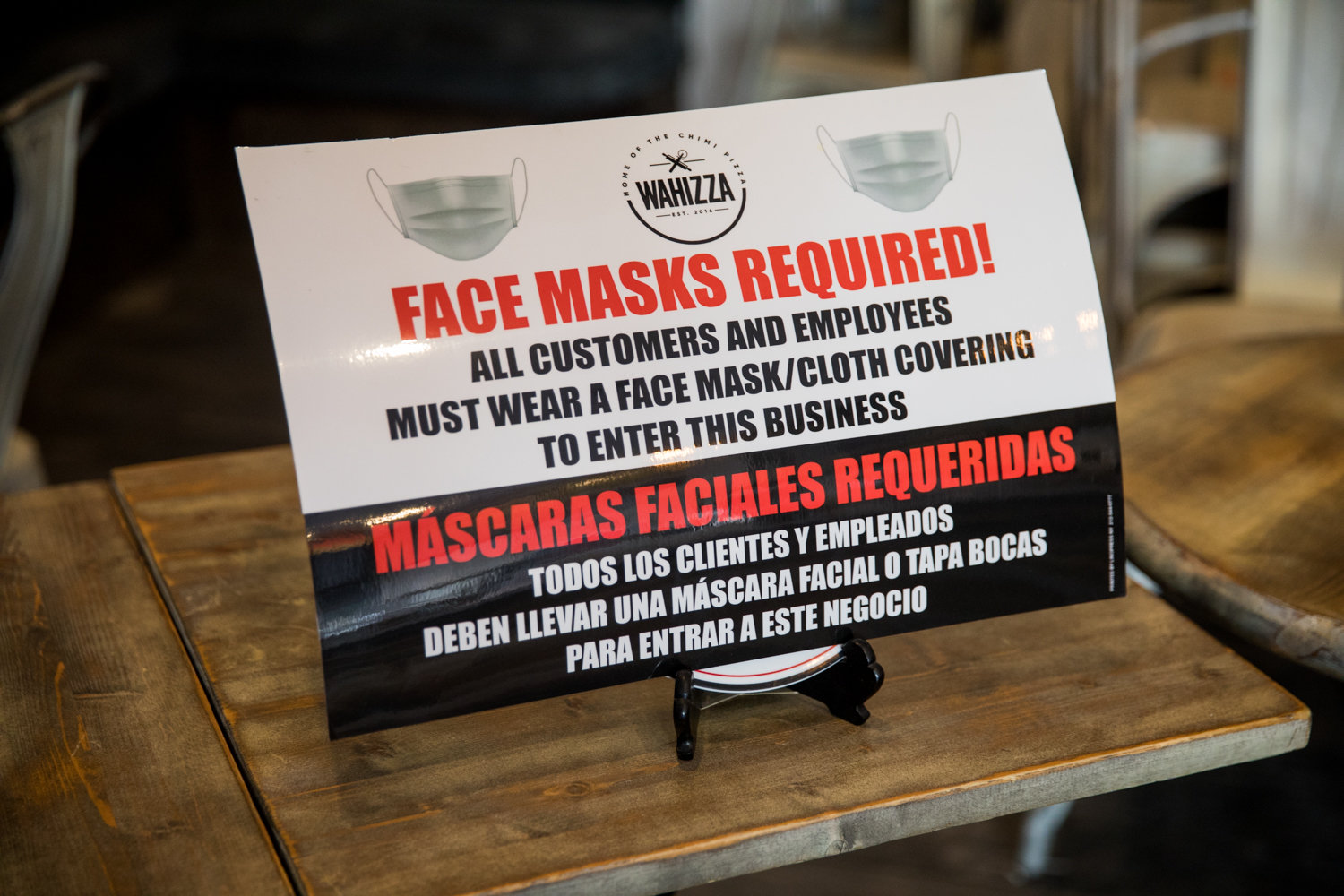 A sign informs people that masks are required inside Mon Amour Coffee & Wine as a result of the coronavirus pandemic.
JULIUS CONSTANTINE MOTAL 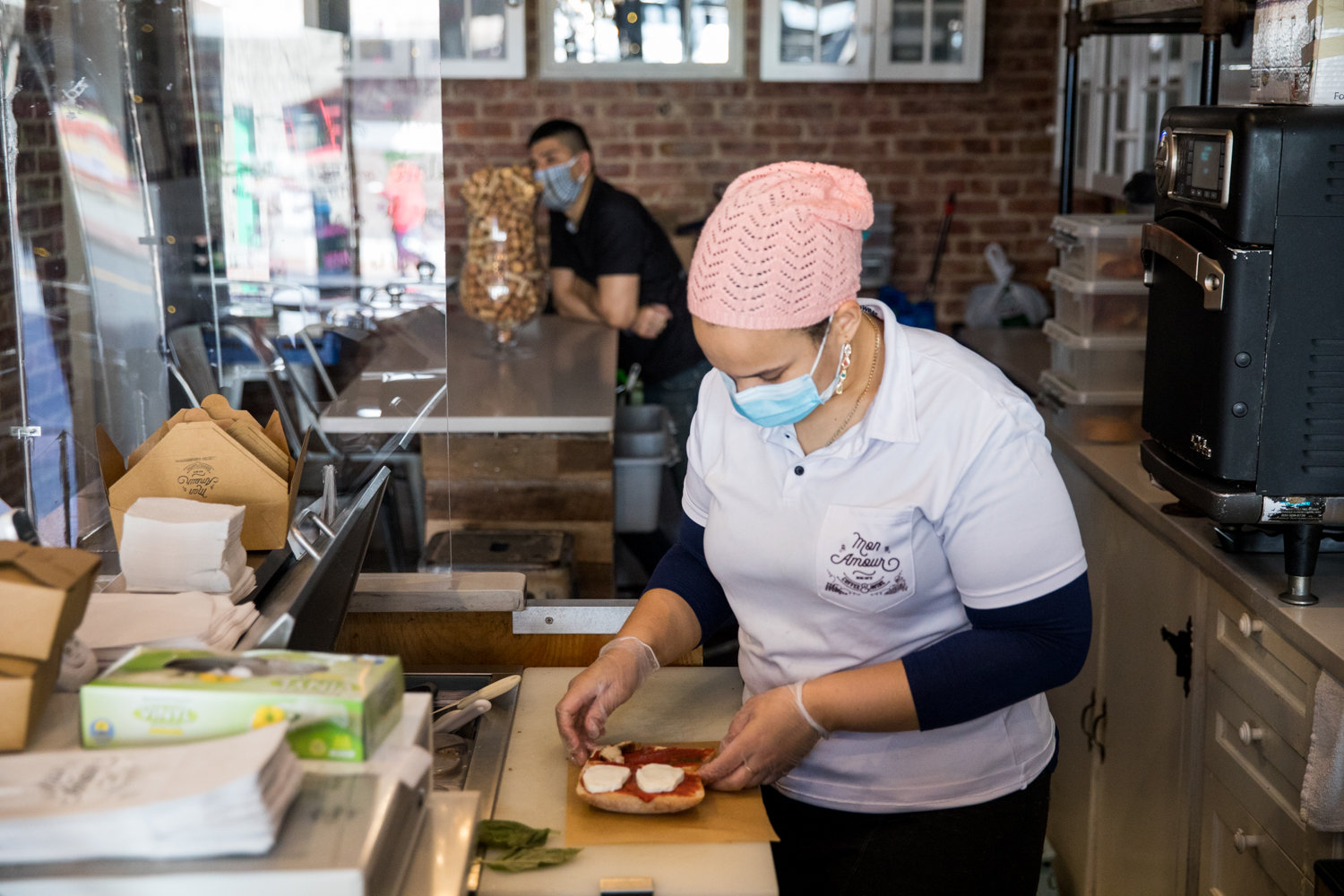 Yolanda Almonte prepares a sandwich inside Mon Amour Coffee & Wine, which was closed for nearly two months following the statewide shutdown as a result of the coronavirus pandemic.
JULIUS CONSTANTINE MOTAL
Previous Next
By ANTHONY CAPOTE

When Jeff Garcia retired from the New York Police Department in 2015, he wanted follow his passions by starting his own business. Of course, doing that was easier said than done. But after Garcia brainstormed with one of his former partners from his cop days, they settled on two passions virtually everyone has in common: coffee and wine.

Mon Amour Coffee and Wine was born at 234 W. 238th St., an establishment offering customers high-end brews by day, and a selection of fine wines by night. Throughout the day, Mon Amour offered breakfast and lunch options like Le Jeff, a pretzel croissant sandwich with ham, Gruyère cheese and red onions, which Garcia says is very popular.

But that all changed, of course, after the coronavirus pandemic swept across the United States, hitting the Bronx particularly hard. Now Garcia, who made his home in Riverdale for a while before moving to Piermont in Rockland County, says he has lost close to 90 percent of his regular business. Unlike some restaurants across the city, Mon Amour cannot even offer delivery services for its customers, leaving the business instead to rely on diehard patrons to come get their coffee and sandwiches to go.

“We closed for almost two months and it’s been difficult,” Garcia said, although Mon Amour did reopen earlier this month.

“Customers were really happy. They missed us. But you know, it’s still obviously very, very slow.”

Garcia’s experience is not unique. Mom-and-pop shops across New York have suffered immensely since Gov. Andrew Cuomo issued statewide stay-at-home orders last March. But while government officials at the federal, state and local levels debate over how and when to begin reopening the economy, small businesses like Mon Amour — especially in the Bronx — have taken a tremendous hit.

So hard, in fact, Mon Amour is not alone when it comes to making just a fraction of what they did before the pandemic. The city’s public advocate, Jumaane Williams, told city council members last week that earnings for small businesses workers in the Bronx had plummeted 90 percent within a month of the shutdown. That’s worse than any other borough, Williams said, compared to 67 percent reductions in Manhattan, and 59 percent in Queens.

It’s a major reason why Williams was fighting a proposed budget slashing of the city’s small business services department, which could cost it more than half of its funding.  Yet, the cuts are necessary, according to Mayor Bill de Blasio, who sought even before the pandemic to reducing the small business department’s budget from more than $397 million to just $161 million in the coming year.

“If we do not save our small businesses, the consequences could be catastrophic,” Williams said, according to his written testimony. “Our mom-and-pop shops and other cherished businesses that have been the fabric of this city for years — if not decades — might be gone. Closures of businesses would lead to further tax revenue declines. Workers may lose their financial stability, if they haven’t done so already.”

In light of the current circumstances, Williams says there’s no justification for cutting off the ability of small business services department to help locally owned stores and restaurants. The cuts were especially heinous, Williams added, in the face of a fiasco last month when the city made a $10 million grant available for small businesses, with less than $100,000 of it finding its way to the Bronx.

“I am still speechless from the hearing last month when the former commissioner reported only 1 percent of businesses in the Bronx received city grants, while the majority were allocated to businesses in Manhattan,” Williams said. “It is my understanding SBS is no longer offering this financial support, and is instead encouraging small businesses to apply for the federal government’s loan programs. Obviously, this cannot be viewed as enough.”

The discrepancy in financial aid given to the outer boroughs sparked outrage from some small business advocates in the Bronx like Rob Walsh, who sits on the board of directors for the Bronx Chamber of Commerce.

“It doesn’t get more embarrassing,” said Walsh, a former SBS commissioner who is now a senior advisor to Manhattan College president Brennan O’Donnell.

“Now how in God’s name do you give out $10 million and no one is opening the faucet and shutting it a little bit and saying, ‘OK, we just gave $2 million. What are the trends? Who is getting it? Where’s it going?’”

But the de Blasio administration has at least put some effort into identifying a solution. Earlier this month, the mayor convened his Small Business Advisory Council, a group that includes Mon Amour’s Garcia. Garcia hoped he could represent eateries like Mon Amour in finding a new sense of “normal” without relying too much on government handouts.

“If I had to open right now and keep social distance recommendations — six feet and things like that — I can fit 15 people, at best,” Garcia said. “And most businesses, from what I hear — especially in our industry — if they can’t open up a full capacity, even after (the Paycheck Protection Program), will have to lay off their employees again because they’re just not going to be making the revenue.”

Stretched to the limits

Nick Diakakis is one such businessman. He’s part owner of Tibbett Diner, a decades-old staple on Tibbett Avenue near West 231st Street. He has applied twice for the Paycheck Protection Program — a federal program providing funds to keep people employed and fully paid. Yet, he was denied the first time, and never even heard back in the second round.

“Even if they say we can open up at 25 percent, it wouldn’t benefit me in the slightest to do it,” Diakakis said. “It’s not going to make that much of a difference at that point, you know?”

There are some ideas floating around from the first two meetings of the small business advisory council, Garcia said, including making use of the city’s open streets program, intended to close off streets during the day so neighbors have outdoor room to practice social distancing during the pandemic.

These closed streets could also double as dining space for restaurants who cannot afford to open at just 25 percent capacity, Garcia said. The problem in the Bronx, however, is the borough is home to just a little more than three miles of open streets, according to data from the city’s transportation department. In the northwest Bronx, only one block in Kingsbridge has been shut down.

Garcia has proposed some other ideas, including a plan to either place caps on commercial rents, or incentivize landlords and Con Edison to cut back their own rates.

The big point Garcia wanted to drive home was that for New York’s small businesses to survive, everyone needs to do their part to help in the recovery process.

“I use this word all the time, or the phrase, ‘everybody should have skin in the game here,’” Garcia said. Yet, “it doesn’t seem like that is necessarily a top priority.”