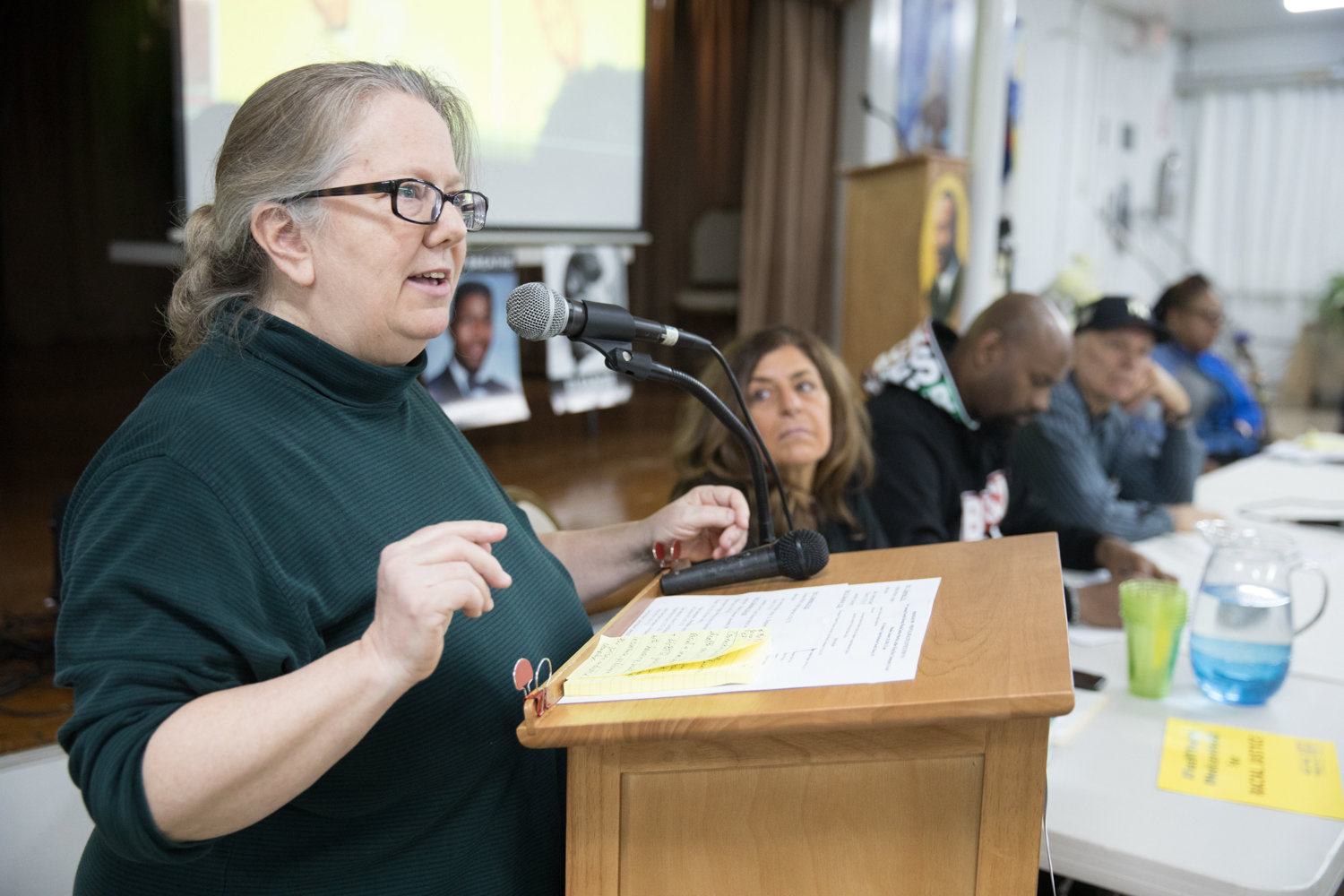 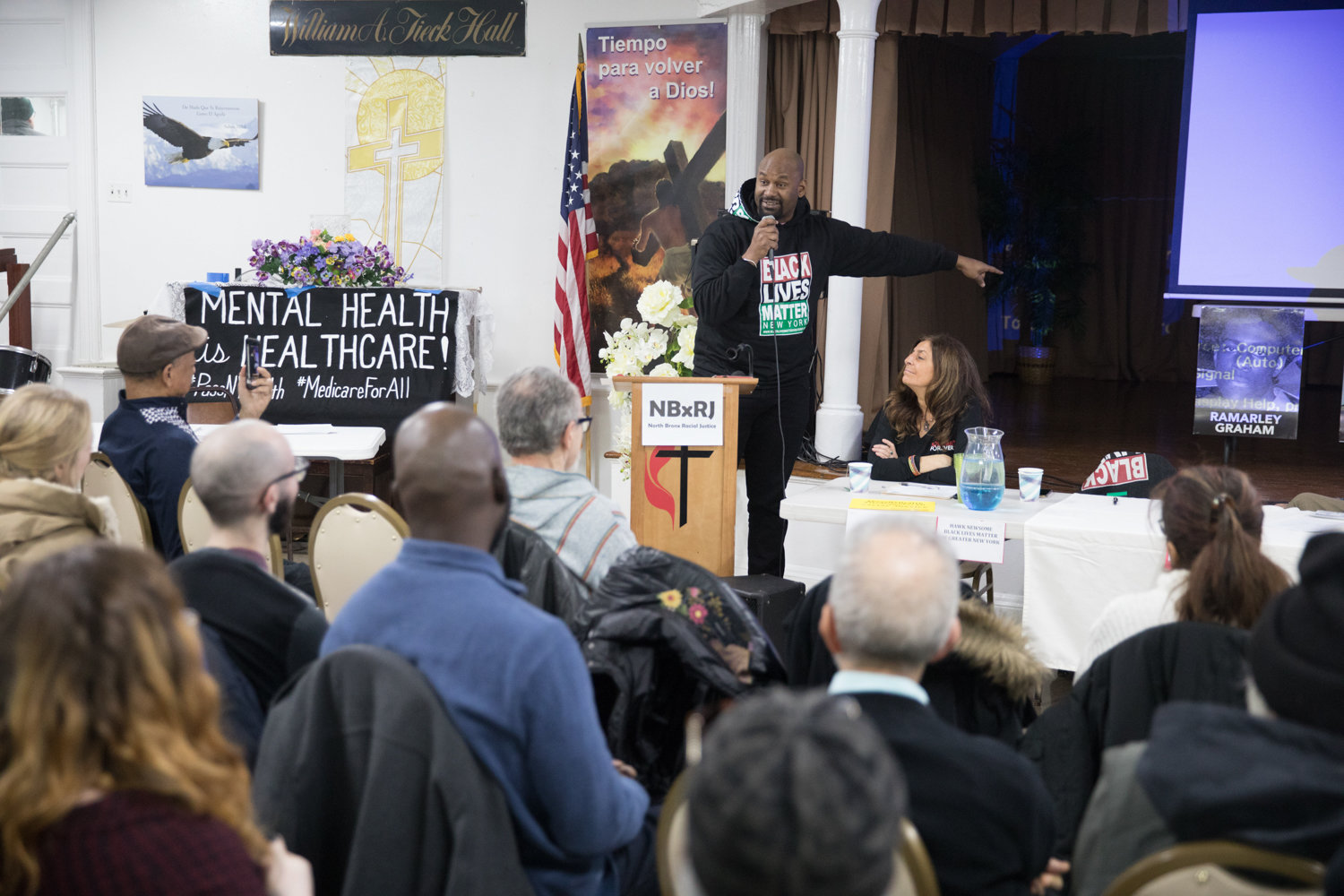 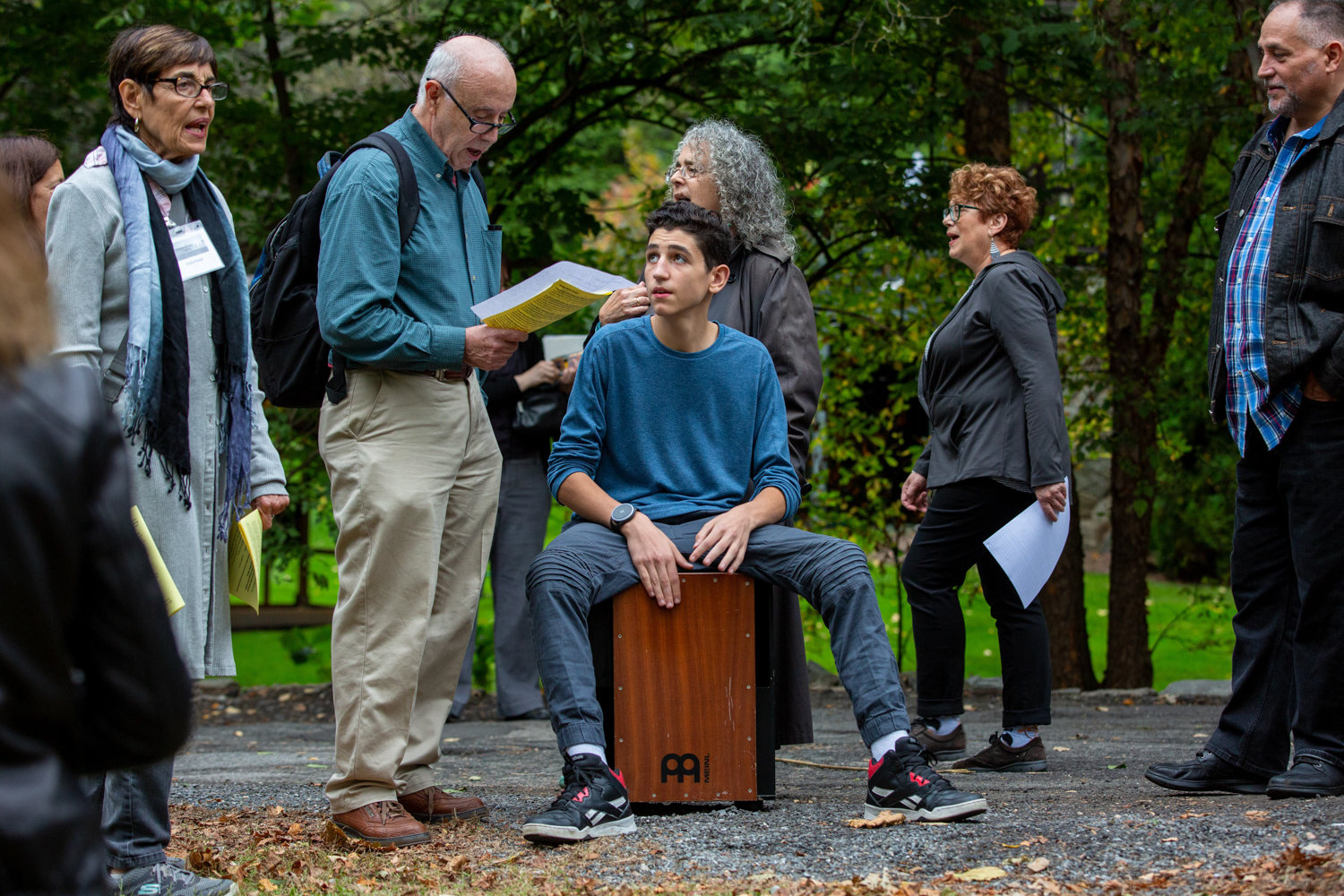 Adam Cabo drums as congregants sing ‘If I Had a Hammer’ and ‘Olam Chesed Yibaneh’ next to Delafield Pond during a Tashlich last year, a ceremony between Rosh Hashana and Yom Kippur. Bend the Arc and the Interfaith Clergy Conference of Riverdale, Kingsbridge, Spuyten Duyvil and Marble Hill held the event to call attention to the plight of asylum seekers. Bend the Arc and other organizations have had to adapt to working online in response to the pandemic.
EIAN KANTOR / File 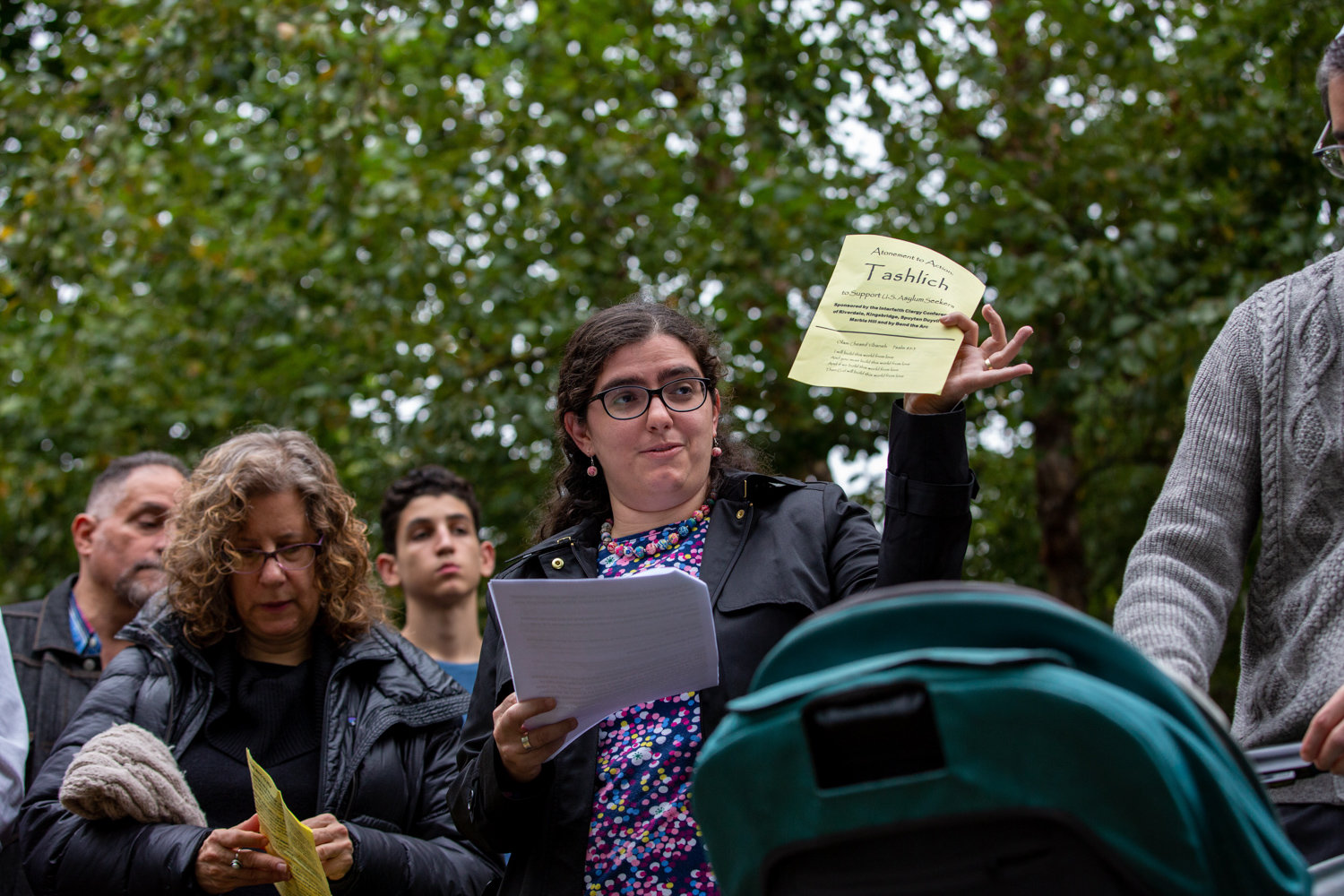 Rabbi Katie Greenberg talks about the importance of the Tashlich ceremony near Delafield Pond during an event last year organized by Bend the Arc and other organizations, all of which have now moved to online organizing in response to the coronavirus pandemic.
EIAN KANTOR / File 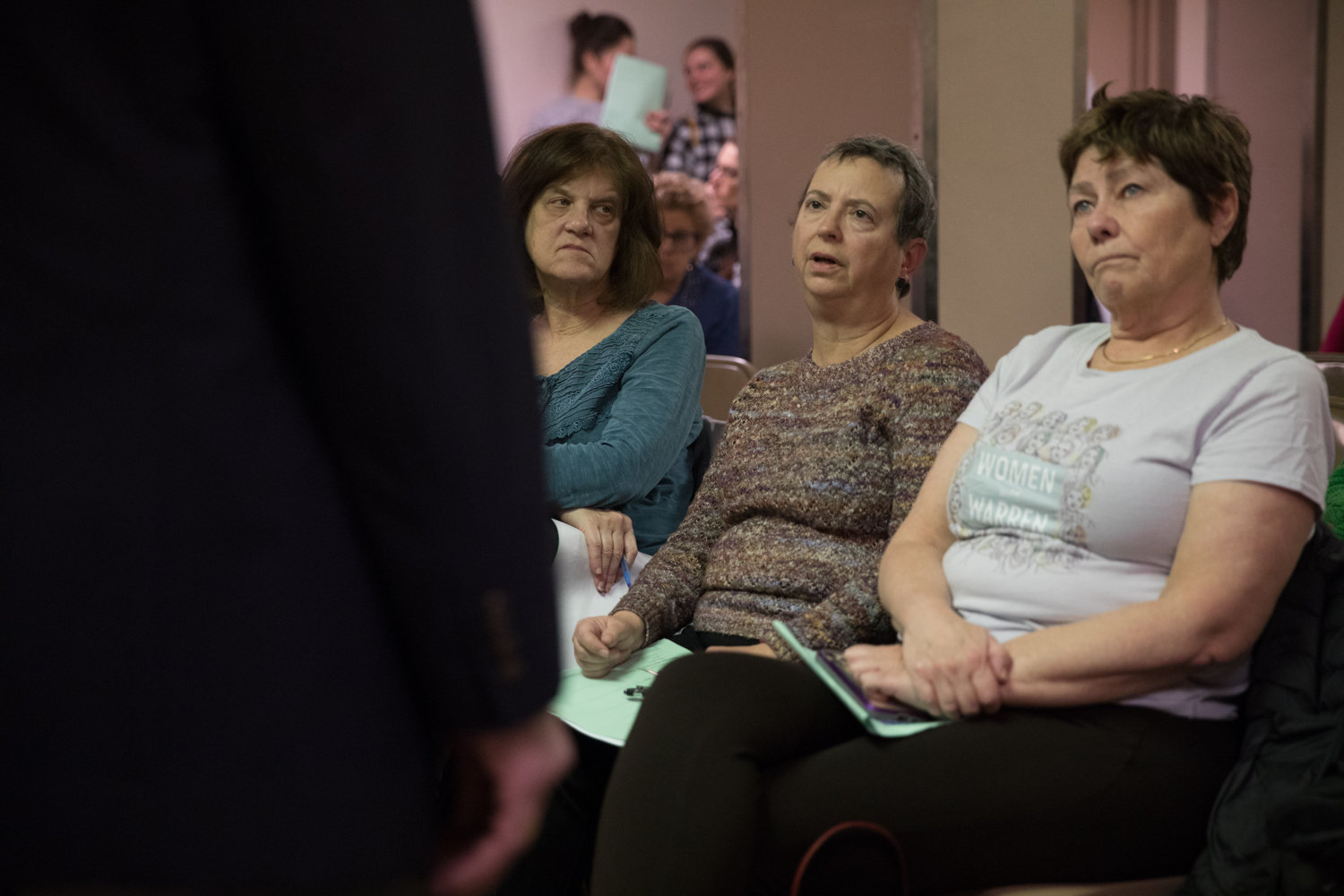 Schools, offices, and restaurants are all trying to adapt to new rules set by New York’s governor and mayor as they try to “flatten the curve” and slow the spread of the coronavirus that causes COVID-19.

There are some things that aren’t so concrete, however. While students will log into Google Classroom or attend lectures on the online conferencing app Zoom, and office workers check emails from home, there are entire movements also shifting online.

This part of the Bronx is home to quite a bit of political activity. The Northwest Bronx Community and Clergy Coalition, NYCD16-Indivisible, North Bronx Racial Justice, and more all work to make progressive change in the area.

Few people know that as well as Jennifer Scarlott, a founding member of Bronx Climate Justice and North Bronx Racial Justice. In just a few days, she has shuffled some small events, canceled a few tentative ideas, and began making long-term plans to keep activism moving as members and supporters deal with their new reality.

“We work in partnership with a lot of other groups,” Scarlott said. “So what’s really happening for both groups at the moment is that we’re sizing up the situation.”

Scarlott’s learning curve for transitioning to exclusively online has been steep. All activists, she said, are also learning how to operate in a global pandemic where congregating is not allowed, and everything must be done remotely.

“There is just a huge amount of communication going on about everything from mutual aid at a real local, neighborhood-by-neighborhood, street-by-street, building-by-building level,” Scarlott said. “To the much bigger stuff of, my God, how do we keep these fights going right now when the bad guys are all still working hard on their end?”

She’d been hopping on conference calls and Zoom chats with different organizations as they try to ensure their work is still effective and impactful, even if they can’t gather in groups larger than just a few people.

“Some of those big coalitions are really pretty well-equipped in terms of staff and financing, sending emails every day, prompting people with very specific instructions on online or phone call action that they can take,” Scarlott said.

Bend the Arc Riverdale, a local chapter of the national Bend the Arc: Jewish Action movement, canceled a March 23 rally outside state Sen. Alessandra Biaggi’s office. While there is hope to reschedule the rally, nothing is certain at this point.

The group was, however,  able to swiftly move a launch party online, member Sue Dodell said.

“We were planning to have a kickoff party tonight for our campaign that we call ‘We Rise as One,’ which is to try to remove Trump from office and kick any white nationalists out of office this year,” Dodell said of her Bend the Arc group.

“Because of the virus, we are doing a Zoom call, and we were able to really move quickly to get organized.”

Keeping people focused without in-person meetings and actions might be a challenge, but Dodell said she already had sent out about 2,000 texts just a few days into social isolation. Making phone calls and canvassing by text rather than going door-to-door and hosting Zoom calls would fill the gap, Dodell added, and she wasn’t worried about keeping up momentum in activism.

The pandemic has brought new issues into focus, and has changed some of the ways old issues are being discussed. While the rally outside Biaggi’s office has been canceled, the senator herself is still focusing on improving conditions for incarcerated people, especially on Rikers Island, which falls within the bounds of her district.

After two cases of COVID-19 were diagnosed on Rikers Island, Biaggi called for a satellite testing facility to be set up at the jail to test staff and inmates. She went a step further, too, calling for “immediate and supervised release in all possible cases for vulnerable incarcerated individuals,” including inmates who were pregnant, immuno-compromised, or have pre-existing medical conditions that would make them more susceptible to severe complications from COVID-19.

“They can’t even adhere to some of the basic principles because our jails and prisons just aren’t designed that way, were never designed that way,” said Holmes of the group that works to reduce the overall incarceration population. “They’re designed as warehouses, and there’s just no way to distance people, because there just isn’t the space to do so.”

Releasing people who have been arrested for low-level offenses and instructing police to stop arresting people for those offenses and sending them to jail could help reduce jail populations and slow the spread of the disease in jails and prisons, he said — something Mayor Bill de Blasio started doing earlier this week.

Other issues popping up include allowing homeless people to live in empty buildings, while others need a chance to suspend mortgage and rent payments, while helping to close the technology and food inequality gap in public schools, Holmes said. All of these issues need more attention, especially once the coronavirus crisis ends.

While activism is all about gathering people together, Scarlott believes the period of social distancing and trying to come up with new solutions could still be an important period for new activists.

“I think it’s also a period for people of education, of political education,” Scarlott said. “Deepening our knowledge and our skills and understanding.”