MoMath asks middle schoolers to explore the world through numbers 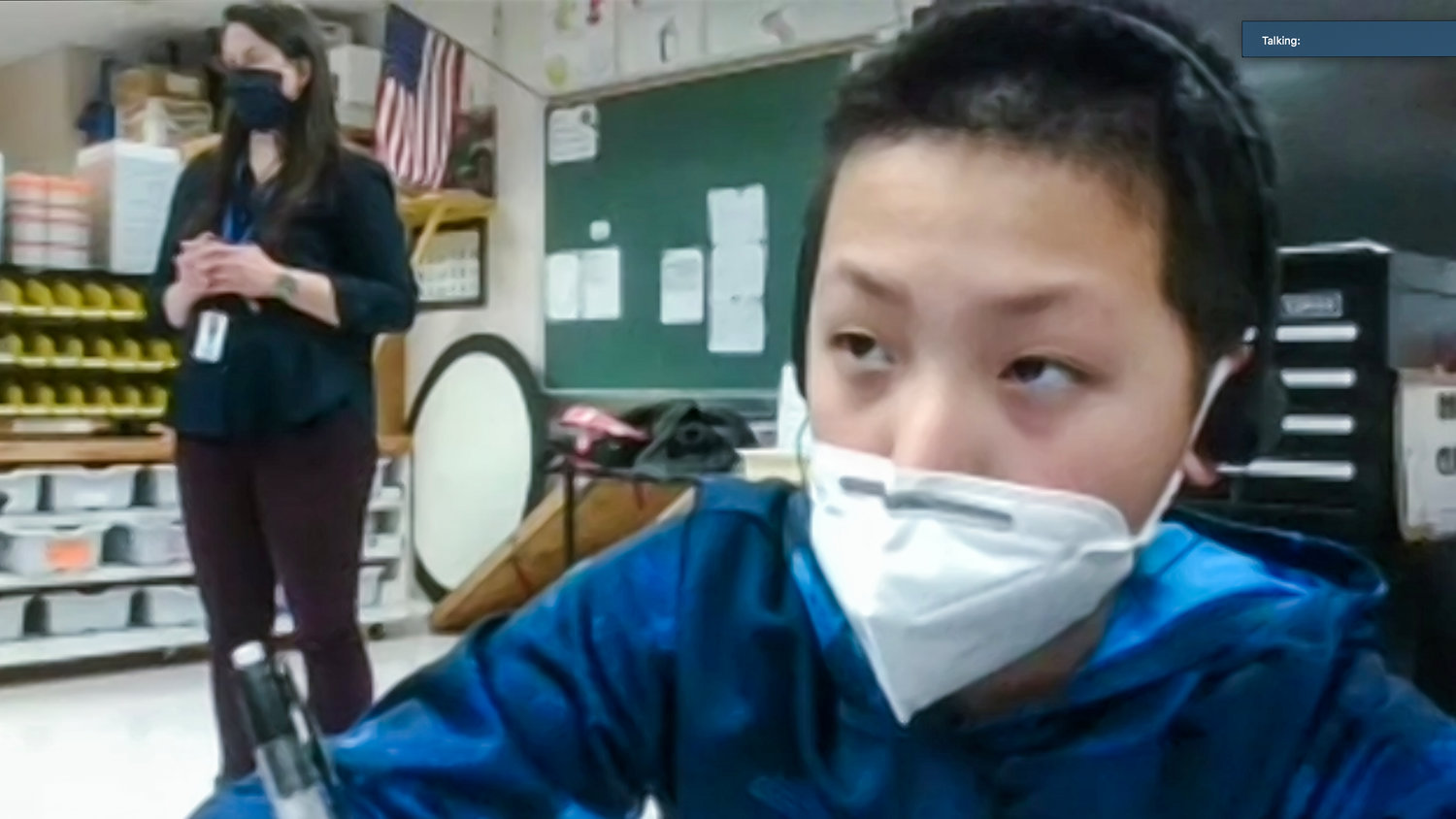 In years past, the Con Edison MoMathlon has taken place at the ConEdison building — and even more locally at the Ethical Culture Fieldston School. But this year, students competed remotely thanks to the coronavirus pandemic.
HIRAM ALEJANDRO DURÁN 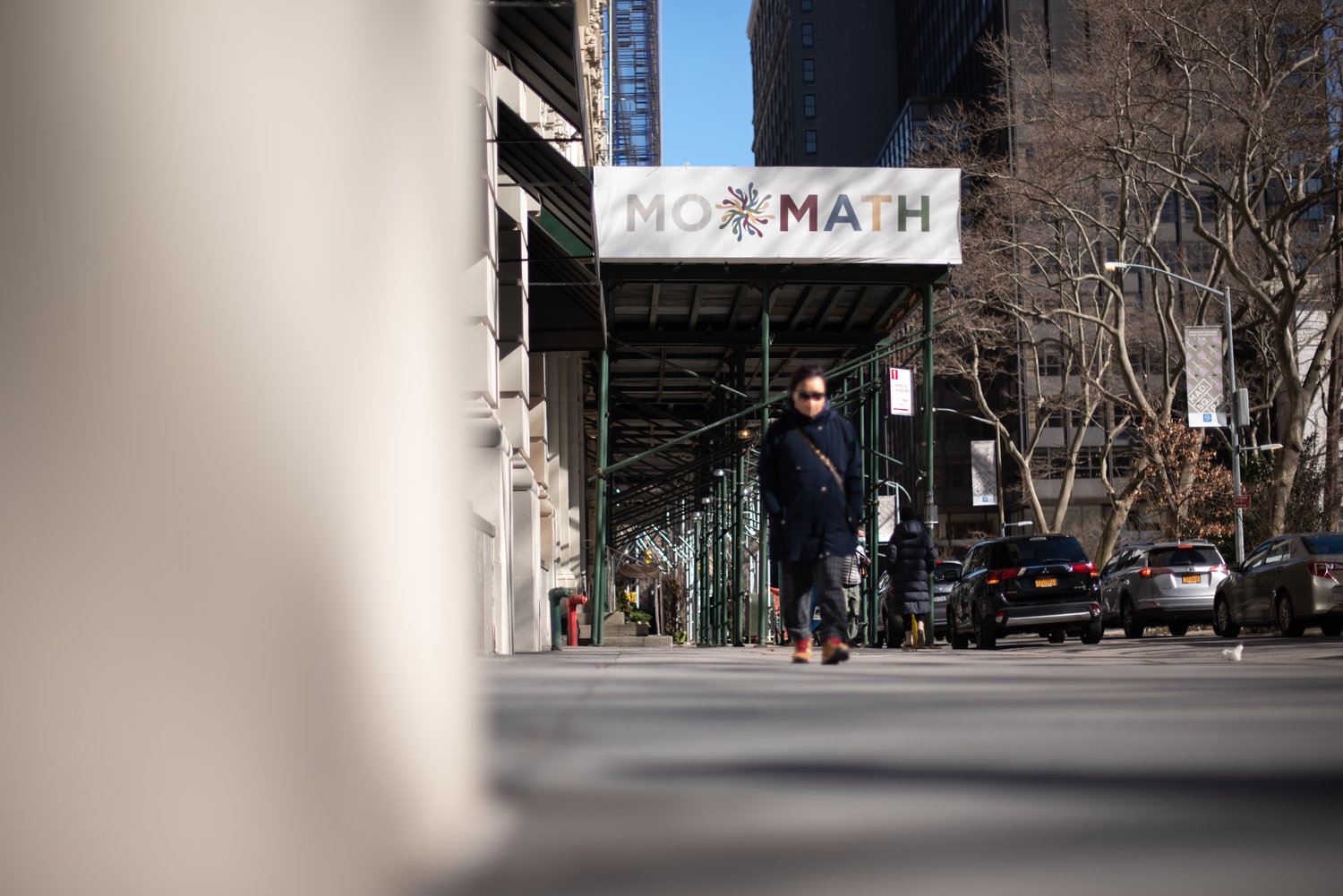 The National Museum of Mathematics hosts the annual Con Edison MoMathlon. The museum is currently closed due to the coronavirus pandemic, although it committed to hosting some of its programming — like the MoMathlon, remotely.
SKYLER REID 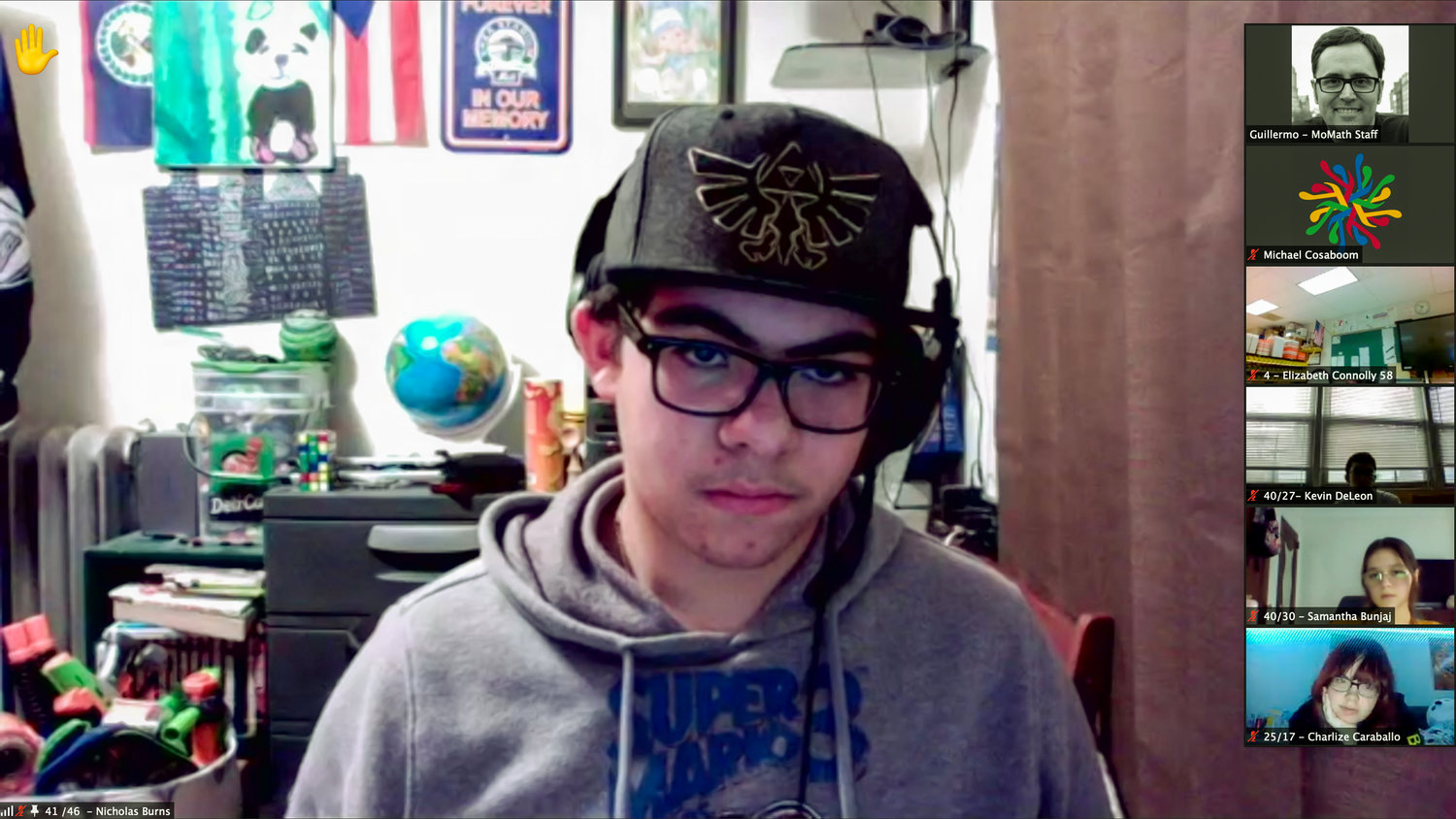 Nicholas Burns, an eighth-grader at P.S. 19 Judith K. Weiss, competes in the Con Edison MoMathlon. Hosted by the National Museum of Mathematics, students from P.S. 19 have competed nearly every year, although this is the first time they’ve done so remotely due to the coronavirus pandemic.
HIRAM ALEJANDRO DURÁN
Previous Next
By ROSE BRENNAN

For some middle schoolers, there is nothing more daunting than a math test. But nearly a dozen of them from one Bronx school took one unlike any other last month. And they did so voluntarily.

The “test” in question was the 2021 Con Edison MoMathlon, a yearly event hosted by the National Museum of Mathematics. But it’s not the usual deal for a math test, where you have to show your work, memorize equations, and turn in the papers at the end of the period, hoping for the best. Instead, the questions are challenging in a different way: Asking students to use logic to solve complicated, multi-layered problems.

And if that weren’t enough, the coronavirus through a wrench into an already unorthodox competition. That moved the MoMathlon from the Con Edison building near Gramercy Park — or more locally at the Ethical Culture Fieldston School — to each of the competitors’ homes.

One team from Woodlawn’s P.S. 19 Judith K. Weiss, ended up being the sole representation from the Bronx after Riverdale Country School dropped out at the last minute. But that didn’t worry James Frey, a veteran P.S. 19 teacher who coaches the math team each year. In fact, it provided an opportunity for the public school to show what it was made of.

“We’re lucky to be in a school like P.S. 19,” Frey said. “We usually do pretty good against the other public schools, but these private schools … have like five kids in a class. It’s hard to compete (with) the Fieldston School and Horace Mann. When you have five kids in a class, they get personal attention every day.”

Unfortunately, in the time leading up to the MoMathlon, P.S. 19 had to shift to fully remote learning due to multiple positive coronavirus cases at the school. As a result, Frey’s practices were not in-person as he would normally prefer in the days leading up to the actual competition.

But that didn’t stop team members from singing his praises. Morea Gjocaj said Frey excelled as a coach, even if he had to teach and give his input and advice over a computer.

“If you’re looking for a great eighth-grade teacher in math, come to P.S. 19,” Gjocaj said. “He’s taught me more than I could ever imagine myself learning in a year. One week, we learned something new almost every day. I wouldn’t have imagined being able to learn this much and understanding it this well.”

Such affection aside, complex problems weren’t the only issues students like Gjocaj can face. More often than not, “mathletes” and students who like to do math are ridiculed or bullied in television shows and movies set at high schools. But not at P.S. 19. There, being good at math actually makes you one of the cool kids.

“Everybody comes to you for problems they have in their classes, especially math classes,” said Nicholas Burns, one of those cool kids. “If you’re (on) a math team, then you are more likely to help other people who need help in their math class.”

Usually, the MoMathlon invites local competition from the five boroughs, as well as the entire tri-state area. But even though the remote format proved challenging for the competition, it was a blessing in disguise for students who wanted to compete but would not have otherwise been able to make the trip into the city.

“I think we will, of course, go back to having in-person events once we can,” said Cindy Lawrence, the math museum’s executive director. “But after we ran (an) adult math tournament, a lot of people asked us, ‘Will you please run it online next year again?’ So we had participants from all over the country that never would have been able to come to New York.”

The competition is typically split into individual and team rounds. But Lawrence likes to mix it up, sometimes asking teams to break apart and form new alliances with students from other schools. And while it might be challenging for students to work with people they’ve never met before, Lawrence hopes it provides a sense of community and teamwork among teens with similar interests.

“I really wanted to incorporate more of a social aspect and let kids meet kids from other schools who liked math,” she said. “We really wanted this to be an opportunity for these students to not just have fun with their peers … but also have the opportunity to meet other people and make new friends, maybe outside of your own school.”

Unfortunately, the team portion of the competition proved difficult to facilitate remotely. Virtual “breakout” rooms didn’t go as planned for MoMath. But Lawrence said the show had to go on, with the focus more on individual competition.

P.S. 19 ultimately fell short of earning any individual medals, but that didn’t affect the “mathletes” enjoying the chance to compete.

“It was a bit of a mess,” Frey said. “But I think the kids had a fun day despite all the technical issues.”

But to Lawrence, while prizes and medals might be nice to get, they’re not the be-all, end-all of what the MoMathlon is about. Rather, it’s about celebrating the subject these students love, and encouraging them to pursue it further.

And what better way to do that than to visit Midtown’s National Museum of Mathematics itself?

“I don’t think the prizes (are) necessarily the incentive,” Lawrence said. “What all of the students will get is … free passes to visit the museum. So we hope that, when we reopen, everybody will be encouraged to come and enjoy the museum in-person.”