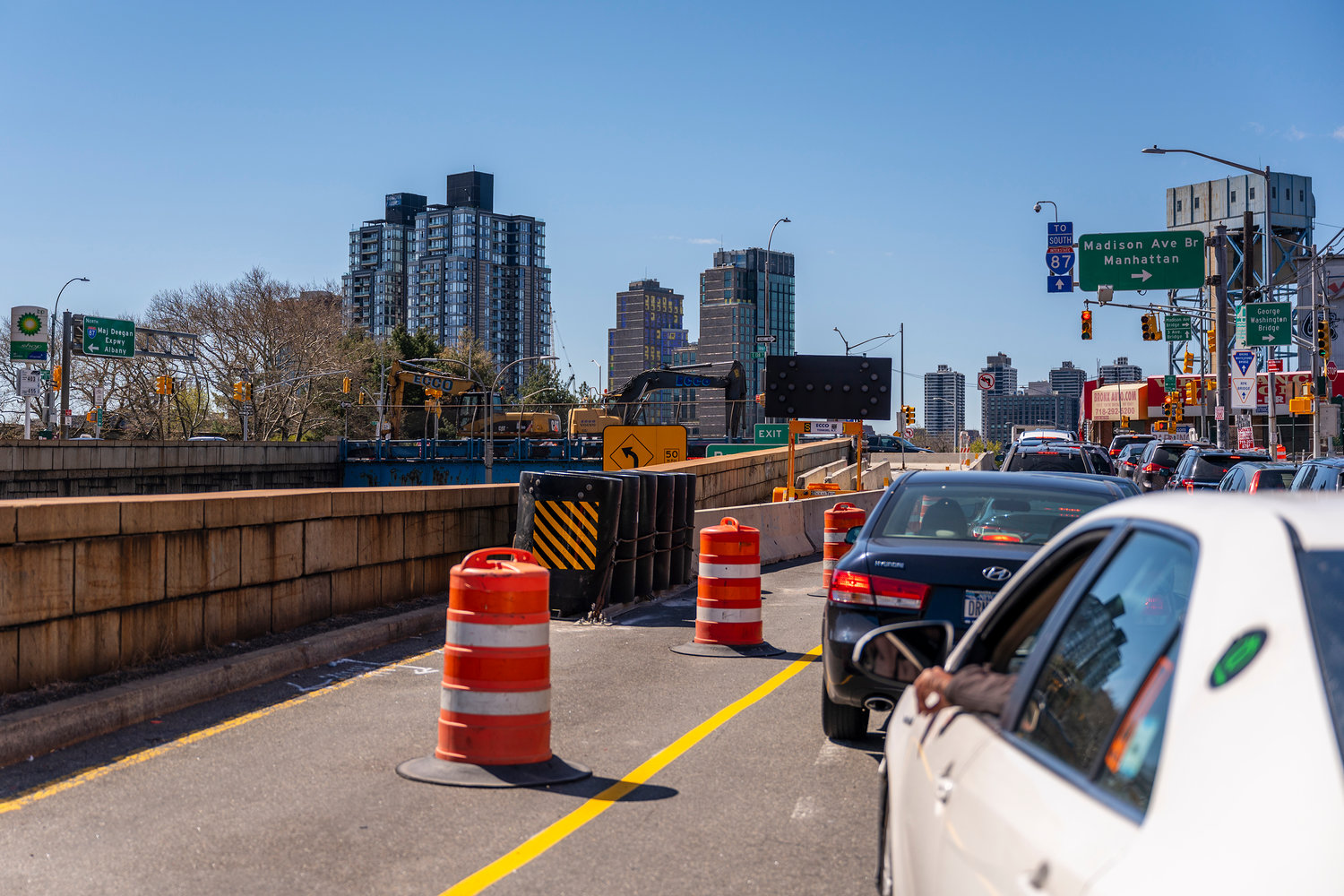 Construction is underway above the southbound Major Deegan Expressway exit at the intersection of East 138th and Madison Avenue Bridge on Wednesday, April 20. The small bridge there is undergoing a $47 million makeover.
Hiram Alejandro Durán
By STACY DRIKS

For commuters who drive through the Bronx daily, you may have noticed it’s taking longer to get around on the area’s major artery — the Major Deegan Expressway.

That’s because a small 80-year-old bridge in the South Bronx is undergoing a $47 million replacement and road repair. The New York State Department of Transportation recently announced the project to replace over the expressway near East 138th Street.

Due to the bridge’s tight area, there will be long-term right lane closures near the vicinity of Exit 3. The DOT stresses that motorists be aware of caution signs.

There will be an expected backup for motorists to merge and exit the expressway. Speeding is also cautioned — as always — during construction zones. The DOT also warned that police will cite drivers who speed in the work zone, where fines can range from $90 to $600, not including points.

Experienced engineer David Peraza told ABC 7 News in 2019 the damage to the bridge looked like “Swiss cheese” due to substantial rusted holes on steel girders — the main support columns of the bridge’s deck.

NYSDOT is introducing LED lighting on and under the bridge. The enhancement will improve daytime and nighttime visibility for drivers on either side of the bridge.

The new bridge will have a lifespan of 75 years and will require less maintenance, according to the NYSDOT.

A $119 million project that began in 2019 to reconstruct the expressway from East 161th Street to the Alexander Hamilton Bridge has been more extensive.

The three-year project includes the rehabilitation of The Depot Place bridge, which was built in 1954 and expands on the expressway.

The goal was to relieve traffic and result in less congestion to improve the quality of life for travelers of the main vital artery of the city.

Viaducts — long bridge-like structures that can carry a road or a railroad — were replaced with new roadways built on earth fill. The elimination of the 2,400-foot-long steel viaduct ran near the Yankee Stadium and south of the Depot Place Bridge.

In the past, viaducts were originally built over a subway line which has been abandoned for many years. However, the station and tunnel still remain today near Sedgwick Avenue. The landfill needs less maintenance time compared to the actual structure.

The six-lane Major Deegan Expressway follows the Bronx shore of the Harlem River for more than 8 miles, from the Triborough Bridge to the New York Thruway.

It connects the Bronx to upstate New York, and it passes by Bronx landmarks including Yankee Stadium and the High Bridge.

The expressway passes by many bridges that link Bronx and Manhattan including the University Heights, Washington, Macombs Dam, Madison Avenue, Willis Avenue, and Third Avenue Bridges.