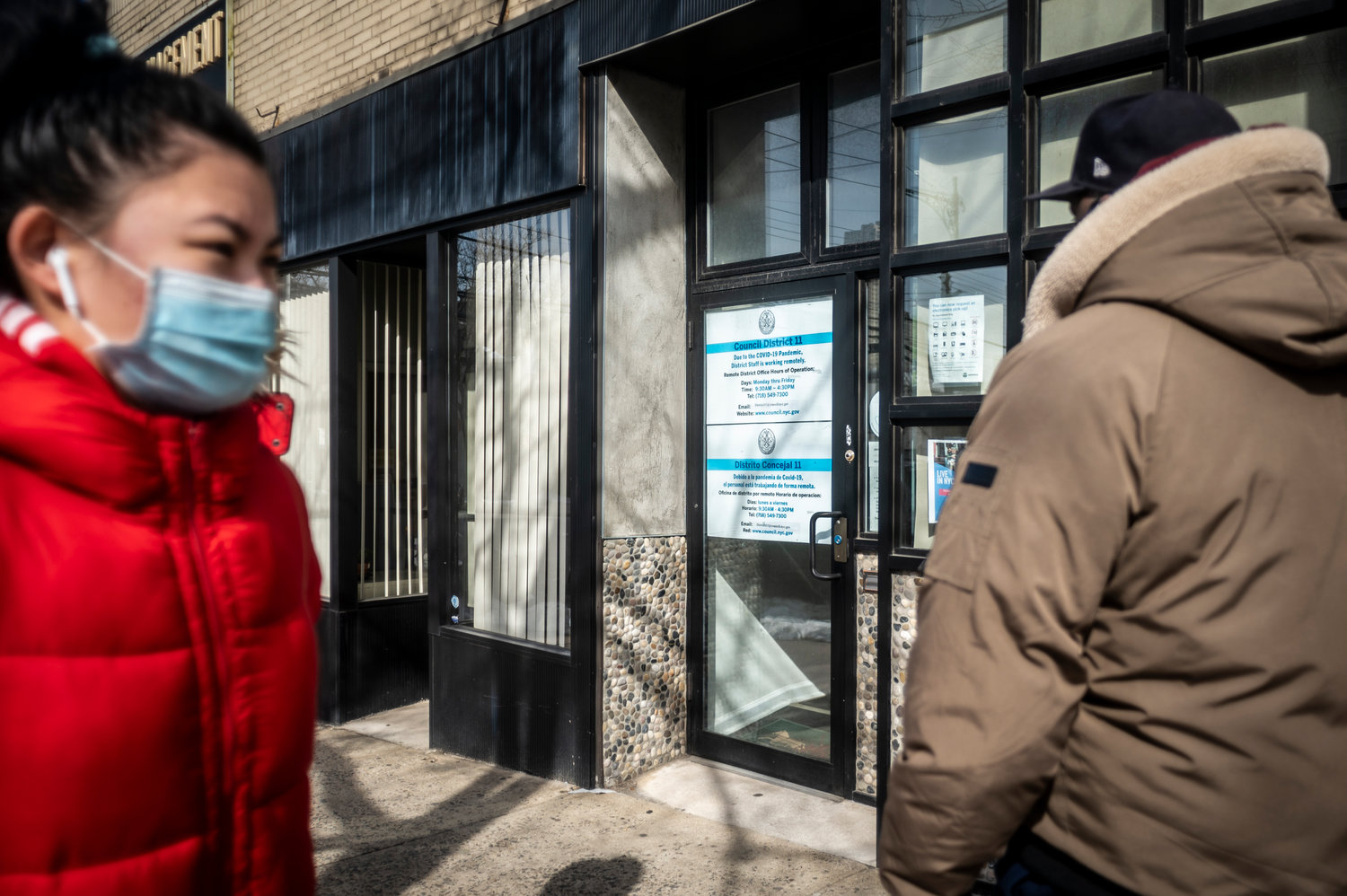 Doug Muzzio, a political science professor at Baruch College, thinks the winner of the March 23 city council special election will have an advantage in the June primary. Being the incumbent could make it much easier to raise money from scratch in the primary, a challenge all of the special election candidates will face.
HIRAM ALEJANDRO DURÁN 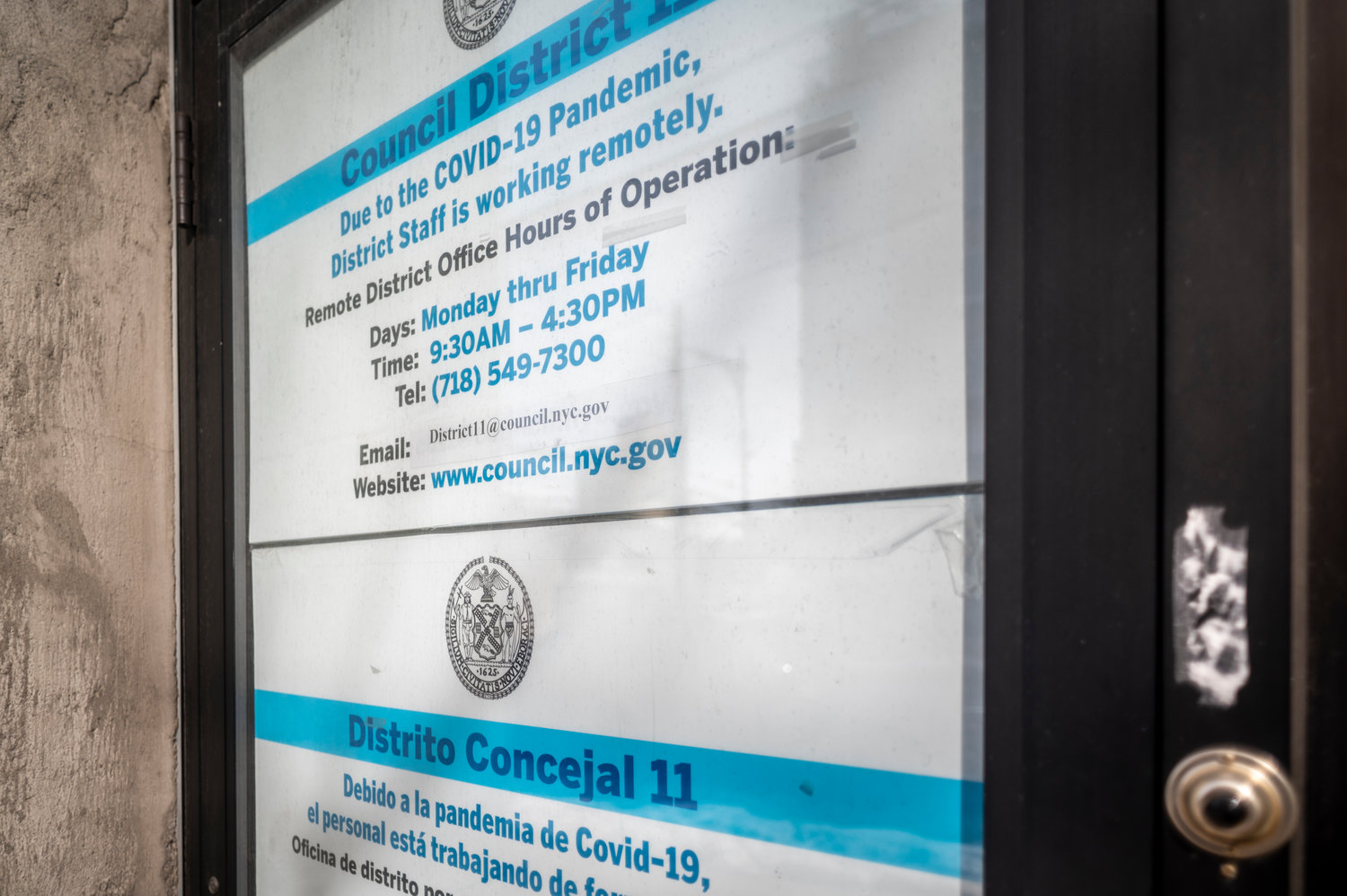 Whoever wins the March 23 city council special election will be visibly working for the district, says Jessica Haller, giving them an edge in the primary — even if that work is only a few months’ worth. Candidates running in the special and the June primary back-to-back will need every advantage they can get to win either or both elections.
HIRAM ALEJANDRO DURÃN 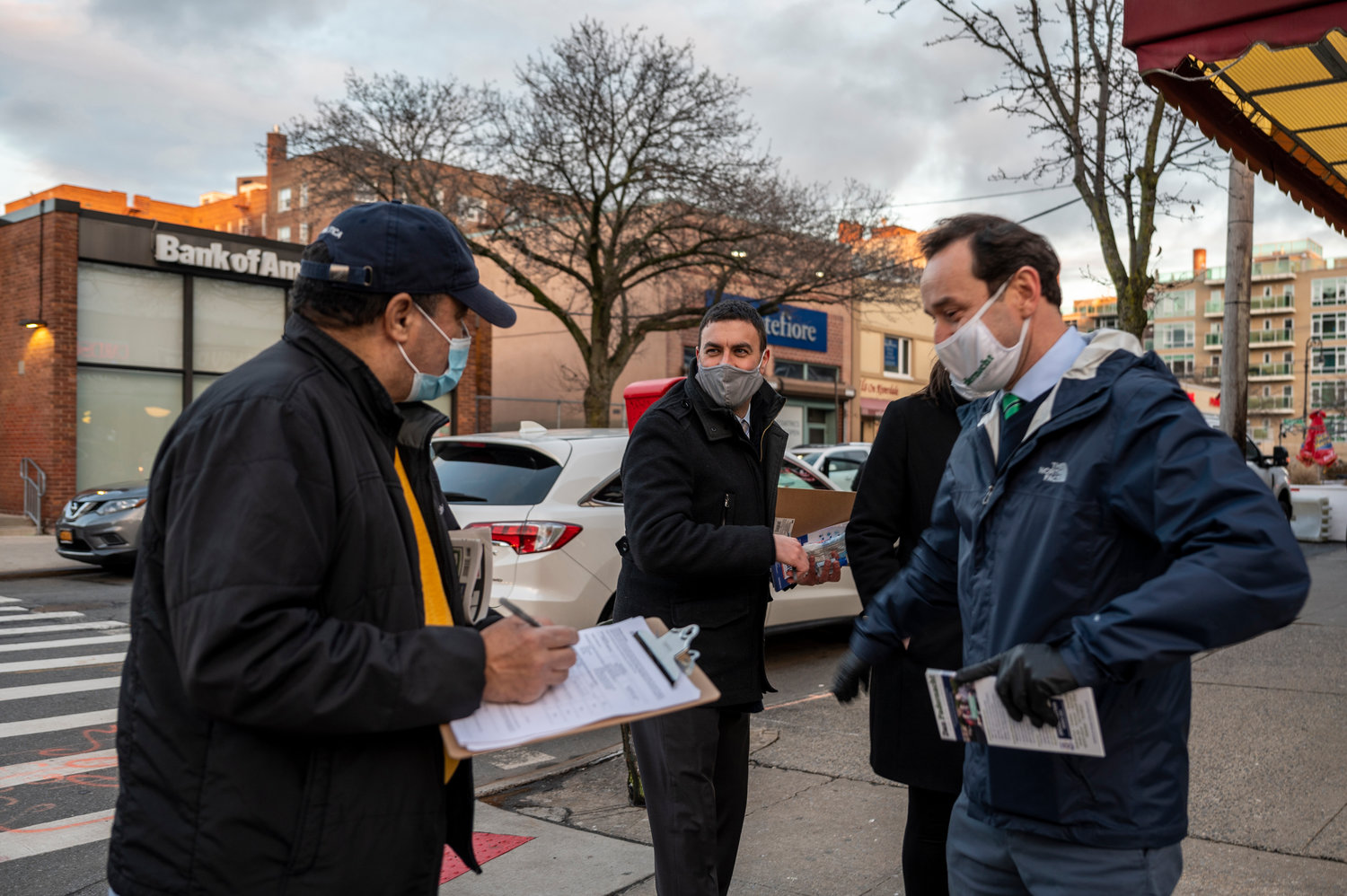 Eric Dinowitz and Dan Padernacht both believe they have the broad enough support to reset their bank accounts following the March 23 city council special election so they can raise enough to earn matching funds a short time later for the June primary.
HIRAM ALEJANDRO DURÃN/ File 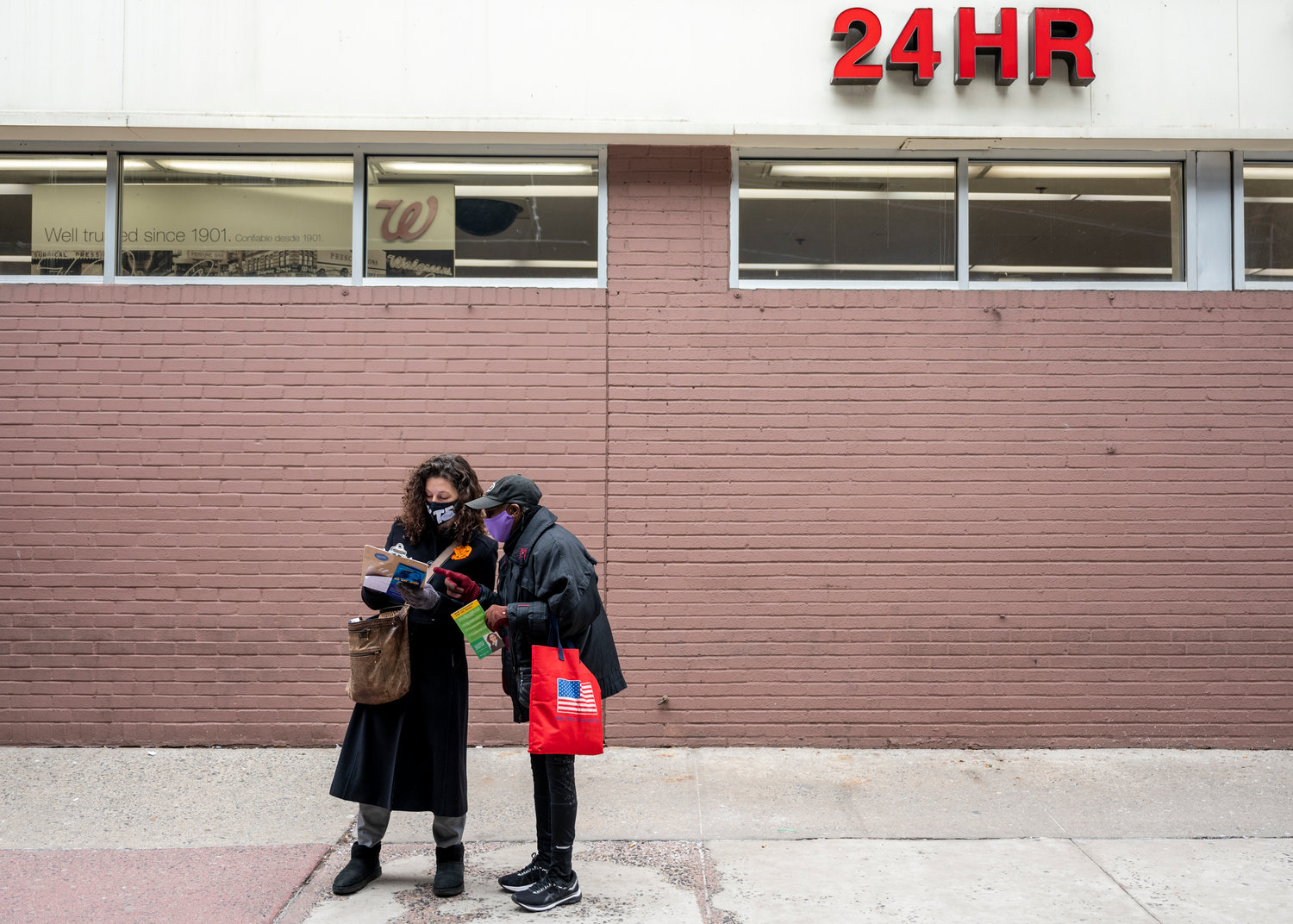 Jessica Haller says having to raise money from scratch for the June city council primary will be difficult because of the campaign finance board’s rules. Running the March special election and the June primary back-to-back presents many financial and logistical challenges for the candidates participating in both.
HIRAM ALEJANDRO DURÁN/ File
Previous Next
Little bit of precedence

The March 23 city council special election is unusually close this year to the June primary that would require voters to choose the ultimate replacement for Andrew Cohen more than once.

There is some precedence for this, however. Over the last decade, there were just two special elections taking place the same year as a primary for the same seat — Harlem’s District 9 in 2017 and southeast Queen’s District 31 in 2013. In both cases, the special election was held in February, but the primary was in September not June.

State law changed coming into this year, moving primaries from September up to June. That means what was once a seven-month buffer between such elections have now shrunk to just three months. It might create fundraising issues, but it also provides another logistical challenge: Candidates in the June primary may have to start petitioning for the ballot before anyone even votes on the special election before it.

Most would say running in just one election is tough. Even at the local level, candidates need to raise and spend tens of thousands of dollars to get their message out to voters.

In addition to money, time, manpower and a lot of conviction are required to win.

If it takes all of this to campaign in one election, then it’s not a stretch to say that running in another immediately after is an almost Herculean challenge.

But this is the challenge many of the candidates running to replace Andrew Cohen on the city council face.

Whoever wins the March 23 special election will only serve out the remainder of Cohen’s term — about nine months — and will have to win the Democratic primary in June in order to hold the seat for the next two years. The winner of the Democratic primary in this part of the Bronx is almost assured a general election win in November because, well, the borough is solidly blue ideologically.

The primary is set June 22, only about three months after the March special election. The proximity of the elections, however, could be a big hurdle for the candidates.

“Having a special and a primary so close compounds the difficulties for most candidates,” said Doug Muzzio, a political science professor at Baruch College. “They have to go back and raise more money. They raise it from the same people and outsiders. It’s perpetual campaigning. Having gone through it, you’re exhausted by the second race.”

Whoever comes out on top in the special election will likely have a significant edge in the primary. If the incumbent won the special overwhelmingly, money will flow to them in the primary because there’s an expectation they’ll win a second time, Muzzio said. If they win by a smaller margin, however, that makes their advantage a little less clear cut.

Many of the candidates fighting to replace Cohen agree that being the incumbent will put them in the strongest position to win the June primary. Jessica Haller says that advantage comes from visibility.

“You’re visibly doing the work for the community,” the Fieldston environmental entrepreneur said. “You’re doing the job. So it’s easier because you are more visibly accomplishing what needs to be accomplished.”

Dan Padernacht agrees, but with a caveat.

“I think the winner of the special has an advantage in that they’ll be the incumbent,” Padernacht said “However, it’s mitigated by the short length of time for the primary, and ranked-choice voting.”

Navigating a new way to vote

This special election, along with one across the borough to replace now-U.S. Rep. Ritchie Torres, will be just the third test case of the city’s new ranked-choice voting system.

Voters rank their choices one through five. If no candidate captures 50 percent of the ones, the ballots are recounted. The worst performing candidate in the first round is eliminated. Ballots with that candidate as the top choice are processed again, this time counting their second choices. That process repeats until two candidates remain.

That has created an interesting strategy among candidates early on in this new process — if they aren’t a voter’s first choice, they want to be the second.

That seems to be the strategy shared by Haller and arts non-profit executive Mino Lora. The special election’s only two women are teaming up and asking voters to make them their first and second choice — a strategy that could help ensure one of them wins.

If a candidate wins 50 percent of the vote in the first round — like James Gennaro did last month in Queens — the count is over, and none of the other ranked choices will matter. If one candidate doesn’t achieve that 50 percent — like what happened in the Queens seat once held by its new borough president, Donovan Richards — then analyzing the results gets more complicated.

“If you don’t reach the quota and you go to taking the second votes of the last place candidate, then it becomes a little harum scarum,” Muzzio said. “I can imagine being in the boiler room trying to analyze how the candidate’s doing, and you don’t have 50 percent of the vote.”

It also would mean waiting weeks to find out the winner. For Richards’ seat, the next round of counting is not expected to begin until March 10 — three weeks after the election concluded, as officials wait for absentee and military ballots.

When it comes to fundraising for the primary, candidates can’t use any of the leftover money they raised from the special election because of the city’s campaign finance board rules. That means they’ll start from scratch.

That will certainly challenge Haller because she says she’ll have to quickly change her fundraising apparatus due to new campaign finance board rules. Haller — along with several other candidates — have used a free digital fundraising tool from the board to collect those donations. The tool is designed to make it easier to comply with election laws for matching funds by collecting necessary personal information directly from contributors.

But that tool won’t be available to anyone running in the special election who wants to turn around and run in the primary, Haller said. Candidates are required to wait 30 days after the special election to start using the tool for a primary. This means candidates relying on the fundraising tool will have to switch over to something else, which won’t be integrated with the campaign finance board operations.

Close to the finish line

So far, Haller has been the special election’s top fundraiser, bringing in more than $79,000 in private donations. Not far behind is former teacher Eric Dinowitz with $72,000.

Dinowitz — son of Assemblyman Jeffrey Dinowitz and backed by the county’s political machine — isn’t too worried about having to raise money from many of the same donors.

“In this election, I’ve demonstrated my ability to raise from a broad coalition of supporters throughout the district,” Dinowitz said. “And I will only build on that for the primary election.”

Abigail Martin and Marcos Sierra both decided last January not to run in the special election and instead just focus their attention on the primary. Sierra thinks this decision gives him a slight advantage over those who stayed in the special because he doesn’t have to raise money from scratch all over again.

Martin, on the other hand, saw this more as a survival tactic for running a campaign during the coronavirus pandemic.

“It’s incredibly difficult to fundraise as it is,” Martin said. “To fundraise for two campaigns, it seemed very difficult to choose to do that, to ask people who are struggling in this pandemic to donate to us twice.”