Sports announcer wins round one vs. cancer 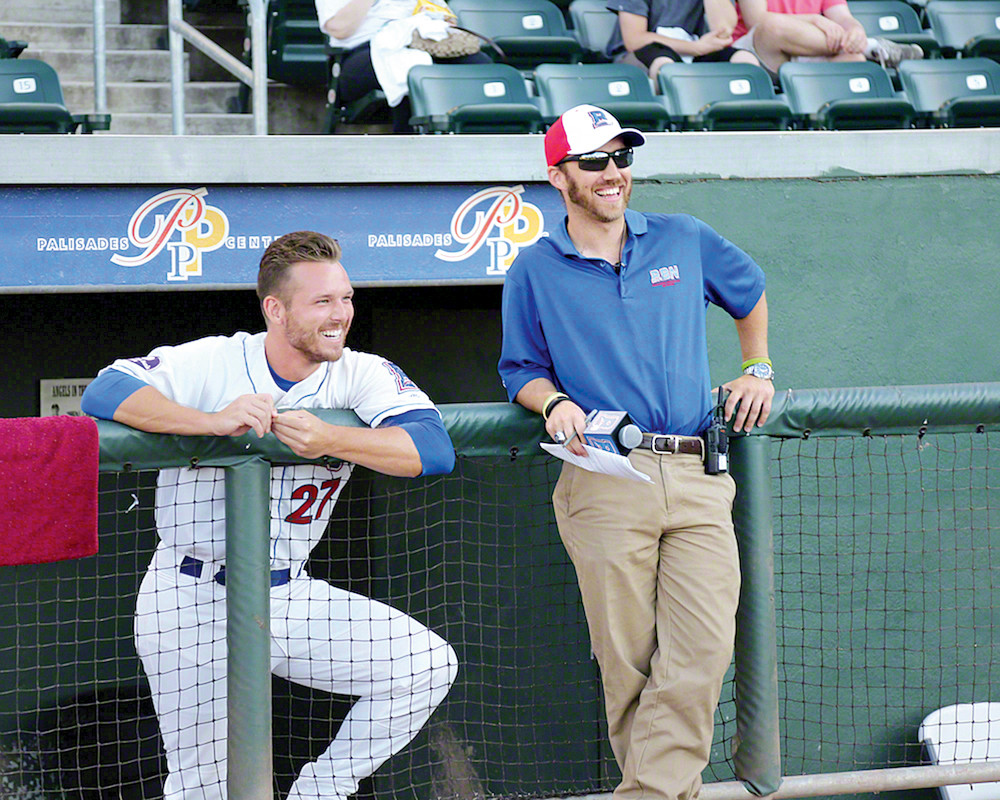 Manhattan College basketball announcer and cancer survivor, Christian Heimall, seen at a recent Rockland Boulders baseball game in Pomona, NY, for whom he is also an announcer.
Photo courtesy of Christian Heimall
By Sean Brennan

Christian Heimall was sitting on a flight to San Francisco back in November, jetting west with the rest of the Manhattan College men’s basketball team for their season-opening game at St. Mary’s College, and thinking about the events of the past year and the many dark and down moments that defined it.

“It’s so funny I’m on the flight with the team and I was thinking about things when [Manhattan players] Shane Richards and Rich Williams both said, ‘Man, we’re glad to have you back,’” said Heimall, the Jaspers 26-year-old play-by-play announcer. “It was so strange because it was just seven months ago that I was watching them win the MAAC Championship from a hospital bed. I couldn’t believe it was only seven months ago. That’s when I realized how slow time goes when you’re in a situation like that. It was awful.”

The awful situation Heimall was referring to was his battle with cancer this past year. More precisely Heimall was tackling a form of lymphoma called Diffuse Large B-Cell lymphoma. It was the beginning of a hellacious months-long ordeal of chemotherapy sessions and hospital visits.

Side effects of the treatment cost Heimall most of last season at Manhattan, including the Jaspers’ thrilling MAAC Tournament championship run and their NCAA Tournament appearance.

“December 18 was the first anniversary of my surgery and December 23 is when the biopsy came back and they told me I had cancer,” Heimall said. “I then started my chemo on January 16 and I walked out of the hospital on April 7 after my last session.”

The fact that Heimall was told he had cancer and would need treatment was a blow to the gut, but when he was told that his therapy would cost him much of his season — “The thing I love to do the most,” Heimall said — that was one he was not expecting.

“It definitely wasn’t easy,” Heimall said. “I went to the hospital on January 16 and Manhattan was playing at St. Peter’s that night and I’m thinking, ‘Okay, I have a 10 a.m. appointment and I’ll find out what the treatment is and when we’ll get started. So I thought I’d get back to the Bronx, change into a suit and head out to Jersey City to do the game. But when I got there they said, ‘All right we have a bed ready for you’ and I’m like, ‘Wait a minute. What do you mean? I thought we were starting after the weekend so I could call two more basketball games.’ They said no because I had used up all of my delay time so I started that day. That was the first kind of ‘Oh, crap’ moment. That’s when I was like, ‘Okay, this is real now.’”

But life has been decidedly kinder to Heimall since his final treatment last spring. He was able to handle his announcing duties with the minor league Rockland Boulders last summer and was back behind the microphone for the Jaspers’ season opener in California.This year he has not missed a single game — a far cry from last year’s forgotten season.

“Technically I haven’t gotten the all clear from the doctors,” Heimall said. “When you’ve finished your treatment there are two different diagnoses you can get. The one that I got was called ‘complete remission,’ which means there are no signs of cancer in my body and the chemo worked. ‘Cancer-free’ comes after a few more checkups to make sure your body is doing well and there is no recurrence because, like any treatment you go through for anything, it could pop back up at any point. Generally it takes about a year before you can be declared cancer free.”

Heimall said his father, Michael, a colonel in the Army and the Director of Walter Reed Medical Center, would speak frankly about his treatments and kept him informed when he needed straight answers. That helped get him through some of the tougher moments over the past year. But Heimall also credits his “other” family, the Manhattan College community, with raising his spirits during his treatments and welcoming him back into the fold this season.

“It was unspoken between me and the entire team and the staff on that first trip,” Heimall said. “But the guys, [Sports Information Director] Kevin Ross and Brian Mahoney [the color analyst who works with Heimall], could see it in my face, that it was so great to finally be back on the air after missing the MAAC Championship and missing the NCAAs,” Heimall said. “But sitting down at press row at St. Mary’s, when I put the headset on, I felt like I just got back into the flow of things. I sent out a tweet that for the first time in months I get to do what I want to do. What I loved to do. Then Kevin Ross put out a tweet on Manhattan’s twitter account saying ‘Great to have Chris back on the air.’ That meant a lot because they could have easily said when I was diagnosed, ‘Hey, listen, we’re going to go in another direction. You take your time getting healthy and all that stuff.’ And it was never that. It was always, just get back. It’s great to have that kind of family there and to be part of the Jaspers community.”

With his life-changing ordeal behind him now, Heimall intends to focus as much of his free time as possible on helping others who were — or still are — in similar circumstances to his own.

“For me now it’s about helping to raise awareness, helping to raise funds and helping anyone who is going through something like this,” Heimall said. “Because of my military upbringing I’ve always been one of those guys who understands how quickly life can change. Fortunately I haven’t lost a family member in a war but I’ve lost a lot of friends. What it’s done more than anything has made me more conscious of your human responsibility to society, to be a better person for society. My dad said something to me that kind of hit home. I was blogging during my illness and before I wrote my first blog I sent it to my dad to look it over and he said, ‘What you need to understand is that you have a voice now and it’s your responsibility as someone who is going through this to be a voice for those you can’t or won’t do it. That’s why I’ve tried to do so much in terms of spreading awareness and hosting fundraisers.”

And while the Jaspers are off to a bumpy start on their road to a three-peat, Christian Heimall’s world is far better than it was at this time last year. Instead of spending time in the hospital, he’ll spend the holiday with his family in Washington, D.C.

“Life is good,” Heimall said. “There really are no complaints. I’m as healthy as I have been and each day I get a little healthier. I have a great support system and I have a great family and I’m back doing exactly what I love, being back on the air.”