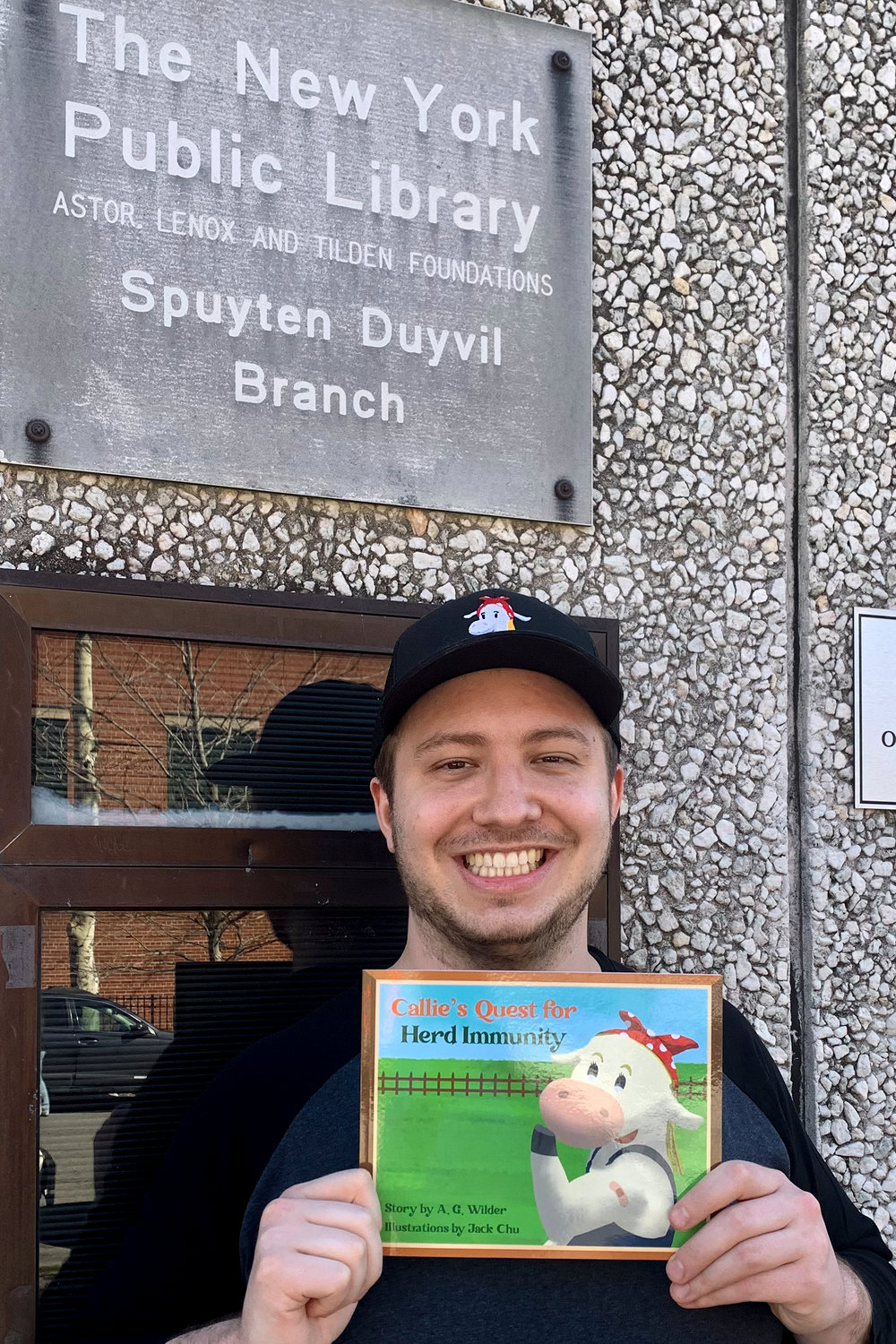 A lifelong Spuyten Duyvil resident has turned his masters thesis into a children’s book on herd immunity in light of the COVID-19 pandemic.

A.G. Wilder has self-published “Callie’s Quest for Herd Immunity,” which is based on his MA work at the International Institute of Social Studies of Erasmus in The Hague.

His thesis was on vaccine hesitancy and measles in Brazil and the United States.

“I also researched cost-effective affordable bottom-up solutions with the implementation and trusting relationships of community health workers,” Wilder shared in an email to The Riverdale Press.

“Originally, I chose the topic before COVID because of the measles vaccination problems in New York (City) and upstate.”

He said he financed the book with the COVID stimulus money he received from the federal government. He worked with Jack Chu, who illustrated the book and graduated with Wilder from Sarah Lawrence University.

They have donated some of the proceeds from the sale of the book to Stop AAPI Hate, a group that advocates against Asian-American hate crimes.

A description of the book, which is available in e-pub and hard copy on BookBaby.com, is as follows: “Callie the calf is just your average, run-of-the-mill dairy cow, who spends her days playing in the pastures and having fun with her friends and family.

Then, one day, Callie learns of a mysterious illness spreading through her herd. Everyone seems to have a lot of opinions on how to stop the virus, but how is Callie to know the truth? And even if she can, what can just one calf really do to keep her herd safe?”

The book is available pre-sale at major distributors, but on BookBaby.com there is a 40 percent discount on the hard copy and the e-pub is free with the code: COVID19.

A group of nine city council men and women have proposed a resolution calling for Mayor Eric Adams and all private employers in New York City to rehire workers fired due to non-compliance with COVID-19 mandates.

The resolution states that since the city discontinued its “Key to NYC” vaccination mandate on March 7 and Adams signed an executive order on March 24 exempting city-based professional athletes and performers from the private-sector mandate, it was time to rehire the 1,430 city employees who were fired.

“For nearly two years our city workers put their lives on the line each and every day to assist their fellow New Yorkers, regardless of COVID status, while thousands died of the virus,” Ariola said.

“And how have we repaid them for their service during this critical time? By demanding that they receive a vaccine that many had deep objections to. To add further insult to their injury, the city has recently agreed to allow athletes to play within the five boroughs regardless of their vaccination status. What a slap in the face. Do we really prioritize a multimillionaire athlete over a teacher, a firefighter, or a police officer?

How can anyone justify this kind of double standard?

It is imperative that we give this city’s workers the respect they deserve, and return those who lost their jobs due to vaccine noncompliance back to work immediately.”

Council m embers who have signed on in support of Resolution 106 are requesting that the Committee on Health hold a hearing on the legislation, where members can meet with health experts to discuss the rationale behind allowing athletes to play unvaccinated while denying thousands of New Yorkers the ability to go to work and earn a living.

A federal court struck down broader mask mandates on forms of public transportation like airlines this past week, claiming the Centers for Disease Control and Prevention was overstepping its authority.

The Biden administration says it will wait to hear CDC recommendations before deciding to appeal.