State government has a corruption problem, can Sen. Biaggi fix it? 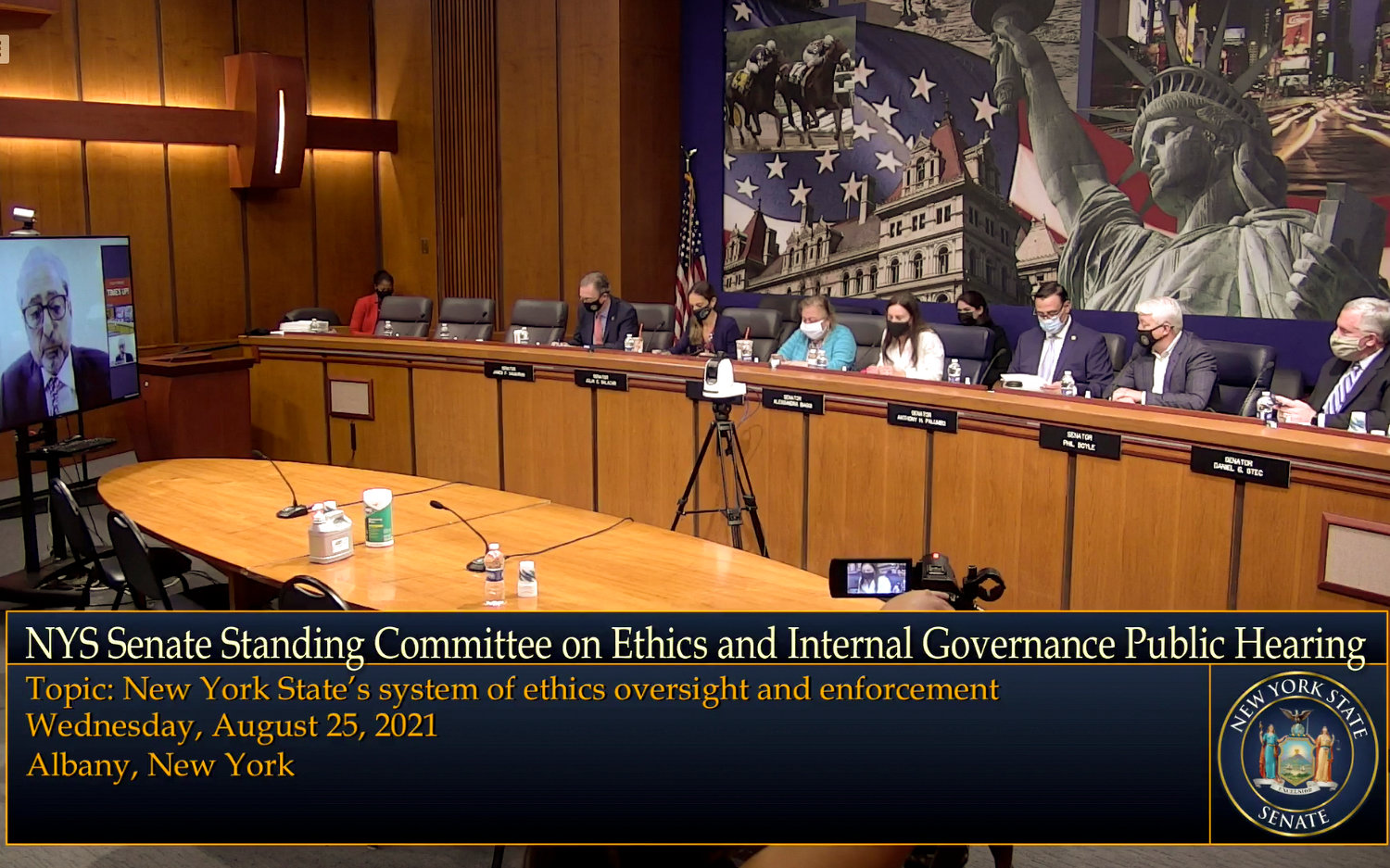 State Sen. Alessandra Biaggi held a hearing late last month to gather testimony about the alleged issues with the Joint Commission on Public Ethics, the state’s ethics watchdog. Biaggi sponsored a bill seeking to reform JCOPE by changing how it vote and how its commissioners are appointed.
Courtesy of The New York State Senate 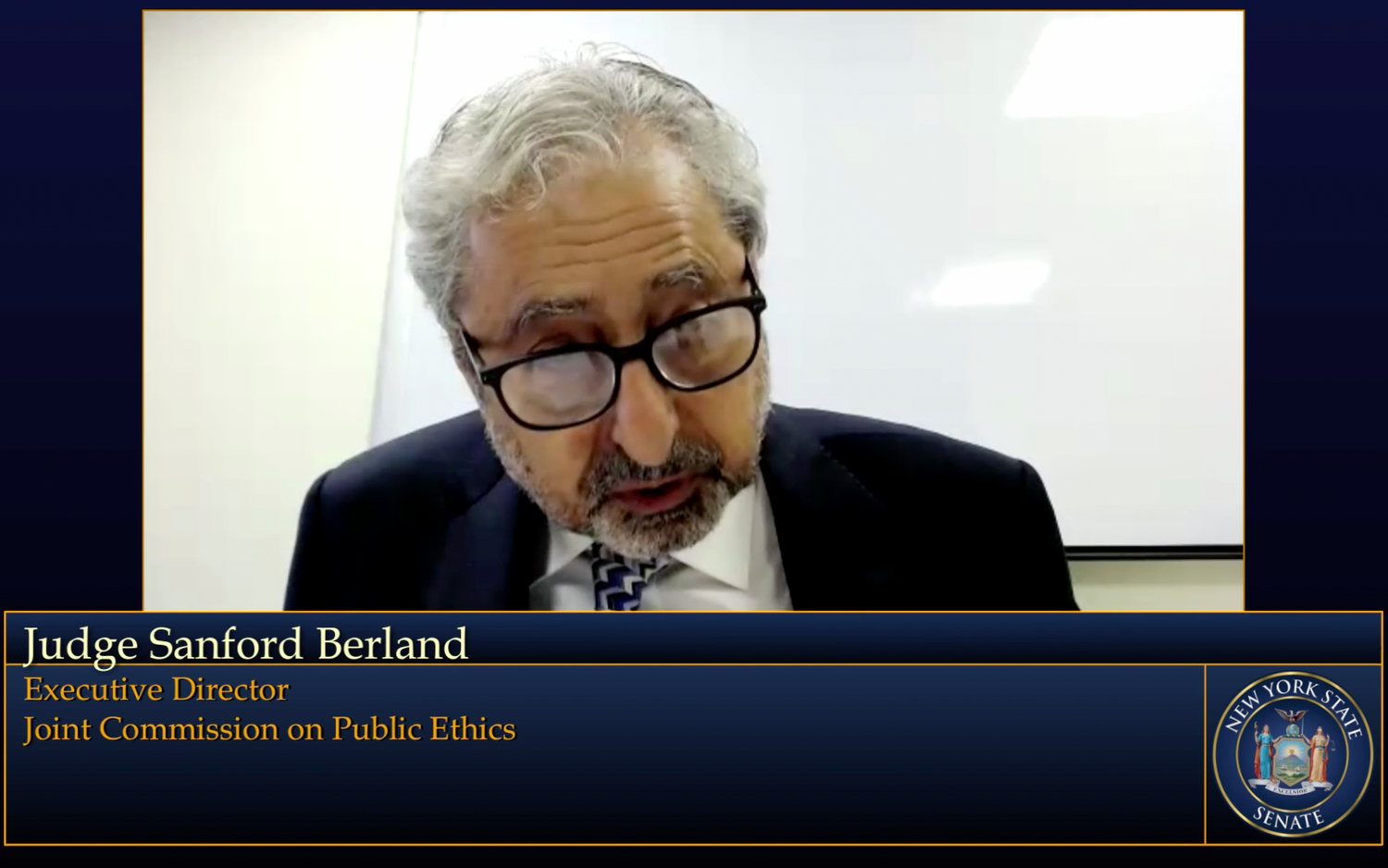 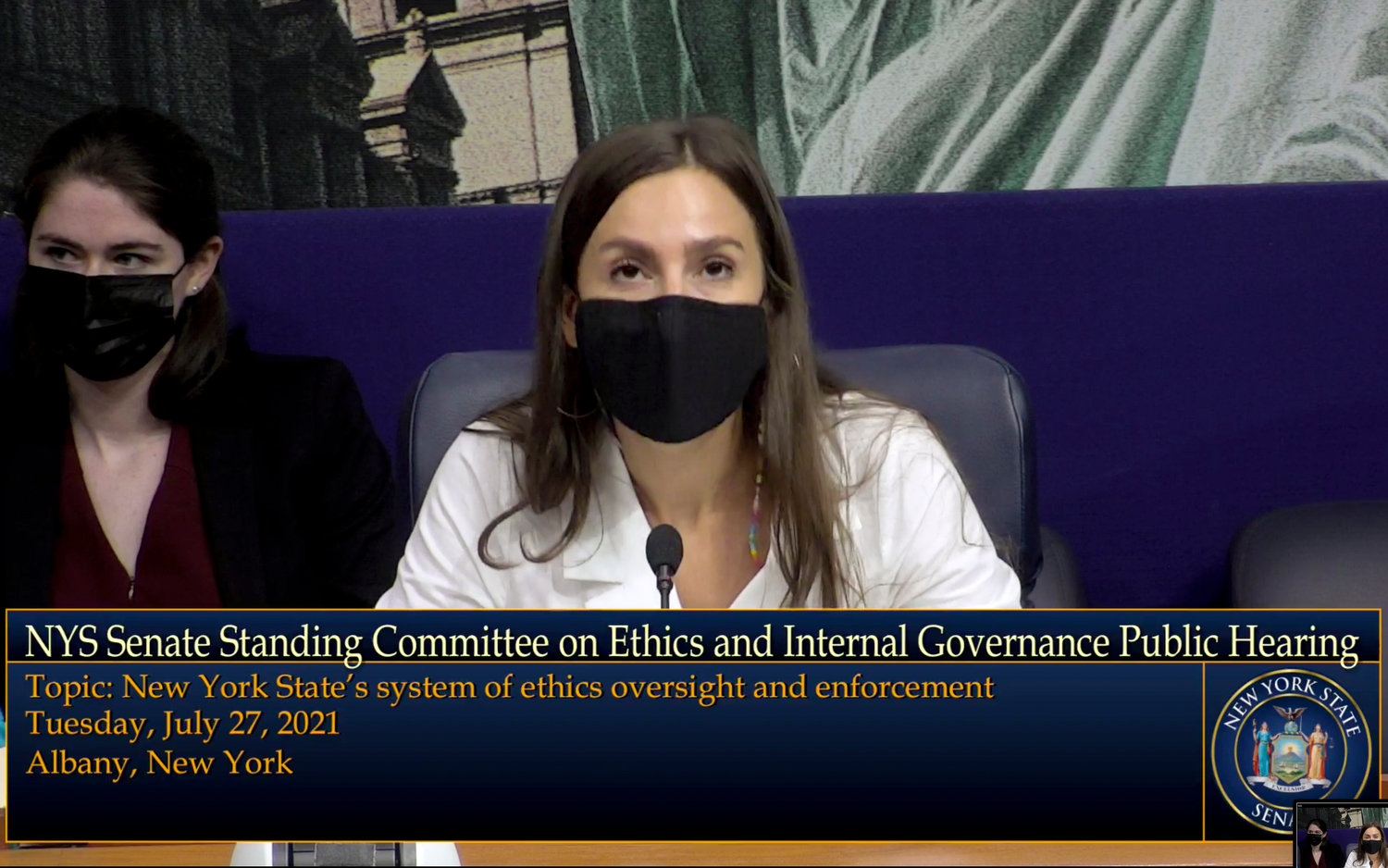 State Sen. Alessandra Biaggi looked into alleged issues with the Joint Commission on Public Ethics, the state’s ethics watchdog, late last month. Biaggi has sponsored a bill she says would fix many of JCOPE’s structural issues that prevent it from being truly independent.
Courtesy of The New York State Senate
Previous Next

It’s been a month since Andrew Cuomo stepped down as governor over sexual harassment allegations detailed in a report from state attorney general Letitia James.

But that wasn’t the only scandal Cuomo has faced over the last year. The former governor also was hit by allegations he fostered a toxic work environment, and covered up the true number of people who died from COVID-19 complications in nursing homes across the state last year.

Frequent Cuomo critics like state Sen. Alessandra Biaggi argue these problems are hardly new. As a former executive chamber staffer herself, Biaggi said Cuomo presided over an administration rife with corruption for much of his time in office. And it could be a systemic issue inside the office itself since Cuomo’s two predecessors — Eliot Spitzer and David Paterson — were mired in scandals of their own.

The main issue, Biaggi said, is an ineffectual enforcement of ethics rules within the executive branch and, to some extent, even among her colleagues in the state legislature.

“Everything you build upon a floor that has no integrity has really no strength in being upheld,” Biaggi said. “In the state of New York, why we continue to repeat corruption is because there’s a failure in our legislature, in our executive branch, to hold people accountable for breaking rules and laws. We have people who leave the chamber in handcuffs, and we just see the same patterns repeated.”

But who’s to blame? Biaggi and other critics have a single target: the Joint Commission on Public Ethics, the watchdog responsible for enforcing ethics and lobbying rules in Albany.

It was founded in 2011 through legislation sponsored by Cuomo and pushed by then-Assembly Speaker Sheldon Silver and senate majority leader Dean Skelos — both of whom later faced legal trouble of their own. Silver was convicted of corruption in 2015 and was expelled by the Assembly. Skelos was convicted the same year for corruption and bribery, but was later released from prison into house arrest because of the coronavirus pandemic. Silver remains behind bars.

Since its inception, critics have accused JCOPE of ignoring major ethics violations by Cuomo and his allies.

“What we have seen with JCOPE is that they’ve mishandled cases related to sexual harassment against powerful legislators,” Biaggi said. “We’ve seen them mishandle certain internal investigations or drag their feet. They use this excuse that they don’t have enough resources. But the reality is that they don’t do their jobs.”

Biaggi also introduced legislation that aims to address many of what she sees as JCOPE’s structural defects.

“We have an opportunity — after one of the most corrupt governors in the history of our state has now left office — to really create something that is meaningful, that actually works,” Biaggi said. “And also, that takes ethics seriously.”

Blair Horner, executive director of the Public Interest Research Group, says JCOPE has been ineffective because of how its members are appointed, as well as how its internal rules are designed.

“The commission’s structure is appointees from the people that JCOPE oversees,” Horner said. “Then you have these byzantine rules that basically allow the commission to block an investigation, even if the majority of the commissioners want things to go ahead. So, it was designed to fail. And it has.”

Many of JCOPE’s 14 commissioners are directly appointed by the governor and legislative leaders from the majority parties in both chambers — all of whom are frequently the target of its investigations. Additionally, in certain cases, a small number of commissioners have the power to block votes by a majority of their colleagues.

Biaggi says her bill would allow legislative leaders from both the majority and minority parties to appoint two members each.

This would replace the current system, which gives those appointments to legislative leaders of parties that were in the majority when the agency was created in 2011.

Second, Biaggi said, it would remove the requirement that JCOPE can only investigate and find officials guilty of wrongdoing if two commissioners from their own political party vote for it. It would replace this system with a straight majority vote from any of the members. And lastly, the bill also establishes a straight majority vote for choosing the agency’s executive director.

While Biaggi believes her bill would fix many of JCOPE’s fundamental issues, it’s still really a short-term solution. The only way to bring true ethics reform, she says, is to start all over and replace JCOPE with a new ethics watchdog established through a state constitutional amendment.

The new agency would be modeled after the state’s judicial conduct commission — the oversight agency for those on the bench.

But such legislation won’t become law overnight. In fact, the soonest Kruger’s measure could take effect is 2024 because constitutional amendments require votes in two consecutive legislative terms before they can be signed into law. The current term ends next year.

“Sen. Biaggi’s bill is how do you provide lifeboats to the Titanic when you’re trying to rearrange the deckchairs as compared to making a new boat,” Horner said. “Which is what Kruger does. (It’s) really sort of the Band-Aid to making the existing fatally flawed system work better.

“While people sort of try to scratch their heads and figure out how to make an ethics enforcement agency, an ethics watchdog agency. That works.”