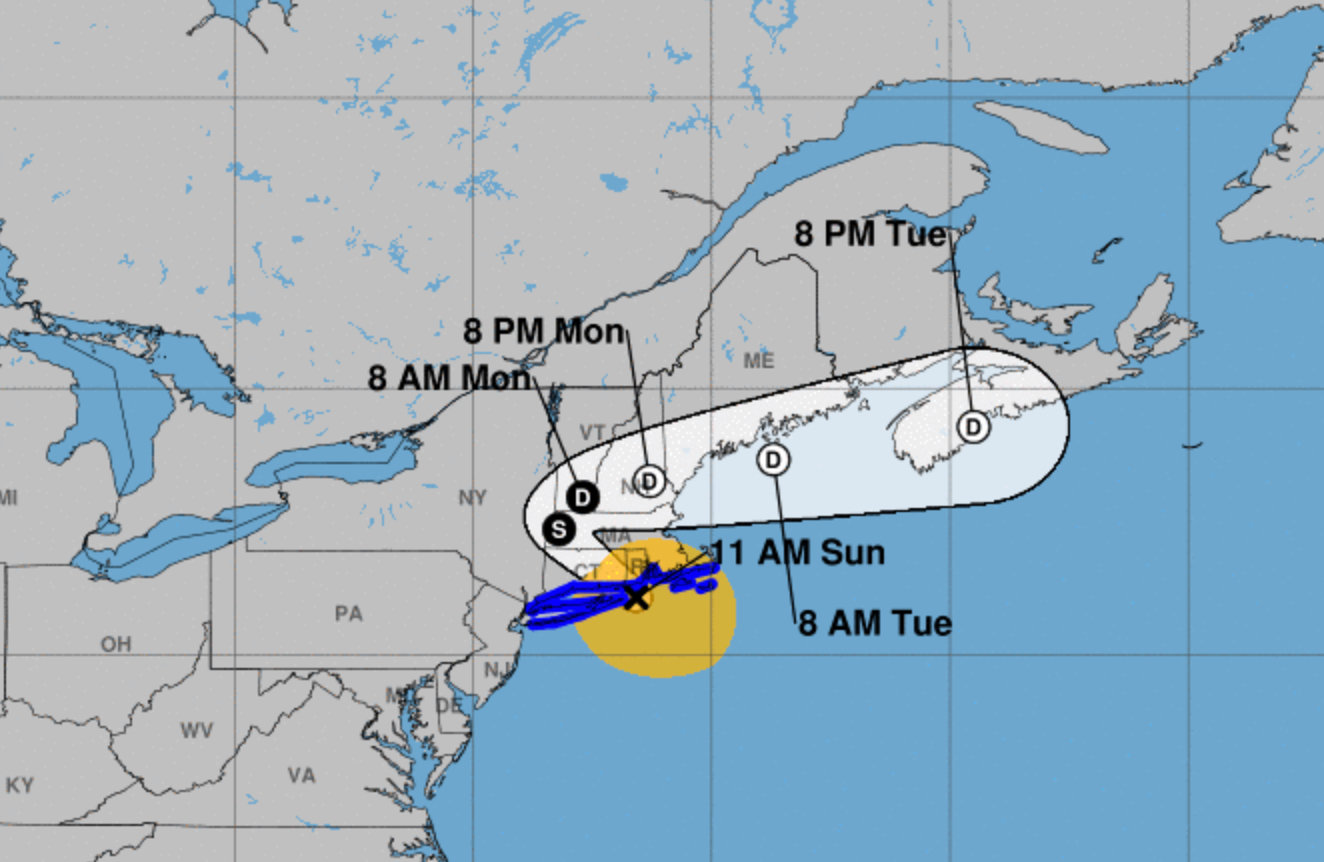 Path of Tropical Storm Henri as of 11 a.m., on Sunday.
Courtesy of National Weather Service
How to report fallen trees

Even with tropical storm-force winds, it's possible trees will be damaged or even uprooted.

If that happens, the city's parks department says the best place to report it is to 311. However, if there is a life-threatening emergency — or if the downed tree has damaged electrical utilities or created power outages — call 911.

When reporting tree damage, ensure to include the location and a description of the size of the tree or branch. Also include the following details:

• Is the fallen tree blocking a road? Fully or partially?

• Has it fallen on, or is it touching, utility wires?

• Has it fallen onto a house or other building? Is the building damaged?

• Has it fallen onto a car or other vehicle?

• Is the tree split, either vertically or horizontally, but is still standing? Is the tree uprooted or leaning noticeably?

• Is tree debris blocking a sidewalk? Fully or partially?

Response is based on what resources are available, with a priority to those that threaten life and safety first.

Tropical Storm Henri made landfall just after noon near Westerly, Rhode Island. At the same time, the National Weather Service has canceled the tropical storm warning for much of the rest of the Northeast, including the Bronx.

But forecasters are now looking at how a tropical depression version of the storm stalling over the New York-Connecticut border could wreak its own havoc, creating significantly more rain than expected.

And with it, flooding.

"The amount of rainfall is actually quite large in many of these areas," Gov. Andrew Cuomo said during a Sunday morning press briefing. "And that's what we're concerned about."

The ground already is saturated with water, the governor said, meaning it can't absorb too much more — especially if a lot of it falls in a short period of time. That means flooding in many areas — even miles away from Henri's center — could be a major issue.

The National Weather Service says Henri made landfall at 12:15 p.m., with sustained winds of 60 mph. It's traveling at 12 mph, and is still expected to make a turn northwest, hugging the boundary between Connecticut and New York into the late evening.

That could produce as much as six inches of rain over portions of Long Island, New England, southeast New York, New Jersey and northeast Pennsylvania, forecasters said — with some areas potentially seeing as much as a foot of rainfall.

Because of that, the weather service warns of flash, urban and small stream flooding, as well as some isolated moderate river flooding.

Winds for the greater Riverdale area are now expected between 10 to 15 mph, with gusts as high as 45 mph. While the storm spawning tornadoes now is less likely, flooding remains an issue with up to 4 inches of rain expected to fall today as the storm passes by.

The Bronx remains under a flood watch, continuing through Monday evening.

President Joe Biden declared a federal emergency in New York on Sunday morning, affecting a number of counties including the Bronx. That will allow federal assistance to flow in supplementing the states of emergency declared Saturday by both Gov. Andrew Cuomo and Mayor Bill de Blasio.

The order authorizes the Department of Homeland Security and the Federal Emergency Management Agency to coordinate all disaster relief efforts, according to the White House.

Some roads still have a chance of becoming impassable because of debris, and it's possible some bridges and causeways could be shut down in the wake of the storm.

The NWS also warns there could be scattered power and communications outages — more prevalent in areas with above-ground lines.

de Blasio suspended the open restaurants and open streets programs as well as construction in the city until early Monday morning. Restaurants closed up any street dining at midnight Saturday, and will continue until 6 a.m., on Monday.

Also shut down during that same time was all outdoor construction work — including sidewalk and street work. The mayor also asked all construction sites to secure their equipment and materials ahead of the storm.

The Metropolitan Transportation Authority shut down parts of the Metro-North and Long Island railroad systems early Sunday. That included the Wassaic branch of the Harlem Line, as well as the entire New Haven Line, including the New Canaan, Danbury and Waterbury branches.

MTA expects to operate service every two hours on the Hudson and Harlem lines, but there will be no buses on the Waterbury branch.

"The projected path of Hurricane Henri shows the most significant impacts will be to Metro-North customers in Connecticut, but current forecasts predict tropical storm-force winds across our territory," Metro-North president Catherine Rinaldi said, in a release, ahead of the storm. "Metro-North territory is particularly vulnerable to high winds due to trees and overhead power wires, and we are suspending service on the Wassaic branch of the Harlem Line and the entire New Haven Line in an effort to keep customers and employees safe."

Despite the storm, Cuomo says he still intends to make Monday his last full day in office, officially resigning late that evening so that Lt. Gov. Kathy Hochul can take over first thing on Tuesday. Still, he warned people to remain vigilant as Henri continues to move over the state.

"All today, all through tonight until the storm passes — and until we know what kind of damage has been done," Cuomo said, "we ask you to remain attentive and cautious."