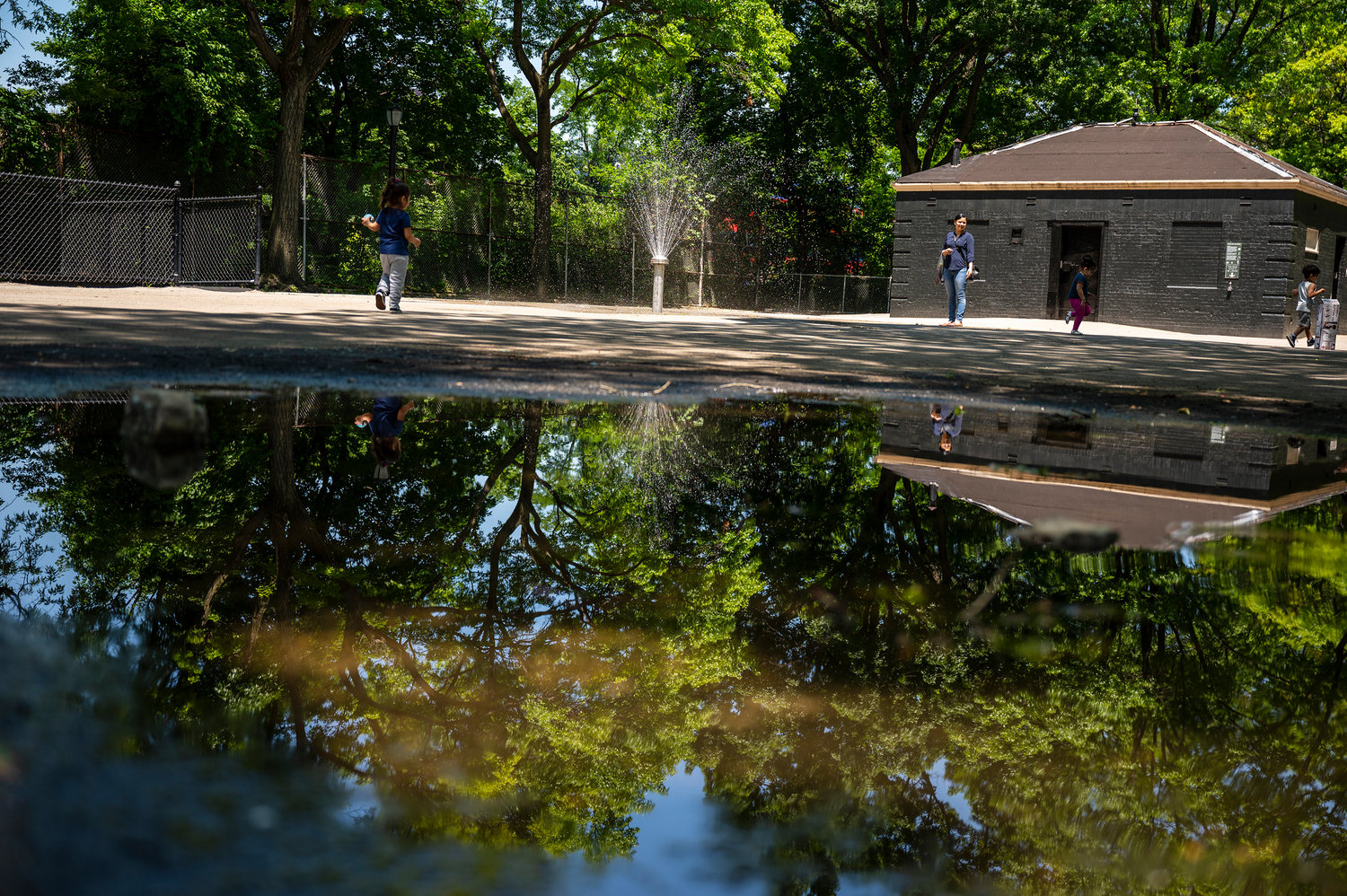 There is limited green space at Bailey Playground, which runs along the Major Deegan Expressway for a few blocks. Community Board 8 has requested the city make improvements to the playground for years to no avail.
Hiram Alejandro DurÃ¡n 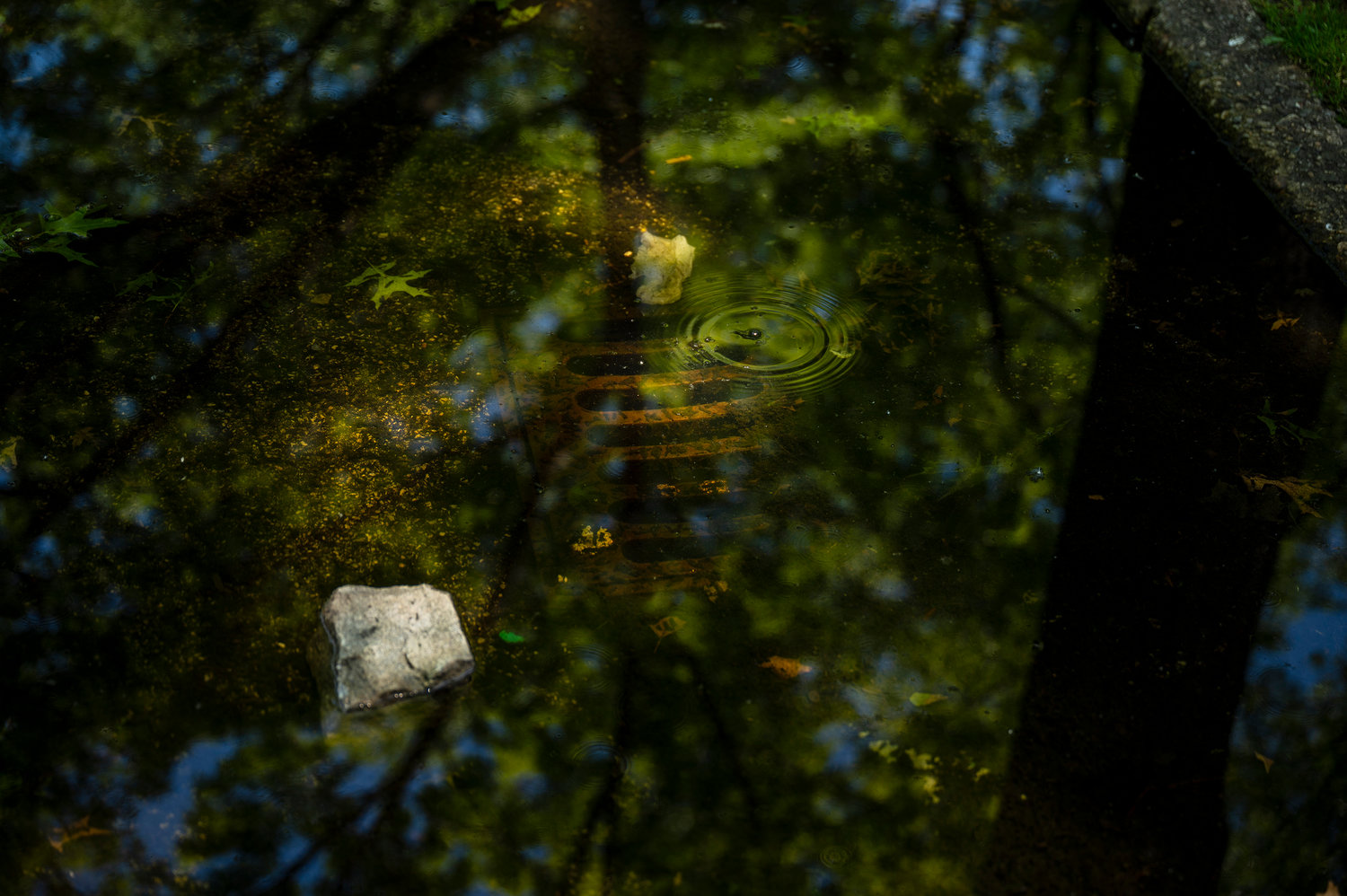 A puddle forms around a clogged drain at Bailey Playground on Monday afternoon. Community Board 8 members have been urging the city for years to renovate the park and rehabilitate the park’s dilapidated drainage system.
Hiram Alejandro DurÃ¡n
Previous Next
By Sachi McClendon

At the corner of West 234th Street and Bailey Avenue, running along the Major Deegan Expressway for about four blocks, sits Bailey Playground.

The park is covered by pavement, with little greenery save for a few trees. If it weren’t for the metal fence that follows the park’s perimeter, it might be mistaken for a parking lot. And beneath the concrete is a series of dilapidated clay pipes that often back up, leading to pools of standing water — a potential health hazard.

“It’s kind of just like a slab of concrete and tar. And there’s a playground. There happens to be no green space,” said Ramdat Singh, the chair of the Parks and Recreation committee for Community Board 8.

But the board wants that to change. As part of its budget request for the upcoming fiscal years, CB8 is expected to urge the city to renovate the playground by introducing more greenery, pulling out large slabs of pavement, updating equipment and repairing the deteriorated drainage system.

Yet those requests have fallen on deaf ears as the city has made little to no progress in that area. “That’s just so frustrating, that year after year that sits there, and everybody agrees that it’s something that needs to be done. And yet it never gets funding,” said Bob Bender, a CB8 member, at a recent meeting.

Bailey Playground is not alone. There are a handful of other projects that CB8 has requested that the city tackle for more than five years that have yet to see any progress, according to new data recently compiled by a board member. Of those requests, the data shows, the majority are related to improvements to the district’s parks.

Since 2016, the board has made at least five budget requests to renovate the Van Cortlandt Stadium, establish erosion control measures in Ewen Park, construct a restroom at Broadway and West 251st Street in Van Cortlandt Park, and rehabilitate the pond wall at Spuyten Duyvil Park.

So why are requests related to upgrades at parks often neglected?

The major hurdle boils down to funding. In almost all of the responses to requests made by CB8 to improve the parks, the city’s patks and recreation department has responded that while it supports these proposals, it doesn’t have the money.

In fact, the parks department historically received limited, to non-existent, funding for capital projects, at least in comparison to other agencies. According to a 2018 report put out by the think tank Center for an Urban Future, the department’s capital budget is really only made up of discretionary funds elected officials are able to allocate for a specific project.

Beyond a paltry capital budget, the department’s expense budget — which goes towards salaries and day-to-day operations — is also lacking.

Right now the parks department is slated to receive around $600 million in the next fiscal year, a slight decrease from last year. Even though Mayor Eric Adams, while on the campaign trail, pledged to allocate $1 billion to the agency, he has since not lived up to that promise.

“It’s a massive cut,” Singh said. “With a budget like that, it adds a lot more stress on the maintenance people to get around to each one of these parks.”

And if maintenance is perpetually deferred, normal wear-and-tear fixes can eventually turn into big-ticket capital budget expenditures. “If everyday maintenance is not taken care of, then it becomes a capital project,” Singh said.

Singh added that it makes sense that the board’s repeat requests are dominated by parks projects since the Bronx — and CB8 in particular — simply have a lot of parks. According to the organization New Yorkers for the parks department, there are 31 pieces of parkland in the area that take up almost a quarter of the district’s land.

The city has made progress on two projects that had stalled for years, including making headway on daylighting Tibbetts Brook and renovating Strong Street Playground. That said, the projects only received funding after being on the board’s capital budget requests for many years.

Yet, to further compound things, these projects aren’t cheap. The Bailey Playground renovations are estimated to cost upwards of $20 million. Even though the city’s parks department agrees that the playground needs to be renovated, it told the board to reach out to the local council member to drum up support.

“We are currently exploring potential capital renovations to Bailey Playground, and are committed to equitably restoring and renovating the parks in this district,” a parks department spokesperson said in a statement. “Council District 11 has received $162 million in completed and ongoing Parks renovation projects since 2015.”

Councilman Eric Dinowitz said he is working on bringing much-needed improvements to the playground.  “Bailey Avenue, including the playground, is an important area of revitalization in my district,” he said in a statement. “That is why I have requested improved lighting and tree stump removal, and provided funding to improve the businesses on Bailey Avenue and (West) 238th Street. Because of the extreme cost of renovations to the playground, I am working with other elected officials to secure the almost $20 million necessary to complete the project.”

Still, the board hopes to use this data on repeat capital budget requests to pressure local electeds to direct resources to these parks renovations. That’s why CB8 developed the data in the first place.

“We know that these are the most pressing issues that we’ve been asking for the last five to seven years,” said Margaret Della, who compiled the data for the board.

“We need to go to our council members — go to the borough president, go to the agencies — and just continue to beat that drum and say like, ‘these are our priorities.’”

“People want to have cookouts and they want their kids to play and have a safe, clean place to go,” she said. “And so we want to be sure that we’re taking care of all of our parks.”