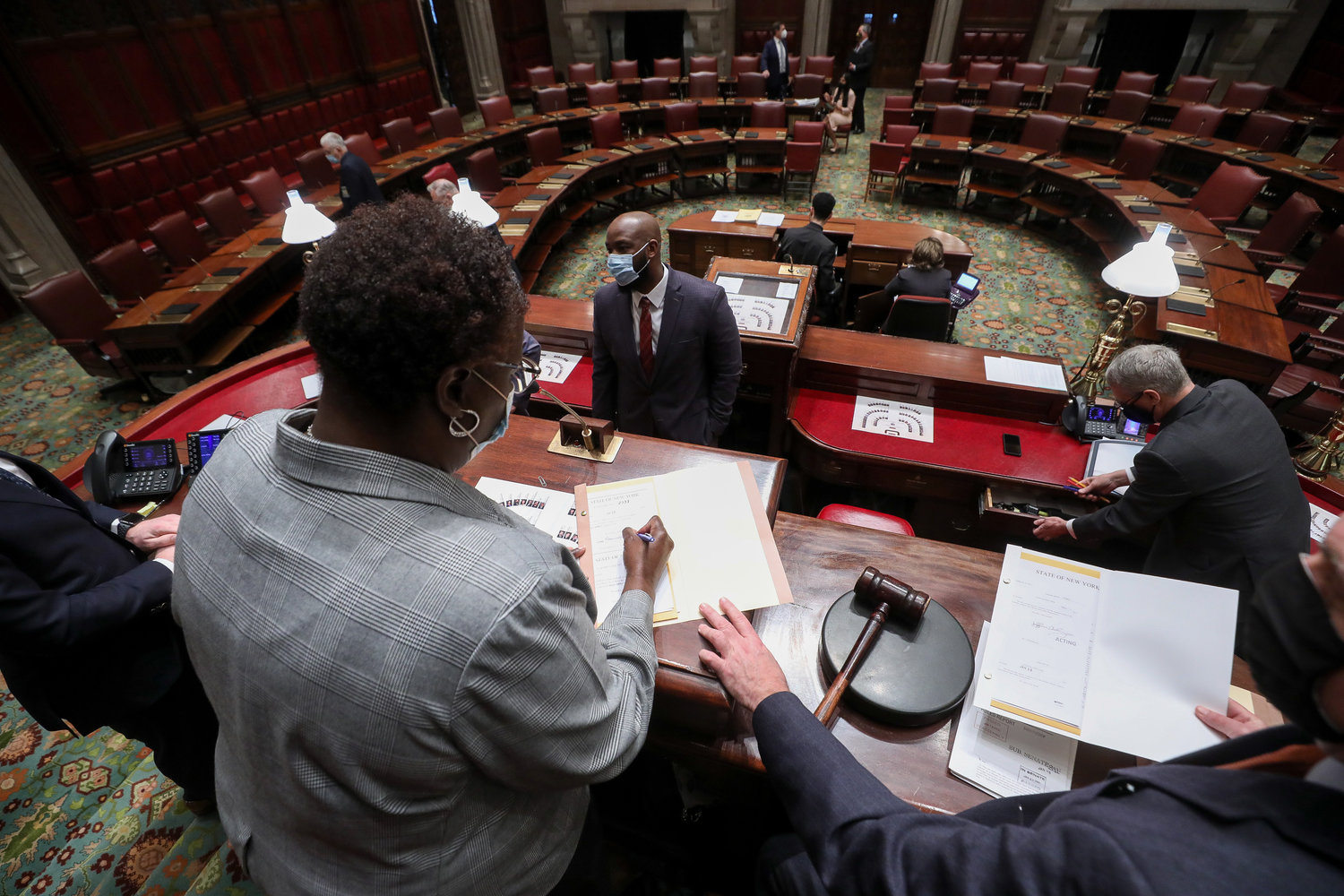 The New York Health Act, which aims to bring universal health insurance to New York state, was introduced by Assemblyman Richard Gottfried for the first time 30 years ago. State Sen. Gustavo Rivera, the bill’s senate sponsor, says it hasn’t passed so far because changing the way health care is delivered in the state is no easy task.
Courtesy of NYS Senate Media Services 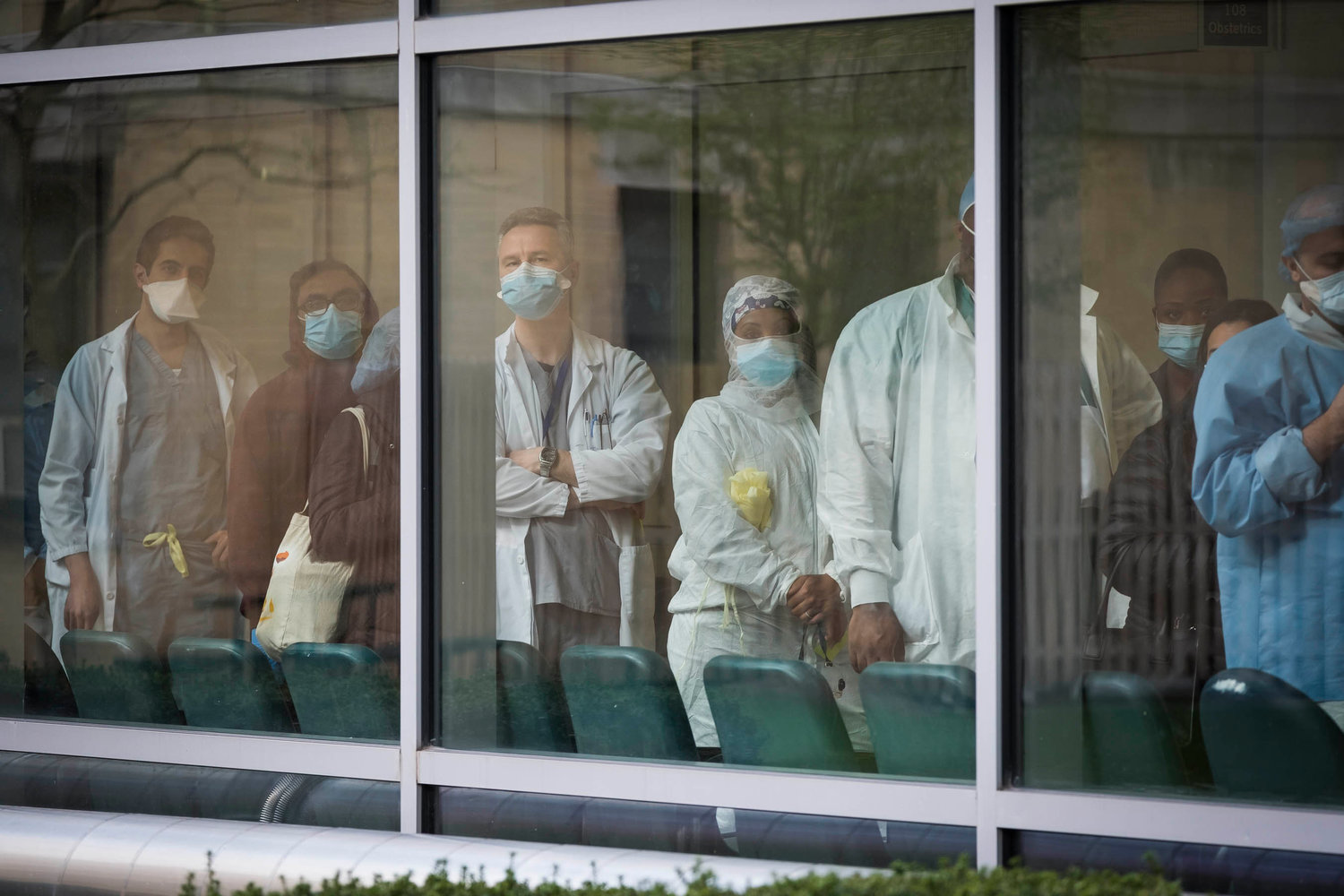 When the coronavirus pandemic first erupted in the city some two years ago, many worried if COVID-19 testing would be covered by their health insurance. State Sen. Gustavo Rivera says people will no longer have to worry about what their insurance covers if the legislature passes the New York Health Act — a bill that would implement single-payer health care statewide — this year.
Courtesy of Ed Reed/Mayoral Photography Office 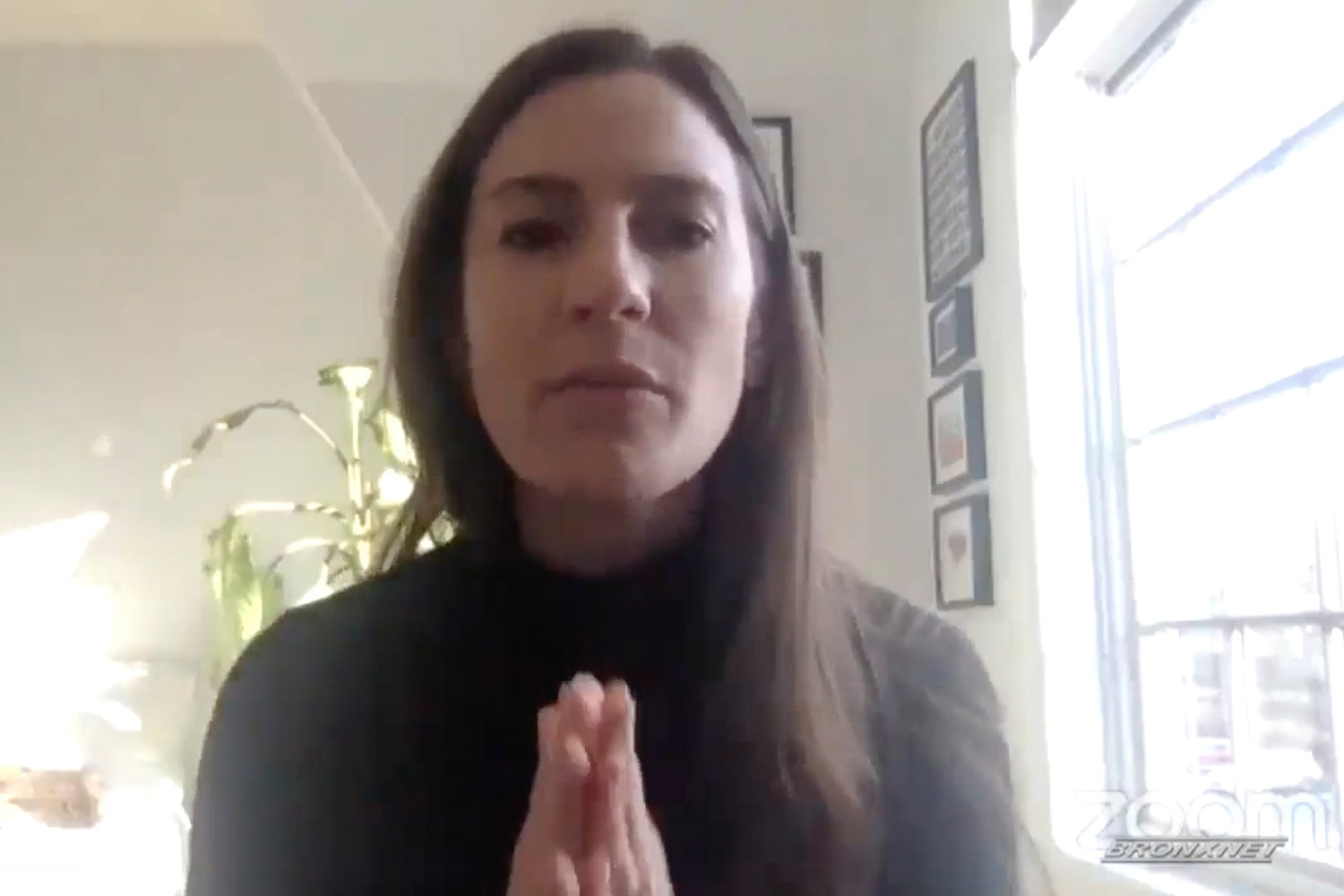 State Sen. Alessandra Biaggi says she’s cautiously optimistic about passing the New York Health Act — a bill to establish single-payer health insurance in New York — during this legislative session. But she says this will only be possible if legislators make the bill a primary focus and continuously organize around it.
Courtesy of Northwest Bronx Indivisible 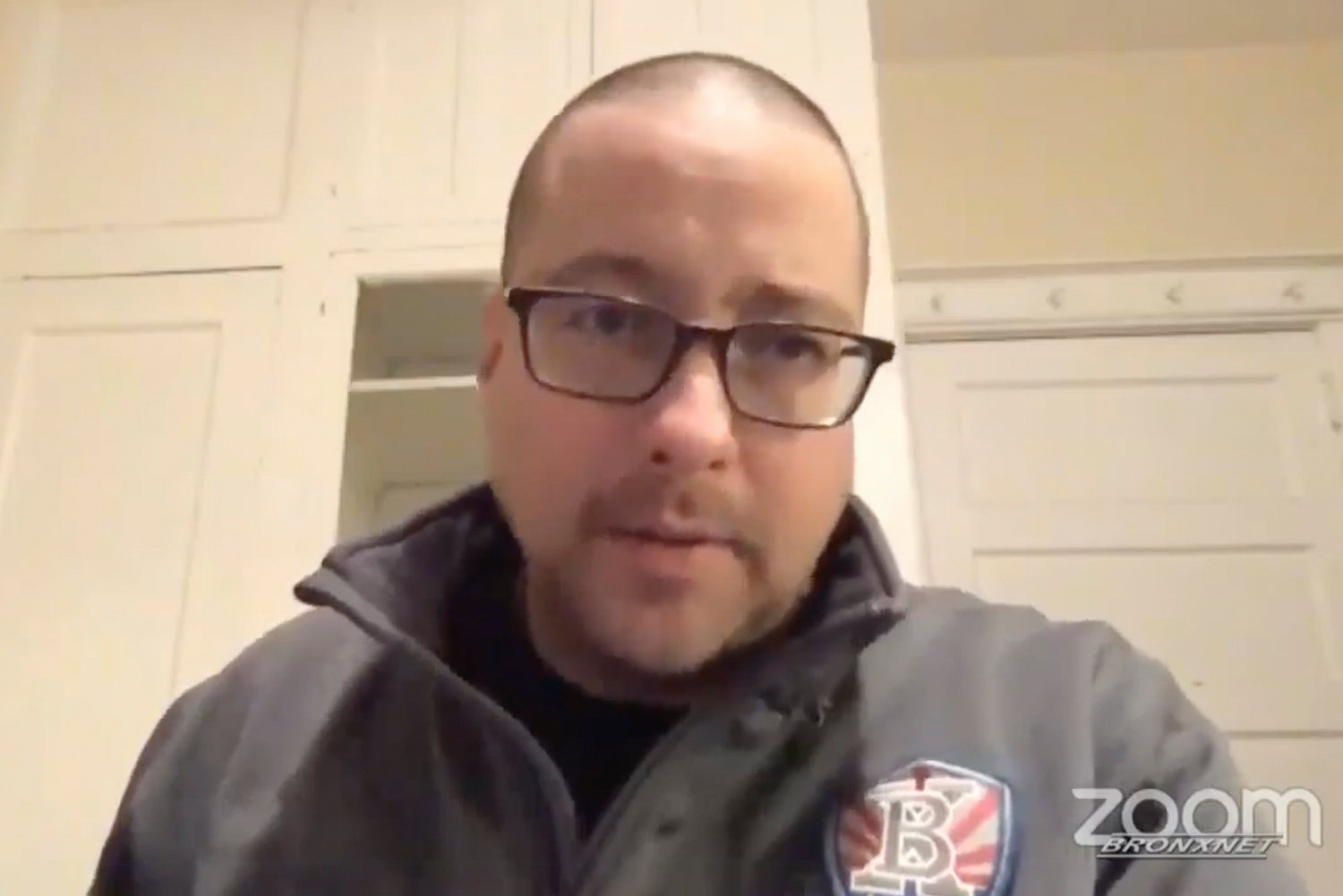 State Sen. Gustavo Rivera says it’s been hard to pass the New York Health Act — a bill that would implement universal health insurance in New York — because people only know what it’s like to have private insurance. Proponents of the bill say it will give all state residents comprehensive coverage free of premiums, co-pays and deductibles.
Courtesy of Northwest Bronx Indivisible 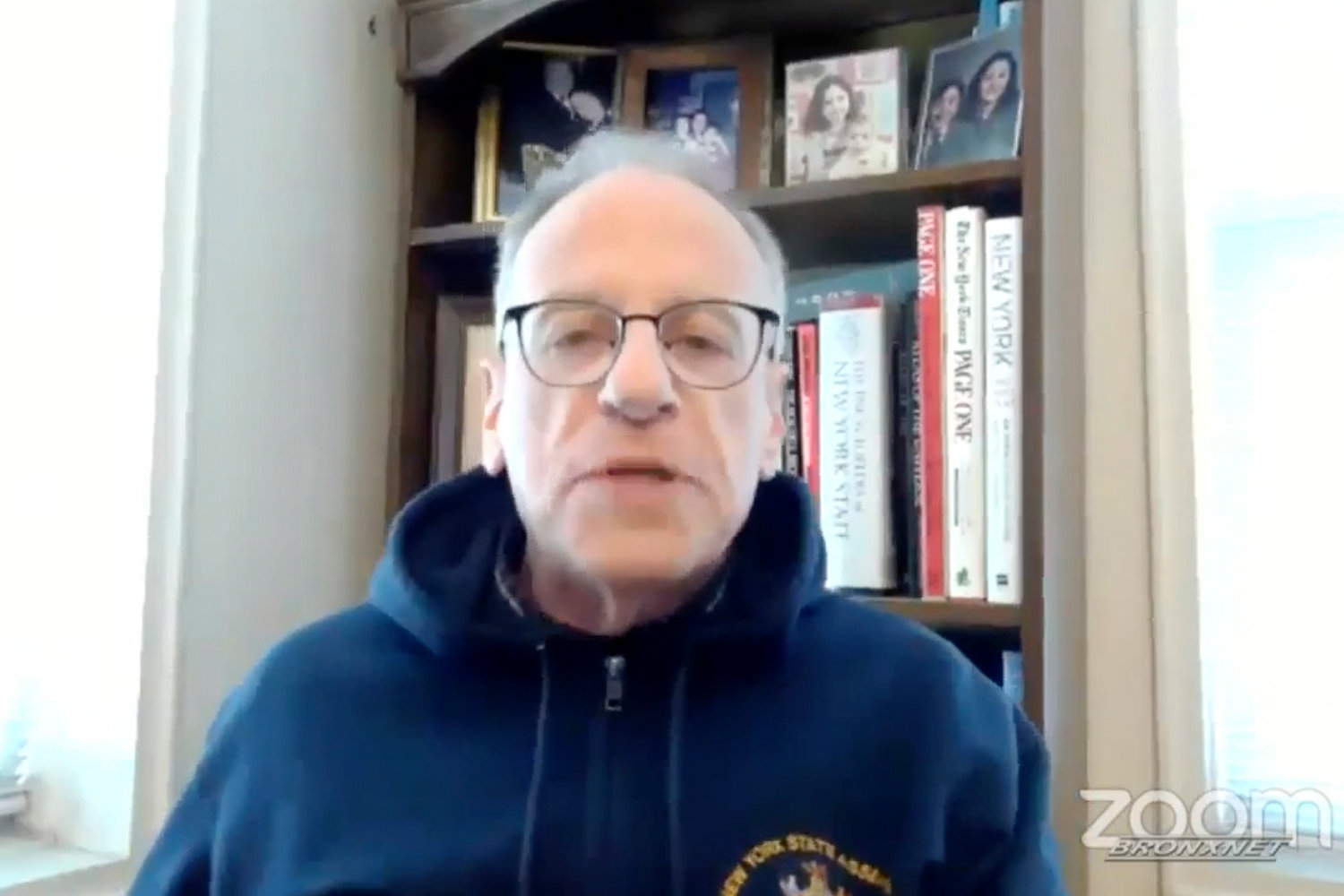 During a recent town hall hosted by Northwest Bronx Indivisible, Assemblyman Jeffrey Dinowitz said legislators need the support of labor unions to pass the New York Health Act — a bill that would implement single-payer health care in the state. Currently DC37 and other public employee unions oppose the bill because they’re worried about losing their current insurance plans.
Courtesy of Northwest Bronx Indivisible
Previous Next
By ETHAN STARK-MILLER

There was a lot of uncertainty when the coronavirus pandemic first erupted in the United States some two years ago. But one question, in particular, stood out to Gustavo Rivera in those early days.

“When we began the pandemic, the concern that everybody had was, ‘If we get tested, is that going to be covered by my insurance?’” the state senator told a recent town hall hosted by Northwest Bronx Indivisible. “That was the first instance that everybody kind of thought about, as opposed to saying, ‘Where is my nearest health facility?’ And just go and get tested.”

Yet there’s a simple way to make sure that question would never have to be asked again, Rivera said, whether it comes to COVID-19 testing or most other medical issues: Pass the New York Health Act. Rivera leads the way for this universal health care bill in the upper chamber, with the controversial stance of replacing employer-based private insurance in New York with a state-run option that covers everyone.

Proponents of New York Health say the bill would implement a system that has no network restrictions, premiums, deductibles or co-pays. Plus, coverage would include everything from primary care to vision, dental and hearing.

The state would fund the bill by significantly raising taxes on the wealthy.

The concept was first introduced to Albany three decades ago by Assemblyman Richard Gottfried — a 50-year veteran of the lower chamber who represents parts of Manhattan. Gottfried retires at the end of the year, making this his last chance to shepherd what has become a sort of legacy bill for him into law.

As the years have gone by, the conditions for passing New York Health have only improved. The Democrats have super-majorities in the state senate and Assembly, and the bill itself has enough co-sponsors in both chambers to pass — assuming all would vote yes. But even with these ideal circumstances, New York Health still hasn’t come anywhere close to actually becoming law.

There’s a simple answer as to why, Rivera said. Well, the answer is simple, that is. Implementing a new health care system is complicated.

“This is not something that is going to happen easily,” the senator said. “What we’re looking to do here is to fundamentally reorganize the way that we deliver health care in the state of New York. That is not easy to do. There’s no other state that has done it. Anything that is complicated — that is intricate, that is as fundamentally important as this — is never going to be an easy thing.”

Perhaps the biggest stumbling is the idea people are so used to employer-based private health insurance, they couldn’t imagine a system that works any other way.

“If there’s a belief that that is the best that we can do, then that is very hard to break,” Rivera said. “And the insurance companies have been exceedingly effective at communicating this message over and over again. ‘I’ve got the little coverage that I’ve got. I don’t want to give that up for whatever you’re trying to convince me over there is available.’”

A good example of this, the lawmaker said, comes from public employee unions who are opposed to the bill because they don’t want to give up their health insurance. These are benefits unions like DC37 — the city’s largest union when it comes to public employees — won through hard-fought negotiations where they often had to give up wage increases.

Assemblyman Jeffrey Dinowitz co-sponsors New York Health in the lower chamber, but admitted to those attending the town hall they need the broad support of organized labor to pass the bill. The best way to win that support is by ensuring unions don’t lose any of the current coverage they will sacrifice under New York Health.

Although they still have a long way to go in winning broad support from organized labor, state Sen. Alessandra Biaggi says the New York State Nurses Association and 1199SEIU — both powerful unions — already back the bill.

Another hurdle the bill’s proponents have acknowledged in the past is getting the federal government to approve a Medicaid waiver for New York, needed to help fund the bill. Getting this waiver was nearly impossible when Donald Trump was still in the White House. But Trump has been gone for more than a year, and Rivera believes the Biden administration is far more willing to play ball.

“They have said that should such a bill be approved in the state of New York, and should a request of this type of waiver go to them, they would definitely be open to considering it,” Rivera said. “So, all of those things are positive.”

While the waiver would be helpful, Rivera and Gottfried believe New York Health could still be possible without it.

Something else that may be working in the bill’s favor this session, Rivera said, is that lawmakers are dealing with Gov. Kathy Hochul instead of her predecessor, Andrew Cuomo. Not only does Hochul’s administration seem far more interested in working with legislators on this issue, Rivera added, but her newly approved health commissioner Mary Bassett is a strong supporter of New York Health.

“The person that has to make the final determination is obviously the governor,” Rivera said. “But having somebody in her executive team who she trusts — who understands the technical aspects of this bill, the needs of this bill, and can then answer any questions you might have — that’s obviously a plus.”

Getting the bill passed this year, however, is going to take a massive amount of organizing and focus, Biaggi said.

“I just think that’s what it’s going to take,” Biaggi said. “So, if that means that the ask of all members is to bring it up in every conference, I think that’s not an unreasonable ask. I think it’s important that we really do that because, again, it has to be consistent.

“I’m always optimistic, (but) I also know that large initiatives take massive amounts of focus. And so, if this is the number one focus of this year, that’s where all the energy should go.”