Story of trees goes back a lot further than we realized 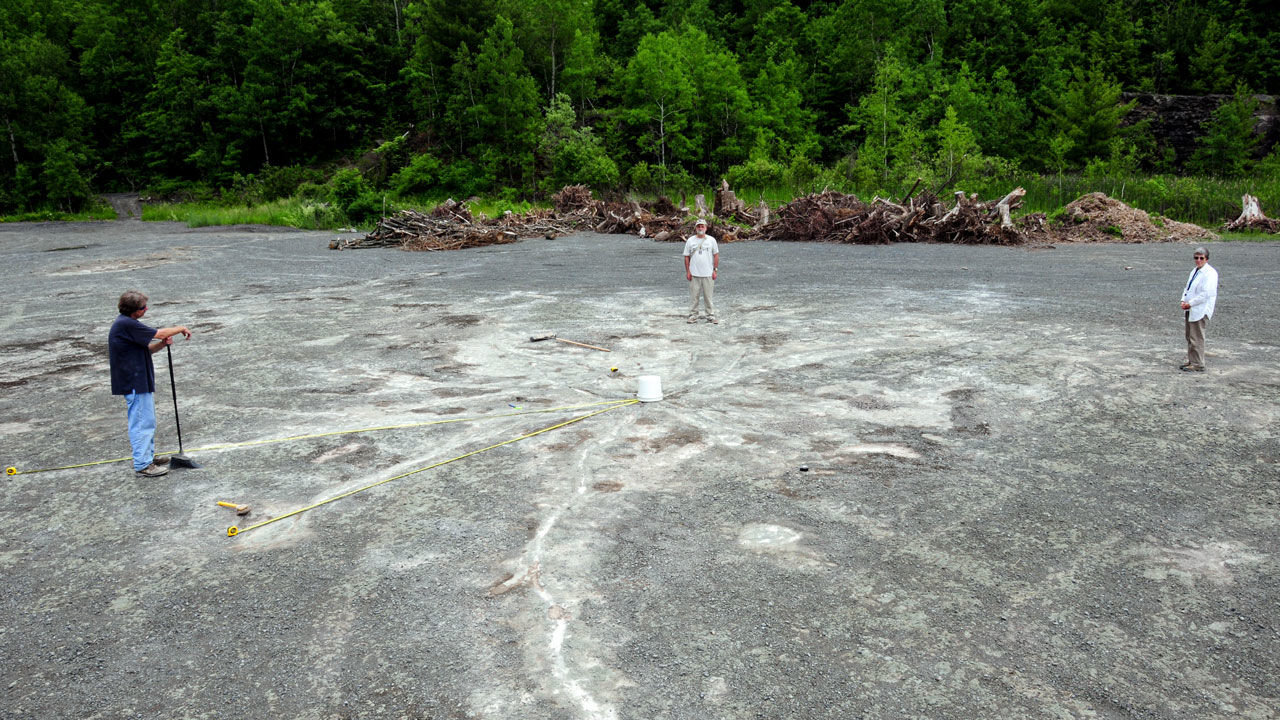 We are learning a lot about the history of trees in places not too far away, like this upstate excavation site in Cairo.
Courtesy of Charles Ver Straeten
By SURA JESELSOHN

The past disappears rapidly, even when there is limitless visual and print media attesting to it.

Today’s teenagers probably cannot imagine a world without cell phones, and I have trouble imagining my grandmother’s world where school was compulsory only through eighth grade. Imagine, now, trying to piece together a world from which we are separated by millions of years.

Riverside Quarry, the site of the original Eospermatopteris stumps, had been backfilled, and the site was therefore closed to paleontologists for roughly 100 years. However, in 2010, the floor of the quarry was exposed once again while work was being done on the Gilboa Dam. After draining the quarry of residual water, the quarry floor was cleaned further with the help of pressure hoses.

Grids were laid at regular distances — each carefully photographed — and a final paper map was created from those photographs showing the entire surface of the now-empty quarry, with each photographed fossil duly noted and penciled in.

Each grid in situ was then intensively examined by the scientists for all relevant features that had not shown up on the photos until approximately 126,000 square feet of Devonian forest had been thoroughly mapped.

As expected, there were many shallow depressions where the bases of the Eospermatopteris trees had grown surrounded by their numerous roots. The site also yielded fossil evidence of many large Aneurophytallean rhizomes, best described as a giant liana crawling along the ground, twisting around the trunk bases, and likely climbing into the trees. It has been suggested that they resemble the modern Monstera deliciosa.

The remains of one tree-sized clubmoss — class Lycopodiopsida — complete the inventory.

Another interesting candidate on the evolutionary road to full-size woody trees is the 80-foot tall Archaeopteris, originally dated from the Upper Devonian through the Lower Carboniferous periods (all told, between 232 and 383 million years ago). The name Archaeopteris is a combination of two Greek words — archaios, meaning “ancient,” and pteris meaning “fern,” referencing the fern-like leafy fronds.

When discussing the trajectory of evolution, the general story outline in the popular imagination is one where less complex life forms gradually acquire more modern, complex and recognizable elements. Therefore, the characteristics of our Eospermatopteris — shallow roots, a relatively low height (approximately 26 feet tall), lack of a true bark, and a lack of woody tissues running throughout the trunk —would place make it seem less evolved.

The engineering requirements for a tall tree are not simple, and some are not even obvious. The trunk needs to be rigid in order to provide proper support, acquiring this strength from woody tissue. An extra woody collar is necessary at the junction of a branch and trunk, buttressing said branches, which would otherwise crack off due to weight stress.

The branches additionally require internal layers of wood that dovetail (interweave) at these junctures, again necessary to prevent breakage.

Trees require an external tough bark to protect the phloem — the vascular structure that brings the sugars formed by photosynthesis to the rest of the tree, and which run close to the surface of the trunk.

In one aspect, Archaeopteris was similar to other local plants in that it reproduced not by seeds, but by spores. However, the spores were of two different sizes and genders, a condition known as “heterospory.” (Plant reproduction is extremely complicated, and suffice it to say, these spores seem to prefigure modern seed-plant reproduction).

Returning to the Archaeopteris, considerable detective work was required to determine the actual appearance of the complete tree by correctly connecting dissociated tree parts. Again, it was Sir John William Dawson, in 1871, who described the genus based on the frond-like leaves. Meanwhile, petrified wood samples were being found, and in 1911, Russian paleontologist Mikhail Dimitrevich Zalessky described a Ukrainian find, designating it Callixylon.

Finally, in the 1960s, Charles B. Beck demonstrated that both sets of specimens belonged to the same tree.

Meanwhile, in 1993, fossilized botanic specimens were found at an old quarry in Cairo, a mere 28 miles from Gilboa upstate.

Although containing Eospermatopteris specimens, other large and more modern root systems were fully in evidence. These tree roots were 6 inches in diameter, spreading in large circles with an approximate radius of 18 feet from the trunk sited in the circle’s center, and were determined to be from Archaeopteris, adding another characteristic of modern trees to those already listed.

More startling, however, is the age of these finds. Current dating of the Cairo fossils places the fully formed Archaeopteris  specimens to approximately 385 million years ago, making them, at least, 2 million years older than the Gilboa finds, and pushing the evolution of modern trees back even earlier than previously believed!