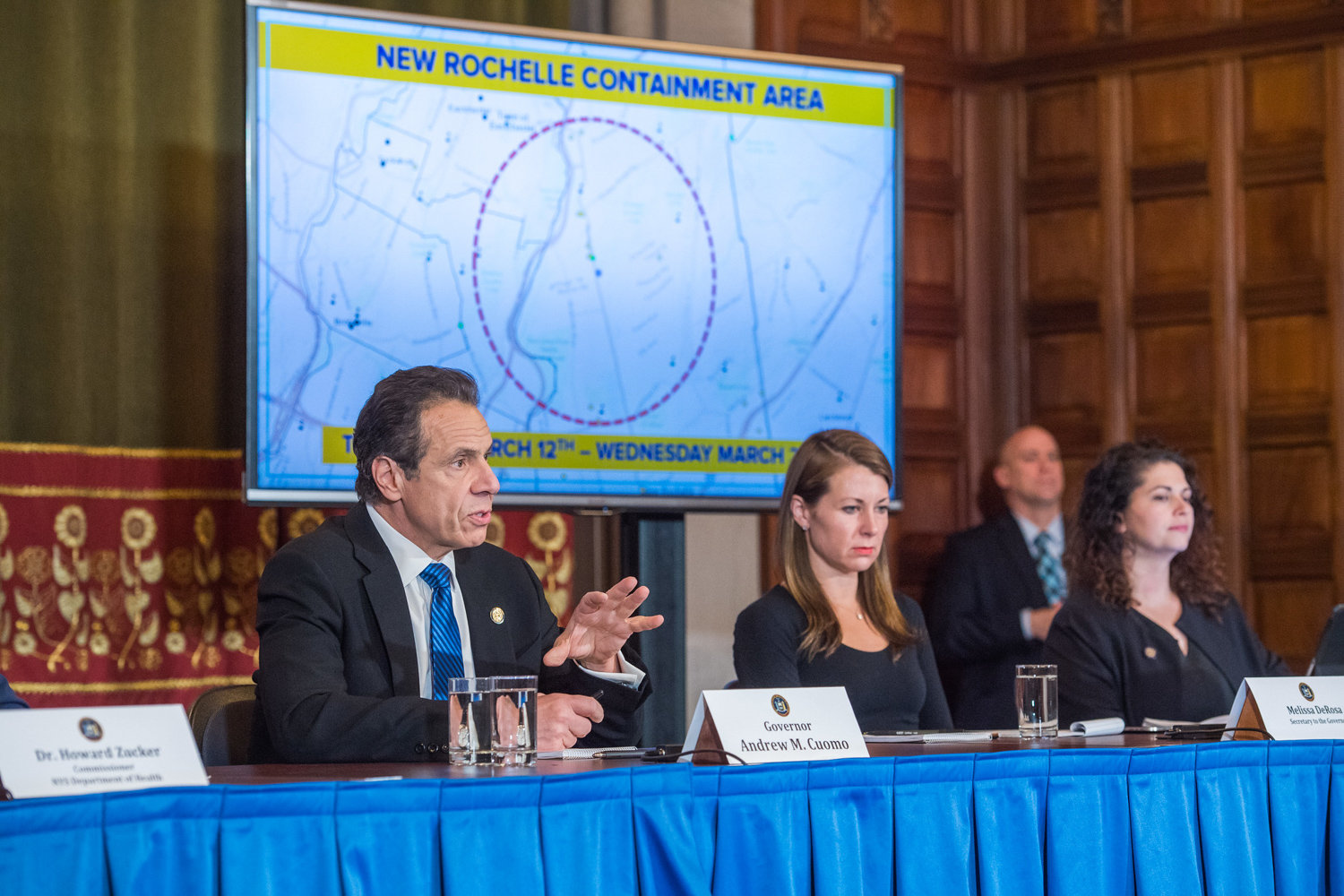 Gov. Andrew Cuomo announces he's shutting down what would become New York's first coronavirus hotspot around New Rochelle on March 10. At the same time, Mayor Bill de Blasio was getting his first warnings from city health commissioner Oxiris Barbot about the need to start shutting some services down — recommendations de Blasio initially resisted.
Courtesy of Darren McGee/Office
By ANTHONY CAPOTE

Numbers have been looking good as far as infection rates and hospitalizations go. But what the future holds for New York City’s hospital system could be a major concern, especially as it braces for both a long economic recovery and a potential second wave of the coronavirus pandemic.

As states and economies have opened across the country, COVID-19 cases have increased. That uptick has spurred fears about whether the city’s health care system can withstand a second wave of the virus, even as the state overall has bucked the national trends in its own reopening.

Concerns are coming from two different places — the virus itself, and the economic devastation left in its wake. Some, like the city’s comptroller Scott Stringer, want to place blame at the feet of City Hall for failing to properly prepare for the pandemic in the first place.

Stringer launched a probe last month into the city’s response to the virus in the early days of the crisis. In announcing his investigation, Stringer said he wanted access to documents related to the city’s decision-making structure as well as prescribed measures for preventing the virus’ spread, whether or not the city implemented them.

“This sprawling pandemic has caused our economy to shut down, bringing massive job losses and depressing city revenue just as we face an acute demand for services,” Stringer said in a statement at the time. “Every single New Yorker deserves to know what city government did to prepare and prevent the worst.”

But now it seems Stringer faces some pushback. On June 11, the comptroller issued subpoenas for documents including emails and office memorandums, which he says he needs to complete his investigation. The probe, Stringer’s office claims, aims to get answers about where the city succeeded in responding to the virus and where it faced the largest problems.

“The administration owes New Yorkers an explanation of what they knew about this deadly virus, when they knew it, and what they did about it,” Stringer said. “The administration’s refusal to comply with our investigation is unacceptable. I am therefore issuing a subpoena for these documents, which should be turned over to our investigators expeditiously. Open and honest government is what New Yorkers deserve, and my office demands nothing less.”

Perhaps one of the biggest issues in New York’s hospitals, at least according to New York State Nursing Association’s Carl Ginsburg, was determining how to manage the large swells of patients in some areas that experienced the most impact, like Jacobi Medical Center in the Bronx. Many of those issues, he added, have not disappeared and will be even further exacerbated if and when a second wave of the virus hits New York.

But Councilman Andrew Cohen disagrees with this analysis of how the city handled the pandemic. He said many of the issues New York faced in the earliest and worst days of the virus were unforeseen and are only made clearer by hindsight.

Many of the issues the city government faced in its pandemic response, Cohen argued, had to do with a lack of support from the federal government. While the councilman echoed Mayor Bill de Blasio’s frequent complaint about the Trump administration, he added city council would do its best to meet the needs of the health care system in the wake of an impending budgetary crisis — a crisis he says will likely be far worse than many have anticipated.

“Balancing all of these priorities is going to be excruciatingly difficult,” Cohen said. “The state is facing its own deficit, which it is trying to offload on the city, which is also going to be challenging.”

While Cohen said the city council would do its best to fund COVID-19 response efforts — specifically paying the test and trace corps — making that happen with the current revenue shortfalls will be difficult. It likely will lead to budget cuts in nearly every capital project and department in New York.

Government officials at all levels have been criticized for their slow response to the virus. de Blasio was first urged by his health commissioner, Oxiris Barbot, to start shutting down schools and restaurants as early as March 10, according to Politico. At the same time, Gov. Andrew Cuomo had shut down schools and churches around New Rochelle, which had become the state’s first hotspot, which also shuttered SAR High School and SAR Academy in Riverdale.

President Trump, on the other hand, told reporters on March 10 that the country was prepared and “we’re doing a great job with it,” according to ABC. “It will go away. Stay calm, it will go away.”

By the time Cuomo ordered a state shutdown on March 20, there were more than 7,000 confirmed cases in the state.