This time around, SAR is much quicker to act 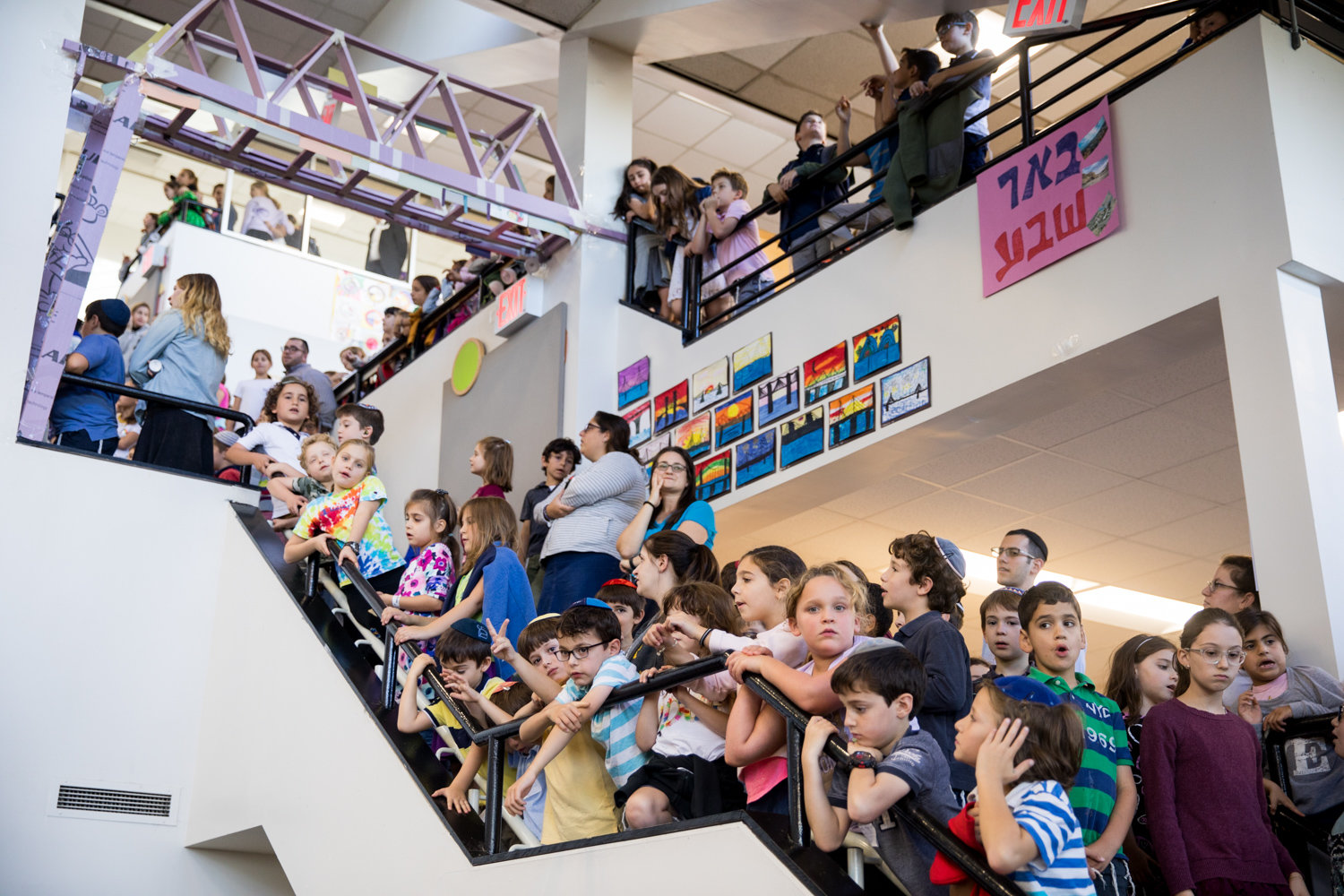 Students and faculty at SAR Academy attend an assembly meant to inspire hope and unity at the end of a turbulent week. The school said it fired former associate principal Jonathan Skolnick on Sept. 14 for charges related to child pornography and child exploitation.
JULIUS CONSTANTINE MOTAL 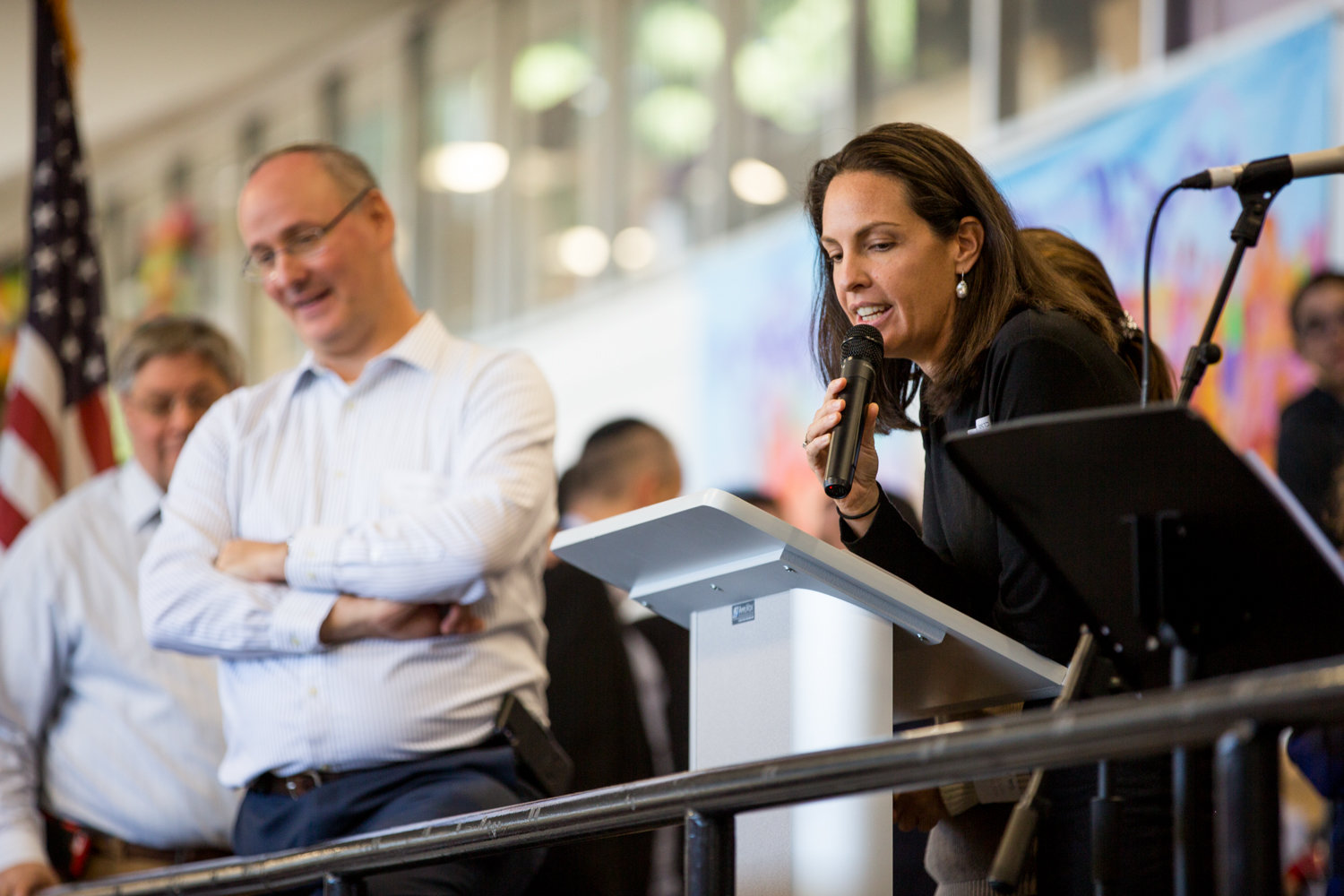 Rebecca Ostro Nagata, associate principal for general studies at SAR Academy’s middle school, talks about making it through a difficult time at an assembly on Sept. 20. The school said it fired former associate principal Jonathan Skolnick on Sept. 14 for charges related to child pornography and sexual exploitation.
JULIUS CONSTANTINE MOTAL 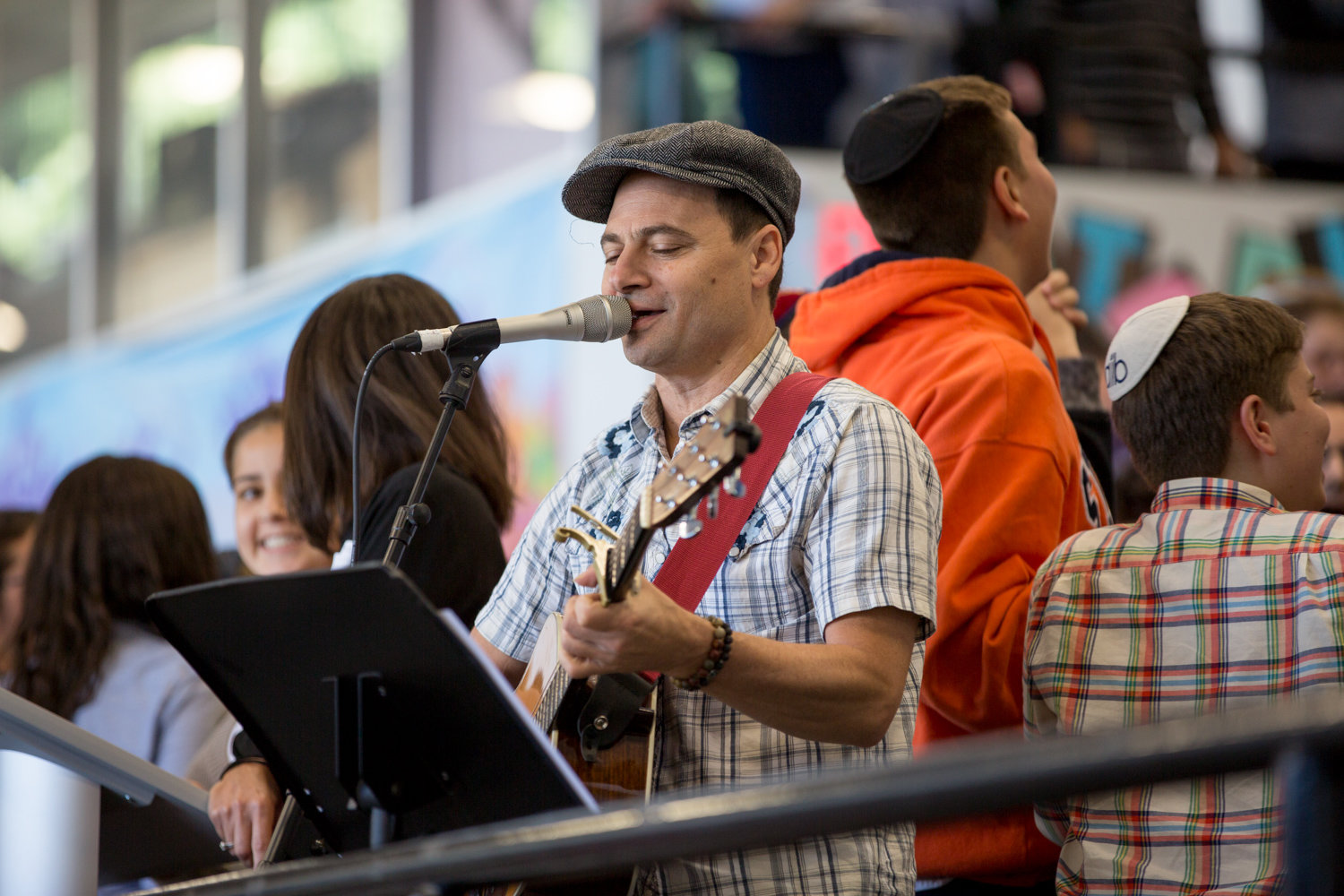 Noah Solomon plays music during an assembly meant to inspire hope and unity after a turbulent week at SAR Academy that included the arrest and termination of an associate principal, Jonathan Skolnick.
JULIUS CONSTANTINE MOTAL 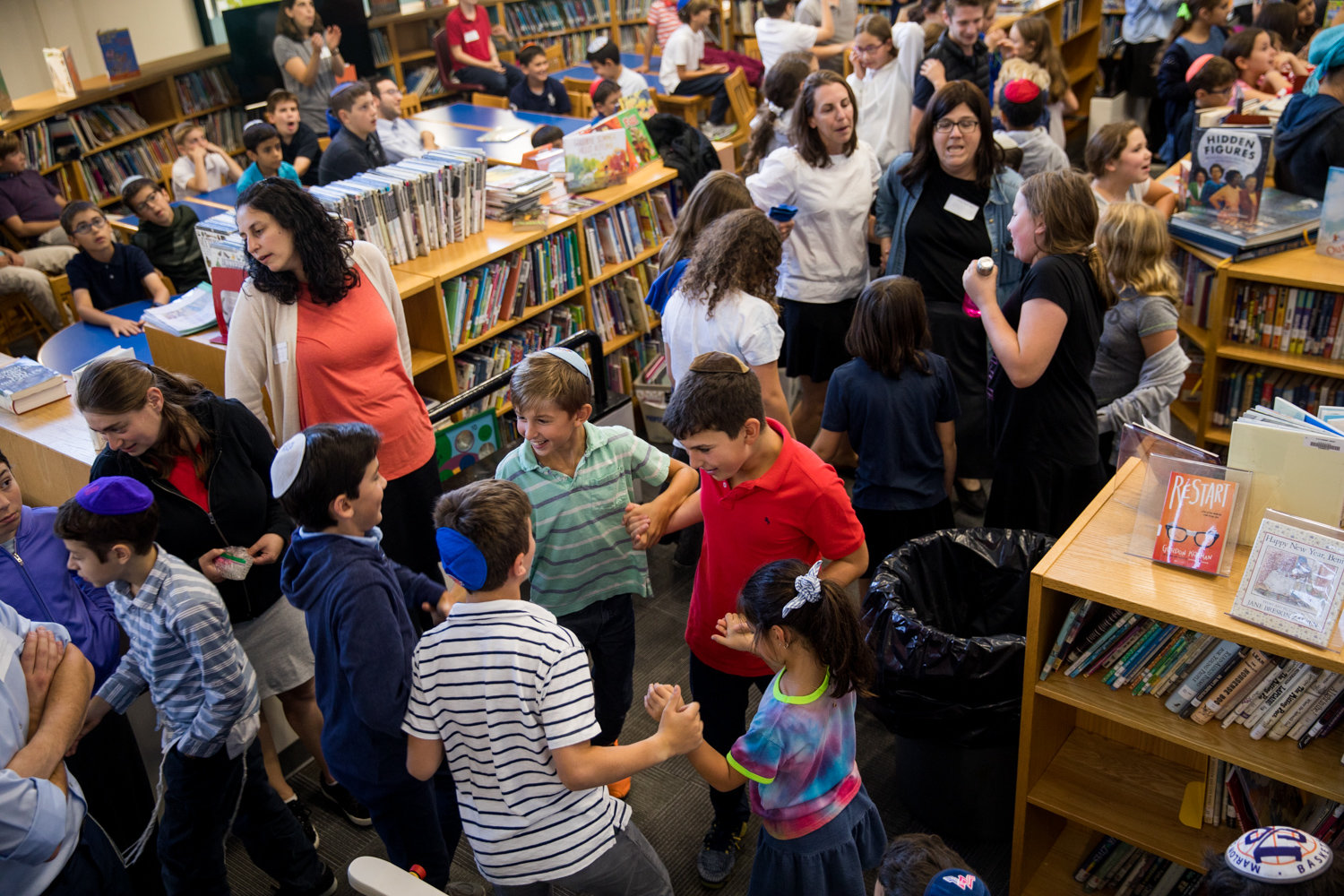 Students and faculty dance to music during an assembly meant to inspire hope and unity after a turbulent week at SAR Academy. Local Jewish leaders came together to offer their support to the school’s community as it grappled with the news SAR’s former associate principal Jonathan Skolnick was arrested on charges related to child pornography and child exploitation.
JULIUS CONSTANTINE MOTAL 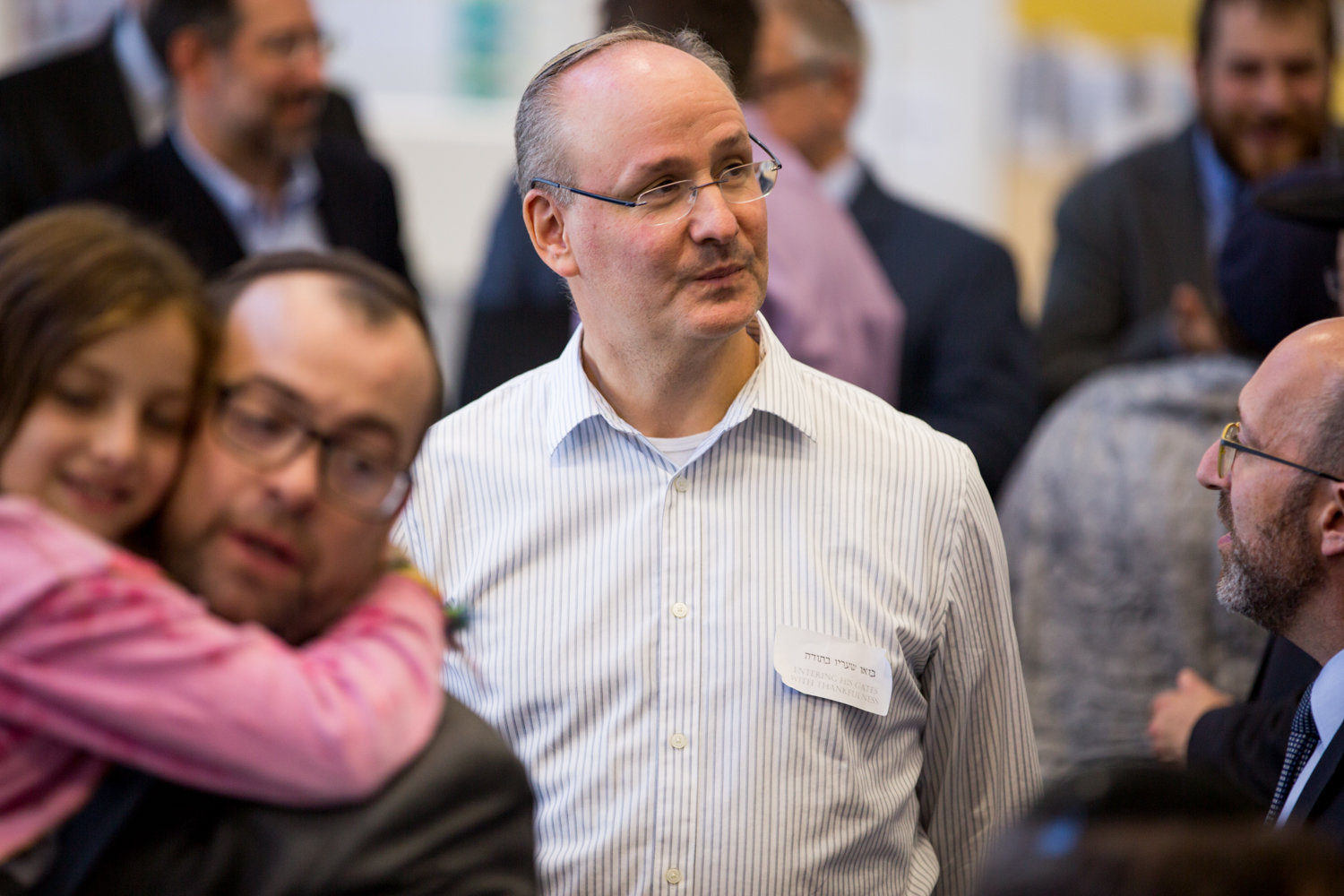 SAR Academy principal Binyamin Krauss has met with many parents and community members to hear their concerns since the Sept. 14 firing of former associate principal Jonathan Skolnick after he was arrested on charges related to child pornography and child exploitation.
JULIUS CONSTANTINE MOTAL
Previous Next
By HEATHER J. SMITH & KIRSTYN BRENDLEN

News that the FBI accused a now former associate principal at Salanter Akiba Riverdale Academy with production of child pornography among other charges comes on the heels of new developments in an old case of alleged abuse at the school.

Jonathan Skolnick, an educator responsible for Judaic studies in SAR’s middle school, was arrested Sept. 14 on charges he solicited sexually explicit images from boys by posing online as teenaged girls. Investigators believe Skolnick may have communicated with as many as 25 boys, although authorities say the final number could be much higher.

Although not much is known about Skolnick’s alleged victims, investigators say some may also be students at SAR or Skolnick’s former employer, Yeshiva of Flatbush Joel Braverman High School in Brooklyn.

But Skolnick wasn’t the first SAR Academy administrator to come under fire because of alleged crimes against children. Three former students filed a civil lawsuit earlier this month under the new Child Victims Act — a law temporarily allowing some child sexual abuse victims to bring legal cases against people and institutions they believe perpetrated the abuse even though legal statute of limitations may have previously expired.

These students claim former SAR Academy administrators knew of and covered up alleged sexual abuse by former administrator Stanley Rosenfeld decades ago. Although Rosenfeld was removed from his position in the 1970s, he was allowed to continue working with SAR students, even being welcomed back as an educator in the 1980s.

The reaction of SAR leaders to Skolnick’s arrest — immediately firing him and communicating with parents and students — is like night and day compared to how the Rosenfeld accusations were handled.

Private schools — many of them with a religious foundation — are perceived by some as safer for children. But the number of high-profile news stories about sexual abuse and sometimes the subsequent cover-up in private and religious schools seems to be a greater number than those in public schools.

But is that true?

“I’d say the majority of cases do involve the church and private schools,” said Gary Greenberg, founder of Fighting for Children PAC, an advocate for the Child Victims Act and Erin’s Law, which pushes for more education of child sexual abuse in schools.

“There are some cases of public schools, and one of the things we insisted on (in child sex abuse legislation) is that it could cover public schools as well.”

When abuse was discovered in Catholic schools and churches, leadership there didn’t report it, Greenberg said. Instead, the abuser was moved to another school or parish where abuse often happened again.

In the past, schools commonly covered up abuse to preserve their reputation — especially with private schools whose income depended on its public perception, Greenberg said. Horace Mann School, for example, denied for years allegations that systemic child sexual abuse occurred until leaders there were forced to admit it.

“I think it was just the way that society dealt with child abuse for a long time — no one wants to deal with it,” Greenberg said. “If someone was abused, they wanted to protect the reputation of the school. They didn’t believe the kids.”

The adults in the children’s lives were supposed to protect them, Greenberg said. Instead, they would dismiss the allegations as a lack of understanding about what happened, or even worse, that it was just a dream.

“So it’s part of the society to keep it a secret and cover it up,” Greenberg said. “Sweep it under the rug. And it’s the kids who suffer. They turn into adults that suffer.”

Although the first impulse is to hide it, sexual abuse must be made public, said Asher Lovy. He’s the organizing director for Za’akah, which supports victims of child abuse in the Orthodox Jewish community. He himself is a survivor of abuse and testified to state lawmakers while they were considering the Child Victims Act about the difficulties victims in the Orthodox community have in bringing such issues to light and get help.

How a school’s reputation is affected by sexual abuse by an employee depends largely on how the school’s administration responds to it.

“I think that if SAR isn’t found to be culpable for anything in this case, what ultimately be remembered is how this was handled — positively,” Lovy said of the Skolnick arrest. “And if it goes well, it may serve as a model for other schools.”

Educating school employees gives them permission to report inappropriate behaviors, she said. Without it, colleagues are more likely to dismiss their observations as misunderstanding or speculation.

Require teachers to report suspected abuse, Shakeshaft said, and they’re far more likely to do so.

“Training says if you see those behaviors, you need to report it,” she said. “It will be investigated, and if there’s something going on, fine. And if not, good.”

Changes can be made in hiring, too. If an applicant has never been through the criminal justice system, it won’t show up in a background check. If the police were never contacted in an abuse case — which they often are not — the only way to find out about someone’s history is by talking to their former employer.

Shakeshaft was stunned to learn how often schools never called former supervisors to ask if there was any suspect behavior in a potential hire.

“Give me information, I need to know about this person,” she said. “Have there ever been allegations to your knowledge? Why did this person leave?”

Sexual abuse education is vital for the children who may be targeted by predators. If they’re taught concepts like good and bad touch, body autonomy, and unsafe situations, experts and advocates say it’s far more likely the abuse won’t happen to begin with.

“This piece of legislation is so important because it teaches kids to identify and tell adults about abuse before it happens,” Biaggi said. “The fact that we had to fight so long to get this passed is embarrassing.”

But Erin’s Law is only for public schools. Advocates are pushing to implement similar programs in private and religious schools. It will forewarn potential victims, and it will deter potential abusers as well.

“It lets child abusers know they can no longer act with impunity,” Lovy said.

“Everybody — teachers, the students, the parents, everybody else — is informed, so abusers can no long continue doing this without the risk of getting caught.”