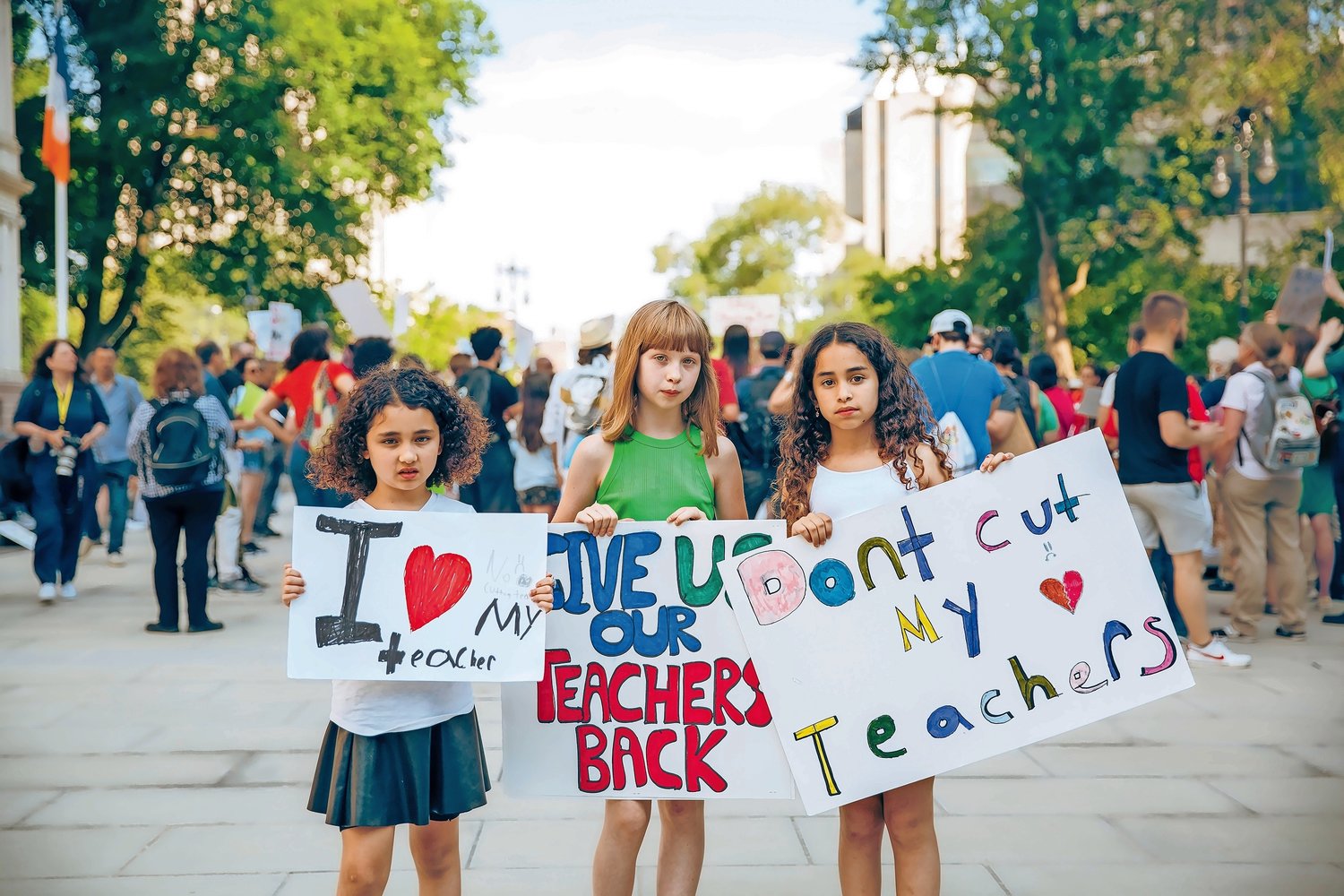 Emma Hoff, middle, a fourth-grader, at P.S. 24 Spuyten Duyvil, joins her friends in a show of support for her teachers at a June 24 rally in front of city hall.
Brian Asare 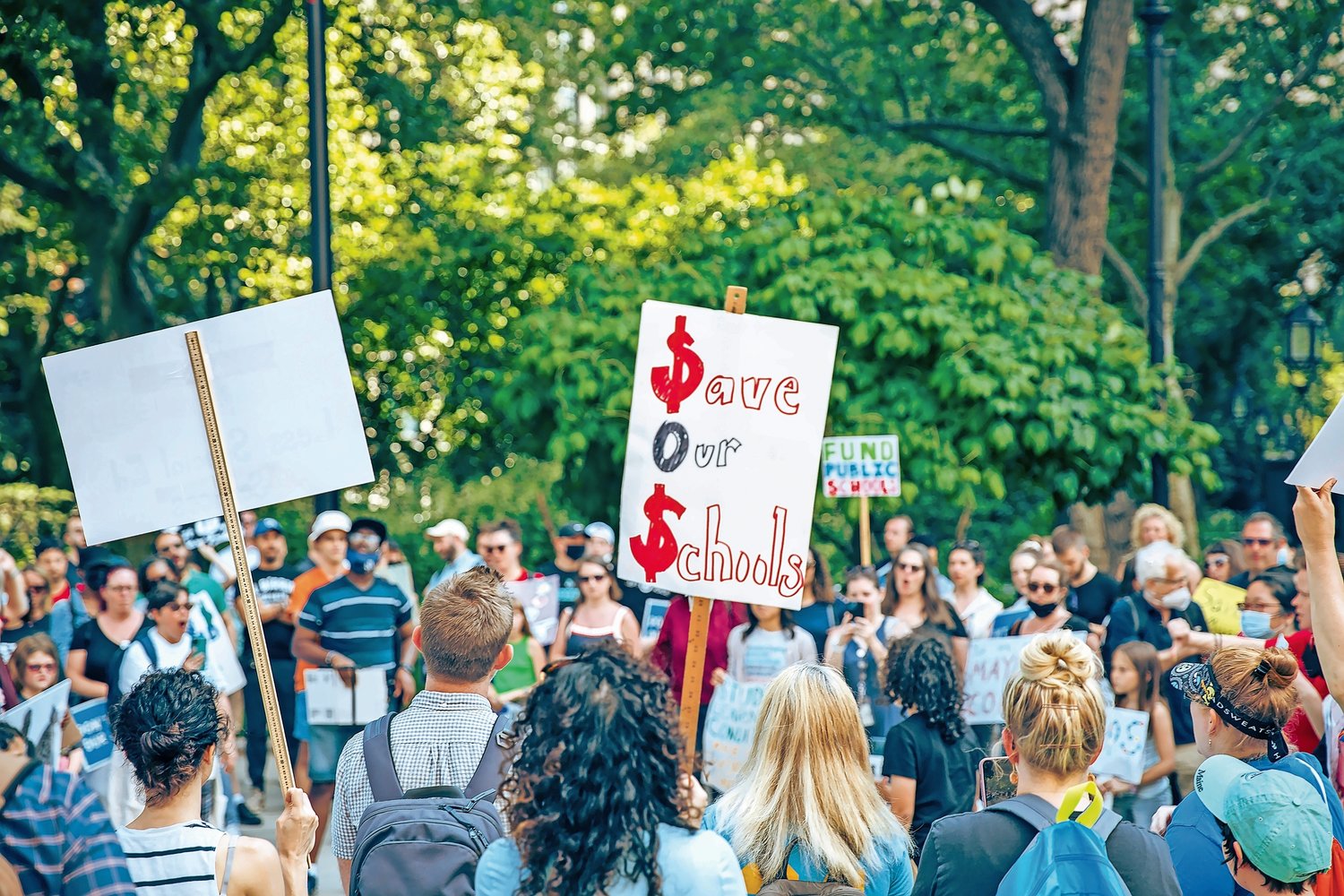 Students and teachers rally June 24 in front of city hall of over school budgt cuts.
Brian Asare
Previous Next
By Stacy Driks

All Emma Hoff wanted to do was play the saxophone next year.

But that won’t happen for the 10-year-old.

Band class is no more at her school, P.S. 24 Spuyten Duyvil, part of broader cuts made Mayor Eric Adams as he looks to slash $215 million from the school budget. The reason had nothing to do with Emma, but instead on what Adams described as  declining enrollment projections.

Although it’s one of just 1,900 schools in New York City, P.S. 24 is expected to feel those cuts deeply. One flyer being passed around the school in the past week claimed more than $903,056 — or 16 percent — of the Spuyten Duyvil school’s budget will be lost.

The cuts is expected to result in increased class sizes, reduction of teachers, and the loss of extracurricular courses that might be considered non-scholastic.

“The band had a really good effect on kids, and everybody’s been really enjoying it and looking forward to it, including me,” Emma said. “If we lose (our teachers), we might also lose the other extracurricular curricular music program, which is choir.”

Yet, to Adams, these are just adjustments, and Emma’s teachers who are “excessed” are not considered cuts, because they are merely losing their positions, not their paychecks.

P.S. 24 was targeted because its campus population dropped by nearly 130 students since 2018. It’s part of a wider student shrinkage, where the city’s education department believes schools — including charters — are nearly 10-percent smaller than they were before the pandemic.

As classes come to a close, educators, students and parents are worried about what might happen next to their schools. Extracurricular activities are often a tool to express creativity. Students who took band, for example, picked up an instrument and began to learn.

“I always say arts should not be extracurricular — they should be curricular,” Councilman Eric Dinowitz told The Riverdale Press last April.

After learning about the cuts, Emma took matters into her own hands, hoping others would hear her voice.

“I started just by asking the people at my lunch table: Would you like to sign my petition?’” she said. “Kids started lining up in the lunchroom.”

The fourth-grader received 71 signatures in hopes of retaining their three “excessed” teachers back for the next academic year along with their band class.

Those teachers remain in the education department’s system, where they will be transferred to other schools that lack staffing.

Emma intended to give the petition to her principal, Steven Schwartz, Assemblyman Jeffrey Dinowitz and Adams. She stated in the petition that it is the state’s job to fund and support schools, but leaders are instead doing the complete opposite.

Many students at P.S. 24 were unaware of the budget cuts. Emma took time to educate her classmates, something that also caught the attention of her father, James Hoff.

“It’s upsetting that these cuts are happening,” said Hoff, himself an educator in the CUNY system. “This money that is supposed to go to the school that my daughter attends.”

James learned a lot from his own students who spent the past two years learning remotely under the coronavirus pandemic. They described that ordeal as “horrible.” because they lost entire years of their education.

“Others have lost family members,” he said. “They’re traumatized.”

With the budget cuts, students could receive less help.

Michael Mulgrew, president of the United Federation of Teachers, said these cuts are coming at incredibly hard times, especially when city officials have high expectations of city schools. He joined three educators during a city council committee hearing last week, telling its members these budget cuts will do more harm than good.

“We’re still in the pandemic,” James said. “Now we can go back to the level of funding before … is outrageous.”

As a parent, James doesn’t like the idea that city agencies and the mayor treat schools as if the pandemic is over.

The COVID-19 numbers are flat, but they aren’t negligible. Going back to normal is completely insane.

Mulgrew took that sentiment and turned it into a rally outside city hall. Emma and her father were there.

The fourth-grader told a crowd of 250 educators, politicians and union members what she thought about the cuts. As she stood in the middle of a circle surrounded by protesters holding posters in front of city hall, Emma’s confidence grew from the support.