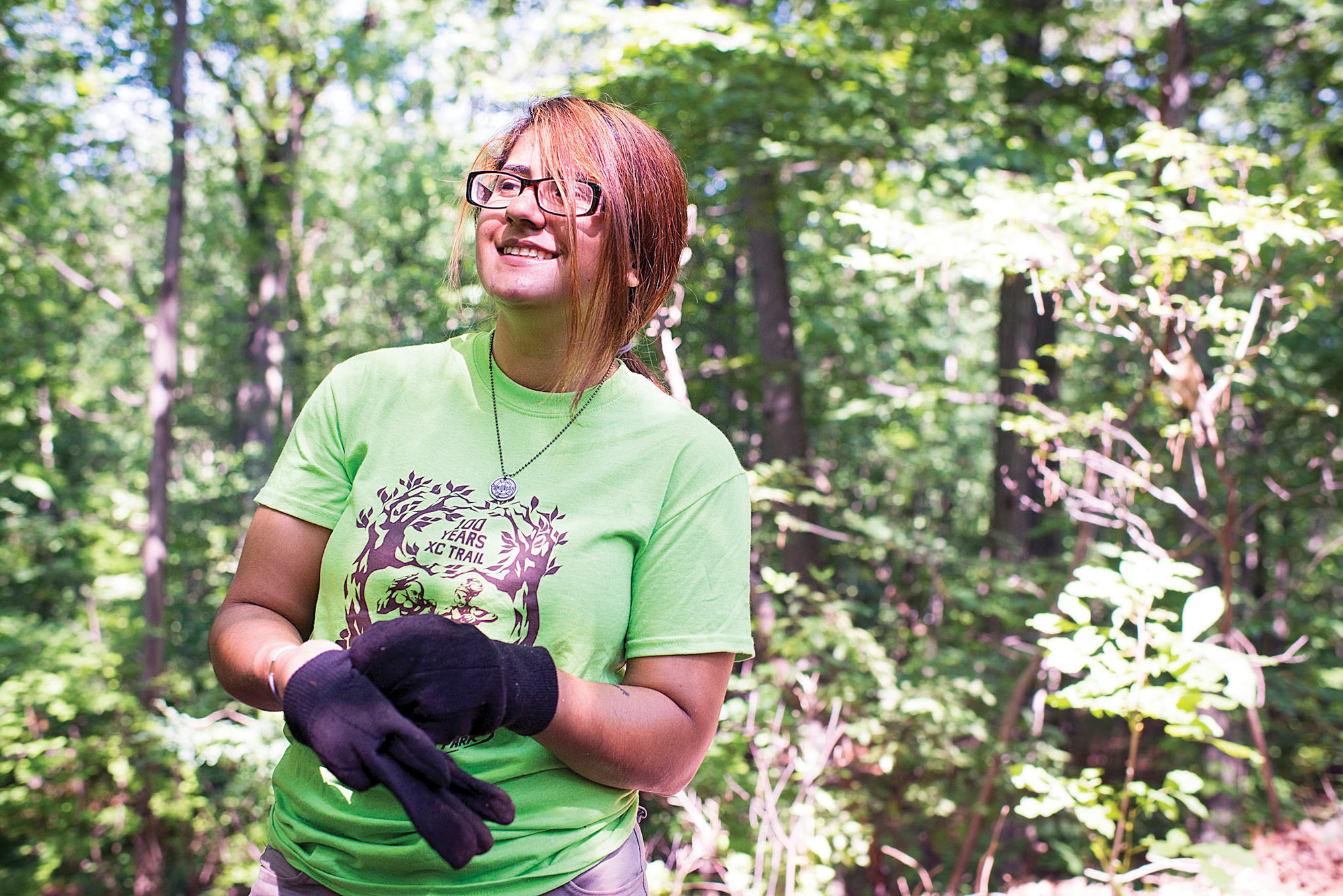 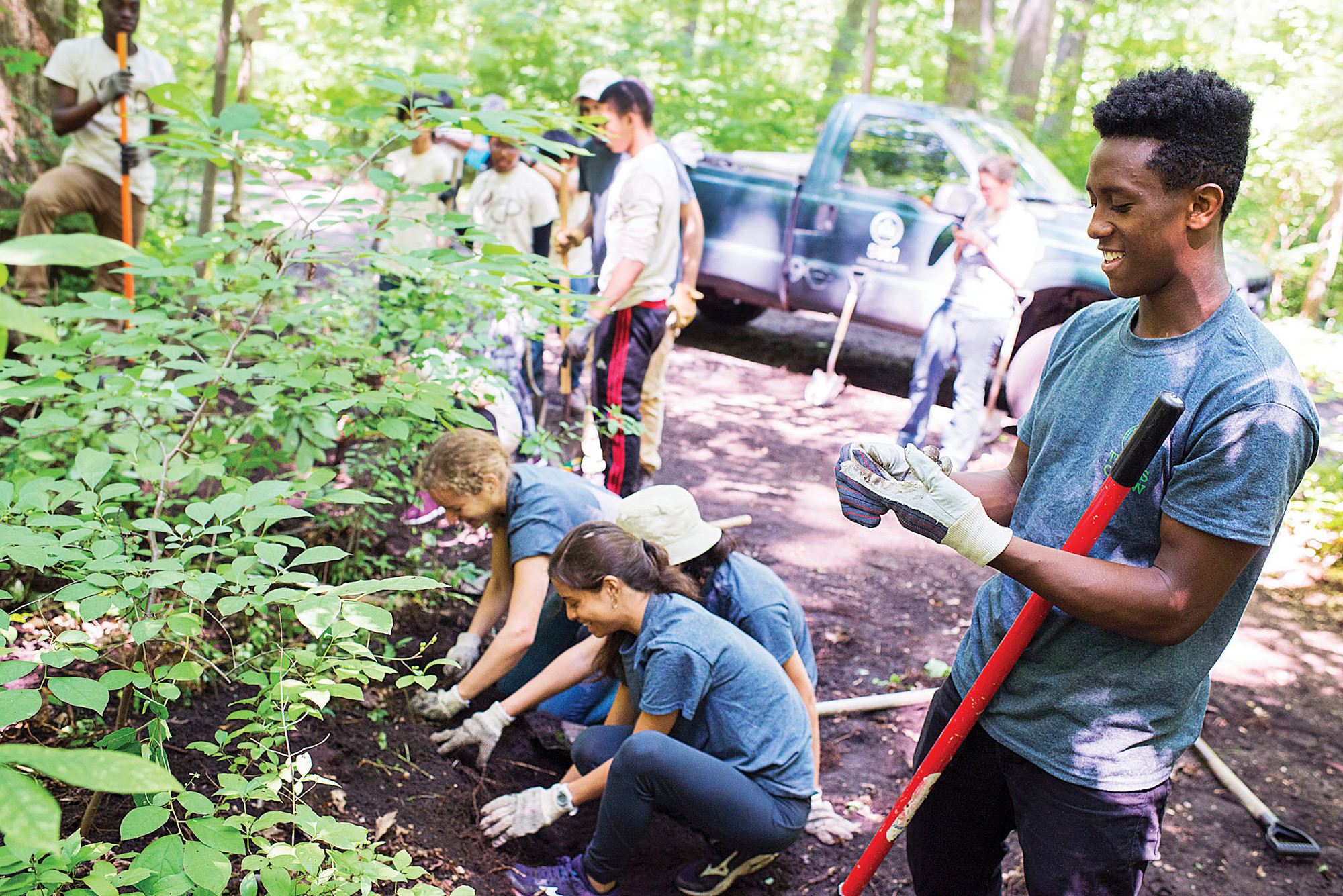 Kenyah Wiggins, a Truman High School student who lives in Coop City, helps to clear mud and weeds from an overgrown trail in Van Cortlandt Park on July 16.
Adrian Fussell / The Riverdale Press

Steven Francis, Marcus Anderson, and Curtis Antiwi pose for a photo together as they clear overgrown trails in Van Cortlandt Park on July 16.
Adrian Fussell / The Riverdale Press

Ayanna Branchcomb, wearing white and soon to be a senior at the High School of American Studies, helps rake weeds and mud away from an overgrown trail in Van Cortlandt Park on July 16.
Adrian Fussell / The Riverdale Press

Part of the trails cleared by a group of young men and women in Van Cortlandt Park on July 16 as part of a summer jobs program.
Adrian Fussell / The Riverdale Press
Previous Next
By Isabel Angell

On a recent morning, a group of teenagers were hard at work in Van Cortlandt Park. Some were raking dirt off trails to make them easier to pass through, while others were pruning invasive vines.

These teenagers are part of two programs that are running side by side at the park this summer: Green Jobs 4 Youth (run by the Van Cortlandt Conservancy) and Teen Trails Crew (run by Friends of Van Cortlandt). Both are paid internships, designed for students who come from disadvantaged backgrounds.

Both programs train the students in trail management, while Green Jobs 4 Youth also focuses on forest restoration and horticulture and has a college readiness component where the students take a summer course on conservation at Lehman College. The goal is for graduates to leave the internships with marketable skills and a passion for the environment.

Stacey Granda is one of those graduates.

Ms. Granda, 20, is going into her third year at Lehman College. Standing on a set of stairs in the middle of the woods in Van Cortlandt on July 16, she said she grew up coming to the park, taking advantage of everything it had to offer.

“They had canoeing for free — I got to explore the lake that way — they had bicycling, they had barefoot dancing in the lot, just so many activities,” she recalled.

Ms. Granda joined the Teen Trail Crew while she was in high school at DeWitt Clinton, after a friend brought her to a tree-planting day at Vannie. After a few years with the group, she joined Green Jobs 4 Youth. Last year, Paulina Mohamed, the director of Green Jobs 4 Youth, had a baby and Ms. Granda stepped up to run the program in the meantime. She was 19.

“It was really cool, but it felt really natural to me. A lot of the people that I worked with were really supportive… If I ever needed help, Margot or the people from Parks Department would always make sure I had everything I would need, so I was super well-prepared,” Ms. Granda said, referencing Margot Perron, the president of the Van Cortlandt Park Conservancy.

Now, Ms. Granda is the assistant director of Green Jobs 4 Youth. Her passion for the outdoors has taken her to Lehman, where she majors in environmental science and geographic information sciences.