Entrepreneurs discuss their hopes for a better borough 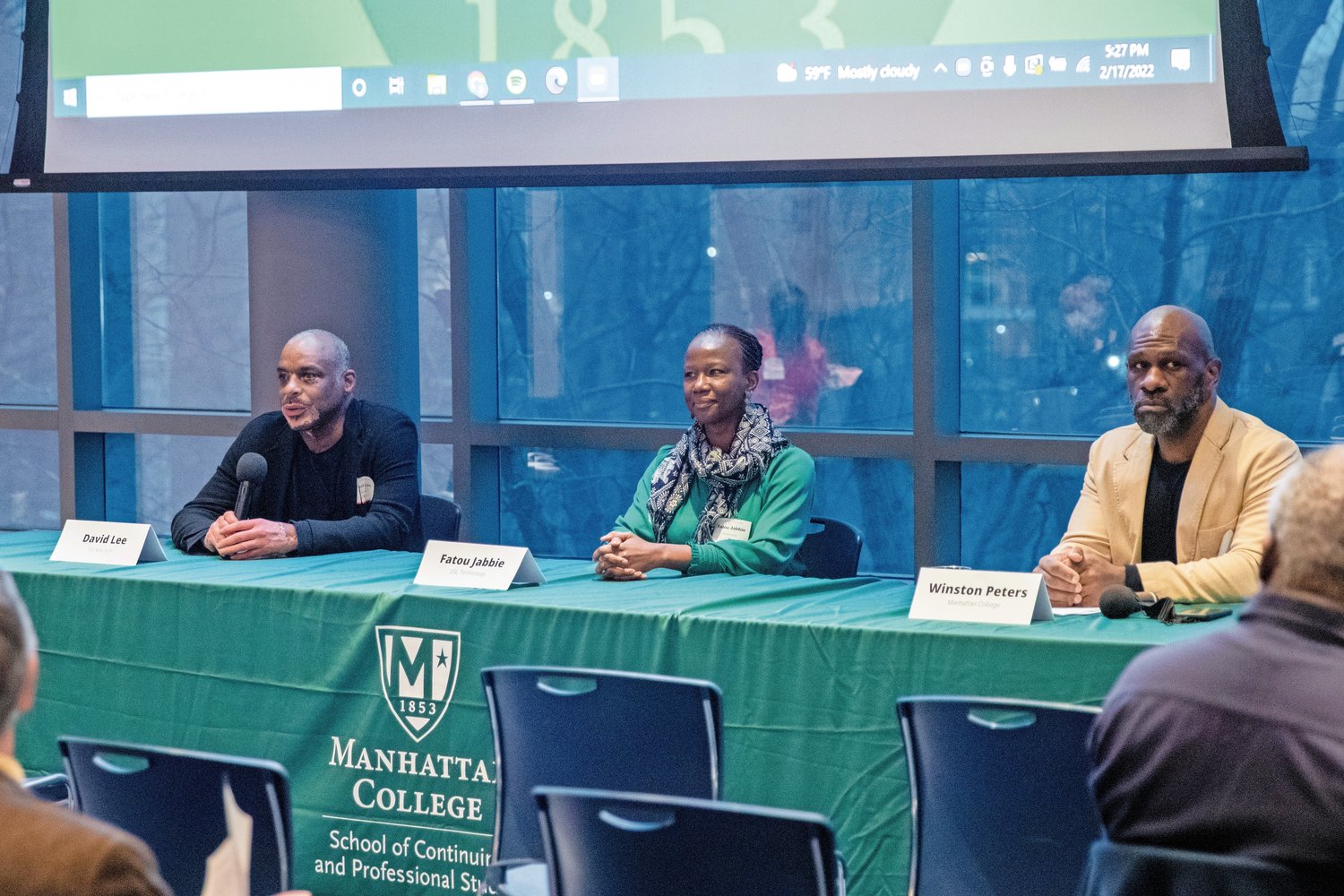 Business Entrepreneurs David Lee, left, Fatou Jabbie, middle, and Joel Mejia (not shown) joined a panel at the Kelly Commons building in Manhattan College recently to discuss their business in the Bronx and why they had an interest in the borough. Their similarities do not differ with moderator and Manhattan College professor Winston Peters, right.
BRIAN ASARE
By STACY DRIKS

The Kelly Commons building at Manhattan College was filled with entrepreneurs who are striving to have a better tomorrow— some might even call it inspiration. Continuing and professional studies students recently listened as entrepreneur after entrepreneur told them about their path to business.

Having partnered with the BronXchange – a network of organizations that collaborate to build a foundation for economic democracy – Manhattan College was hoping to bring together the entrepreneurs with the students so they could share and collaborate and create an equitable economy that works for everyone.

Winston Peters, an adjunct professor and program director of Entrepreneurs at Manhattan College, moderated the discussion last month. He expressed that the purpose of this event was to highlight the importance of Bronx-based businesses and how they are doing.

“Showing that the Bronx is in a business and economic renaissance growing from local to global,” said Peters.

Business stakeholders Fatou Jabbie, David Lee and Joel Mejia joined together as a panel to share their experiences as a startup, their expertise and their journey.

Being a business owner for more than a decade, Jabbie, CEO and founder of USL Technology, mentioned her firm provides technical efficiency and uses sustainability for energy engineering.

Jabbie migrated to the USA 30 years ago and the first borough in New York she went to was the South Bronx, which served as an inflection point.

“I moved to New York during the financial crisis that I decided was the right time to start my business,” Jabbie chuckled, “But what better city to start your own business during a financial meltdown.”

Active fashion is for people who want to work out in style and be on a sophisticated level— especially when that level never existed, that is what Lee’s business is all about. With over 30 years of experience Lee co-founded KD New York, which makes plant-based dancewear and knits. Dancers and celebrities wear his fabrics worldwide.

Lee claims his company started organically, him and his partners never thought to create a business—they enjoyed making clothing and sold it to their friends and family. Eventually their first factory began in the Bronx—he then moved to New Jersey.

A year before the pandemic started, Lee was still based in the Bronx but he said the commute was not worth it. He thought he was saving money by renting a warehouse in New Jersey but the pivot didn’t help him at all.

“I started talking to make contacts in New York and all of them said I shouldn’t (do it),” he said.

“(The) genesis really came from me wanting to show my young daughter how to grow food.’ Mejia said.

What else do these entrepreneurs have in common? Sustainability.

As entrepreneurs they create their business without harming the environment. The importance of bringing good value to their customers and clients are their priority. Jabbie expresses that she educates and engages society on the importance of sustainability, which is important now with businesses coming out of the pandemic.

The research for the pandemic essentially started from animals, which most people now are leaning away from which makes the plant industries rise in success.

For almost a decade Lee has been working on a plant-based alternative to cashmere. The company has begun to be more popular because of the pandemic.

“It just makes so much sense,” Lee said. He’s named it “vegetable cashmere.”

Mejia thinks the word “sustainability” doesn’t apply to most cases; he prefers the word “resilient.” Hydroponics is one tool to combat climate change. It grows vegetables with less water but it grows a lot father than traditional farming.

Audience members praised the panelist for sharing their experiences because it taught them many things about business and the environment.

A tip for the fresh entrepreneurs?