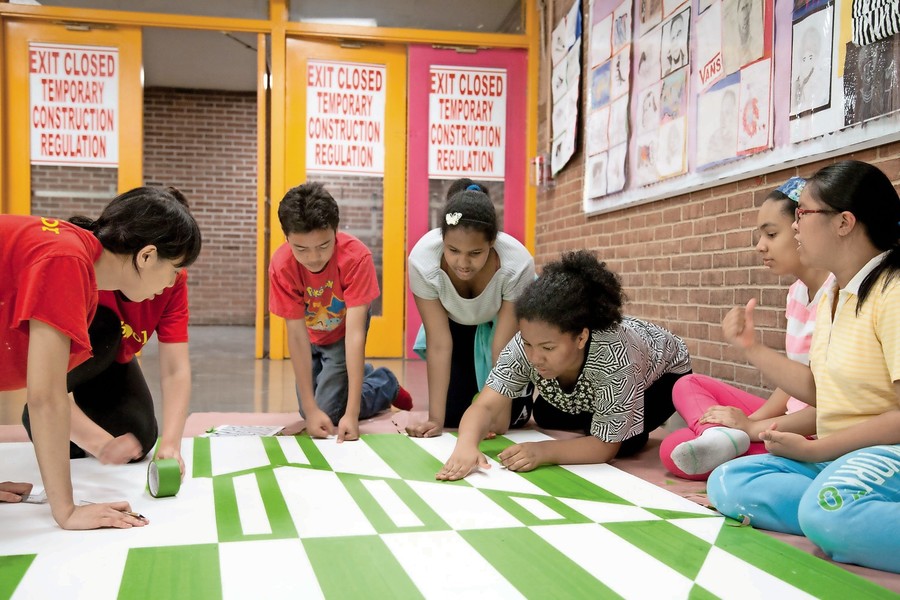 Have fun. Spend time with friends. Become a part of the school’s history.

Those were some of the reasons students at M.S. 244 The New School for Leadership and the Arts gave for being a part of the schools’ art project. A group of five students will reproduce the 1952 mural “’Untitled” by Cuban-American artist Carmen Herrera.

The abstract painting is a series of black and white stripes that appear to be different triangular shapes in parts of the piece.

“It’s like an optical illusion,” said Camille Elizalde, who is taking part in the project. “It’s all straight lines and the colors are different. The placement of the colors makes it look like they are not even.”

The deceptively simple and minimalist work was not so easy to paint, Elizalde said. The students drew the mural out on regular sheets of paper first, and found creating the different-sized black and white triangular sections was harder than it looked.

In addition to spending a Saturday with classmates on the project, “Untitled” would be an opportunity for students to give back to their middle school.

Alberto, who likes to draw animation-style art, added the project would be included on her resume when she applies to high schools that have strong arts programs.

Elizalde agreed, adding when she returns to the school years into the future, seeing the mural will bring back good memories of her time there.

“This is a great opportunity for our kids to not only to work on this mural and contribute to the school but to also learn about who Carmen Herrera is,” Eduardo Mora, M.S. 244’s principal, said.

“This is something that we are going to launch next year in our art classes and try to incorporate it into our (English language arts) class, certain articles on what minimalism is and how it this reflected, and possibly make some math connections,” he said. “The whole idea of lines and geometry and things like that.”

Herrera, an abstract painter, was born in Cuba and studied art, architecture and art history in Havana and Paris. Following her marriage to Jesse Loewenthal in 1939, she moved to New York City.

She didn’t receive wide acclaim for her work until she was in her 90s and continues to work almost daily in her studio, according to the Whitney Museum’s website.

Herrera’s life and career were the subject of the 2015 documentary “The 100 Years Show.”

The nonprofit Publicolor, which works with at-risk students through design-based programming, organized the project with M.S. 244. It is part of founder Ruth Shuman’s community museum initiative to have famous works of art displayed in underserved schools.

When completed and hung, the 8-by-12-foot mural will hang on the wall leading to the school’s auditorium. Tony Bechara, a longtime friend of Herrera and fellow artist, contacted the organization about having students reproduce Hererra’s work.

Last fall, the Whitney Museum in Manhattan exhibited work from Herrera — the first major showing of the 102-year-old artist’s work in nearly two decades — including “Untitled.”

“It teaches them that they can come from another background and be able to be an artist and be able to engage in the community doing public work,” Natasha Seng, a manager and studio director at the Manhattan based Publicolor said. Students can learn about art at all economic levels and can use their culture and backgrounds as an inspiration for their works.

“During this political climate, it’s so important to engage students in art and design and have them really appreciate and learn about contemporary artists and designers,” she said. “And, Carmen Herrera is such a legend. A lot of her designs come from famous artists that we all aspire to be or try to imitate her work.”