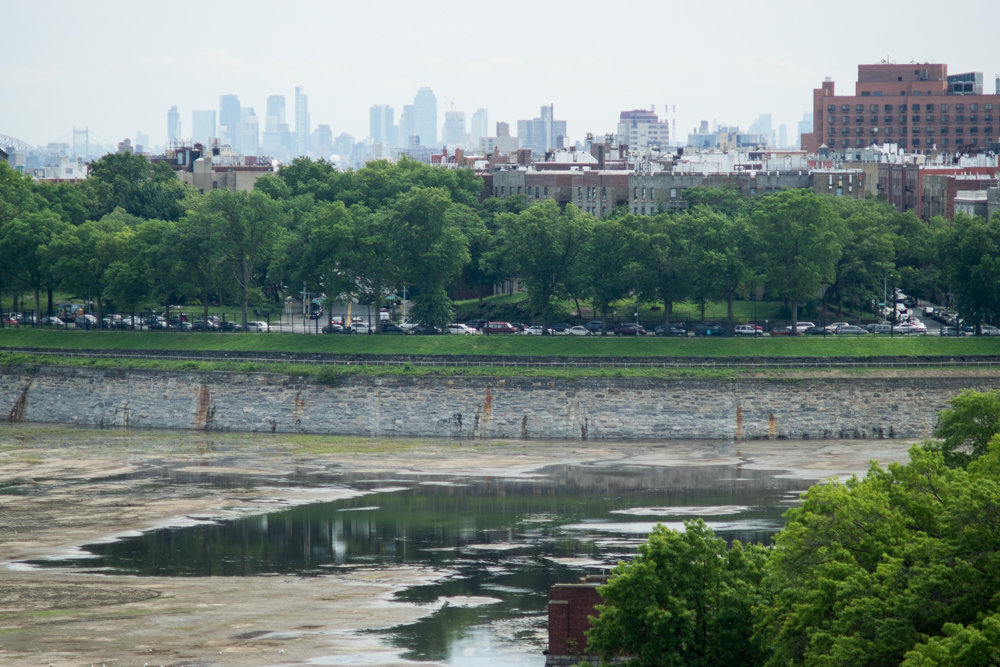 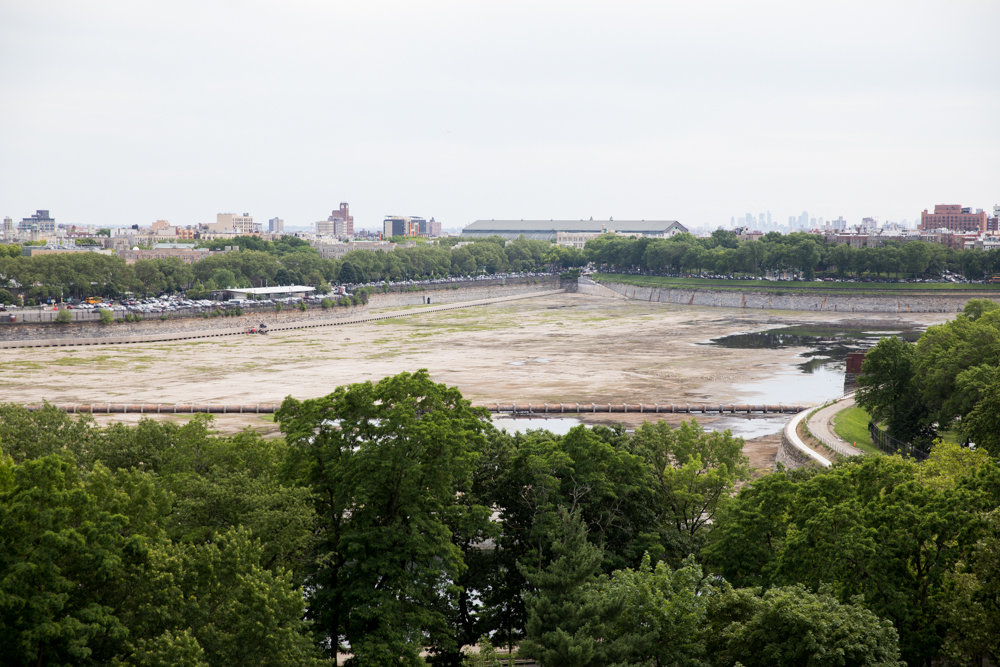 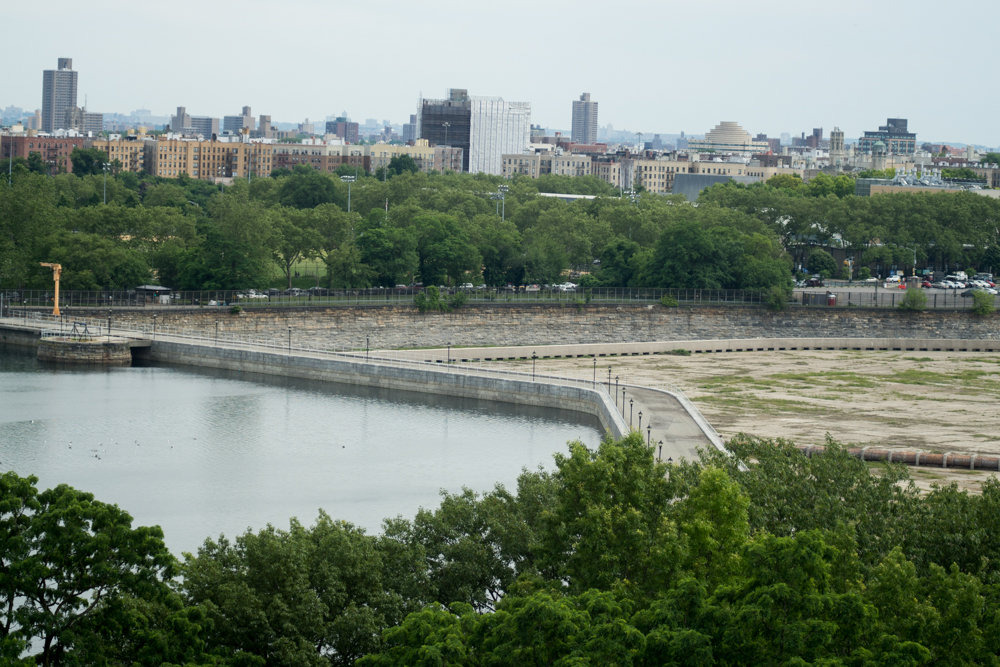 A walkway separates the north basin from the south in the Jerome Park Reservoir, long a contested battleground for residents and city officials. Repair work has left the south basin empty, but once those repairs are complete, it will be the north basin that’s empty, much to the chagrin of neighbors.
Previous Next
By JOSEPH KONIG

Alicia West said it twice. Then, Bernard Daly tried to explain it.

Members of Community Board 8’s environment and sanitation committee and the roughly 100-person audience kept asking clarifying questions. They couldn’t believe what they were hearing.

Finally, the reality of what the city’s environmental protection department was saying sunk in.

“Long term, the plan is to have the north basin empty,” said Daly, the longtime construction manager for the Croton Water Filtration Plant project at Van Cortlandt Park.

Daly delivered the news June 17 with West, the DEP’s director of public design outreach director, revealing the north basin of the Jerome Park Reservoir would remain empty in perpetuity post-construction.

Those in attendance — many of whom have invested years of their lives educating themselves and fighting the city on the reservoir project — were, for the most part, furious and bewildered.

“Do you understand what you just said?” one woman shouted in the moments immediately after the room realized what Daly and West were saying.

Right now, the reservoir’s north basin is filled with water. A dividing wall separates it from the much-larger southern basin, which remains empty as it undergoes repairs lasting until about 2025.

The south basin will be filled with water again, but the other basin will be emptied to act as a failsafe in case anything goes wrong at the Croton plant or the reservoir itself. If there’s an unexpected shutdown, the city will need to direct the flow of the water somewhere, West explained.

“If both basins were full,” she said, “there would be nowhere for the water to go.”

That argument did not go over well. Advocates in the never-ending battle generally want two things: preservation of the reservoir’s aesthetic character, and access. They weren’t surprised DEP was offering neither of those, and they weren’t happy.

“You have to change the filtration to match the design of the reservoir, not the other way around,” Anne Marie Garti said to applause. Garti is a founding member of the Jerome Park Conservancy and says she sacrificed her career to fight for the reservoir.

“Would you do this in Central Park?” She asked. “Then you wouldn’t do it here. You have to treat it with that same respect. You can’t do this.”

In two letters obtained by The Riverdale Press, an official for the state’s historic preservation office outlines steps DEP needs to take in order to preserve “historic resources.” Included in both letters — one from 2015 and another from 2016 — is that a concrete wall the DEP plans to install along the entirety of the reservoir’s eastern wall must, “under normal operations, be below the water line.”

Garti argued leaving the north basin empty would violate this condition, although recommendations from the historic preservation office are not necessarily legally binding.

DEP officials and the communities that surround the Jerome Park Reservoir have long been at war, first over the unwanted construction of the Croton plant, and later over access to the reservoir. The Croton plant was eventually constructed on the Woodlawn side of Van Cortlandt Park, but access to the reservoir has been cut off since World War II over security concerns.

Part of the city’s drinking water supply flows through the reservoir, and DEP is extremely protective, going so far as to raise fears that pigeon feces could poison New York water drinkers.

Advocates say they negotiated a deal with the DEP in the 1990s to eventually open the park’s trails to the public, but nothing ever came of it. On a handful of occasions since 2004, DEP negotiated a trial run of community access. In 2015, guards armed with assault rifles greeted visitors, including BronxNet personality Gary Axelbank, who lives nearby.

“This reservoir should’ve been taken out of commission,” said Axelbank, who argued the reservoir would better serve the Bronx as a park, a la the reservoir in Central Park. Unlike its Manhattan counterpart, however, Jerome Park’s reservoir is connected to New York’s drinking water supply.

“What the DEP is doing is behaving as if they are not responsible to us,” Axelbank said.

The completion of reservoir repairs is still years away, but as the observers of this project note, these things tend to run behind schedule and over budget. In the meantime, community leaders and members are beginning to sort out a plan of action.

CB8 chair Rosemary Ginty along with her counterparts from Community Board 7, Jean Hill, and Community Board 12’s Bill Hall. Each promised their respective community boards would vote to condemn the DEP’s decision.

“We’re not going to accept this presentation right now,” CB8 environment and sanitation committee chair Bob Fanuzzi told DEP. “This will turn a historic site into an eyesore. We can’t accept that.”