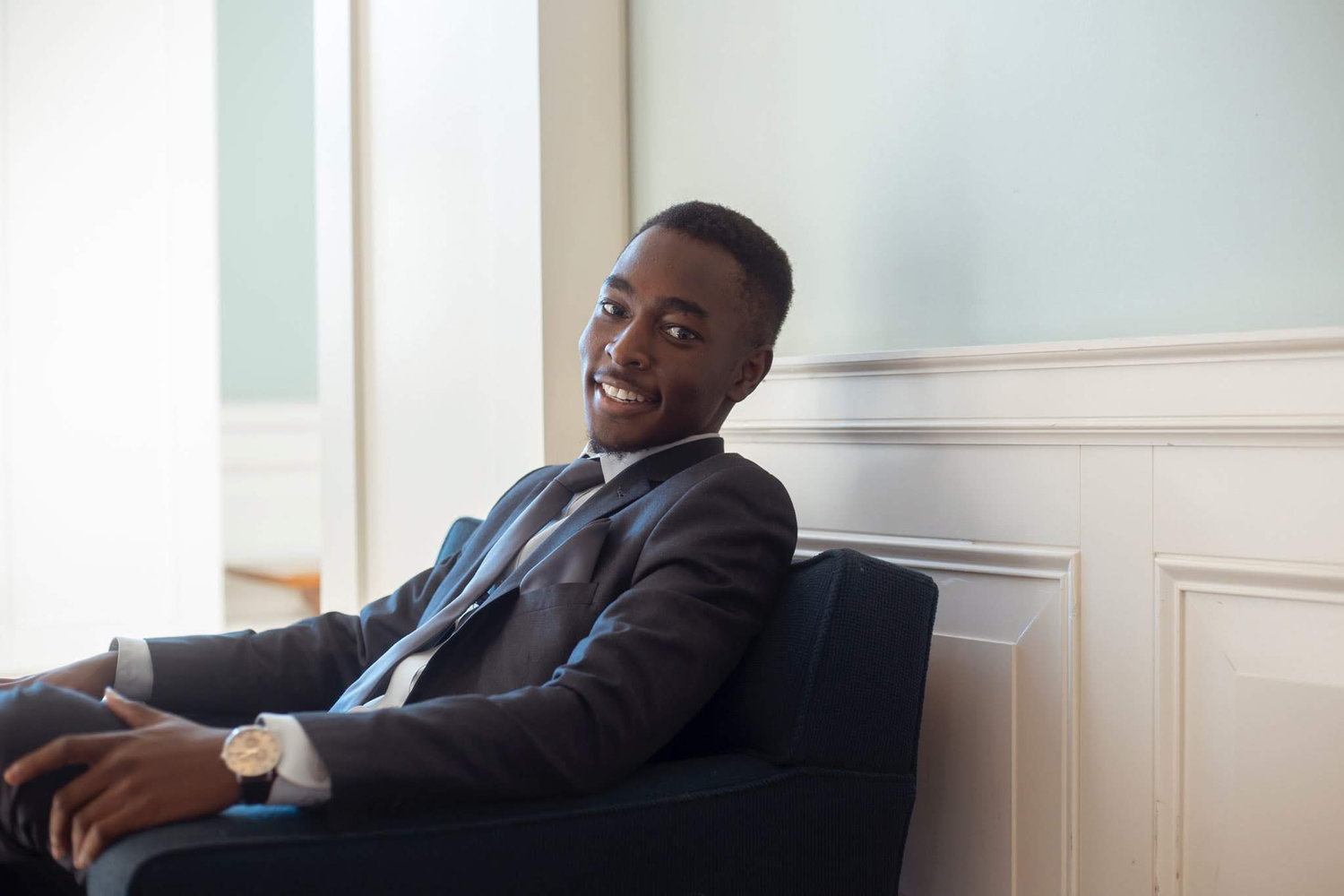 Hussein Abdul was selected to speak at his Lehman College graduation. Now he’s taking a break from school before aiming for his master's degree. As a first-generation college graduate, he believes the Bronx made him into the person he is today.
Courtesy of James Taylor 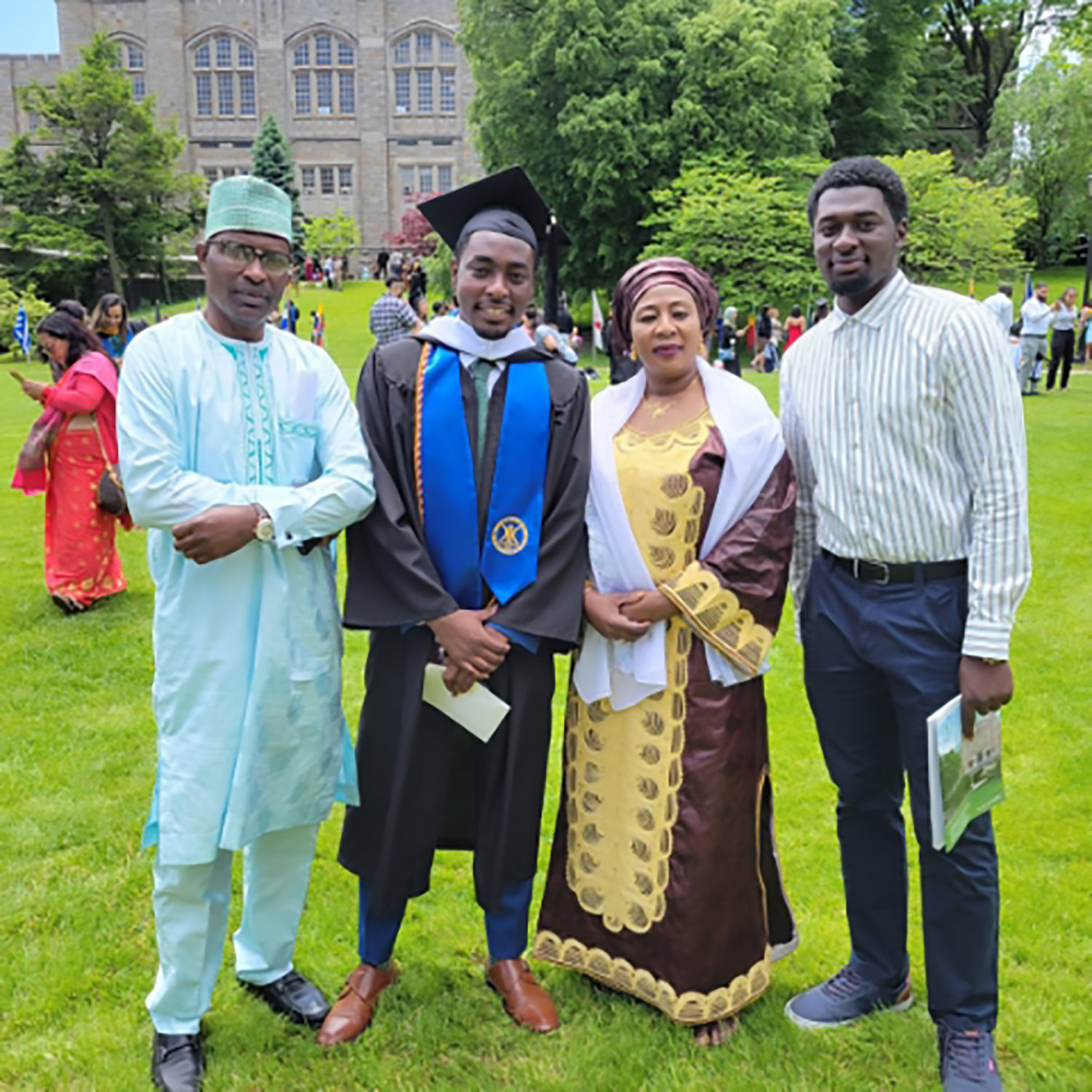 Hussein Abdul's family, from left at the Lehman College graduation, include his father Abdul Hussein, his mother Zalia Musah, and his brother Hashim Abdul. Hussein collected his political science degree on May 26 in a ceremony that was kept as a surprise from Abdul's parents. On top of that, they were not aware he was chosen as one of the ceremony’s speakers.
Courtesy of Iris Roman
Previous Next

I’m not going to lie, this would have been easier over Zoom. I can’t turn off my camera now.”
HUSSEIN ABDUL, Lehman commencement speaker
By Stacy Driks

Two sons. Two commencements. One week. Except these blessed parents didn’t expect to see one of the sons actually graduate from college, let alone give a speech.

As a first-generation college student, Hussein Abdul endured many obstacles pursuing his degree. After graduating from Bronx Community College, Hussein enrolled in the political science program at Lehman College, quickly participating in on-campus life before fighting a medical crisis that almost brought everything to a screeching halt.

But keeping Hussein’s parents in the dark about what was happening at Lehman last month was all by design. He hatched a plan with his brother Hashim to tell their parents the younger sibling’s graduation from BCC was May 26, so they could take off from work. In reality, Hashim walked onto the stage June 3 to pick up his associate’s degree that will allow him to follow in Hussein’s footsteps to get his business administration degree at Lehman.

Hussein’s parents — Abdul and Zalia Musah — were worried because they got the day off work.

Now what are they going to do?

“I couldn’t stop crying, from that day,” Zalia said later. “It was the first shock, then the other one was the speech. I couldn’t even stand up with a video to record it. I’m telling you, I couldn’t do it.”

That’s right. Not only was Hussein getting his degree, but he also was chosen to speak at the ceremony itself. He was a member of CUNY’s University Student Senate through his days at BCC.

“One issue that gave me a lot of attention was the library at Bronx Community College,” Hussein said. “There’s a moment where the library hours were cut because of budget cuts. That was when the student government, at the time, felt we had to say something about it.”

Hussein interacted with other CUNY students during that process, but found Lehman a unique school, being the only four-year public college in the Bronx. It also was  place where he could relate with students trying to get to the next level. Sharing the same background.

Conversing with other CUNY schools, Hussein felt the most comfortable at Lehman. He felt more at home.

Pressure can be placed on students labeled as first-generation college students because so much is expected for them to achieve.

“I’m ready for the challenge, and I feel blessed to go further than my parents ever could,” Hashim said.

Students in college at a point in their life seek help from their parents. But sometimes, that’s just not possible.

“I don’t have any education like them,” Zalia said of her sons. “I’m so blessed to see them, and pray for them to go higher.”

Hashim instead relied on his big brother to mentor him.

“I didn’t know what I wanted to do, or major, but I knew definitely I wanted to go to college,” Hashim said. “Having him going through his experience, he was better to advise me of where I want to go.”

’Made by the Bronx’

Hussein describes himself as someone who was “made by the Bronx.” Although his parents are from Ghana, Hussein’s experience growing up in the borough allowed him to make friends — something he considers a part of his life, and his development as a person.

For his commencement speech, Hussein represented not only himself, but his graduating Class of 2022 as well.

“I’m not going to lie, this would have been easier over Zoom,” he joked at the beginning of his remarks. “I can’t turn off my camera now.”

Hussein applied for a chance to speak at the beginning of his last semester. It provided what he described was the best opportunity to end the academic year.

Applicants were judged on a speech they had to write and submit, Lehman spokeswoman Lisa Hirschfield said. Judges were able to pare the list down to just a few. And then Hussein worked his way to the top.

Hussein’s life changed during his sophomore year of high school in the South Bronx.

Sickle cell anemia was robbing his blood stream of much-needed oxygen, and managing the disease — not just treating it — seemed to make the rest of his life screech to a full stop.

He was so proud of his perfect class attendance. Then he needed to take off multiple days for chemotherapy, and then later, a bone marrow transplant.

If left untreated, Hussein was at high risk of pain, and even worse, stroke.

They learned about the prospect of treating the condition with a bone marrow procedure after listening to a doctor discuss it on the radio. But this time, it was Hashim’s turn to step in.

He was a perfect match for the transplant, and it was a success. However, chemotherapy complications rose again, keeping Hussein in the hospital for a few more weeks.

“It’s a miracle from God, and I give the big thumbs to God,” Zalia said. “The challenge that he’d been through, and I see him as a blessing.”

Many students might resent online learning, but Hussein praises it.

Living in the shadow of chemo isn’t fun, made worse by eye problems that affected his vision.

“Think of sandpaper,” Hussein said, describing the dryness and blurriness. It was a struggle for him to see in the classrooms, turning just about everything to a blur.

Hussein needed to learn how to ask for help. He needed extra help. And thanks to his student government experience, he found that voice.

He gained the courage to ask for accommodations, like visual aids.

During the coronavirus pandemic, New York was in a coma, Hussein said. But his iPad was his visual aid, which allowed him to zoom in on any video and see everything — something he could never do in-person in a classroom.

With his bachelor’s degree in hand, Hussein is ready to take a short hiatus before pursuing his master’s degree. He is still debating which school to attend.

He has eyes on Baruch College. But his mom, Zalia, is looking even deeper.

“I don’t mind seeing him in the future becoming the next president,”she said.