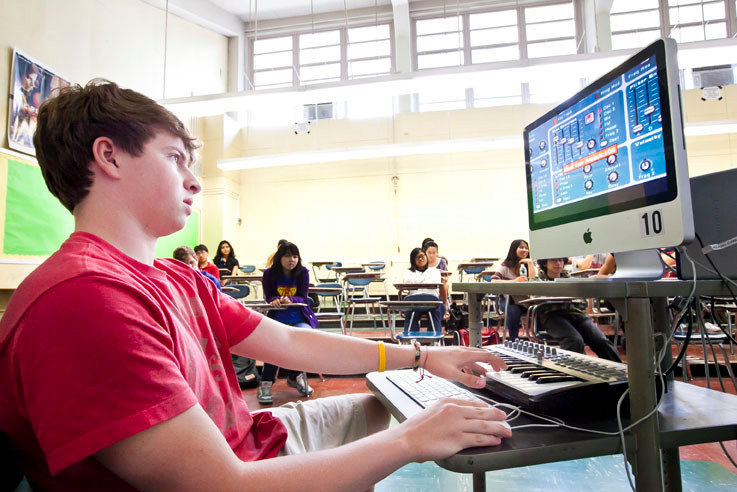 Tyler Morris from Bronx High School of Science demonstrates some uses of the synthesizer in his digital music class on May 23.
MARISOL DÍAZ/THE RIVERDALE PRESS
By Sarina Trangle

The high-pitched electronic melodies often heard pulsing through dance clubs came home to the halls of Bronx Science on May 23.

In honor of what would’ve been Robert Moog’s 78th birthday, the Bronx High School of Science started its day with a tribute to the 1952 alumnus who began pioneering the synthesizer in high school. The school’s speakers pumped out one of Wendy Carlos’ synthesized renditions of a Bach classical piano piece during the morning announcement.

It was followed by a brief explanation of how Mr. Moog helped popularize the electronic instrument, students said.

All day, music and physics classes focused on the electronic instrument. Advanced placement physics students tweaked tones on digital synthesizers, putting a finger on the sound wave frequencies they’d just studied. The next period, digital music students outlined the science behind the switchboard-like instrument they had been using to compose music on computers.

Music teacher Paul DeSilva didn’t have to tell many of his digital music students about the influence synthesizers have had on “everything from progressive rock to Michael Jackson.” Instead, his class delved into the anatomy behind the synthesizer that produces the “warm sound so many artists seek.”

Che Johnson, a senior, reviewed how fiddling with the two oscillators that produce the initial sound waves can change the music. He turned the dials on the computer up and down to “modulate” or alter how fast the sound wave moves, thus changing the pitch. By setting one oscillator slightly out of tune with the other, Che, 17, unleashed “a fat sound.”

Tyler Morris, a senior, explained how “filters determines how much of the original sound is going to be let through.” He toyed with the frequency filter knob, which eliminates different sound waves based on its setting.

Tyler, 17, then turned the resonance filter, accentuating the notes closest to the ones being blocked out.

“When you sweep the filter up and down the frequency, you get a much more poignant effect,” Mr. DeSilva said of the chords Tyler produced.