Taking a stand for mental health on MLK Day 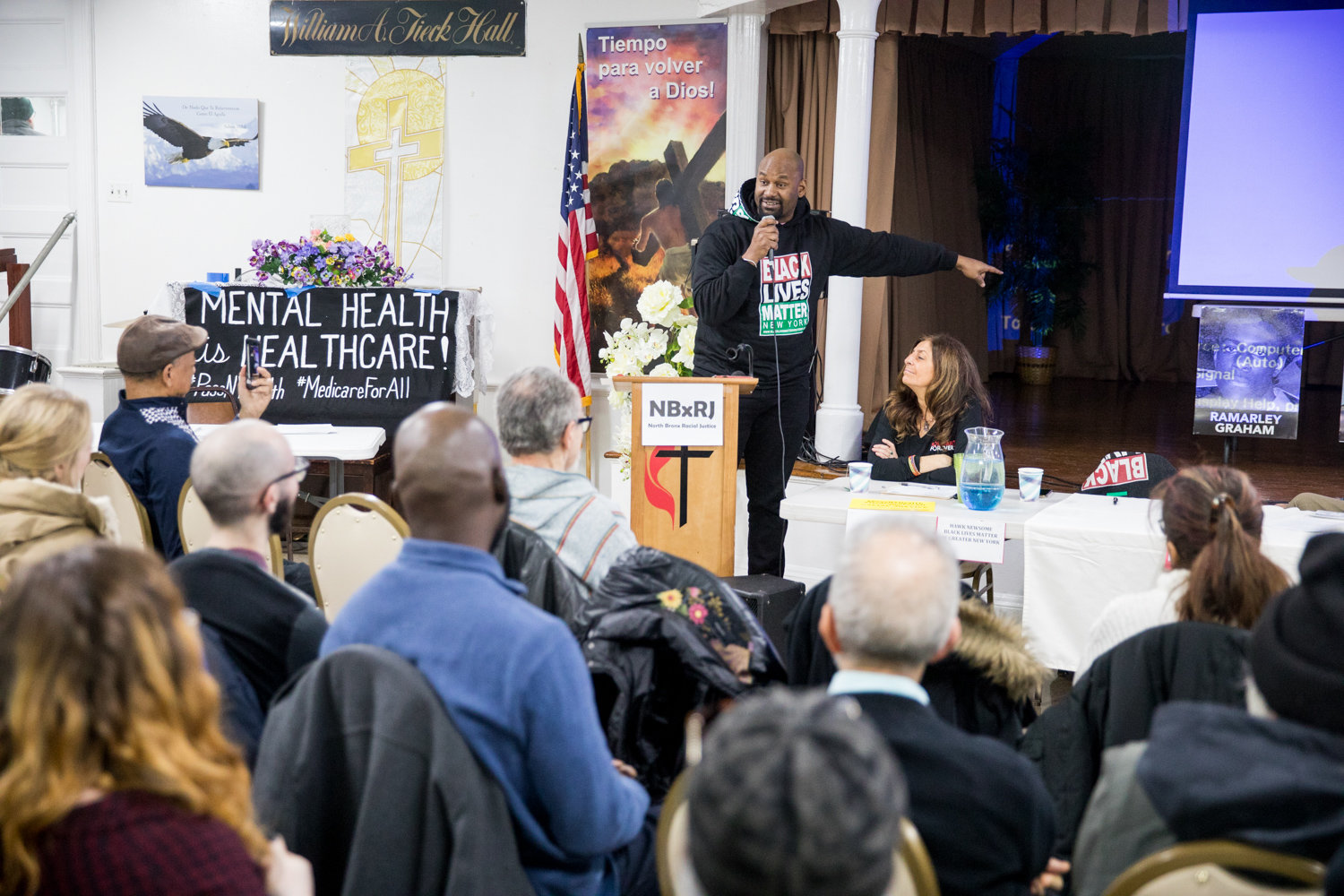 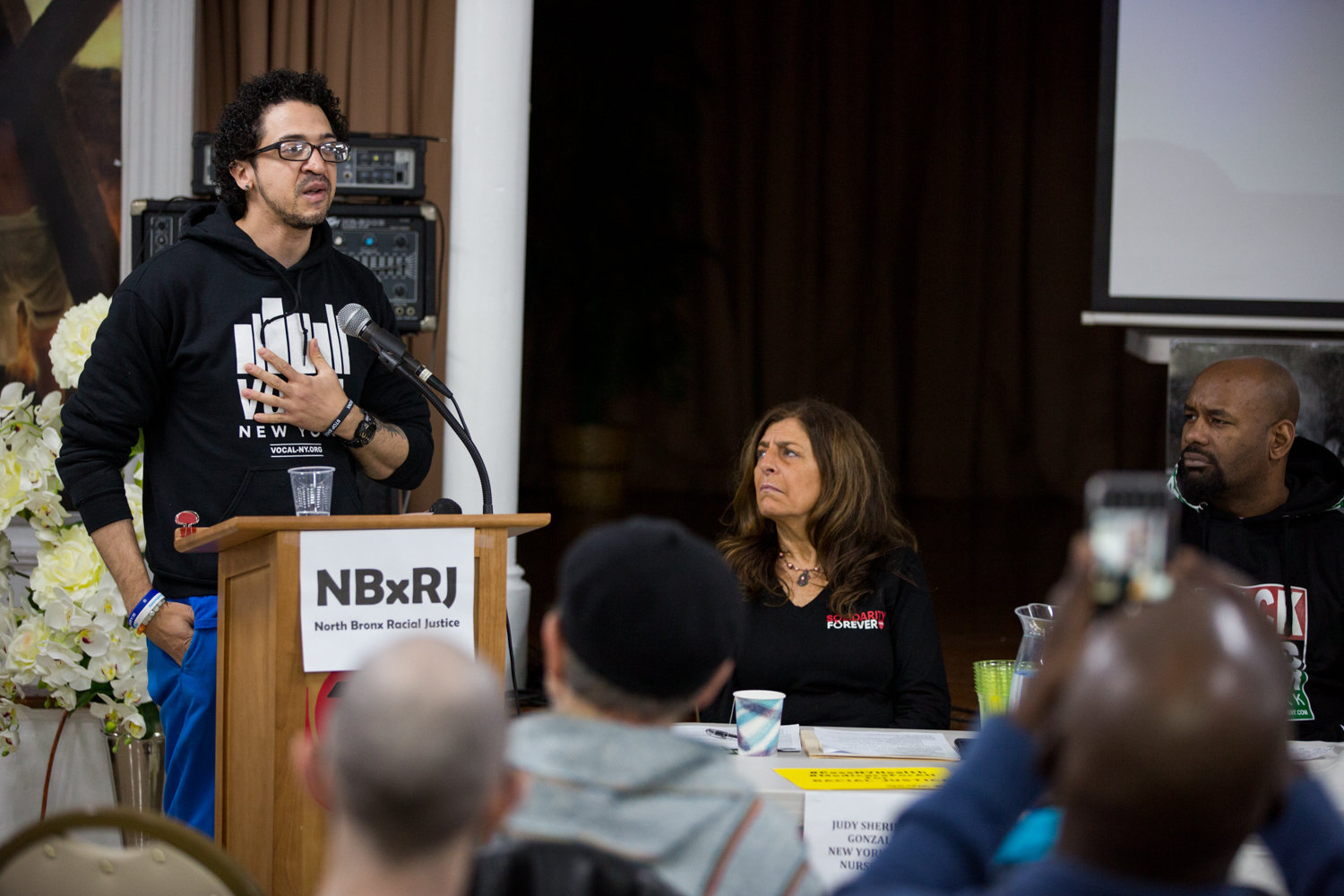 VOCAL-NY member Felix Guzman talks about his experience as a formerly incarcerated on Rikers Island and how that has shaped his view on the need form reform in how mental health is treated.
JULIUS CONSTANTINE MOTAL 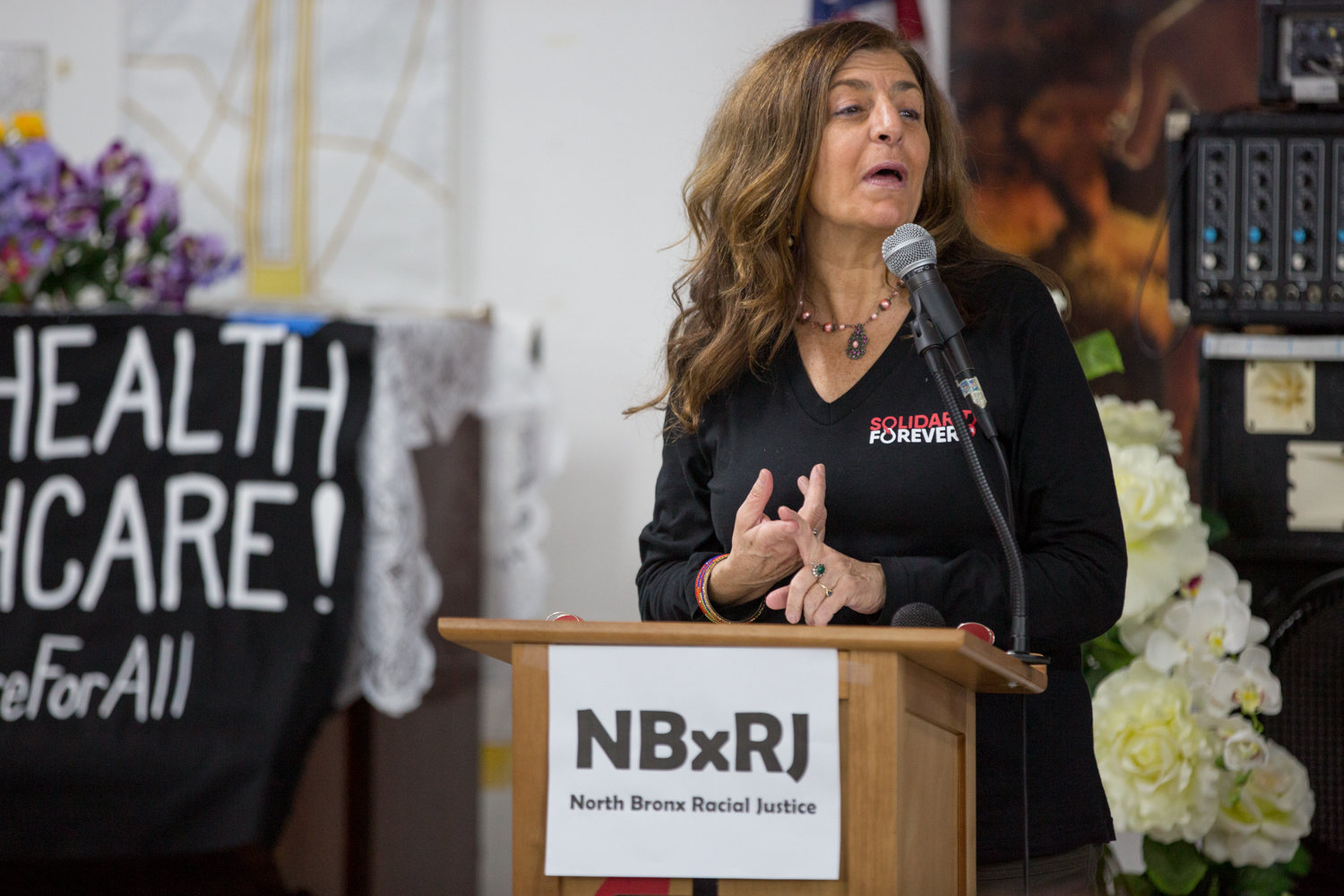 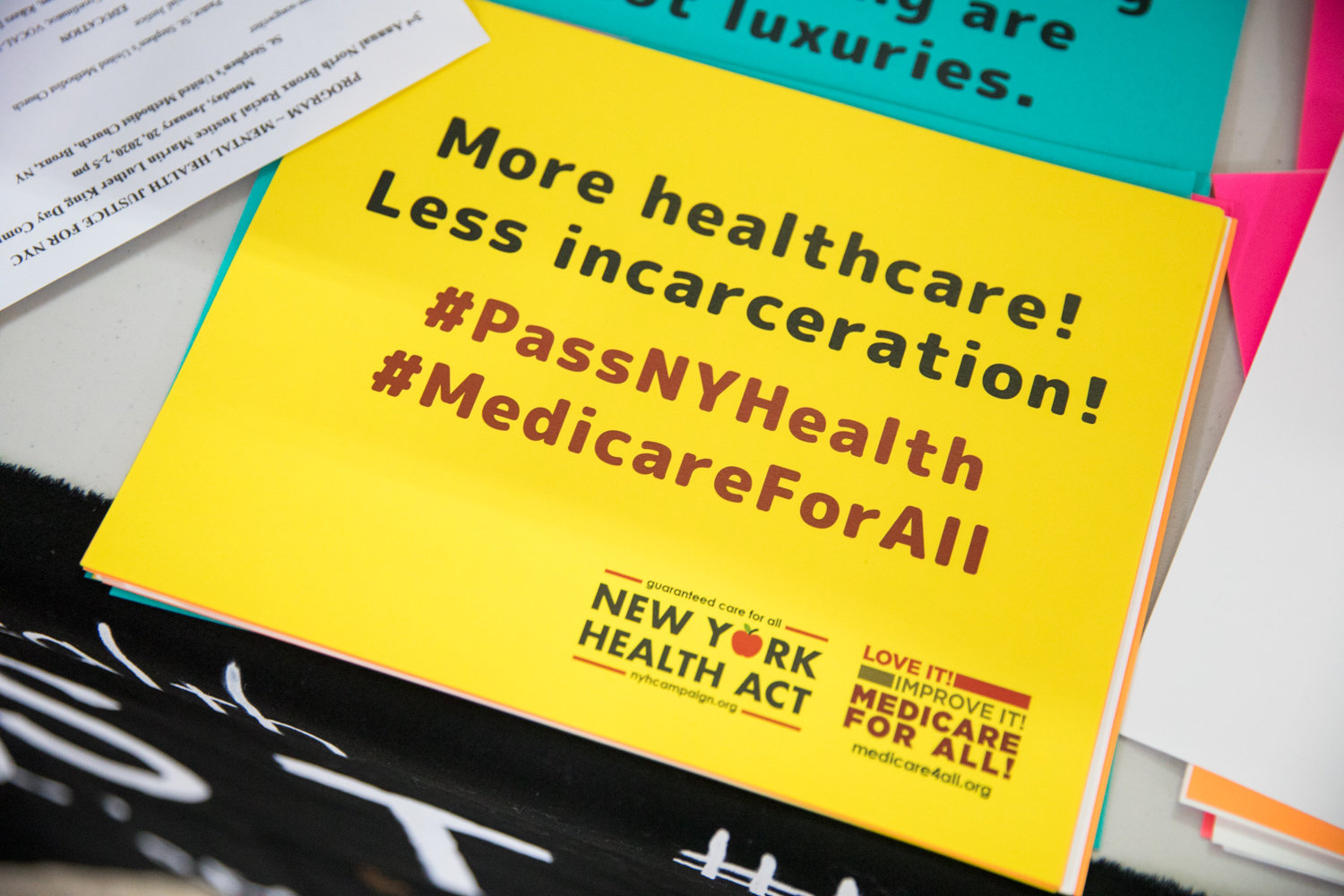 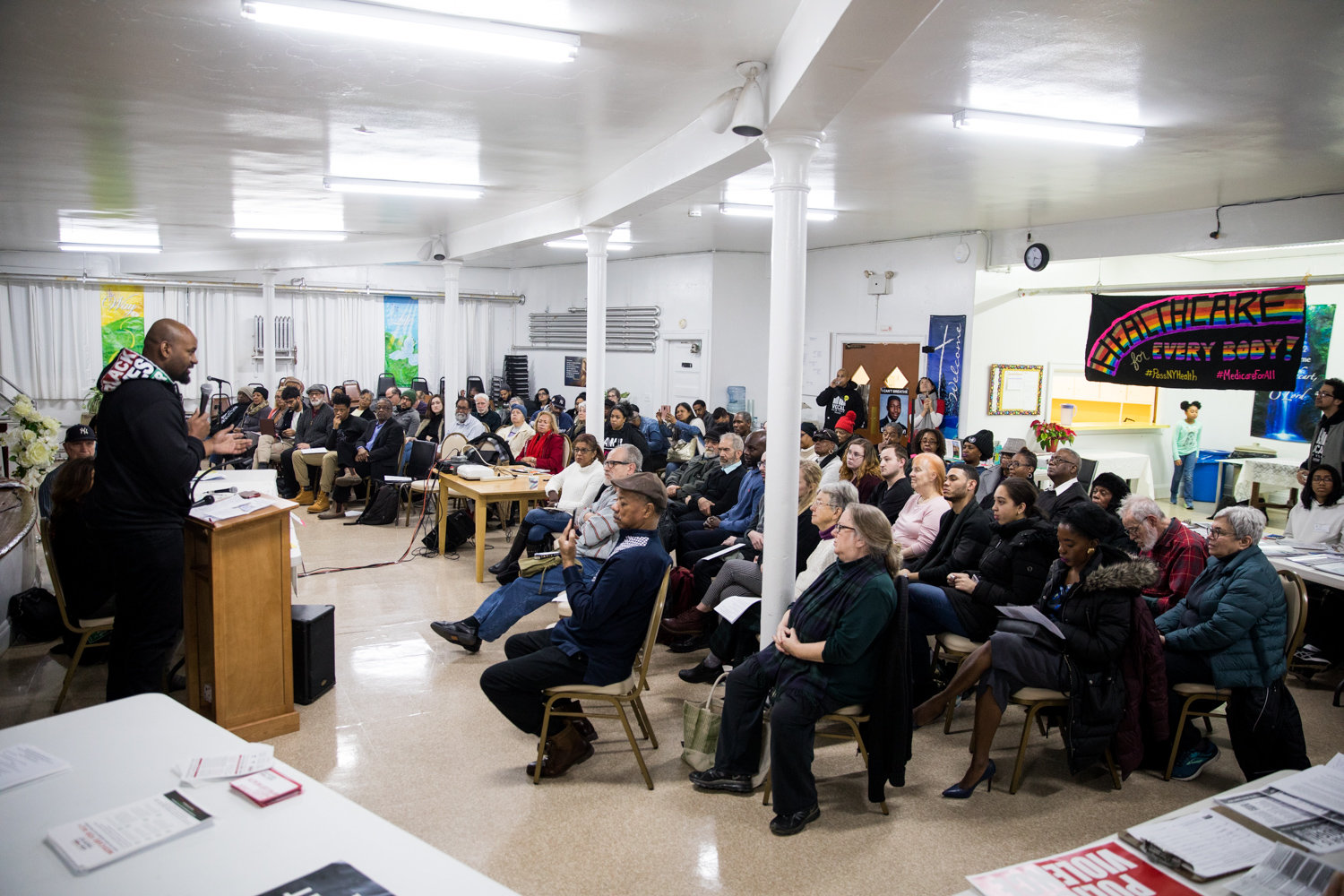 It was the federal holiday set aside to honor civil rights activist Dr. Martin Luther King Jr. But Hawk Newsome isn’t too fond of how this beacon of hope is remembered.

Newsome was part of North Bronx Racial Justice’s third annual Martin Luther King Jr. Day conversation, designed to expand dialogue past simply memorializing King. This year, the conversation was focused on making King’s legacy an active one with a close eye on police reform, mental health, and the ways the two intersect in communities of color.

Because of that deadly learning curve, communities across the country have taken policing and mental health response into their own hands — efforts that are now spreading to New York City.

Inside St. Stephen’s United Methodist Church on West 228th Street, posters were hung remembering Eric Garner, Ramarley Graham and Saheed Vassell — people who died at the hands of police. Between the walls, community organizers advocating for police reform and improving both mental and general health care, hashed out how to change the system.

“We’ve been realizing in all our individual communities that this needs to stop,” said Solomon Acevedo, court watch coordinator at VOCAL-NY, a grassroots group serving low-income people. “Now that there’s been recommendations from the public advocate’s office on alternatives, we’re trying to push for those things so they can actually being implemented.”

That report suggests sending non-police emergency responders to help deal with people suffering from mental health issues in the city instead of law enforcement. Those responders would all be trained in mental health crisis situations.

“In Eugene, Oregon, there’s one called CAHOOTS,” Acevedo said. “And they do not respond with police officers, they arrive with social workers, health care providers, who are trained in de-escalation specifically.”

CAHOOTS, or Crisis Assistance Helping Out on the Streets, dispatches a medical and crisis worker to each call, dealing with immediate crises before helping to make decisions on what next steps should be. That usually means connections to counseling, housing assistance, substance abuse clinics, and general health services.

Vassell was shot in Brooklyn in 2018 by police responding to 911 calls that he was walking the streets holding a metal pipe that looked like a gun. Vassell reportedly suffered from mental illness, which many in the community said was widely known, even to the New York Police Department.

Following Vassell’s death, a task force was convened to study conditions and develop citywide recommendations to prevent a shooting like this to happen again. But nothing has been released.

Felix Guzman, a member of Voices of Community Activists & Leaders-New York, formerly incarcerated himself, said that mental health services in public hospitals and the prison system only exacerbate the problem. He says it “lacks humanity, dignity, and also compassion for the poor.”

“It has been my experience that it wasn’t until I went to a private hospital that I got treated with compassion, and also had access to recourses in there,” Guzman said.

The poor and homeless often don’t have access to mental health services until the situation is dire, and are often not able to make an informed choice — or any choice — on what treatment they receive or where they receive it. Guzman, who says he was misdiagnosed as a result of improper medication, advocates against forced hospitalization.

“The way that poor communities are affected by mental health is a lot different from people who are able to choose a psychiatrist, or choose where to go to,” Guzman said.

Preventing people from reaching the point of crisis is key in preventing tragedy. Black Lives Matter is advocating for Medicare for All and universal basic income, Newsome said, which would level the playing field for those seeking help.

Not being able to access treatment is coupled with a drop in available treatment.

In-patient treatment options have shuttered all over the city as funding has decreased. That means patients who could benefit are left struggling with inadequate treatment, said Judy Sheridan-Gonzalez, president of the New York State Nurses Association.

Groups in the Bronx and northern Manhattan have battled against the threatened closure of Allen Hospital’s psychiatric unit, which would leave the area without any local in-patient psychiatric assistance.

The morning of the event, Newsome said he met with some of the black men in the neighborhood.

“We’re putting together community patrols to make sure our people are safe, to combat human trafficking, and just to keep our neighborhoods peaceful,” Newsome said. “I feel like the police are not a necessary presence in our communities. We should be policing ourselves.”

Just reforming the police isn’t enough, Newsome said. Without officers standing up and refusing to work with their colleagues who have committed crimes and been pardoned, the system has to be totally restarted.

“It needs to be reconstructed,” Newsome said. “Policing as it exists today can no longer exist. It has to be torn down and reconstructed. ‘Reform’ is too gentle of a word.”

It all comes down to a community taking ownership of the health and safety of its own people, Acevedo said.

“On the wider scale, as New Yorkers, we need to be having more ownership of what public safety means,” the VOCAL-NY coordinator said. “And creating a conversation about investing in the community’s group problems that actually lead to these encounters happening.”