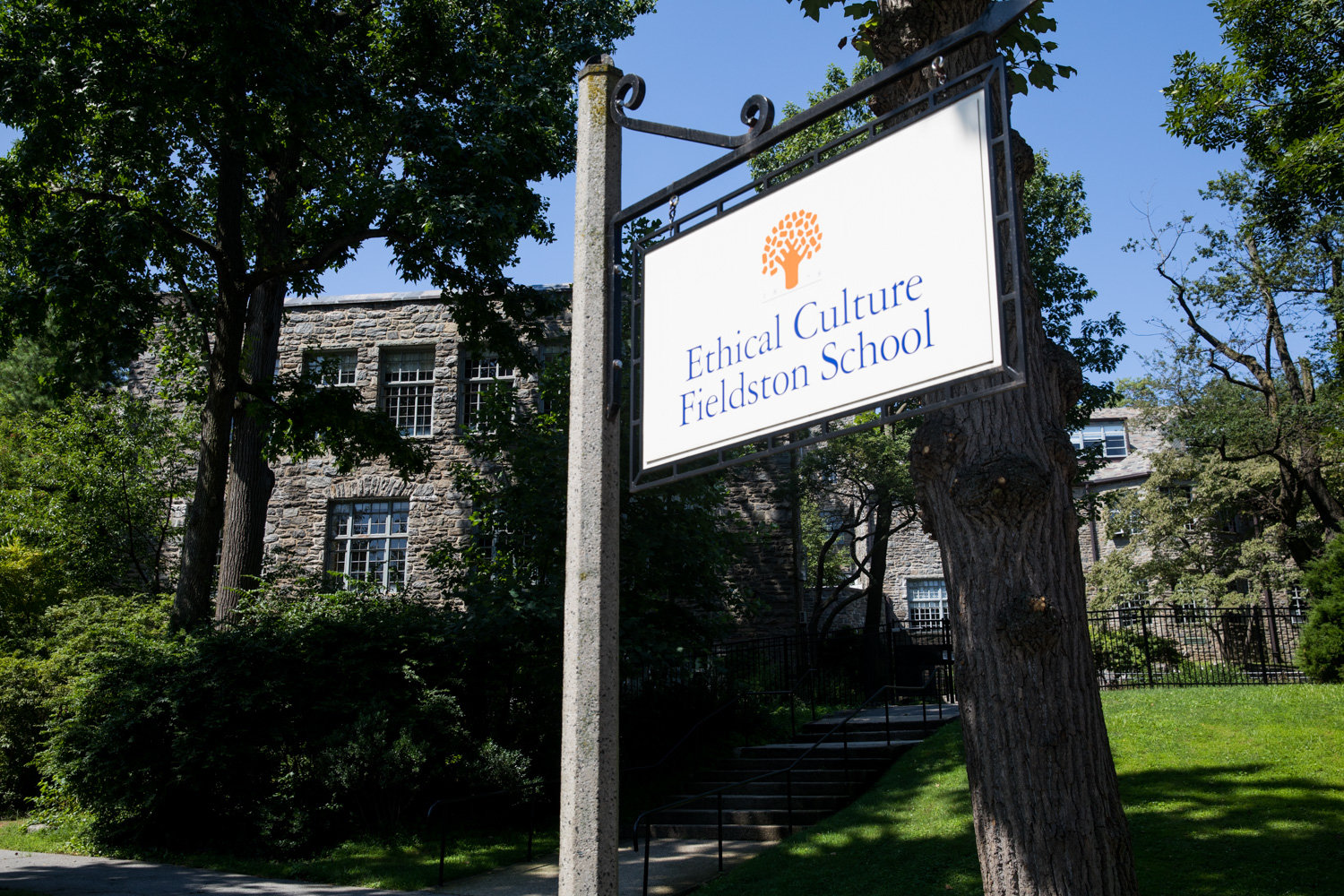 A teacher at Ethical Culture Fieldston School was fired last week after tweeting in support of recent speaker A. Kayum Ahmed, who made comments at the school late last year that some described as anti-Semitic.
JULIUS CONSTANTINE MOTAL / File 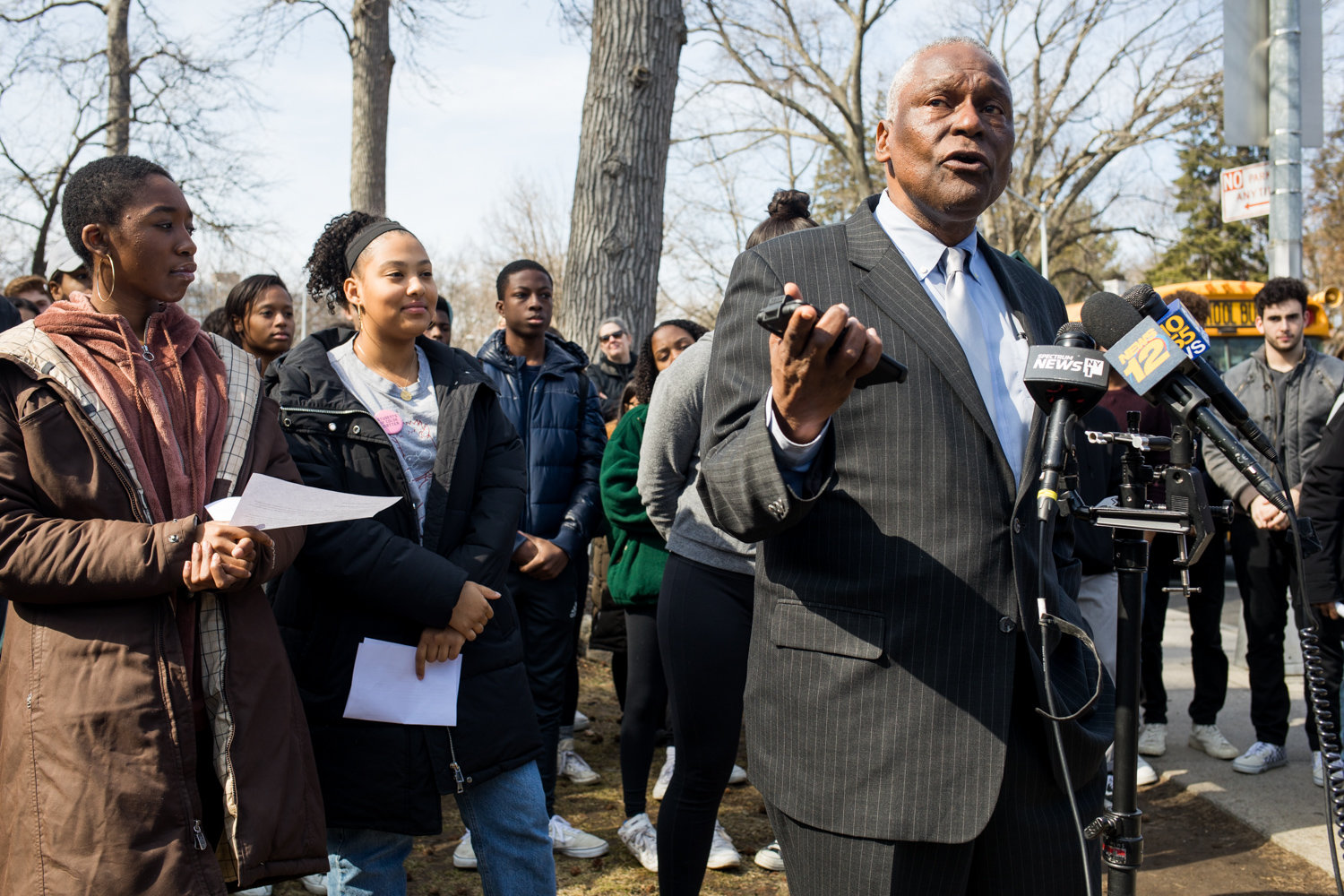 Keith Wright, an Ethical Culture Fieldston School alum, speaks at a news conference last year about the administration’s commitment to tackle robust reforms addressing what some students described as deep-seated racial issues. The school is embroiled in controversy once again after it fired a history teacher accused of making controversial remarks on social media.
JULIUS CONSTANTINE MOTAL / File 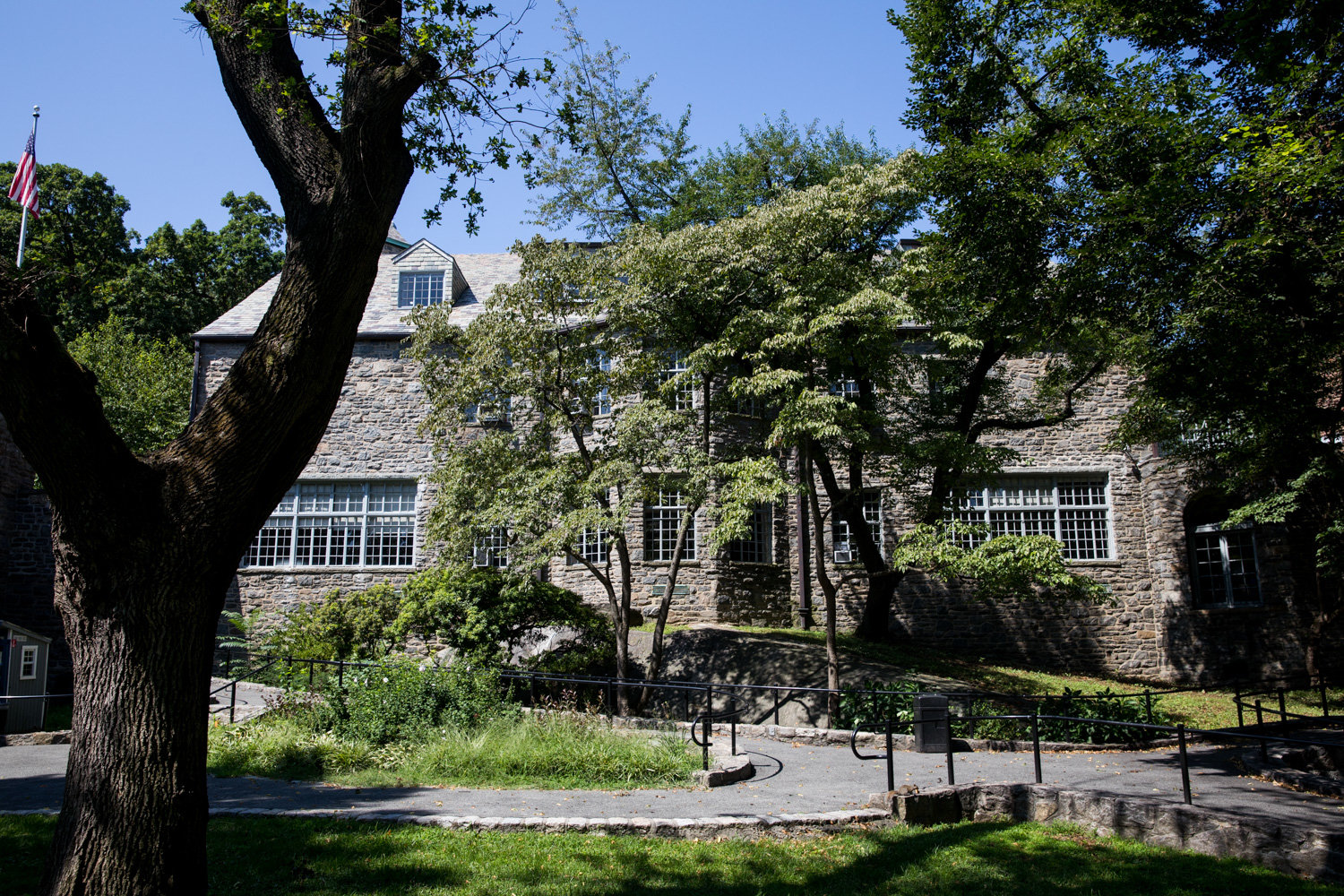 A year after perceived racial issues prompted a sit-in, Ethical Culture Fieldston School has found itself in the middle of another controversy after a guest speaker at the school made remarks some claim are anti-Semitic. The school subsequently fired history teacher J.B. Brager, after they responded on social media with comments some have labeled as anti-Israel.
JULIUS CONSTANTINE MOTAL / File 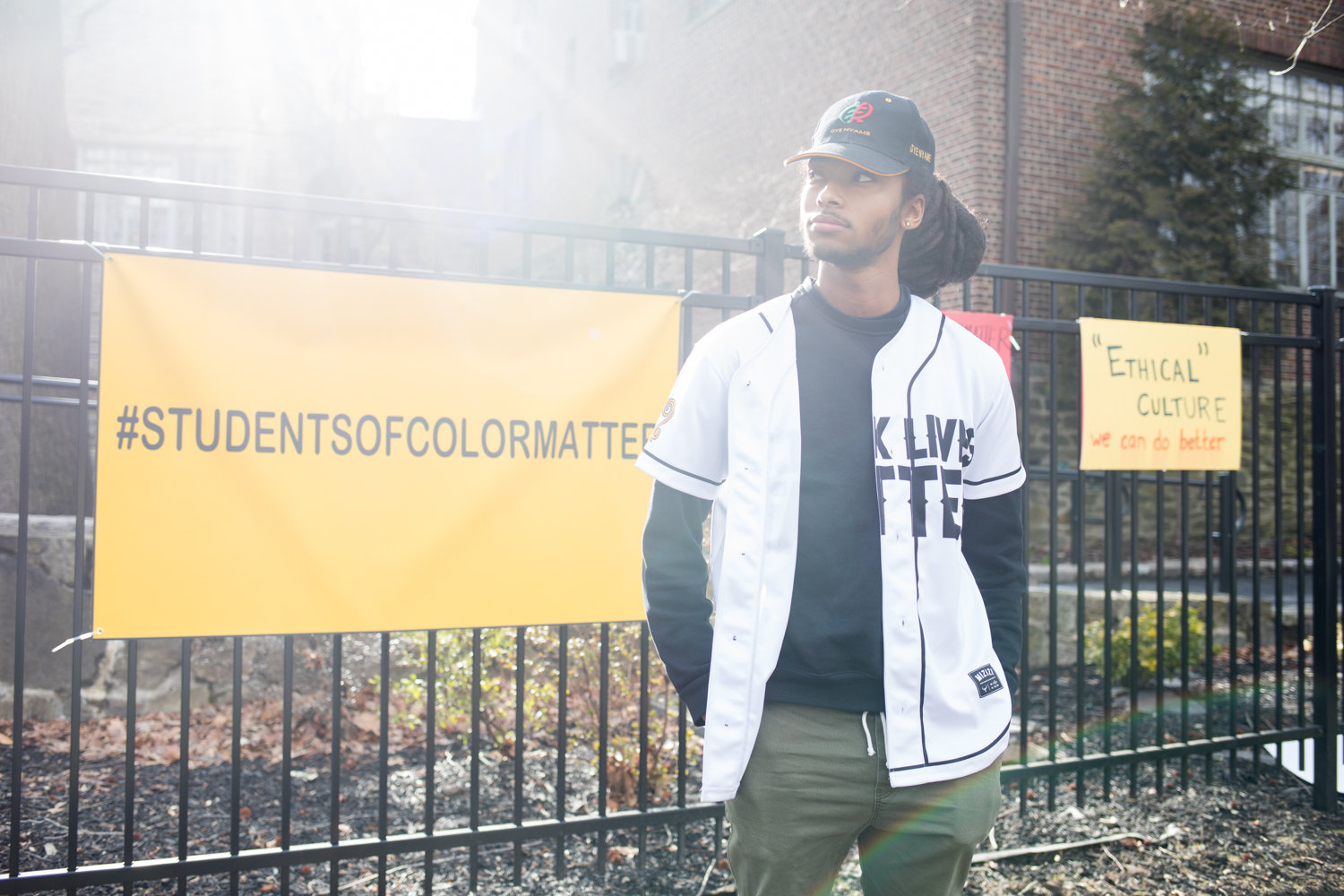 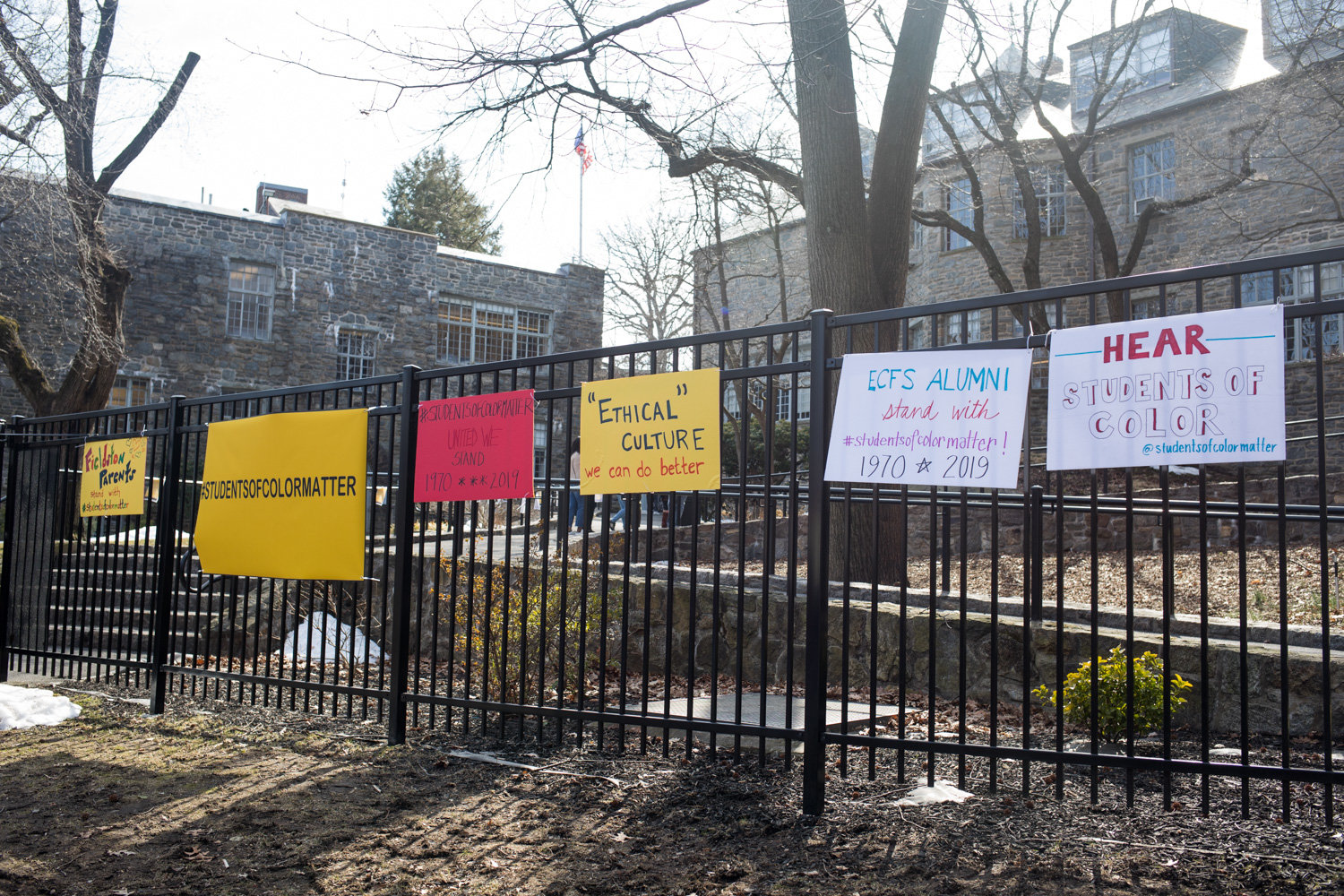 Signs expressing solidarity with the Students of Color Matter organization adorn a fence last year outside Ethical Culture Fieldston School. In the wake of a lawsuit over alleged systemic racism. Nearly a year later, the school is in the middle of another controversy following an outcry over a guest speaker’s alleged anti-Semitic remarks. The school subsequently fired history teacher J.B. Brager, reportedly over social media posts in relation to that controversy.
JULIUS CONSTANTINE MOTAL / File
Previous Next
By KIRSTYN BRENDLEN

An Ethical Culture Fieldston School teacher was fired last week after reportedly being accused of inappropriate social media posts in the wake of a controversial guest speaker at the school.

J.B. Brager, a history teacher at the school, confirmed they had been let go after just 18 months on the job, but declined to provide further comment. They don’t have to speak, however, because hundreds of Fieldston alumni, parents and community leaders have signed onto a letter demanding Brager be reinstated, citing the teacher’s right to share their opinion — even an unpopular one. (Brager uses the "they/them" pronouns.)

The trouble for Brager began in November when Fieldston hosted A. Kayum Ahmed, a lecturer at Columbia Law School and division director at the Open Society Foundations. In a video posted by conservative blog Washington Free Beacon, Ahmed answered a question from a Fieldston student by describing apartheid in South Africa as an example of the “fluidity of victims becoming perpetrators.”

That exchange created ire among some news outlets and bloggers, but apparently also triggered a response by Brager, who posted at least three times on Twitter over that limited media coverage of Ahmed’s presentation.

“When institutions of ‘learning’ bow to political pressure to disavow historical reality, what can educators do within that institution?” wrote Brager, who identifies as Jewish, on Twitter

“I support BDS (boycotts, divestments, sanctions) and Palestinian sovereignty, and I have for my entire life,” they continued, citing the BDS movement, which seeks to pressure Israel to leave its occupied territories and grant full rights to Palestinians, among a host of other demands. The movement has been accused of being anti-Semitic.

“I refuse to reaffirm the value of ethnonationalist settler colonialism,” Brager wrote.

Fieldston administrators told The Riverdale Press it does not comment on personnel matters, but did follow up with a statement claiming “the school does not tolerate hurtful, offensive or exclusionary content or comment from any member of the community. Students, parents, employees and other members of our community all face consequences for misbehavior of this nature.”

“We would like to understand how such a speaker could be invited to address ECFS students, what steps the school has taken to hold those responsible accountable, how the school has communicated to students and parents that such rhetoric is unacceptable,” the two wrote in a letter to the school. They also wanted Fieldston administrators to share how they planned to “prevent future incidents.”

Following Brager’s termination, Fieldston trustees were sent their own letter Friday stating that “voices from inside the school have made it clear that the administration fired J.B. in response to pressure from a small set of conservative parents, who in turn were supported by smear attacks on J.B. in the right wing press. Those attacks focused on J.B.’s gender expression and personal investment in human rights struggles.”

A resume on Brager’s website says they have taught at Fieldston since Summer 2018, with a focus on history and seventh-grade sex education. They also are a faculty advisor to Fieldston’s Queer Straight Alliance Club and the trans student Affinity group.

Rabbi Alissa Wise, deputy director at Jewish Voice for Peace, said that accusations of anti-Semitism used to be reserved only for non-Jewish people. In recent years, she said, it’s become more common for Jewish people who support Palestine to be accused of anti-Semitism.

“The main tactic that is used against the thriving and global movement of solidarity with Palestinians is this charge of anti-Semitism,” Wise said. “Even as Jews, who are now not immune to these charges.”

The letter calls on the school to reinstate Brager, and for the school to “engage in reflection on racism, anti-Semitism and an ethics of power that centers the experiences of those without it.”

The letter is signed by more than 650 Fieldston alumni, northwest Bronx community leaders, alumni parents, and members of queer and Jewish communities as well as communities of color.

Among the signers is Nancy Kricorian, an author and mother of two Fieldston alumni, the last who graduated in 2014. During her daughter’s time at the private school, Kricorian invited two Jewish Israelis who some labeled as anti-Zionists to speak at the school with no major backlash.

“Right now there is a growing cohort of young Jewish students who are involved with organizations such as Jewish Voice for Peace and If Not Now,” Kricorian said. “They are leftist and or progressive, and their values include a commitment to equality and justice for Palestinians. They are often the target of these coordinated attacks that take the form of what we’re seeing at Fieldston and other forms, such as legal attacks on people’s right to free speech.”

It’s not the first controversy involving minority groups at Fieldston. In 2017, George Burns, the principal of the lower school, quit after claiming head of school Jessica Bagby made anti-Semitic comments — claims Bagby, at the time, denied. And just last year, a group calling itself Students of Color Matter took over an administration building at the school in protest after a video surfaced of Fieldston students allegedly making racial slurs.

Brager, in fact, helped the administration weather that storm last year, according to the letter sent from the alumni and community leaders. Brager lead the effort to redraft curriculum in the history department to help make it more inclusive of different races.

The controversy has reignited an ongoing debate over the distinction between criticism over policies instituted by the Israeli government and anti-Semitism.

“When you encounter anti-Israel protests, ask the protesters what they are protesting,” Hirsch told to students, according to a release from the synagogue. “And if they tell you they are against Zionism — that Zionism is racism — ask them how they see the solution to the Israeli-Palestinian conflict, and listen carefully to their response. They want not accommodation with Israel, but the elimination of Israel.”

Kricorian, however, finds accusations of anti-Semitism are nothing more than a weapon used to silence any criticism of Israel policies.

“Fieldston’s administration is afraid — as are many school administrations — of being accused of anti-Semitism,” she said. “There are real and terrifying acts of hatred and violence being perpetrated against Jewish people, but a Jewish teacher’s anti-Zionist opinions and social media posts are not anti-Semitism.”

But one cannot separate Judaism and Israel, said Cindy Grosz, a Jewish activist and writer.

“Israel is historically, religiously, emotionally and legally the land of the Jewish people,” she said. “And anybody who wants to talk about boycotting Israel … it’s just a way of saying that they are anti-Semitic.”

Rabbi Wise described Brager’s firing as part of a larger issue: That of the First Amendment.

“What alarmed me was that it fit perfectly into a pattern with what we’ve been seeing, honestly, in higher education,” she said, “but more broadly the repression of — and silencing of — critics of Israel.”