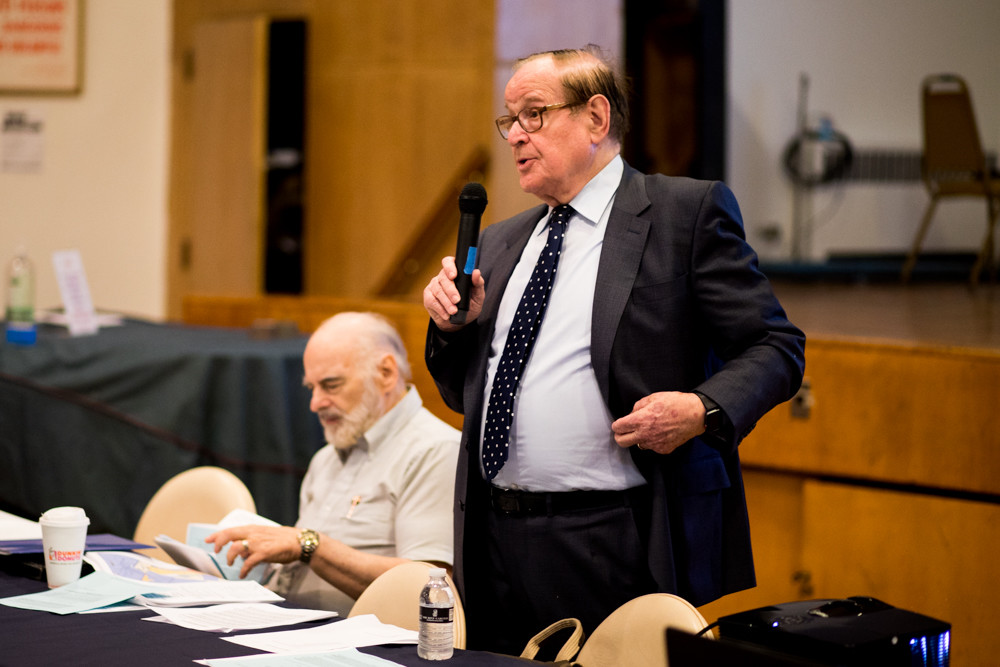 Community Board 8 land use committee chair Charles Moerdler gives opening remarks at a meeting and public comment session at the Riverdale Temple on June 7. Moerdler has served as land use chair for more than 30 years, but that could soon change with an effort from Mayor Bill de Blasio’s charter revision commission to impose eight-year term limits on community board members.
JULIUS CONSTANTINE MOTAL / File
City lawyers silence boards on referendum

A single referendum item on the November ballot could drastically change community boards — but the boards themselves won’t be able to say anything about it.

At least as a collective board.

Stephen Louis, the city’s law department chief, has circulated a memo to community boards telling them that if they have any thoughts on term limits for community board members, they need to keep it to themselves.

Louis nor the mayor’s office returned a request for comment, but the legal chief cited the state’s constitution which prohibits the “gift of public funds.”

Some members of Community Board 8 have already come out against the proposed limits, which would cap a member’s time at eight years. They can then re-apply after a two-year rest. The commission says the move will help create more diversity on boards that have some members spanning decades, but others — including four of the five borough presidents, like Ruben Diaz Jr. — say it will only open the door to more over-development, since seasoned members will be forced out.

While the constitution prohibits a community board from speaking as a whole, it does not stop them from speaking out individually, Louis said.

“Community board members or employees should make it clear that they are acting in their personal capacity and not on behalf of the community board,” Louis said. “Community board funds or other resources may not be used in any way in connection with it.”

Voters will have a chance to express their views on this and other proposed revisions to the city charter Nov. 6.

It could be a crippling blow to community board clout. At least that’s what four of New York City’s five borough presidents are claiming.

The main issue? Land use committees, like the one at Community Board 8, chaired by Charles Moerdler. And in the borough presidents’ view, the most important function of community boards.

The proposal, from Mayor Bill de Blasio’s charter revision commission, calls for setting a limit of four consecutive two-year terms for community board members, to become effective for appointments beginning on or after April 1 next year. Board members would be allowed to reapply to the board after a two-year break.

“The changes proposed to the community boards represent the public’s desire for these boards to be a reflection of their community,” said Jose Bayona, director of community and ethnic media for the mayor’s office, “and to be more accountable to the people they represent.”

But the borough presidents foresee grave ramifications, claiming community board members serving on land use committees must develop expertise that typically comes from years of experience serving on the board.

“To impose term limits on these members serves only to further empower real estate developers and the lobbyists and technical advisors who appear on their behalf before the community boards,” the borough presidents wrote in a letter to the commission.

Moerdler, who has chaired CB8’s land use committee for three decades, agrees. He fears the proposal could have a deleterious effect on democracy at the grassroots level.

The borough presidents also voiced concern over a proposal to create a civic engagement commission to provide technical help — including in urban planning — to community boards, arguing it’s already the borough president’s job to do that. It’s this item Moerdler, in particular, is most worried about.

“If we’re going to have any form of decentralized government, any form of community participation, it is at the grass root,” Moerdler said. “The borough presidents are both the planners for, and the representatives of, each of the boroughs. And the council members are, at least in theory, supposed to represent the views of the local constituency.”

In fact, Moerdler says, recent history offers a lesson. He traces what he describes as today’s city-versus-community clash all the way back to mayors Edward Koch and John Lindsay he says actually were in favor of decentralizing government.

Community boards were originally called community planning boards, Moerdler said, created under a city charter reform to plan their respective areas, transmitting their reports to the city planning commission, and giving them acutely local insight. They even played a role formulating the capital budget.

“Over the years, administrations following those of Koch and Lindsay started to take those powers away and to centralize government, essentially saying to the communities, ‘Go to hell,’” Moerdler said. “The apex of that effort at centralization and at ignoring community input has been in this de Blasio administration.”

Which, as Moerdler sees it, is a move in the wrong direction.

“All government, and all politics, should be local,” Moerdler said. “The people in the communities have something to say about their lives and their role.”

CB8 chair Rosemary Ginty joined Moerdler in cautioning against what she sees as “clear” and “obvious” consequences from limiting terms — losing “the experience and historical perspective on the community and issues facing the community.”

And the effects could reverberate beyond land use, Ginty said, affecting board members’ ability “to understand the history behind virtually every issue that our committees deal with — whether it’s parks or traffic and transportation, education, aging. To lose that historical perspective in those areas, I don’t believe is particularly helpful.”

While Ginty lauds any effort to make community boards more diverse and responsive to the neighborhoods they serve, she’s not sure imposing term limits is the most effective way of achieving that.

But it’s not — rather, it’s for two years, with members appointed by the borough president. And, Ginty points out, a full 50 percent of those members must come from a list of nominations provided from local city council members.

It’s this biannual selection process Ginty feels provides plenty of opportunities to inject fresh blood into boards as communities morph, and to get rid of some of the dead weight.

In fact, the borough president received 325 new applications last February for the term starting in April, with 80 new members appointed borough-wide, 10 of which were appointed to CB8 — more than one fifth of its members — said communications director John DeSio. Term limits already exist, DeSio added, since no member is guaranteed reappointment to any board.

Ginty feels the commission may have pushed the proposal forward a bit too hastily. “I did not get a sense that there was a lot of community debate on these issues, or citywide debate,” she said.

But Moerdler surmises the rush was deliberate.

“It’s manipulative,” Moerdler said, “It’s not progressive. It’s the old story of opaque and kind of backroom dealing. You slip it in at the last moment and hope nobody sees.”

Voters will have a chance to decide for themselves on the proposals come November. Moerdler hopes they’ll think hard before casting their ballots, because term limits, as he sees it, could have formidable consequences.

“In my view, it is something that will go down to the great detriment of all of the City of New York,” Moerdler said. “Individuals in the community will have a far smaller voice by reason of it, and politicians will have more. It is, in a word, something that is retrogressive to its worst degree.”