Thanks to technology, some plants are no longer invisible 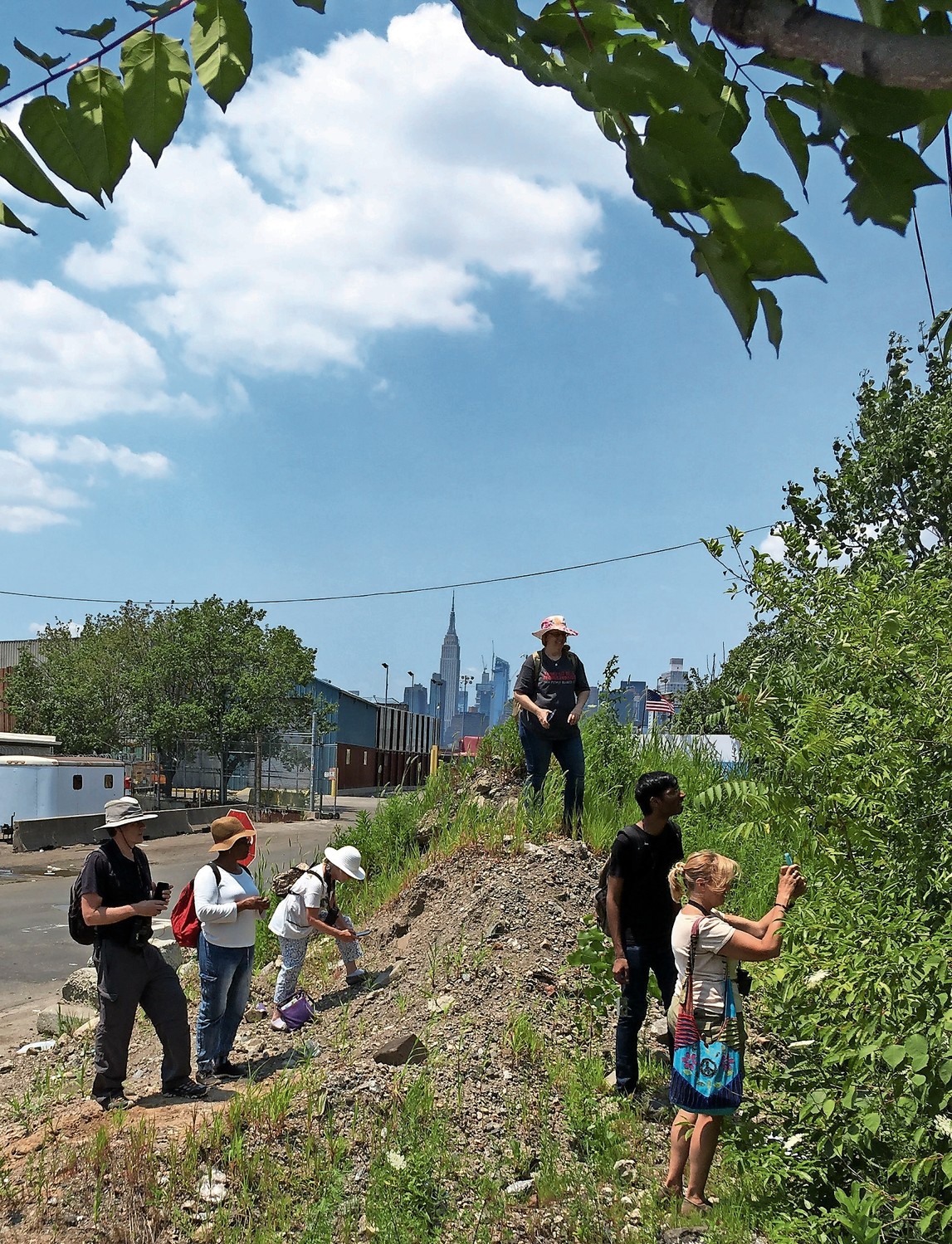 ‘Citizen-scientists’ make observations on Railroad Avenue along Newtown Creek in Queens last July. While people are quick to spot animals and such in their environment, the same can’t be said about plants — and that’s something that really needs to change.
Courtesy of New York Botanical Garden
By SURA JESELSOHN

I prefer not to schedule anything time-consuming on Fridays. Yet on Aug. 3, there I was with about 250 others, anxious to learn more about the New York Botanical Garden’s EcoFlora project.

You may remember that I wrote about this project in December 2016 when it was still in the discussion stage in its efforts to document all the flora found in the five boroughs.

This is clearly a staggering project from the logistical standpoint, yet the various presentations showed tremendous progress in just one year. Brian Boom, vice president for conservation strategy, together with Daniel Atha, the conservation outreach director, head EcoFlora. One of their happiest surprises is how enthusiastically the public has responded.

Perhaps the most intriguing new term for a layperson that was introduced at the conference is “plant blindness.” The term simply means that for the bulk of us, plants are invisible.

It was really brought home when Brian put up on the screen various silhouettes of animal figures such as those any child would encounter in a board book. Of course, we all immediately identify the elephant, the dog, the bird, even the occasional insect. But there is nothing comparable for plants, although the generic flower and tree are sometimes included.

Considering that animal life is dependent on plant life, this blindness is both odd and can have serious consequences. A fundamental purpose of EcoFlora is to educate the populace so that they can become more effective stewards of our natural environment.

One sign of the building interest in our urban environment is an urban naturalist certificate program given at the New York Botanical Garden. It is chaired by Mike Feller who spent 31 years as the chief naturalist for the city’s Natural Resource Group and spearheaded the Forever Wild Program, which established 51 nature preserves throughout the city.

Although the project has been collecting its own data for only one year, there is a massive compendium of botanical material already available online at NYBG.org. This material is a synthesis of multiple sources.

In order to have an historical background as well as additional breadth, material from herbaria around the country is being made available through software created by Symbiota.

In addition to materials already available in collections, the project harnesses the enormous potential of students and the populace at-large — otherwise known as “citizen-scientists” — creating an increasing number of eyes and ears in the community who are excited about being involved by submitting observations.

EcoFlora already had several existing models which were helpful in designing their operation. The model I found most exciting is the city nature challenge. Begun in 2016 to capitalize on the friendly rivalry between Los Angeles and San Francisco, it was a week-long contest to see which city could make the most observations of the natural environment.

In 2017, there were 16 cities around the United States — including New York City — hosting their own challenges with more than 4,000 total participants. This year it went international, with San Francisco having the most observations, and included more than 17,000 people.

The most out-of-the-way location was Palmer Station, Antarctica, with three participants.

The best app for EcoFlora is iNaturalist. Loaded onto your smartphone, it is always available to take photos of whatever you spot as you move around outdoors in your daily life.

The app includes a GPS so the information is not just tabulated, it is also specifically sited on the map. Indeed, it is how the observations from the city nature challenge are submitted.

You do not need to be able to identify your submissions in order to participate. The app will make suggestions from which you can choose, or the submission can remain unidentified until a naturalist looks over the shot.

But plants do not exist in a vacuum, and it is instructive to know what animals are present in order to build a more complete picture of the total environment. Global Biotic Interactions, or GloBi, is a website that provides species-interaction data in addition to photos to iNaturalist.

The botanical garden also engages new users by running an EcoQuest challenge using iNaturalist each month. The garden chooses a particular plant, describes it thoroughly, and asks everyone to locate and submit observations of that plant.

Winter is no deterrent to the challenges — they simply choose some plant that is observable all year long such as English ivy (Hedera helix) or lichens. To date, 730 participants have made more than 30,000 observations.

I urge you to join this effort. It’s great fun, as well as useful!