The good, the bad, the ugly of MTA 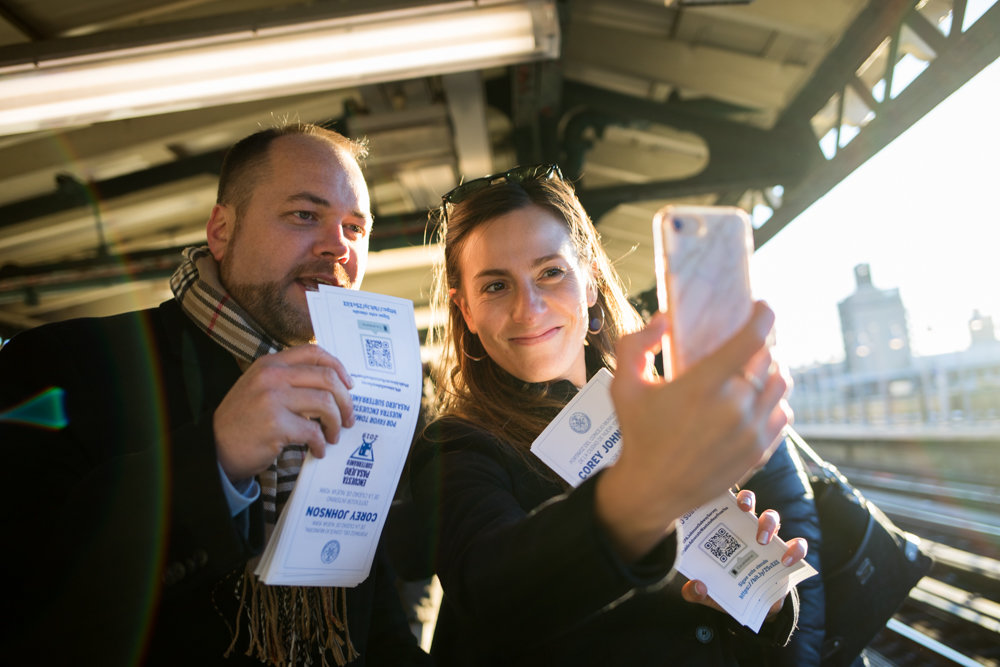 State Sen. Alessandra Biaggi records a video for her Instagram account with city council Speaker and acting public advocate Corey Johnson at the West 238th Street 1 train station during the final day of Johnson’s five-day, five-borough transit tour Jan. 11. Their aim was to gather input from riders about how their commutes could be better.
JULIUS CONSTANTINE MOTAL 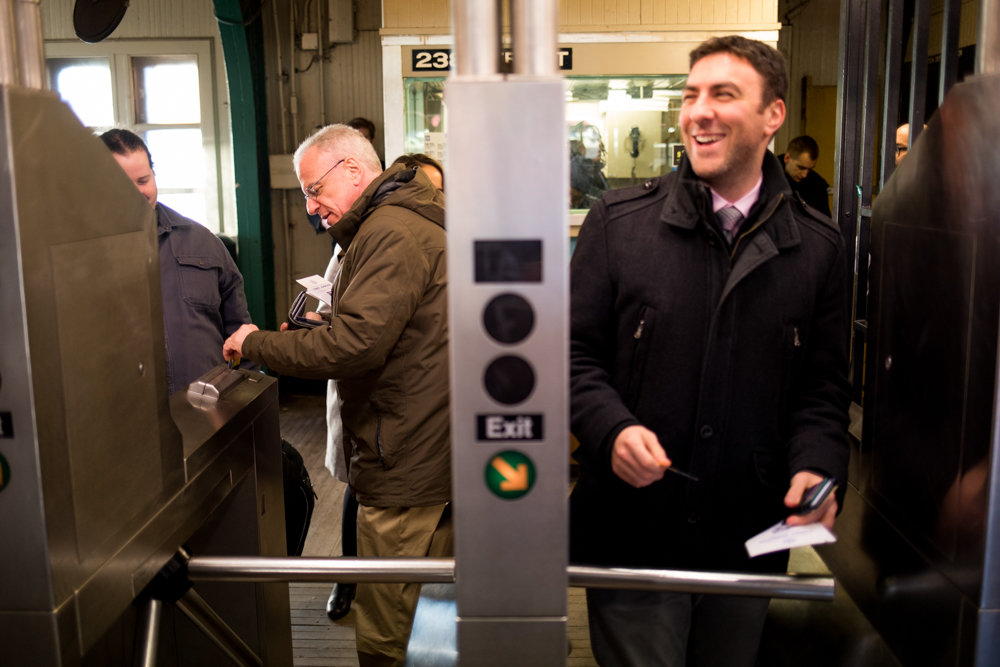 Assemblyman Jeffrey Dinowitz swipes his MetroCard at the West 238th Street 1 train station while his son — 81st Assembly Democratic district leader Eric Dinowitz — walks through the turnstile Jan. 11. The two were on hand to gather input from riders on how their commutes could improve during the final day of a week-long transit tour led by city council Speaker Corey Johnson, making stops in all five boroughs.
JULIUS CONSTANTINE MOTAL 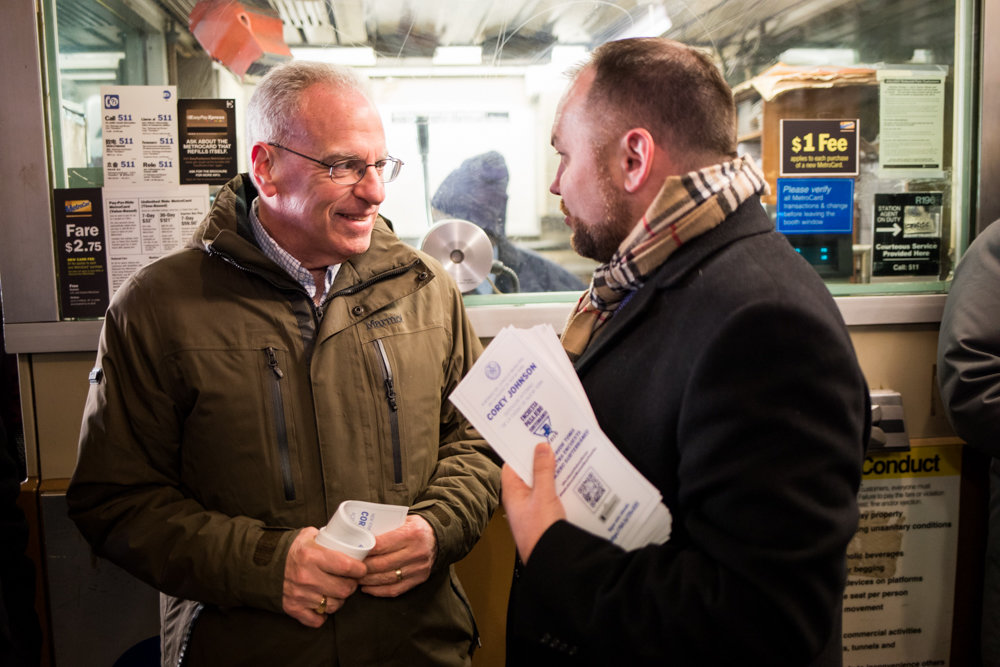 Assemblyman Jeffrey Dinowitz, left, speaks with city council Speaker and acting public advocate Corey Johnson at the West 238th Street 1 train station Jan. 11. They, along with Councilman Andrew Cohen and state Sen. Alessandra Biaggi, had joined Johnson on the final day of his five-borough transit tour to better understand how much of a nightmare commuting on the MTA can be.
JULIUS CONSTANTINE MOTAL 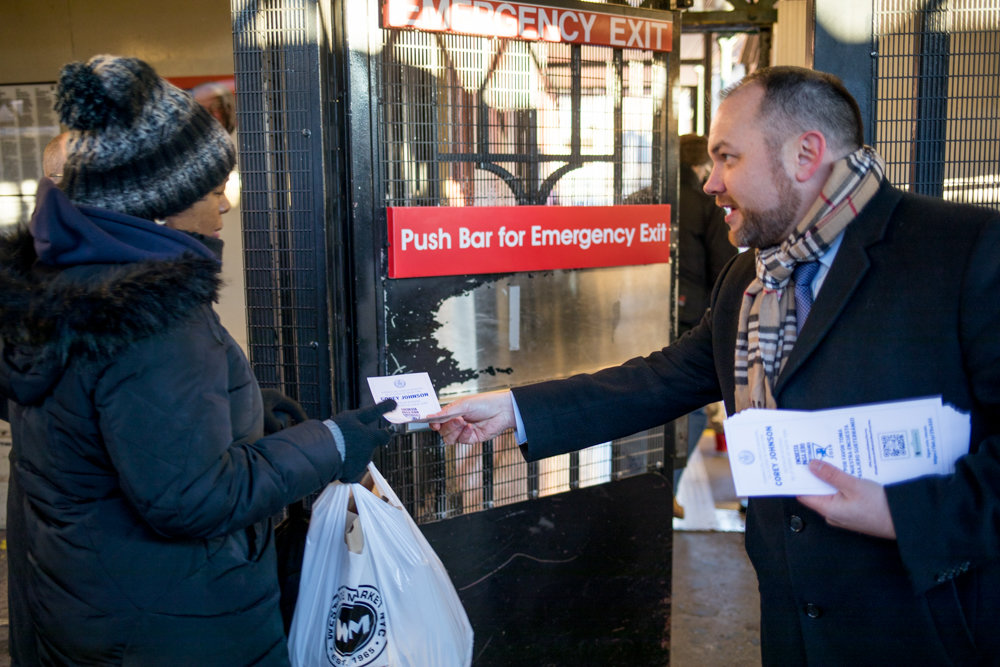 City council Speaker and acting public advocate Corey Johnson hands out a survey to a commuter leaving the uptown 1 train platform at West 238th Street on the last day of his five-borough transit tour Jan. 11. Johnson and other local elected officials led the initiative to better understand commuter plights and how they could fix them.
JULIUS CONSTANTINE MOTAL 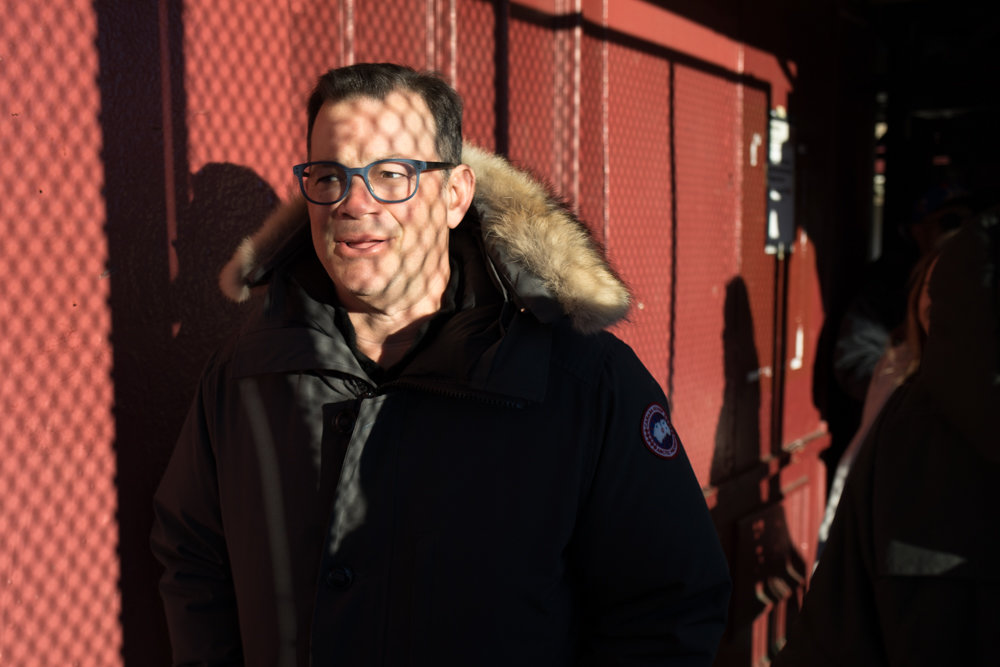 Councilman Andrew Cohen walks toward the downtown 1 train platform at West 238th Street on Jan. 11 on the final day of city council Speaker and acting public advocate Corey Johnson’s citywide transit tour, wherein he and other elected officials collected feedback from straphangers on how the MTA’s shortcomings continue to wreak havoc on their commutes.
JULIUS CONSTANTINE MOTAL 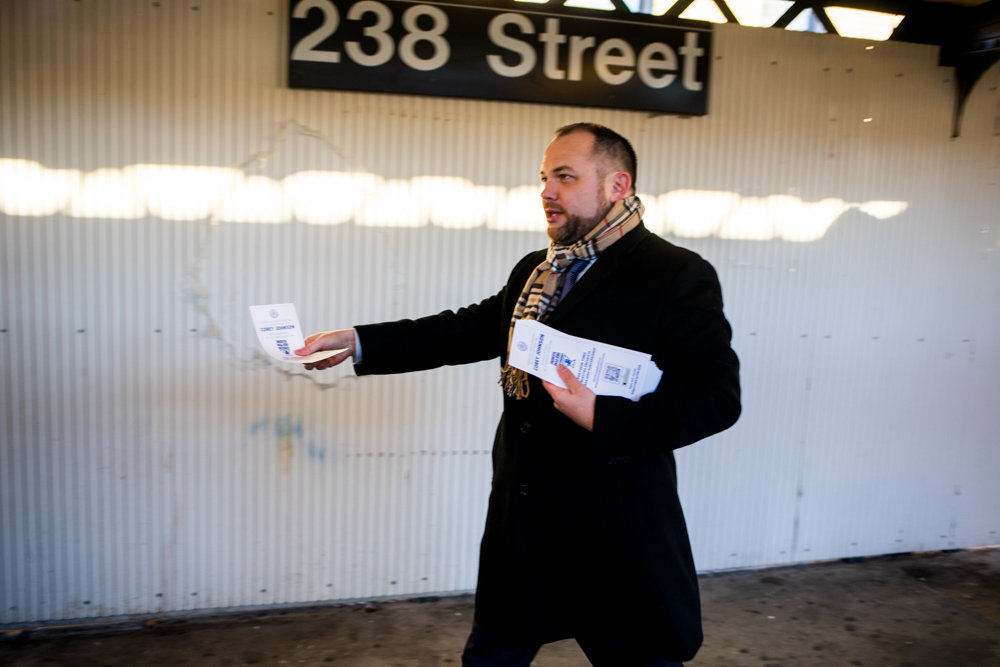 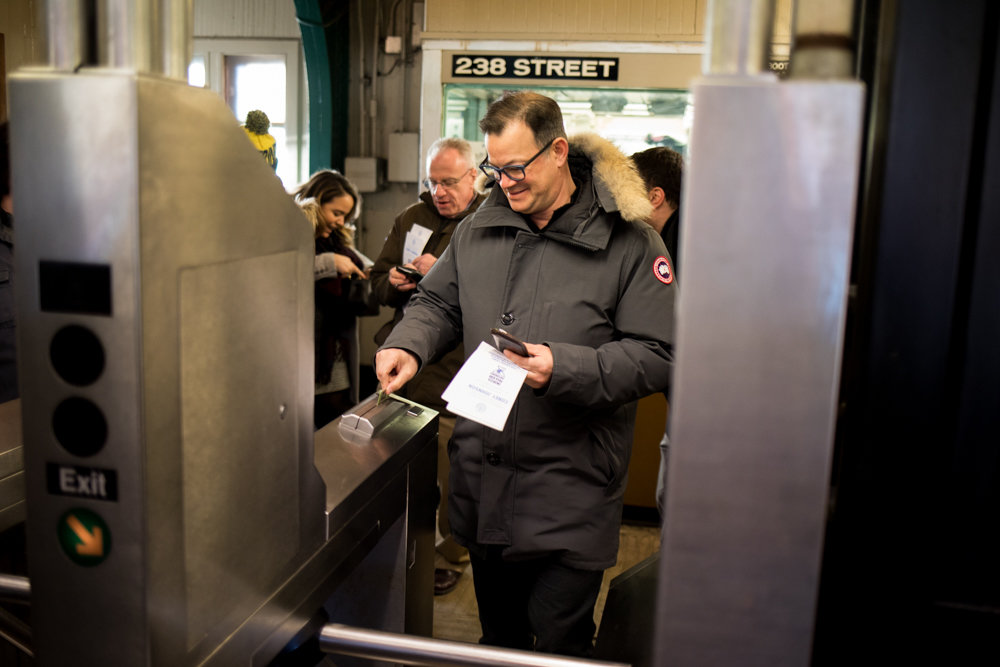 Councilman Andrew Cohen swipes his MetroCard to step onto the downtown 1 train platform at West 238th Street to conduct a transit tour with other local elected officials in order to better understand how commuters feel about the MTA.
JULIUS CONSTANTINE MOTAL
Previous Next
By ZAK KOSTRO

Corey Johnson has vowed it’s high time the city and state tackle an admittedly onerous task — fix public transit. But to get it right, he first wanted to hear from riders about how life as a straphanger could be.

Johnson — who not only leads city council but also is the city’s acting public advocate — claims he’s heard enough from MTA. If effective change is going to happen, riders must speak up.

“We hear from the MTA on what the delay issues are, what the funding issues are, how they want to improve customer service,” Johnson told The Riverdale Press. “I want to shine a light on this issue — the plight of straphangers every single day. Six million people are affected.”

That’s why he claims his priority during his 45-day acting public advocate stint is to “be out there and listen” to what riders — whether they hop on transit every day, or just once in a while — really want. “That’s what this (tour) is about.”

And apparently, a few of them actually were interested in sharing a piece of their mind with Johnson.

A minute of your time

In fact, more than 800 riders responded to a survey Johnson, along with various staffers and fellow politicos, handed out at stations throughout the five boroughs during a five-day transit tour Johnson led beginning in Queens Jan. 7, spokesman Juan Soto said. The whirlwind romp brought them to Brooklyn on Tuesday, Staten Island on Wednesday, Manhattan on Thursday, before finally landing at two Bronx stops Jan. 11, including West 238th Street and Broadway on the 1 train.

There, the council Speaker — along with newly sworn-in state Sen. Alessandra Biaggi, Councilman Andrew Cohen and Assemblyman Jeffrey Dinowitz — chased after weary commuters seeking feedback on the good, the bad and the ugly about their quotidian journeys, and how they’d like lawmakers to fix them.

Riders, meanwhile, also had a chance to respond online, where nearly 10,000 weighed in, ramping up the total number of responses to more than 10,700, Soto said.

On the uptown platform Friday afternoon, as trains rumbled into West 238th just ahead of the thick of rush hour, commuters — many of them probably ending another taxing week battling the rent monster — flooded the platform. The elected officials wanted just a minute of their time, because that’s literally how long the survey would take them, Johnson said, as one rider knocked it out right on the platform, in Spanish.

Johnson, Biaggi, Cohen and Dinowitz rushed to hand out surveys as riders made a beeline to leave the elevated platform. Both Johnson and Biaggi stressed transit needs fixing now, but they’ll need rider feedback to help them get it right when it comes to pushing for change at both City Hall and in Albany.

Commuters “should be able to go to and from work in a very safe way, a very reliable way,” Biaggi said. “And it’s up to us to make sure that happens.”

Yet, accomplishing it also depends on cooperation between city and state, Cohen said. “The governor controls the MTA. It’s in need of a cash infusion and modernization, and I think that the state really needs to do their part.”

Cohen counts himself among millions of riders weathering perpetually slow buses and overcrowded subways, which he claims just isn’t fair.

“It’s not like we’re not paying our share,” the councilman said. But what’s still needed is “a commitment from Albany to do the right thing.”

Crucial to getting it done is funding the MTA’s so-called “Fast Forward” plan to salvage transit swiftly and safely, Johnson said.

“The city has to work with Albany,” Johnson said. “We need to work with everyone to get the funding that’s needed” to boost service to where efficient, stress-free commutes become more the norm than the exception.

One cash source both Johnson and Biaggi support is congestion pricing, which asks drivers to pay a surcharge to enter certain heavily trafficked zones — typically a central business district — during particular times.

“We need to push and get that done, because this is not just a transportation issue,” Johnson said. “It’s also a climate change issue and environmental issue.”

In fact, proponents claim such a proposal would help by reducing the number of cars on the road, which would not only reduce fuel consumption and polluting emissions, but also accidents, according to published reports.

Yet, congestion pricing has clashed with politics more than once, meeting obstacles in Albany’s back rooms and hallways. Among its more vocal opponents has been Dinowitz, who’s claimed funding mass transit ought to transcend congestion pricing.

Congestion in London, for example, decreased in the short term but is now worse than before their congestion pricing scheme was implemented back in 2003 — and their fee has more than doubled — Dinowitz told The Press in a Point of View piece published last March, citing a New York Times story.

“Many supporters of congestion pricing like to tout its progressive approach, saying that it is effectively a tax on the rich because the people who drive into the (city’s central business district) have more money than everybody else,” Dinowitz wrote. “But there are many people who drive their grandparents to medical appointments at some of New York’s finest hospitals, who have to drive because our mass transit system isn’t fully ADA compliant, or who just want to go to the theater for their one night out a month with family and friends.”

Following his stop in Kingsbridge, Johnson zoomed off to East 149th Street and the Grand Concourse to meet up with Councilman Rafael Salamanca and borough president Ruben Diaz Jr., to do it all one last time before wrapping the week-long transportation-focused reconnaissance.

Johnson’s office can’t say just yet what riders are most chagrined about — whether it’s delays, service changes and re-routing, or even potential fare increases — because they’re still compiling those nearly 11,000 survey responses.

But even before all the answers are in, Biaggi claims she already has a sense of what riders probably are feeling.

“People are not happy with their ride on the subway, and they shouldn’t be,” the senator said. “It’s a miserable ride. And it’s so frustrating, because the ride could be so much more efficient. This is the literal economic driver for this city — for people to be able to get to and from work — and we owe it to everyone to get it right.”