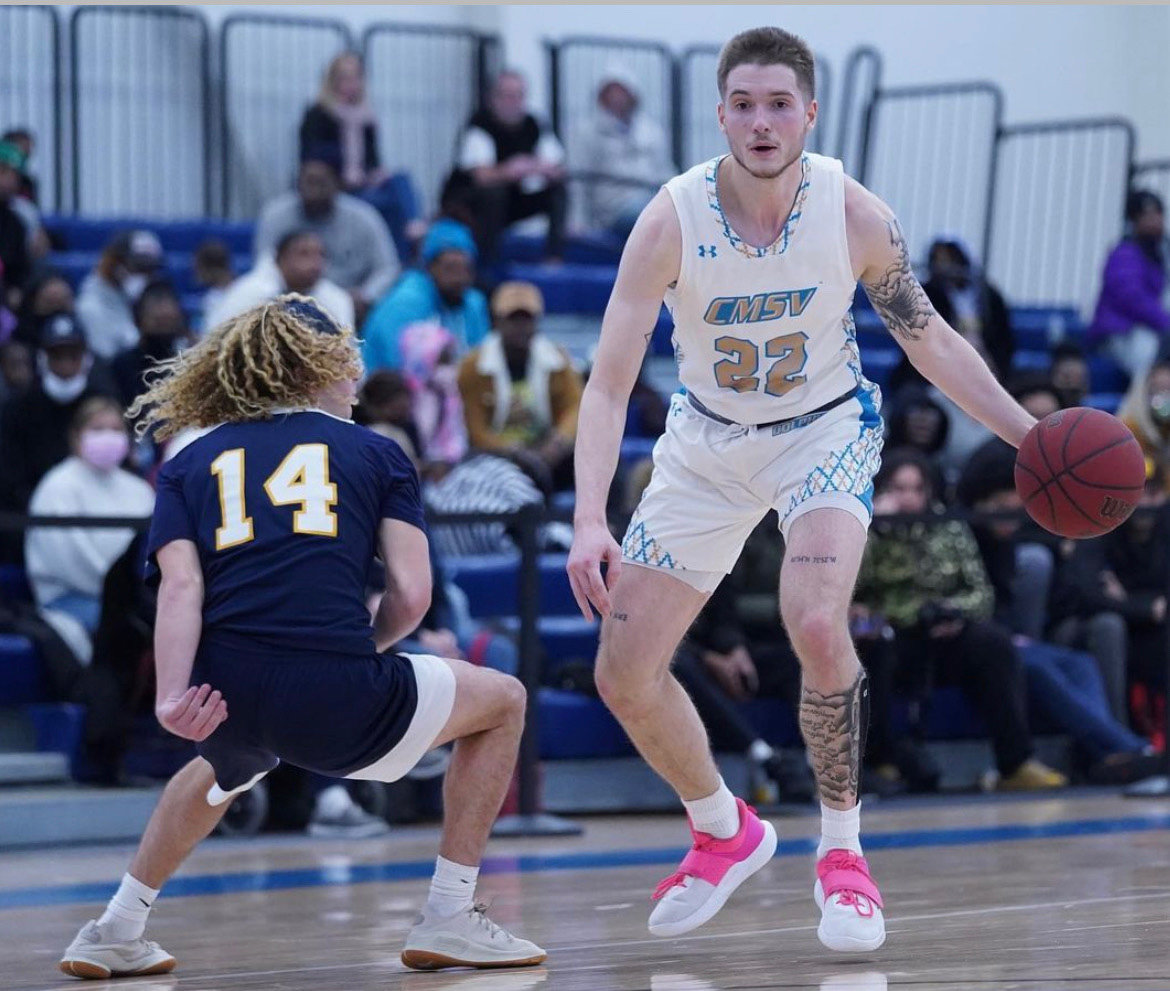 After transferring over from Division Two Concordia College, Dan Porcic had an instant impact on the court last season for the College of Mount Saint Vincent men’s basketball team. With his last season now underway, Porcic is settling for nothing less than a Skyline Conference Championship, which would be the program’s first since 1997.
Courtesy of CMSV Athletics
By Pete Janny

For the fourth season in a row the College of Mount Saint Vincent’s men’s basketball team has at least one Division One opponent on their schedule. This year’s slate brings them to crosstown Manhattan College and Long Island University.

The early portion of the NCAA college basketball season will present 498 games around the country between Division I schools and non D-I institutions. These matchups may be perceived as David vs. Goliath on the hardwood, but that hasn’t stopped The College of Mount Saint Vincent men’s basketball program from scheduling them. The 2022-23 campaign has extended their streak of scheduling D-I opponents to a fourth season.

It started with the University of New Hampshire one year and then Columbia University in back-to-back seasons. After a trip to Holy Cross last season, they scheduled crosstown Manhattan College and Long Island University for this season.

The most improbable odds of victory clearly do not factor into head coach James Mooney’s decision to play those D-I schools. Win or lose, his players walk away with something much more valuable, an almost spiritual experience living out a childhood dream.

“A lot of them aspire to be Division One players,” Mooney said. “They want to be scholarship players and they want to be on TV and all that hoopla.”

Entering his fifth season at the Mount, Mooney believes his team may be poised to break through. The last couple of seasons have been challenging, including last year’s 10-15 finish, with adjustments to make up for the lost time from the pandemic. Mooney took on the challenge of rebuilding the roster by adding a mixture of exciting freshmen and transfers.

“I’m really happy with the roster we have,” Mooney said. “The freshmen add some size and athleticism and the two transfers (D.J. Tucker and Josh Cabezudo) are probably the two best transfers we’ve had in my tenure.”

While much improved on paper, the top of their wishlist remains a Skyline Conference Championship, which has been an elusive prize since the last time the Dolphins won it in 1997. The hope is the rigors of their non-conference slate of games will teach them how to handle adversity early and often before facing Skyline Conference powerhouses like Yeshiva and Farmingdale State.

“We definitely want to be one of the top four teams in the conference,” Mooney said. “And from there, let it transpire into a championship.”

The Mount will play at Manhattan’s Draddy Gymnasium on Nov. 18, only a couple weeks after the school’s administration fired longtime head coach Steve Masiello two weeks before the start of the season. Mooney said he found out about it after leaving practice on Oct. 25 and even had one alumnus text him that the Mount could have the Jaspers on “upset alert.”

Talk like that, however amusing it may be, is nothing more than banter to Mooney. He is focused on getting his team ready for another exhibition game against a group of players he thinks probably have a chip on their shoulder.

“RaShawn Stores is going to get a lot out of those guys,” Mooney said of the new coach of the new look Jaspers, who are 0-2. “And trust me, the remaining guys are going to have a chip on their shoulder.”

In the Mount’s loss to Long Island University on Nov. 14, Mooney had a chance to go head to head with Rod Strickland, the former NBA star and Bronx native who was hired at LIU over the summer. It felt a bit surreal at first, Mooney admits, but then he focused on competing and outwitting Strickland even though the chasm of talent had the final say on the lopsided result.

“I don’t care what your NBA background is, I am taking pride in what I can do as a coach,” Mooney said. “I really don’t care who’s on the other side… they’re going to be bigger, faster, stronger.”

Senior guard Dan Porcic has never suited up for a D-I school, but got a firsthand look at some heralded prospects while playing prep ball in his home state of Connecticut. Current Detroit Pistons player Hamidou Diallo and former Manhattan Jaspers star Jose Perez are just some of the big names Porcic has called teammates before. Being cultured and well-connected on the hoops circuit gives Porcic all the more motivation to pass on what he has learned to his teammates at the Mount.

“It’s a fun atmosphere and you get to play on ESPN,” Porcic said. “It will prepare us for the rest of non-conference and conference games if we could play well against the Division I schools.”

Porcic found a home in Riverdale after transferring over from the now defunct Division Two Concordia College before last season. He averaged 18 points per game to go along with six rebounds per outing for the Mount. His scoring efforts, which included a 38-point performance at Purchase College, rewarded him with a spot on the First-Team All-Skyline Conference.

With another year of eligibility after this, Porcic will weigh his options, which could include becoming a graduate assistant elsewhere or even getting his shot on a D-I roster. However, he can’t predict which coaches would potentially call him.

“I’ll have (Coach) Mooney do that for me,” said a humble Porcic with a laugh.

Senior guard Aaron Darab believes in the talent in the locker room. Darab vouches for the grind they put in every day, citing the 6 a.m. practices along with a busy class schedule. It has instilled in him discipline and work ethic for the rest of his life

Darab wears the badge of being a Division Three player with pride, no matter who may have underestimated him and his teammates along the way. Just this year, Ryan Turell from conference rival Yeshiva became the first Orthodox Jew selected in the NBA G League draft.

“I’m super proud of everything he’s achieving and hope he keeps going,“ Darab said of Turrel, who he faced three times last season. “There are kids at Division III schools who are just as good (as Division I players) but may not have had the same exposure.”

It all starts with Mooney and the positive outlook he projects on his team. It’s first about being a student of the game for the 38-year-old coach, while mixing in some degree of historian and raconteur on the side to inspire his players.

“Our coach told us that and that’s why I think he likes to schedule that game against them every year,” Darab said. “NYU is a big name school everyone hears around New York.”

Looking back, it’s easy to point to that famous era of NYU basketball as one that came at the doorstep of a transformative time in athletics.

The Metropolitan New York Basketball Conference — which featured NYU and all the top colleges in New York City — eventually folded in 1963 due to gambling rings and other corruption. Born from that was the realignment to the three divisions of college sports that exist today.

And yet another transformative era may already be upon us, with the growing popularity of Name, Image and Likeness opportunities and the shake up with the transfer portal.

“You’ll see a lot of drop down from Division II to Division III,” Mooney said, while also referencing Porcic’s decision to transfer down. “It’s just a matter of fact of what every school, level, and conference has to deal with.”

In the season opener on Nov. 11, the Mount lost 91-66 on the road at Centenary University in Hackettstown, New Jersey.