The women who made Edgar Allan Poe 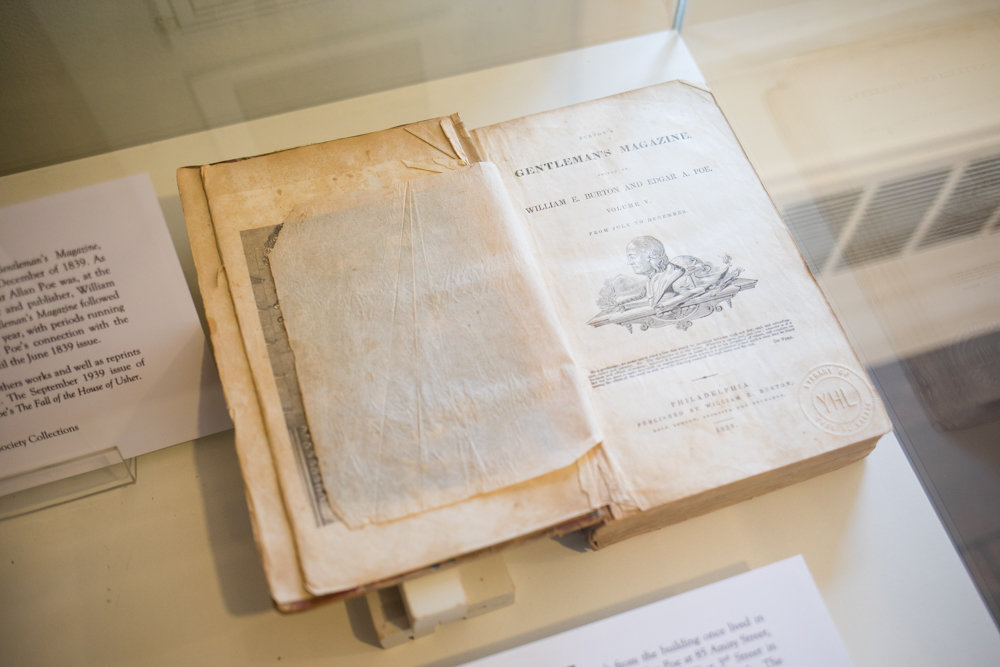 Among his literary exploits, Edgar Allan Poe was an editor for and contributor to Burton's Gentlemen's Magazine from 1839 to 1840. 'His Muse: The Women of Edgar Allan Poe's Life' is on display at The Bronx County Historical Society through April 7.
JULIUS CONSTANTINE MOTAL 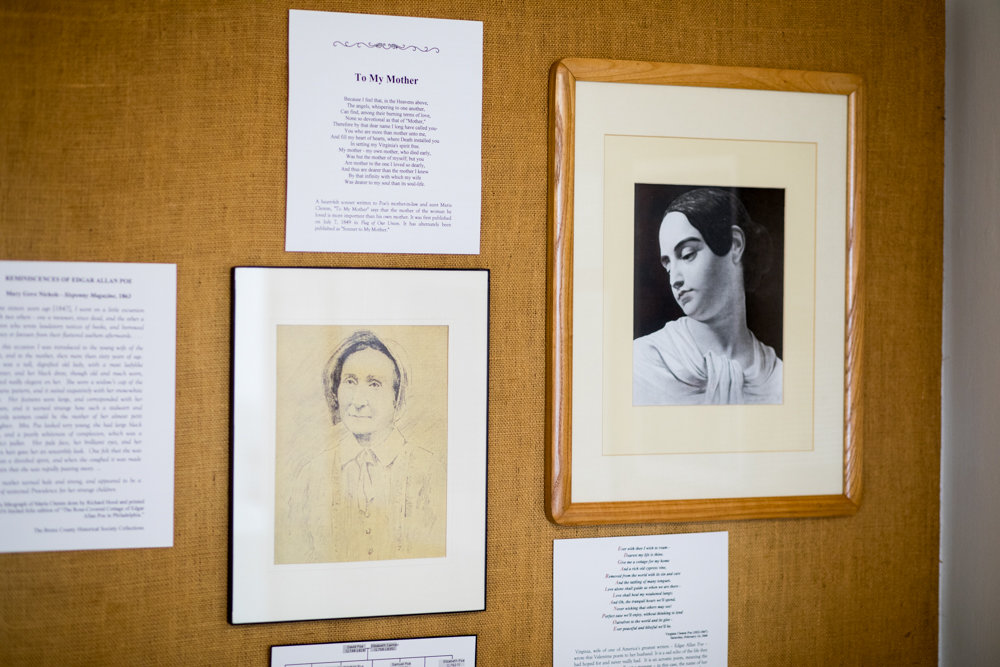 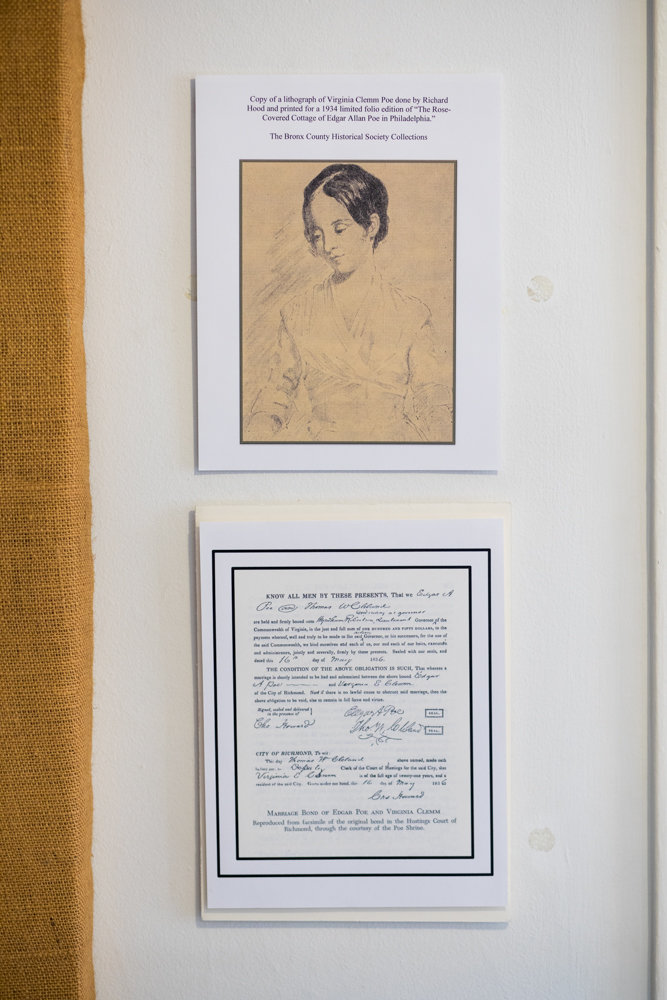 An illustration shows Edgar Allan Poe's wife and first cousin Virginia Clemm Poe above a reproduction of their marriage license. 'His Muse: The Women of Edgar Allan Poe's Life' is on display at The Bronx County Historical Society through April 7.
JULIUS CONSTANTINE MOTAL 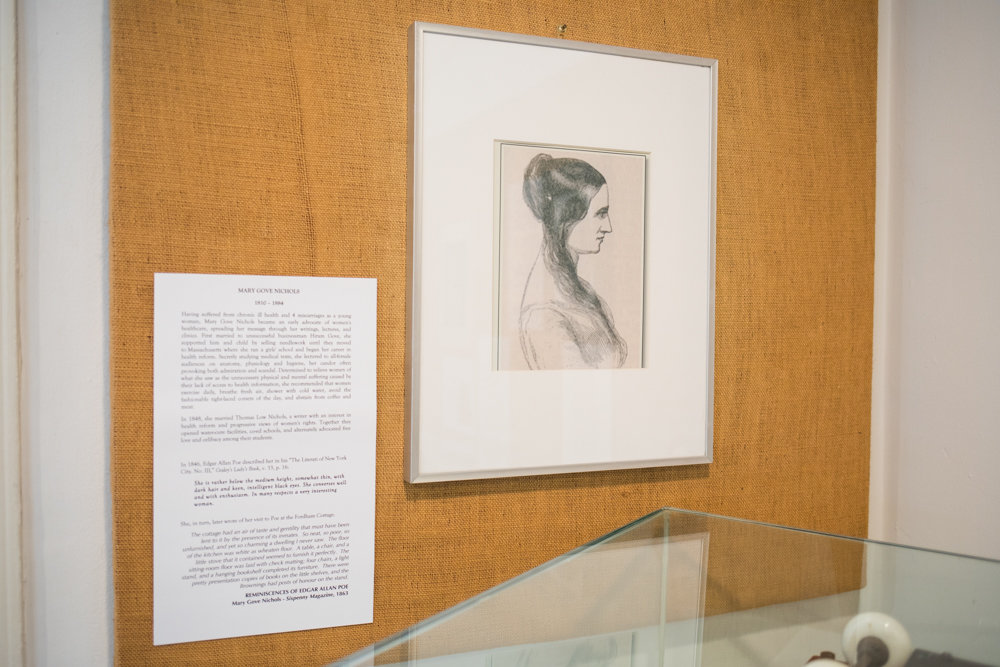 Mary Gove Nichols, a staunch advocate for women's rights and health reform, was one of the women who influenced Edgar Allan Poe's life.
JULIUS CONSTANTINE MOTAL 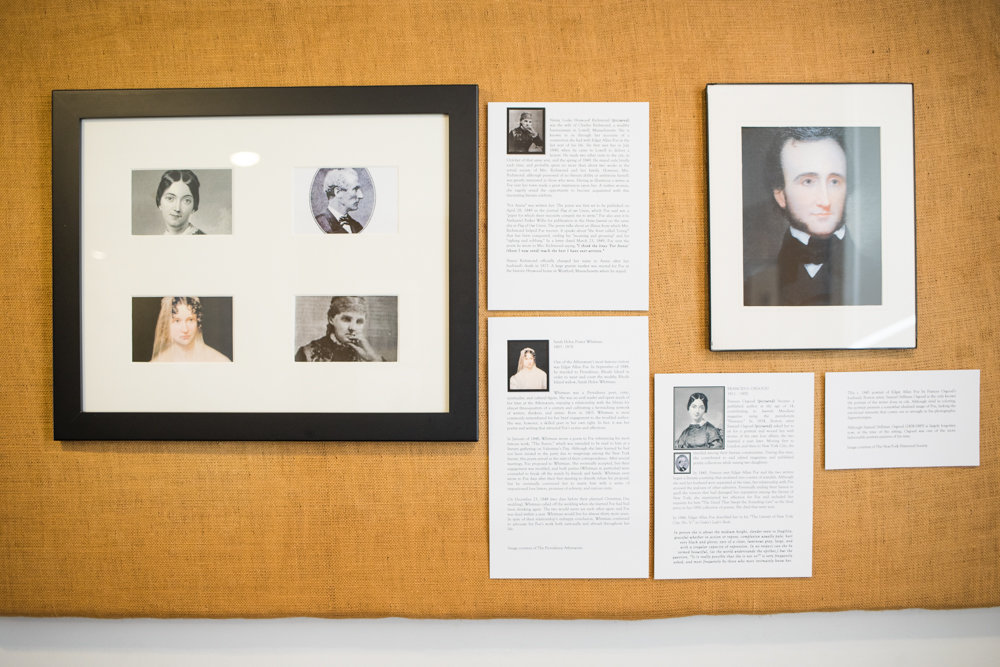 A new exhibition at The Bronx County Historical Society paints a composite picture of the influence women had on Edgar Allan Poe's life through illustrations and historical texts. 'His Muse: The Women of Edgar Allan Poe's Life' is on display through April 7.
JULIUS CONSTANTINE MOTAL 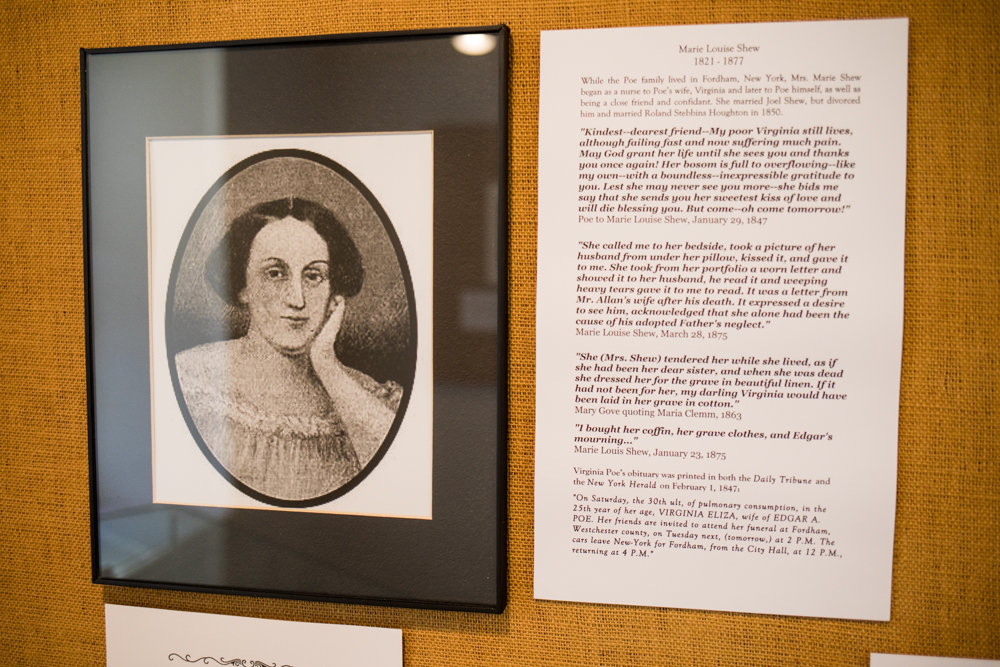 Mary Louise Shew was the nurse for Virginia Clemm Poe, the wife and first cousin of the writer Edgar Allan Poe, and later became his nurse after Virginia died. 'His Muse: The Women of Edgar Allan Poe's Life' is on display at The Bronx County Historical Society through April 7.
JULIUS CONSTANTINE MOTAL
Previous Next
If you go ...

WHAT: His Muse: The Women of Edgar Allan Poe’s Life

COST: Admission to The Bronx County Historical Society is $5, and $3 for students and senior citizens.

Behind every man is a woman who helped shape his life, and Edgar Allan Poe is no exception.

Poe, whose poetry and short stories are staples in American literature, was constantly inspired by the relationships he had with women. It began when he lost his mother as a toddler, and went off to live with the Allan family.

It continued at 27 when he married Virginia Clemm, his 13-year-old first cousin.

Poe then had all sorts of women who found a way into the final years of his life, especially once he settled in Fordham in a home now known as Poe Cottage.

The story of these women are front and center in “His Muse: The Women of Edgar Allan Poe’s Life,” on display at The Bronx County Historical Society through April 7. The exhibition looks beyond Poe’s brief relationship with his mother, as well as his interactions with his estranged sister Rosalie and his wife to explore how love and friendship made its way into what seemed like Poe’s continuous battle with depression.

“We thought it (would be) fitting to talk about women prior to the right to vote and talking about the women who really influenced a lot of Poe’s work, despite him writing such dreary and mysterious works,” said Vivian Davis, education coordinator at the historical society. “He also wrote poetry and love letters to these women.”

In order to accurately represent who these women were, the historical society worked with Poe Cottage at 2640 Grand Concourse and searched through internet archives to retrieve information about them.

His family is more than familiar to anyone who has studied anything about Poe, but one woman many might not know is poet Sarah Helen Whitman, a friend of Poe’s who eventually became a love interest. The two got engaged in 1848, just a year after Clemm died, but the wedding was called off two days prior because Whitman became frustrated with Poe’s alcoholism.

Davis always knew about Whitman, but learning about how Whitman stood her ground was surprising.

“I didn’t realize how close they were to marriage, and then just calling it off right at the last minute because she was an independent woman herself and she didn’t want to get entangled with Poe’s depression and drinking problem,” Davis said.

Another prominent woman in Poe’s life was Maria Clemm, Virginia’s mother. Poe had written “To My Mother,” a sonnet directly inspired by their close relationship.

“He had so much affection for Maria Clemm, and she helped him even after Virginia passed away to kind of get out of his depression,” Davis said.

The inspiration to explore these women goes beyond just understanding who Poe was as a person. It also ties into the historical society’s “Women’s Suffrage and New York City: A Centennial Celebration,” an exhibition looking back at the 100th anniversary of women’s suffrage that’s on display through April 11.

Davis and her historical society team thought it was fitting to have the two exhibits on display in order to give people a more in-depth understanding of what women’s suffrage was, but also what women were like between 1800 and 1850 apart from the Seneca Falls Convention in 1848.

“A lot of sites in the United States are highlighting women because of the 100th anniversary of the right to vote, and I think it’s a very noble thing that museums are doing,” Davis said. “However, once that’s over, we have Women’s History Month, but I want to continue the highlighting of women, especially in the Bronx.

“So by having this exhibit, it kind of tells the story of women in the early 19th century — something that none of us really know about.”

Davis believes it’s important to have these two exhibitions side by side in order to get a better idea of how feminism grew into what it’s become.

“Unless we know how women lived prior to that, we really don’t know why women then pushed for that right” to vote, she said. “So by understanding what came first, we can understand, then, what came later.”

“His Muse: The Women of Edgar Allan Poe’s Life” has been on display since last October, and Davis recalls people having been surprised about what they’ve learned because they’ve never looked at Poe’s life from this perspective.

When people come to see the exhibition, Davis wants them to walk away with a better comprehension of women’s history.

“I hope people understand that women were just not at home,” she said.

“They were not just dutiful housewives. You have all of these women that had different career paths kind of molded into Poe’s life.”

And when it comes to chronicling a person’s life through relationships in general, Davis believes this can apply to anyone.

“I think talking about a person’s life overall is important,” she said. “You can’t just tell one side of the story, whether that’s male or female. I do think it’s very important to talk about the people in a certain person’s life to understand how that person worked and how they thought.”