These goats could be Vannie’s GOAT 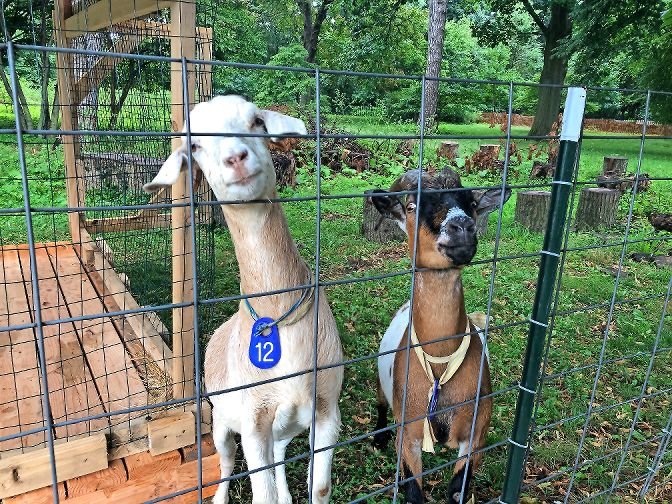 As of July 24, Iris, left, and Manny have been eating the invasive species on the eastern side of the Van Cortlandt House Museum grounds. The goats have been more effective than humans when it comes to getting rid of invasive species.
Courtesy of Christina Taylor 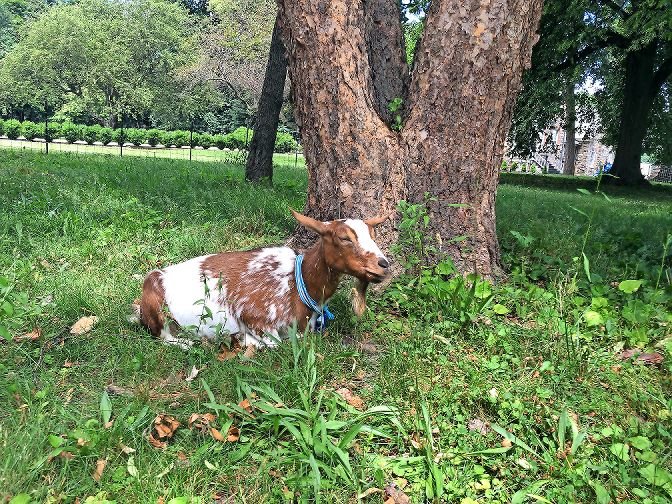 Lulu is one of the goats who stays in Van Cortlandt Park to eat away at the burdock and porcelain berries — typically invasive plant species that’s hard to get rid of otherwise. Lulu stayed at the park between June 30 and July 24.
Courtesy of Christina Taylor 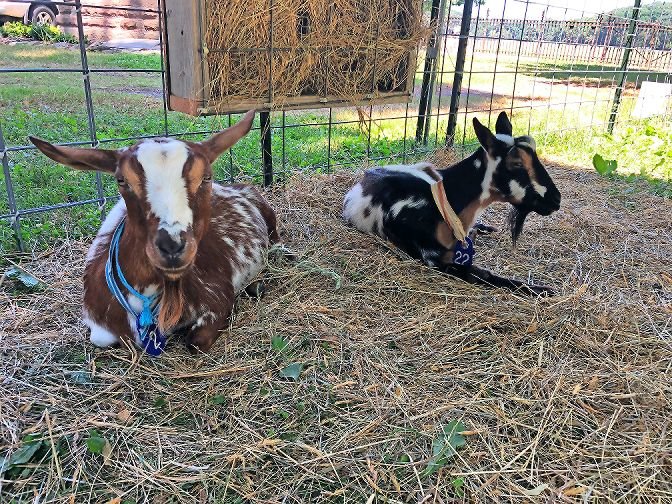 Lulu, left, and Patches were the first pair of goats staying at Van Cortlandt Park this summer to help rid the grounds invasive plant species. Lulu and Patches stayed to eat invasive species in the park between June 30 and July 24.
Courtesy of Christina Taylor
Previous Next

‘The goats are something positive and happy — which we could all use right now.’”
-Christina Taylor
By MAYA KATZ

Berries are nice and tasty, but burdock and porcelain berries are not what you want as part of a park’s ecosystem.

Yet, those invasive plant species have long plagued the eastern side of the Van Cortlandt House Museum grounds. And while poison ivy may not affect this particular part of Van Cortlandt Park, those allergic reaction-causing plants have prevented walkers from moving freely on these grounds.

Luckily for Vannie, however, there is a secret weapon. A few of them, in fact, going by names like Iris, Manny and Lulu.

They’re not summer high school interns — although many of them have spent time picking out weeds from the area. No, this is help coming in a bit of a different form: goats.

No, not GOAT — “greatest of all time,” although these goats could be GOATs. But actual plant chomping, bleating goats.

Setting goats loose on the invaders was something Riverside Park tried last summer, and it seemed to work. So much that this year, Christina Taylor decided it was time to give it a try at Vannie.

Taylor, the programs and operations director for the Van Cortlandt Park Alliance, found some help from Green Goats — a collective of retired dairy goats and family pets who typically make their home in the Dutchess County community of Rhinebeck.

A pair of goats have been eating away at the invasive species on the eastern side of the Van Cortlandt House Museum since the end of June.

These plants might be tasty for goats, but they’ve hindered the growth of grass and trees in this particular area.

“The farmers from Green Goats told us that for two growing seasons in a row, the goats will not only eat all of the invasive species, but they will eat roots and get rid of the seed source,” Taylor said. “And our problem will be solved.”

That means in two years with the goats filling their bellies between July and late September, Van Cortlandt will once again be able to plant in the area.

Vannie’s primary goats — Lulu and Patches — have been feasting on the grounds for about a month, finishing up around July 24. Lulu is 4 years old and the mother to Patches, who is 2.

Both are Norwegian dwarf goats who, by order of the city’s health department, undergo veterinarian checks and rabies shots every 30 days.

Rather than find a local vet to take care of this, Taylor simply sends the accomplished goats back to Dutchess County in exchange for two fresh mouths.

With Lulu and Patches gone, the job of restoring Vannie has belong to Iris and Manny. For them, it’s been all work and no play. In fact, no one can even pet them — they’re literally covered in the poison ivy oils they’re eating. Still, Lulu and Patches have been drawing an audience — from a distance.

“Lulu and Patches absolutely love people,” Taylor said. “They do like to come over and check out people, which has been great. And we do enjoy having people watch them.”

Both staff members from Van Cortlandt Park Alliance and the Van Cortlandt House Museum worked together to take care of the goats. But really, Lulu and Patches are pretty low maintenance, Taylor said. Sure, they need to have their bedding changed, and all those plants they ingest also come back out eventually, so that needs cleaning up as well. But the goat pair enjoy a special shelter designed just for them protecting them from rain and other elements Mother Nature might throw at them.

And, of course, the staff members also make sure Lulu and Patches have plenty of food and water.

“We have to make sure that the goats have fresh water at all times,” Taylor said. “For the most part, all of the foods they eat are the weeds, but we do supplement that with hay and grains.”

The goats have made a difference ridding the park of a good portion of invasive species humans could never accomplish, because unlike the goats, they could never get down to not only the roots, but the seed source, preventing more of the plants popping up again like, well, weeds.

“The goats are helpful since they can work every day,” Taylor said. “We can get more work done in the park this way.”

The goats aren’t the first animals to come to help out in the park. In the past, dogs from Geese Chasers have done exactly that, chased off geese, ensuring there is far less geese droppings on the Parade Grounds.

The goats also have developed a bit of a social media following, providing a bit of a boost to Vannie’s Twitter and Facebook feeds. That’s given some of the alliance’s volunteers a chance to spread awareness about the very invasive species Lulu and Patches are tasked to gobble up.

“We are also using the goats to teach people about the invasive species and why we do what we do,” Taylor said.

“I think it has been really nice for the community to be able to see them. The goats are something positive and happy — which we could all use right now.”