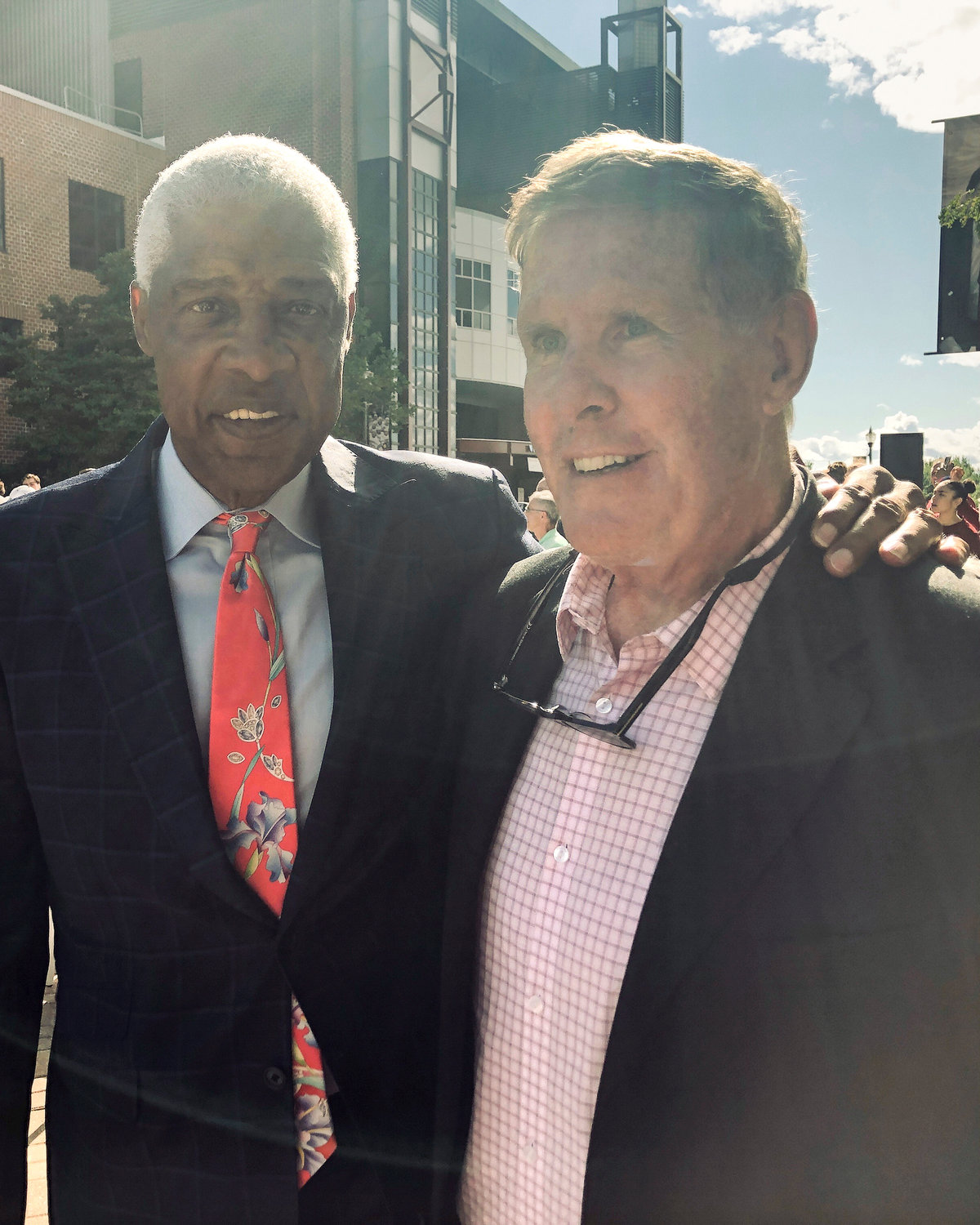 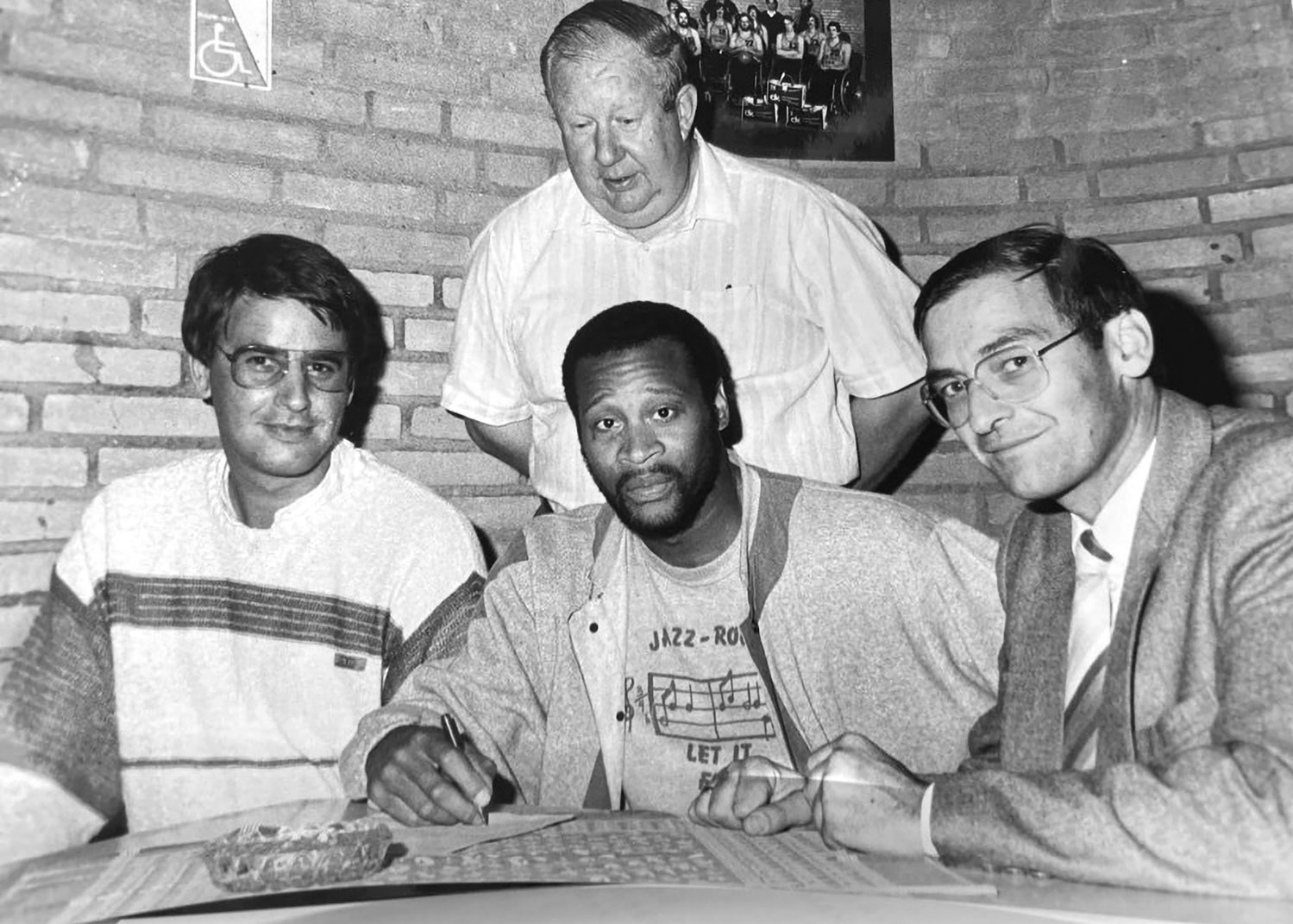 After playing at Manhattan College, Tom Lockhart discovered a new life overseas revolving around his experiences playing in Sweden and Switzerland. He is at the forefront of the Bronx Basketball Hall of Fame Facebook page which posts tributes daily about Bronx Basketball legends.
Courtesy of Tom Lockhart 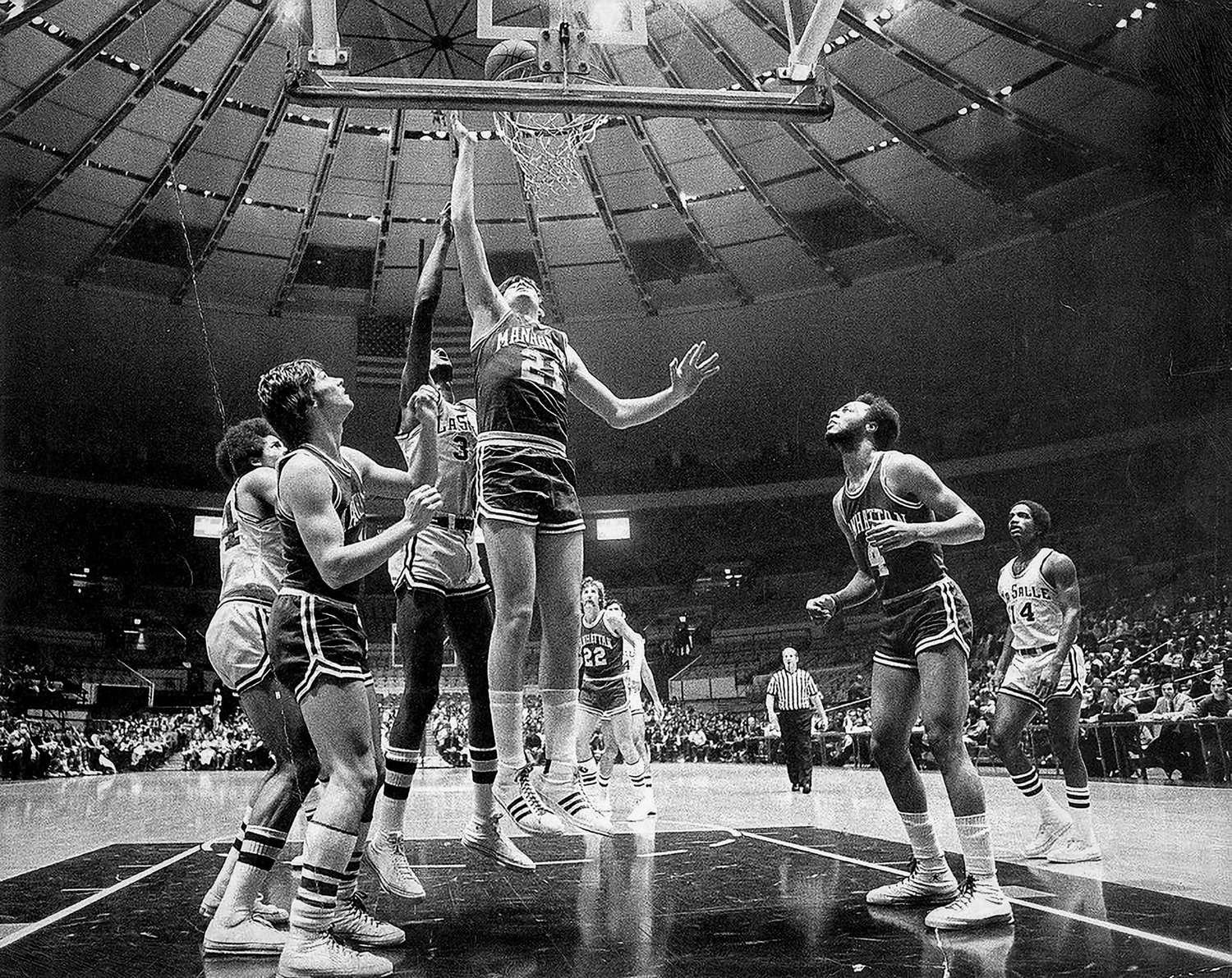 Manhattan played their home games at Madison Square Garden in the 1970s when Tom Lockhart and Bill Campion were on the team. Now, they are teaming up again to support the Bronx Basketball Hall of Fame.
Courtesy of Tom Lockhart
Previous Next
By Pete Janny

Social media and historical research do not usually go hand in hand. And yet, the never-ending nature of online connectivity has paved the way for a new digital community with local significance. The Bronx Basketball Hall of Fame Facebook page has provided just that.  (https://www.facebook.com/groups/3118341825155347)

Last November, William Howard Taft High School alum Derek Doward created the private Facebook page for Bronx basketball that now boasts well over 3,000 members. Others, such as former Manhattan College stars Tom Lockhart and Bill Campion, have been there along the way to help identify the Bronx’s best ball players throughout history.

According to Lockhart, the grassroots hall of fame is not sponsored by any local institution or organization—at least not yet. He says it is bringing together those who love both basketball and history.

“We’re just in it for a few months, but the response is overwhelming,” Lockhart said. “It’s the diversity of Bronx basketball that makes it so powerful.”

The posts from the page are daily, which allows members to learn on demand about basketball in the Bronx seemingly on demand. First, Lockhart takes suggestions for nominees and then writes brief biographies about them. He says the criteria for induction includes being raised in the Bronx, attending high school or college in the Bronx or having a direct impact on Bronx basketball as a player or coach.

“We are trying to cover 100 years of basketball in the Bronx,” Lockhart says. “Obviously having a basketball background, but you could also be nominated for your community work.”

A 20-member selection committee is called upon to have the final say on who gets in. The 2021 class was the first ever and had 15 inductees headlined by Dewitt Clinton High School’s very own Nate “Tiny” Archibald and Knicks legend Dick McGuire.

The 2022 class is in the works now with the voting process set to begin soon. With the pool of candidates being so wide-ranging, Lockhart admits it won’t be easy to notify the inductees or their loved ones of the good news.

“I prefer something really in the mail but the announcements will probably go over the Facebook page,” Lockhart says. “There are people who may get nominated who don’t even know about our page at the moment.”

Archibald is considered a living legend of Bronx basketball. He now sits on the advisory board for the Bronx Basketball Hall of Fame.

“I always thought he was the best player to come out of the Bronx,” Lockhart said of Archibald. “Anything we need to get done or any advice we need he’s there.”

For Lockhart, a luxury of playing for the Jaspers in the 1970s was the home games at Madison Square Garden — which preceded the more permanent residency of St. John’s and the original Big East Conference at the “World’s Most Famous Arena.”

“We played Indiana (in 1975) in the Garden when they were number one,” Lockhart says. “We played South Carolina with Alex English and won, which was one of my best college games.”

It was at Manhattan where Lockhart first teamed up with the 6-foot-9 Campion. Unlike Lockhart, Campion felt a connection to Manhattan from an early age. Everything from a summer reading course he took in middle school to his driving test, all roads seemed to lead back to the Riverdale-based school. Before his freshman year at Rice High School in Harlem, Campion met coaches Ken Norton and Jack Powers from Manhattan for the first time after they discovered him in a pick-up game on campus.

The rest, as they say, is history.

“I lived 10 minutes away so I used to go and work out in the mornings,” Campion said of his summer workouts during college. “Ken Norton would give me the keys to the gym.”

He became a 1,000-point scorer for his career and at the end of his junior season was awarded the prestigious Haggerty Award for the best college player in Greater New York City. Campion remains the highest all-time rebounder in Manhattan College history with 1,070.

It was the best of times for Campion.

“You got the subway down the street, you could go downtown, and you could go home if you live in the city,” Campion said. “And the campus is nice.”

As fate would have it, Campion and Lockhart crossed paths again at a free agent camp with the Milwaukee Bucks the same offseason Kareem Abdul-Jabbar left for the Lakers. The opportunity didn’t work out and both went on to play professional basketball in Europe, with Campion playing one season in Italy and Lockhart spending the rest of his career in Europe with stops in Sweden, Switzerland and the Netherlands.

“A lot of New Yorkers and quite a few guys from the Bronx played and still live in Europe,” Lockhart says.

After that one season abroad, Campion returned stateside to continue his hoops journey with the Washington Generals, the team known for losing at will against the Harlem Globetrotters — except on the rare occasion such as when Campion and the Generals pulled off an upset over the famous entertainment team.

“You could hear a pin drop,” Campion said of the crowd reaction.

And it’s those types of unique player facts that Lockhart is trying to uncover with his research for the Bronx Basketball Hall of Fame. He wants to bridge the gaps in knowledge between different eras of Bronx basketball — and, in some cases, the various sections of the borough.

“We wanted to include areas of that Bronx that certain people may be not familiar with,” Lockhart said. “The guys on the east side may not really know much about Billy Campion and that type of thing.”

Tom McLaughlin’s introduction to the sport came while growing up on the east side in Woodlawn. His early years coincided with Campion’s and they knew each other from the streetball scene. And like Lockhart and Campion, he too played overseas.

“We all grew up together, we played in different places and we played against each other,” McLaughlin said. “That’s part of growing up in New York, you get a chance to play against the best.”

After playing at Fordham Prep, McLaughlin went on to play at UMass with none other than Julius Irving. A few years earlier, McLaughlin recalls spotting his future friend and teammate at a tournament when Irving was still growing into his athletic frame.

“He was on a team from Long Island and was 6-foot-3 at the time,” McLaughlin said. “And then he went to UMass and in his first year he was 6-foot-6.”

McLaughlin’s new coach at UMass had never seen him play after he transferred from the University of Tennessee. And so he told him to play one on one against the man nicknamed Dr. J.

“Boy, he had long arms,” McLaughlin said. “He was like an octopus.”

It’s from playing against the best why these men are hoping to turn the Bronx Basketball Hall of Fame into something special.

“We want to have a physical location and are hoping we can interest Fordham University or Manhattan College or Catholic schools that have the space,” Lockhart said. “And we’ve got some people on the board that could help us.”

The trio of Lockhart, Campion and McLaughlin are joined by seven others on the board of directors who all come from diverse backgrounds. Together, they are sharing their stories and experiences from the hardwood to provide a blueprint for young hoopers to follow.

“Basketball is a great sport, it gives you the opportunity in high school to get a scholarship to college,” Campion said. “The opportunities are wide open.”

“Fascinating” is the word Lockhart used to describe the annals of Bronx Basketball, which has introduced him to players of all sizes, skills and backgrounds. Lockhart says this is their chance to shine even if they might not actually make it into the Hall of Fame.

“It’s all about the guys who played this game and loved it,” Lockhart said. “They have got to get up on this Facebook page as well.”

The Bronx Basketball Hall of Fame is an ode to those who live and breathe Bronx basketball.