This Inwood gym's not down for the count 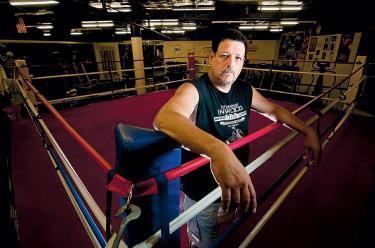 The Inwood Boxing Academy was against the ropes and its owner, Riverdale resident Joe Brender, was close to throwing in the towel.

A lifelong boxing enthusiast, the 57-year-old Brender fulfilled a personal dream by opening his own boxing gym in 2006. He spent tens of thousands of dollars of his own savings to get the place started and, over the next few years, Inwood Boxing Academy caught on with the local community, especially among the area’s large Dominican population.

The IBA is located near the intersection of Academy Street and Broadway, quickly became a place where teens could come in and learn to box, get in shape and release any anger or frustration on a punching bag, rather than resorting to violence, drug-dealing or troublemaking out on the streets.

But it soon became apparent that the less-than-adequate equipment and facilities were making it almost impossible for Brender to draw any form of corporate sponsorship or even bring in more paying members from outside the immediate neighborhood. Without the funding to make necessary renovations, the overall condition of the gym continued to further deteriorate and the longtime Riverdalian admits IBA was in serious jeopardy of closing.

“I owed the landlord back-rent in the six-figures and was just hanging on for dear life. Basically duct tape was the only thing keeping the uneven flooring and the beaten and battered punching bags together,” said Brender, who has lived in Riverdale since the mid-1970s. “The canvas of our ring was worn out and the ropes were loose and stretched out to the point that it was not safe for the fighters. We had a hole in the treadmill that I had to patch with glue and a flat tire kit. Honestly, the whole place was dark, dirty, smelly and generally ugly. I just kept hoping that something would happen to help us.”

Brender’s prayer would soon be answered. He recently became the latest beneficiary of Construction Intervention, a Discovery Channel show that helps save struggling small businesses from structural, architectural and aesthetic nightmares.