Courts tally 6,900 tenants left to fend for themselves in housing court, although actual tally higher 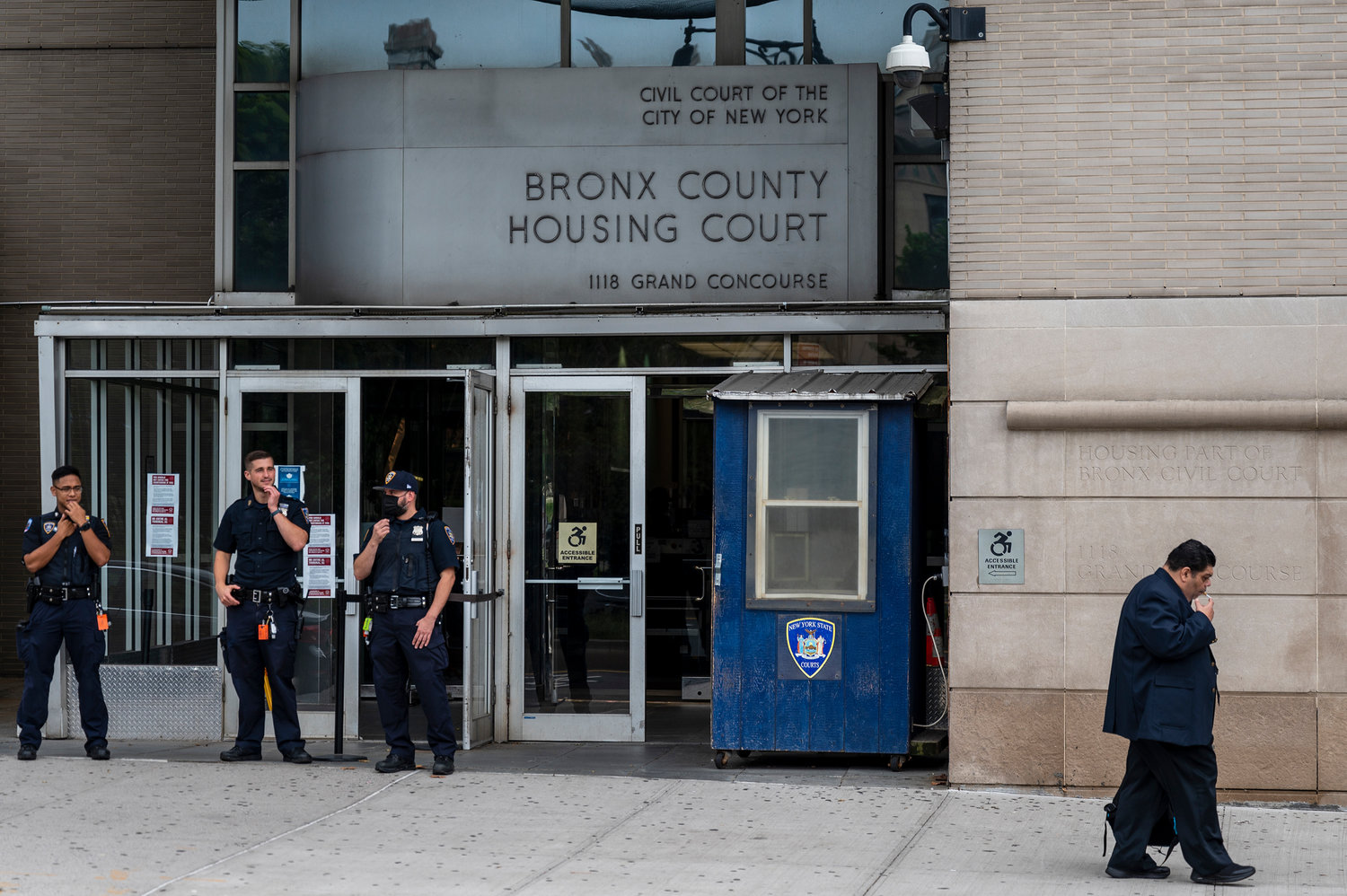 Security guards stand watch at the entrance to Bronx Housing Court Wednesday, Sept. 7, on Grand Concourse and E. 166th St. The court is the only one in the city continuing to conduct virtual intake and Right to Counsel eligibility screening for more than 3,000 eviction filings every month—by far the highest filing rate of any county in New York state.
Hiram Alejandro Duran
By Abigail Nehring

A perilously long escalator carries lawyers and tenants to the second floor of the Bronx Housing Court on a Wednesday afternoon. They step off gingerly and some splinter off towards Room 250, where a bank of computers awaits. The Help Room is provisioned with photocopiers offering 15 cents per page, stacks of court forms, and video conference stations – a few of the services available to the 136 households summoned each day to virtual intake for an eviction filing in the Bronx.

There’s a muffled din in the makeshift courtroom. Most login for their court appearance from home.

These proceedings still take place on Microsoft Teams in the Bronx, though the city’s other housing courts have resumed in-person litigation. For those who earn 200 percent of the federal poverty income level or less, this is a crucial opportunity to connect with one of several nonprofit law firms assigned to screen tenants for free legal representation.

The city’s Right to Counsel law – the first of its kind enacted five years ago — is falling far short of its founding vision of universal legal access, according to attorneys. Since March, lawyers have officially reported turning down 6,900 eligible cases due to capacity constraints, said public information officer Lucian Chalfen in an email to The Riverdale Press. That figure represents about 11 percent of total eviction filings in city housing courts during the same time period. But Housing Court Answers director Jenny Laurie said the number falling through the cracks is almost certainly higher.

Do it yourself
housing court

There are now more than 3,000 new eviction filings each month in the Bronx, the highest rate in the state, but still only about half the caseload courts saw before lawmakers called for a moratorium on evictions in March 2020. At that time, New York City was still rolling out its new Right to Counsel program to a limited number of ZIP codes.

With the program now operating fully, “there’s a fundamental mismatch between the volume of cases and the capacity,” said Raun Rassmussen, executive director of Legal Services NYC.

The situation at 2707 Sedgwick Ave. gives some indication of the general trend. There are six active eviction cases filed between May and September this year against tenants at this address, a six-story walk-up with 69 units purchased by Kenny Nasab for $7 million in 2007.

There is a staggering concentration of open housing violations here — 112 in all ranging from plumbing issues to cracked plaster to heat and hot water failures.

Only one of the six tenants facing eviction has so far retained a lawyer, according unified court system records online.

A household facing eviction next door at 2734 Sedgwick Ave, also owned by Nasab, has not retained a lawyer either. Intake for the case took place last week, and it will now proceed to the fifth floor where parties in housing court either come to a resolution or go to trial.

Continuing through Nasab’s portfolio, there are three more eviction cases pending at 2849 Webb Ave. and one at 3460 Bailey Ave. In total, Nasab – who owns more than 40 buildings in the Bronx and once made the public advocate’s worst landlords list – has brought eviction suits against 11 households across these four buildings in Kingsbridge since May, and all but two households are representing themselves.

Around the corner, there are 13 active eviction filings at 2755-69 Sedgwick Ave., a pair of interconnected five-story buildings purchased together by an LLC in 2014 for just more than $14 million. Eight of them are proceeding through Bronx Housing Court with self-represented tenants. There are 104 units and 110 open HPD violations at this property.

Right to counsel was enshrined in the criminal court system 60 years ago with Gideon v. Wainwright, but the slogan is somewhat of a misnomer for what New York City’s Right to Counsel law accomplishes.

The statute obligates the city to provide tenants facing eviction access to a lawyer, but it doesn’t guarantee one, and carries no private right of action.

“This program is really brand new. We need to keep our eye on its long-term success,” Legal Services NYC’s Rassmussen said.

“This hasn’t been challenged,” he said. “I think tenants could make a good challenge if they show they tried to get a lawyer and didn’t get one. There may be arguments against individual judges or at the appeals level if there are cases that shouldn’t have been allowed to go forward.”

Lawyers at Legal Services NYC, which has built a team of about 50 lawyers contracted with the city’s office of civil justice to provide free representation to tenants in housing court, recount mounting pressure and steady attrition that has eaten into their practice over the past two years.

“The great resignation also affected us,” said Martha Kellogg, director of Legal Services NYC’s right to counsel unit. “We had some experienced folks move on, and their caseloads don’t disappear. They have to be transferred to other attorneys here. It’s hard to create a new relationship. It’s hard for the whole team to lose people.

“Housing court has picked up the pace tremendously. Some tenants have higher arrears and cases may be harder to resolve because there’s been this delay. It is a stressful time and the stakes are high. The consequence is eviction.”

Then and now ‘we
were sardines’

In March, the office of court administration ignored pleas from attorneys to slow the pace of proceedings, instead directing courts to usher cases through to resolution even when eligible tenants are denied free legal counsel.

Advocates with the NYC Right to Counsel Coalitison had warned of unprecedented caseloads in a letter to chief Judge Janet DiFiore weeks after the moratorium was lifted. Warrants of eviction began to trickle from housing court again this winter and spring.

A cost analysis by NYC Right to Counsel concluded that it would cost about $500 million to fully fund universal access to free legal counsel in city housing court, more than twice what the city has spent on the program the last two fiscal years.

“What they get is brief legal advice, which is no substitute for having legal counsel from the start of a case to finish,” said Pablo Estupiñan, a coordinator with NYC Right to Counsel. “There’s a paradox that the city is celebrating the success of right to counsel, and at the same time the courts are denying tenants this right. It’s a complete mess across the city. There is no consistency for what tenants can expect in housing court.”

Siya Hegde, who works in the civil action practice at Bronx Defenders, said lawyers were accustomed to chasing after tenants in the halls of the city’s housing courts, and continued to do so after the city began phasing in right to counsel.

The corridors were cacophonous, Hegde said, “I mean, we were sardines.

“Housing court shouldn’t just be a forum for eviction. That’s not the function it was designed to serve in the 1970’s when Bronx Housing Court came online. The point wasn’t to evict people. It was to provide an equal playing field, an equalizer for tenants to assert their grievances, and to provide mechanisms for landlords to address them. And so, when we think truly what the landscape has become…”