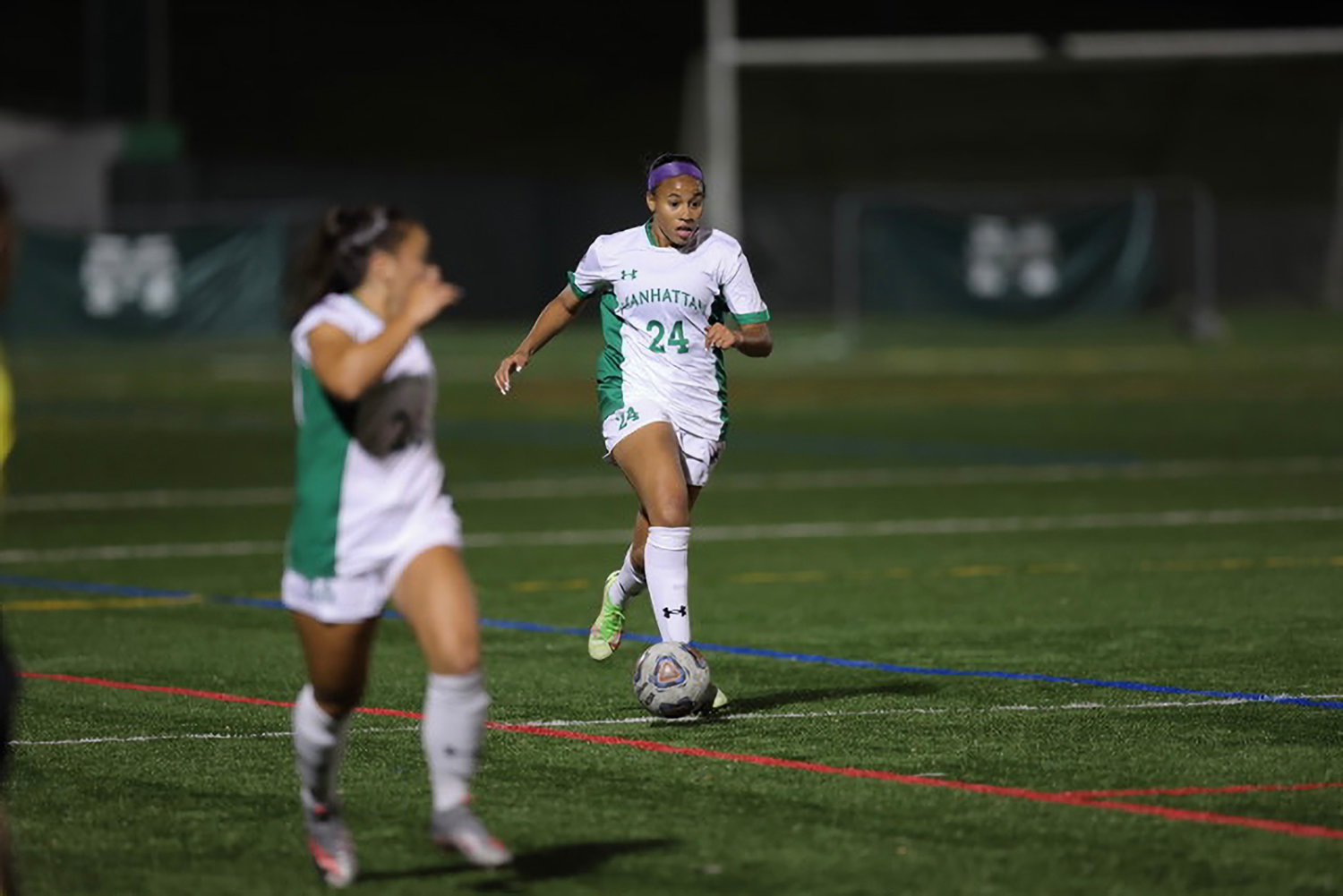 Ianah Mackey, a junior center back, wasn’t so sure what to do think about the new NaCAA no-ties rule. But one season into playing games with no overtime has changed her point of view.
Courtesy of Manhattan College athletics department

We have to fight to the very last minute — we know we are not getting that extra time to score.”
KAITLYN COOKE center back, women’s soccer team
By Anagelica Niedermeyer

The Manhattan College women’s soccer team wouldn’t have cared so much if the new rule began a year earlier. The Jaspers went 7-7-1 last season with a 1.13 record of goals per game and a 0.396 record of shots on goal, finishing ninth in the conference and just missing the eight-team playoffs. They lost three games in overtime.

“In previous years, we were actually upset that there was overtime,” said Ianah Mackey, junior center back. “A lot of the time we would have a tie and then we would end up getting scored on, so then we would lose the game.”

This past April, the NCAA Playing Rules Oversight Panel eliminated overtime in men’s and women’s soccer games this season for both the regular season and the postseason.  It stated: “This change will reduce playing volume for student-athletes in the regular season and place value on a tie. In addition, eliminating golden goal in postseason overtime will provide a more equitable playing experience for student-athletes.”

“If a game is tied after the regulation 90 minutes, it will end in a tie,” according to the NCAA website. “Previously, teams played two 10-minute overtime periods in a sudden-victory (golden goal) format, and if neither team scored, the game ended in a tie.”

“Honestly, I was happy about the news because being a senior the past three years we just did not have good luck when we would go into overtime,” said Kaitlyn Cooke, senior center back. “Overtime takes a lot out of you and could be an extra 30 minutes which is really tasking on your legs. So, I saw it as a good thing for our team.”

On the other hand, Cooke explains further that because a tie equals one point and a win is three points, sometimes it was worth the risk of overtime.

“A tie is nice because it is that one extra point instead of losing, but sometimes we do need that extra time if we need to have a win, like three points instead of one,” Cooke said.

Compared to last season, the team thinks the new rule could have helped them get to the playoffs, instead of losing in overtime.

“It’s like 50/50, sometimes it’s good and then sometimes it’s not,” said Reina Callahan, junior right back. “Last year, we lost a lot in overtime and getting rid of that could have had our games end in a tie.”

Even though some of the team thinks that last year the ties could have helped, there are also players who want overtime this season to score more points.

“As of now, we have had a lot of ties, so maybe if we did have that overtime we would have that 50 percent chance of winning,” said Mackey.

The team shares that their opinion on overtime depends on the team they are going against and how the game is going. This season, the games resulting in ties were against Siena, Mount Saint Mary’s, Stony Brook and Canisius.

“I just think it depends on where we are in the season and what we need out of each game,” said Cooke. “Say it is the last couple of games of the season and you need wins and at the end of a game you are tied. You want that extra time to try to score so you can get those three points, but other times all you need is a tie.”

With the lack of overtime, the dynamic of how the team plays in their games has also changed.

“When we go out there, we know we have to do what we need to do in those 90 minutes or it will strictly be a tie or a loss,” said Mackey.

Without the overtime allowance, the Jaspers have to make the very most of their games.

“We have to fight to the very last minute because we know we are not getting that extra time to score,” said Cooke.