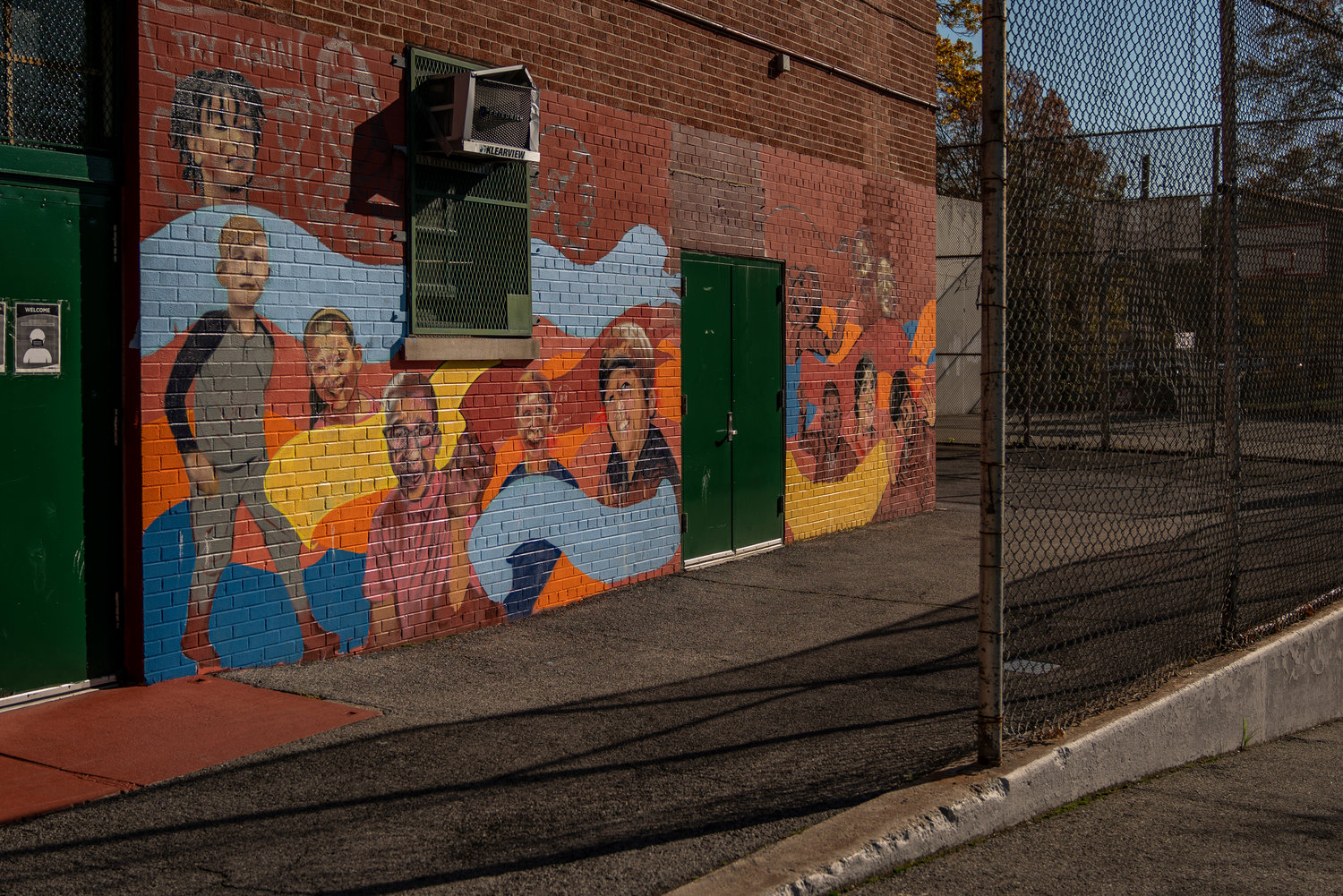 Nov. 5 marked the end of a two-week closure for P.S. 24 Spuyten Duyvil, allowing many students to return to the West 236th Street campus. The school initially closed for 24 hours following two positive coronavirus tests, but saw that closure expand to14 days as coronavirus cases start to jump up a bit citywide.
HIRAM ALEJANDRO DURÁN 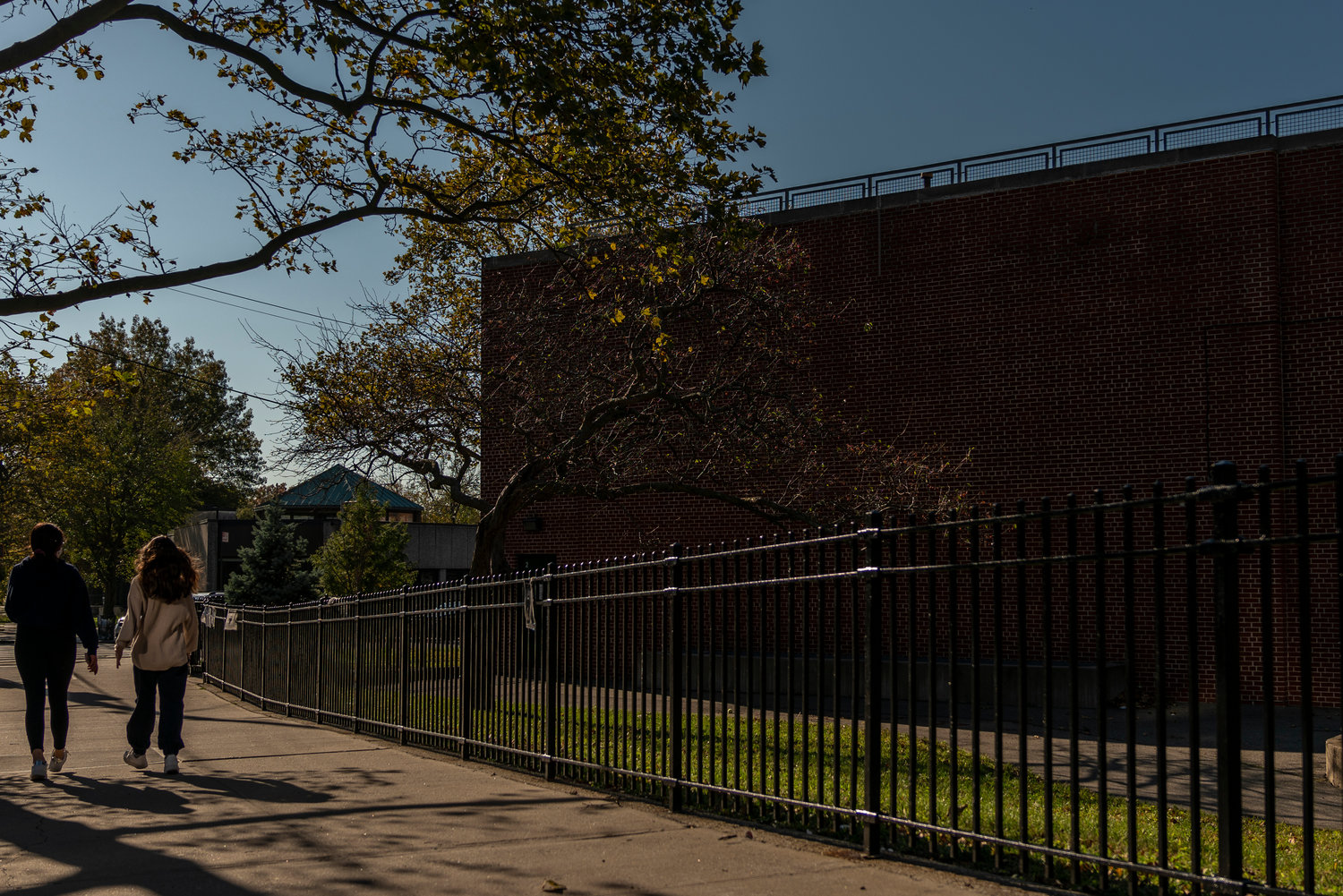 The past few weeks were particularly trying at P.S. 24 Spuyten Duyvil. Originally closed for 24 hours at the end of October, the West 236th Street school had to extend that closure for two weeks after two students tested positive for the virus that causes COVID-19. The school reopened Nov. 5.
HIRAM ALEJANDRO DURÁN 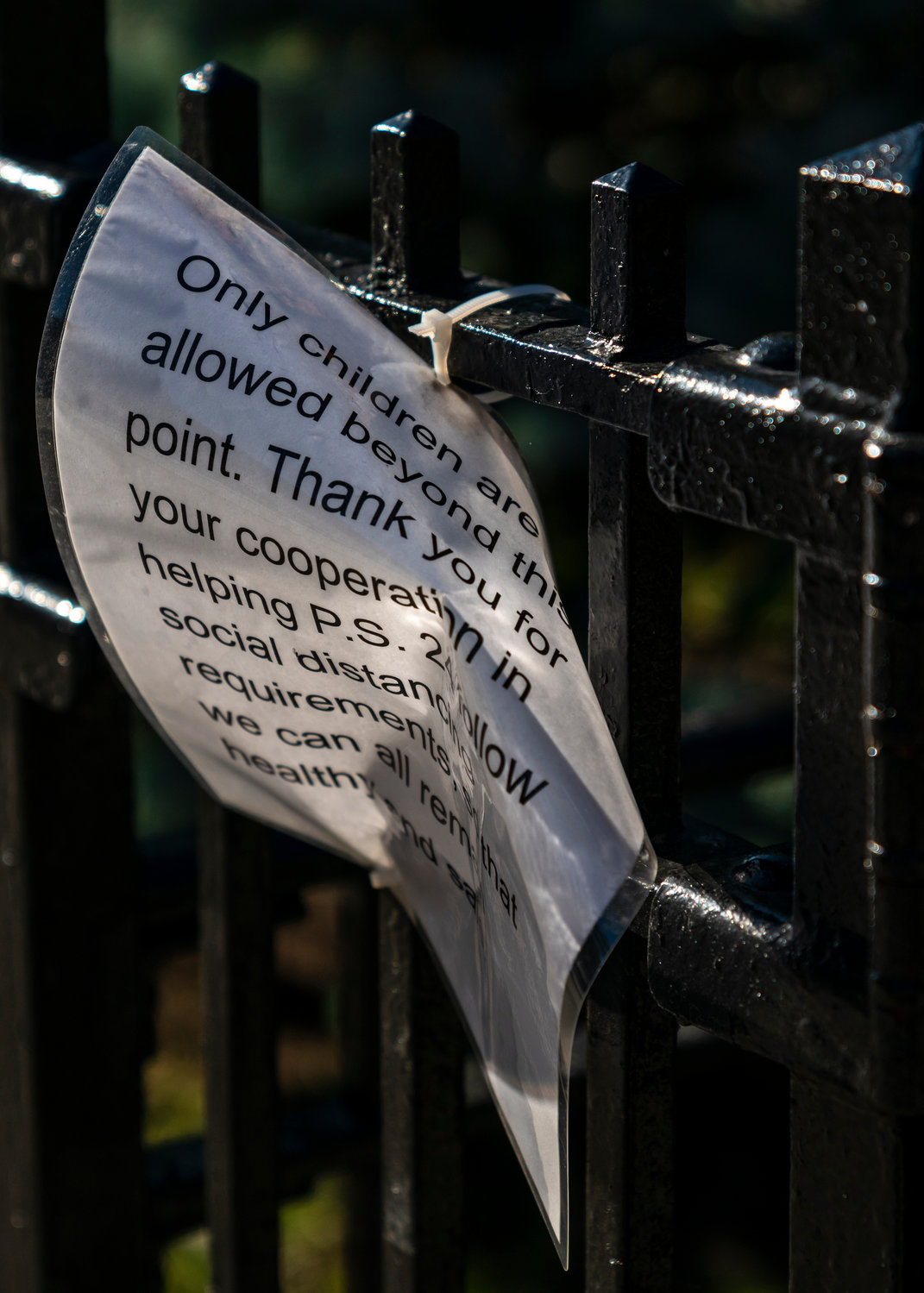 Social distancing signage around P.S. 24 Spuyten Duyvil is struggling to hold up the elements. After two students tested positive for the virus that causes COVID-19 last month, the school reverted to a fully remote structure for two weeks. The campus reopened Nov. 5.
HIRAM ALEJANDRO DURÁN 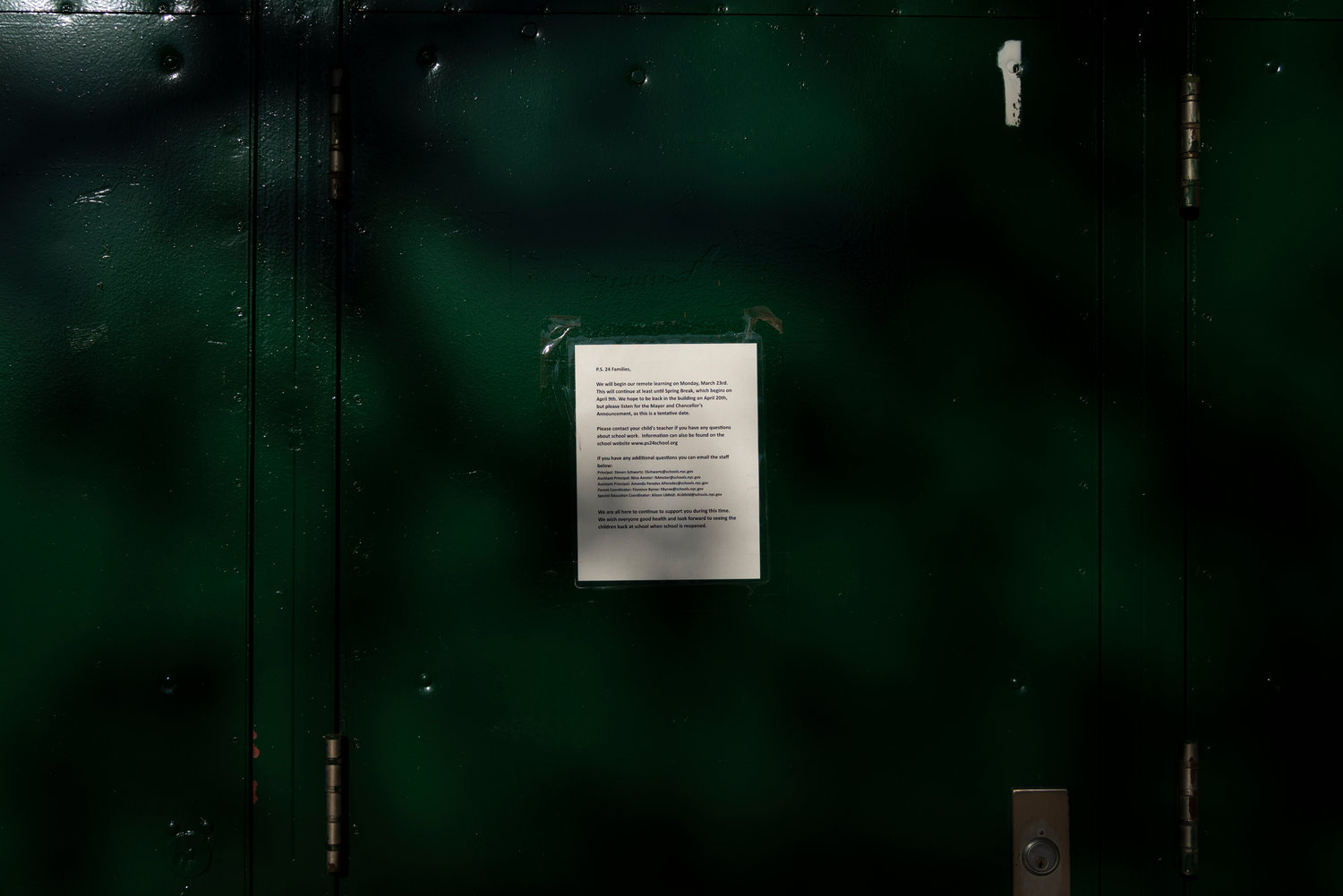 A dated sign on the door at P.S. 24 Spuyten Duyvil says they hope to have students back in class April 9 — a remnant of the beginning of the pandemic, when many hoped shutdowns would only last a few weeks, not months.
HIRAM ALEJANDRO DURÁN 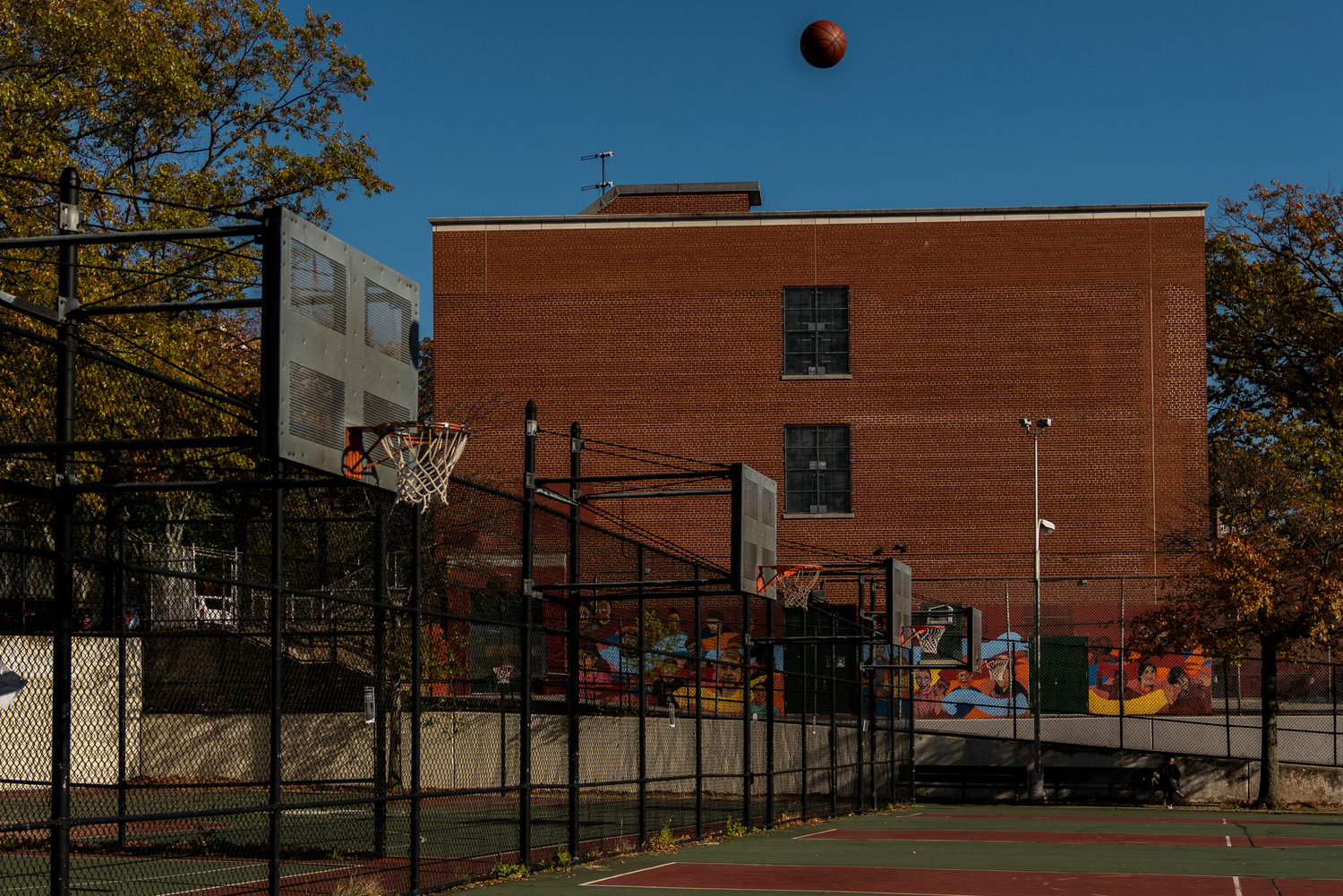 It hasn’t been an easy eight months for the city’s public schools, from completely remote to hybrid classes that included some time on physical campuses. But P.S. 24 Spuyten Duyvil dealt with another unexpected closure last month after two students tested positive for the virus that causes COVID-19.
HIRAM ALEJANDRO DURÁN 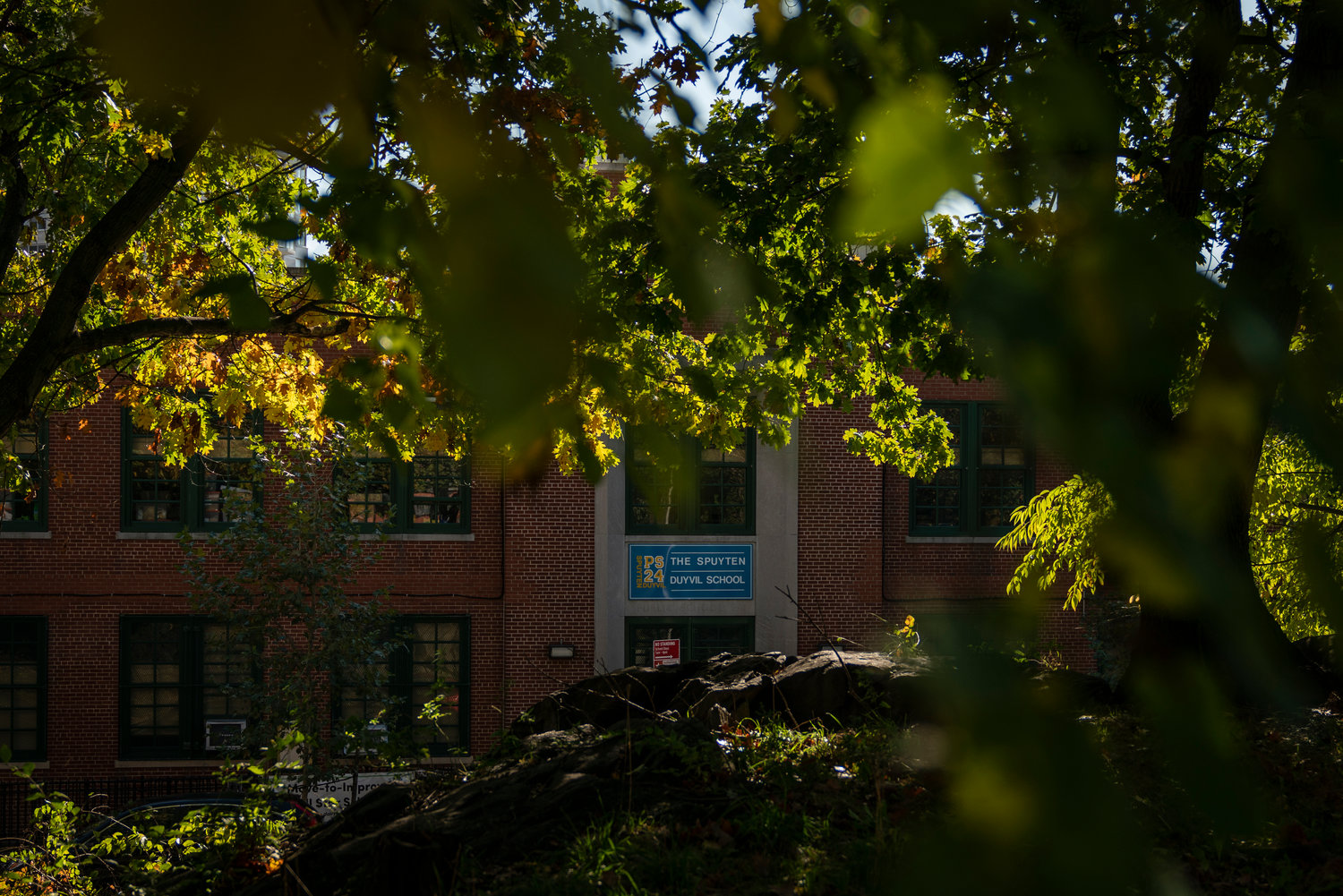 While a few other public schools in the area had some positive coronavirus tests here and there, P.S. 24 Spuyten Duyvil was the first to need to close for two weeks after a pair of students were infected. The school reopened Nov. 5.
HIRAM ALEJANDRO DURÁN
Previous Next
By ROSE BRENNAN

Between parent-teacher conferences and a tumultuous presidential election, last week certainly had enough excitement for for many city public schools. But at P.S. 24 Spuyten Duyvil, there was another cause of excitement: A return to the West 236th Street campus.

P.S. 24 closed its doors after a pair of students tested positive for the virus that causes COVID-19. Initially closed for 24 hours, the city’s health department quickly told principal Steven Schwartz the shutdown would need to be longer. Thus, the school closed for two weeks, with all classes shifting online.

In a world still reckoning with the coronavirus pandemic — and with cases slowly rising throughout the city — school closures aren’t unheard of, whether for a day or for two weeks. And while a closure at P.S. 24 might have been inevitable as the pandemic continues, Schwartz didn’t anticipate it being a reality so soon.

“We always have to be prepared for the unknown,” the principal said. “Unfortunately, my team and I were expecting something like this eventually, although we weren’t anticipating it happening at that moment.”

"Unfortunately, we’re used to this,” he said. “I think last spring prepared us for being able to very quickly ... transfer from a brick-and-mortar building to a virtual school. Although it’s something we really would not want to do again, it is something, unfortunately, we have some experience with."

In the days before and after that shutdown, communication with P.S. 24 parents was key. Once Schwartz received news about the two positive cases, the principal’s first order of business was to check in with the families affected. Thankfully, both students were asymptomatic. And armed with that information, Schwartz moved forward — with at least some good news at the front of his mind.

Schwartz then connected with rest of his teachers and support staff virtually to make sure everything was ready to ensure lessons were not interrupted even as all classes went remote. Healso maintained near-daily communication with parents, giving them updates about when students would return back to the physical campus.

The school was prepared for the possibility of returning fully to remote but that didn’t mean it was without challenges. Gemma James, mom to a P.S. 24 first grader, noted her child struggled away from campus — something she attributed to age.

"Having young children learning remote, I find (it) very difficult to keep your child focused and learning,” James said. “It’s very challenging to get them to do anything other than play games on their iPads."

But while children and teachers were moving forward in their classes — albeit online — Schwartz spent much of the remote period on the phone with the city’s health and education departments, as well as the testing and tracing corps that initially reported the positive cases.

When he wasn’t on the phone with city agencies, however, Schwartz would pop in on remote sessions to check on students and teachers. And he was encouraged by the strength he saw from the kids in the face of adversity — something apparent even through his computer screen.

"It really is amazing how, I think, our children are more resilient than the adults sometimes,” Schwartz said. “By all accounts, the kids are happy. The kids are just happy to be, even virtually, with their peers and with their teachers.

Schwartz had to wait for approvalfrom the education department to re-open Nov. 5. The news came by way of letter, something Schwartz said he was excited to share with the rest of the P.S. 24 community the night before, telling them, yes, school would reopen.

And for James and her son, it wasn’t a moment too soon.

"The feeling of dropping him on the school bus was a massive relief,” she said. “He was really excited."

Schwartz saw much of the same thing in the rest of the student body.

“It’s rare that you can see smiles through masks, but that was what was taking place” Thursday, Schwartz said. “I have learned from the past seven, eight months that instruction will always continue. We have an unbelievable staff, and our community is very supportive in making sure learning continues.”