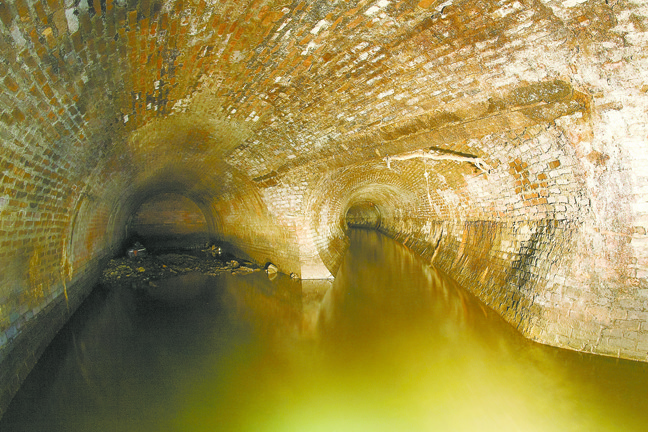 In the sewer running beneath Broadway, on the left, sewage flows in from homes and other sources. On the right, freshwater from Tibbetts Brook enters the channel.
Photo by Steve Duncan
By Isabel Angell

Several years ago, urban explorer and historian Steve Duncan climbed underneath Van Cortlandt Lake. He was there to explore Tibbetts Brook, which comes through the park from Yonkers and then disappears into the city’s sewer system via the south end of the lake.

Before Jacobus Van Cortlandt dammed the brook for his sawmill in the 17th century, and before the city diverted it underground, Tibbetts Brook flowed all the way to the now-buried Spuyten Duyvil Creek. But that water still runs today — through a sewer, straight to the Wards Island Wastewater Treatment Plant.

“When I realized that prehistoric streams still exist, are still flowing through the sewer tunnels, I got hooked,” Mr. Duncan said of his underground urban exploring.

Seeing the city from its subterranean tunnels can reveal the city’s history and show how city planning has changed throughout the years.

“Sometimes an attempt to manage the environment leads to calamity,” Mr. Duncan said.

In doing so, the city created a system in which 2 billion of gallons of clean water pour from Tibbetts Brook into the sewer per year, according to the city’s Department of Environmental Protection (DEP). While that is problematic at any time — overtaxing the water treatment facilities, draining away water that could be used for other purposes like landscaping — during times of heavy rain, it can create a health hazard.

As rainwater flows into the sewer system through storm drains and creeks like Tibbetts, the runoff combines with raw sewage. If the volume swells past the tunnels’ capacities, the putrid mixture pours into the rivers. The overflow point for the Broadway sewer tunnel, which carries the water from Tibbetts Brook, is the largest by volume in the Harlem River.