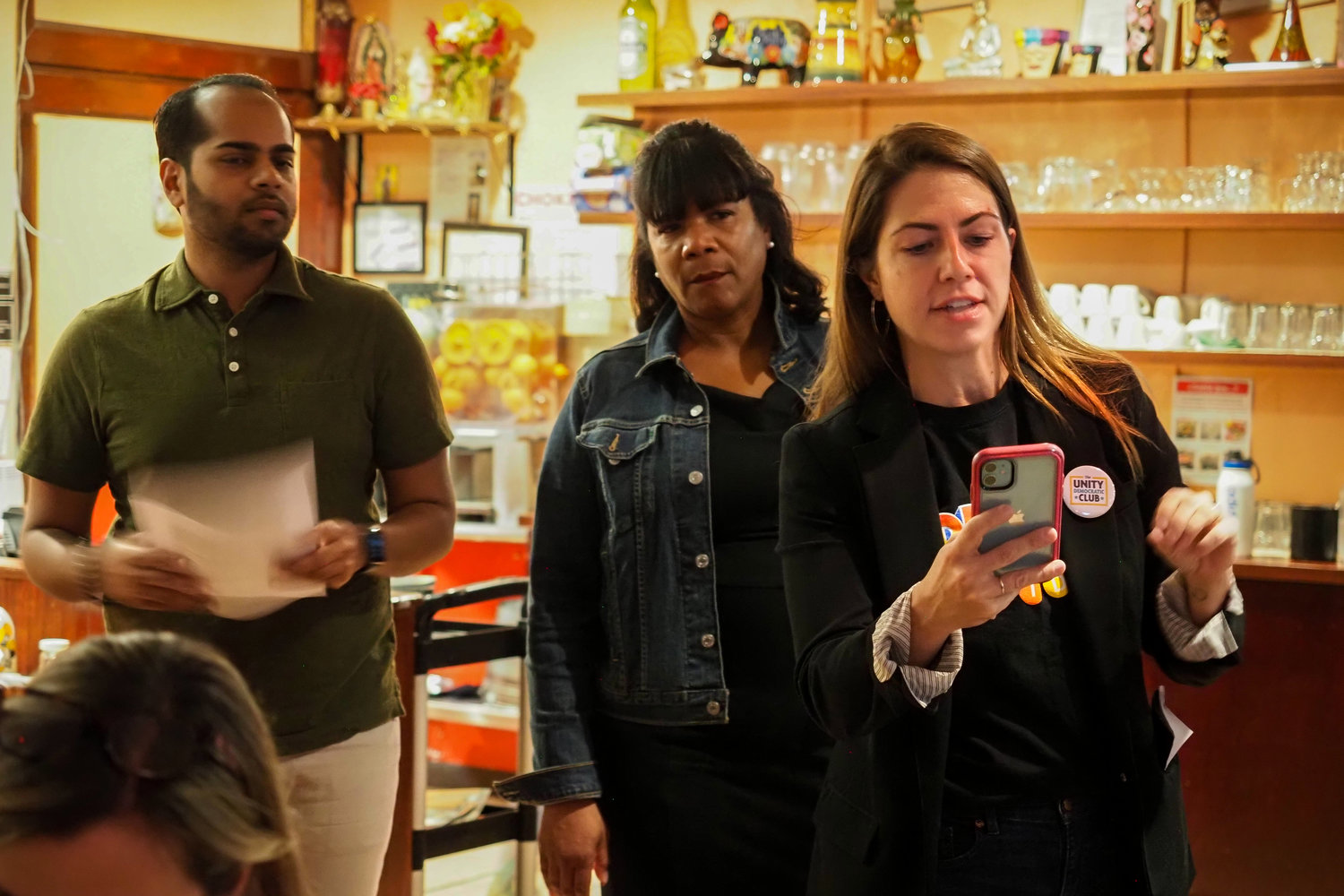 Ramdat Singh, Danielle Guggenheim and Abigail Martin all gave speeches at the Unity Democratic Club’s first meeting in late October. There the club ratified its bylaws, which welcomes any registered Democrat with an interest in the northwest Bronx.
Courtesy of Saul Mackler
By Sachi McClendon

With just one meeting under its belt, the northwest Bronx’s newest political club is already getting a crash course in greater Riverdale democracy after nixing a policy that could have excluded registered Democrats in the area.

At its first meeting on Oct. 27, the Unity Democratic club’s members ratified its bylaws, which do not preclude a Democrat from being a member of both the Unity club and the Benjamin Franklin Reform Democratic Club, the most influential political club in the northwest Bronx.

“To be eligible to be a member of the Unity Democratic Club one shall be a registered Democrat who has an interest in the northwest Bronx,” the bylaws read.

That is a marked change from what the acting president of the Unity Club told those in attendance at the club’s launch event earlier in October. “You can only be a member of one club in the northwest Bronx,” said Betsey Knapp.

“We don’t want them to flood our club,” she told The Riverdale Press shortly after the evening’s speeches. “They are not open. People felt like they could not join.”

When asked for clarification later on, district leader Ramdat Singh, who is a part of the Unity Club, said that this non-compete policy was being considered, but that nothing would be determined until the bylaws were ratified.

In response to The Press, a spokesperson for the club said that the executive committee debated over that clause in the days after the launch event, and decided to do away with it.

“The first meeting that (The Press) attended was of the Unity Coalition, and the bylaws were then in draft form. When the Unity Democratic Club launched, the executive committee debated and refined the draft,” the spokesperson wrote in an email. “It made several changes (not just to that clause).

“The membership adopted the final bylaws as agreed to by the executive committee by unanimous acclamation on Thursday.”

By getting rid of that clause, the club could have averted further exacerbating tensions with the Ben Franklin Club. After hearing about the Unity club’s potential policy, Ben Franklin president Virginia Krompinger emphasized that to be a member of her group, you only need to be a registered Democrat and pay a “modest” fee.

“If another group would exclude people based on membership in other Democratic clubs or our club in particular, it seems counter to Democratic principles,” she previously said in a statement. The Ben Franklin Club has prided itself on including people in its meetings, even those who have actively worked against the club and the club’s endorsed candidates in the past.”

“I hope this policy stated by its acting president is overruled. Maybe your Oct. 6 story will shame them to truly support Democratic unity by keeping their doors open,” Krompinger wrote in letter to the editor in The Press days after the Unity club’s launch event.

Following the rule reversal, Krompinger said that “it is clear the Unity Club backed off of its policy of excluding (Ben Franklin Club) members after I pointed out publicly that this practice would be exclusionary, the antithesis of ‘Unity.’ As its founders had unsuccessfully tried to take over the Ben Franklin Club in the past, it’s not surprising that they feared we would behave in a similar fashion. We have no interest in engaging in these petty tactics.”