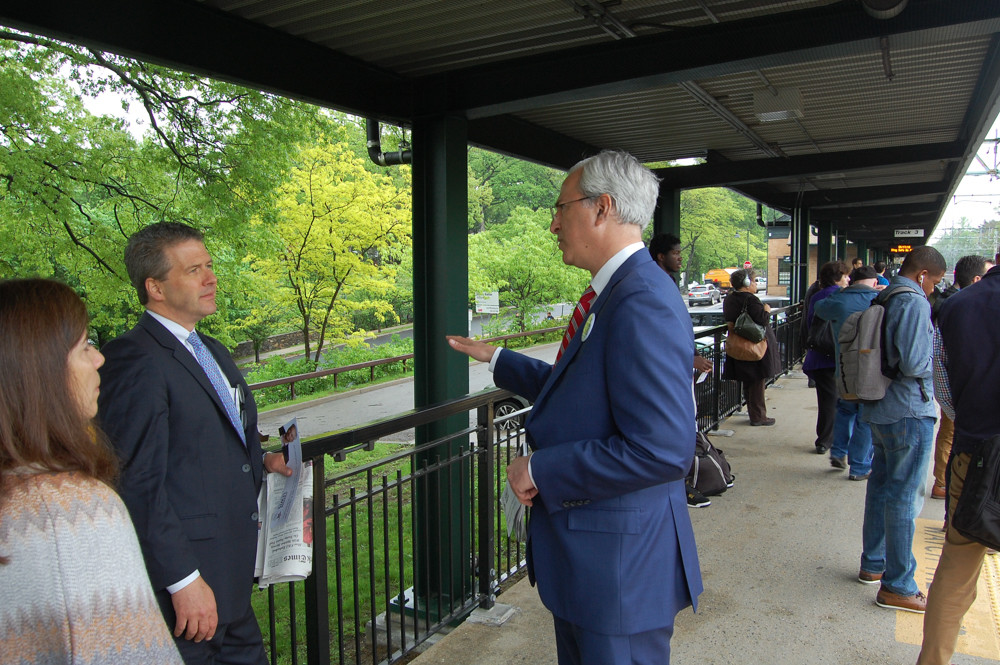 Jonathan Lewis speaks with residents at the Pelham Metro-North station in his campaign as a Democratic primary challenger to U.S. Rep. Eliot Engel for his 16th congressional district seat. Lewis claims Engel is in the pocket of political action committees tied to big pharma and sugar.
Courtesy of Randall Whitestone 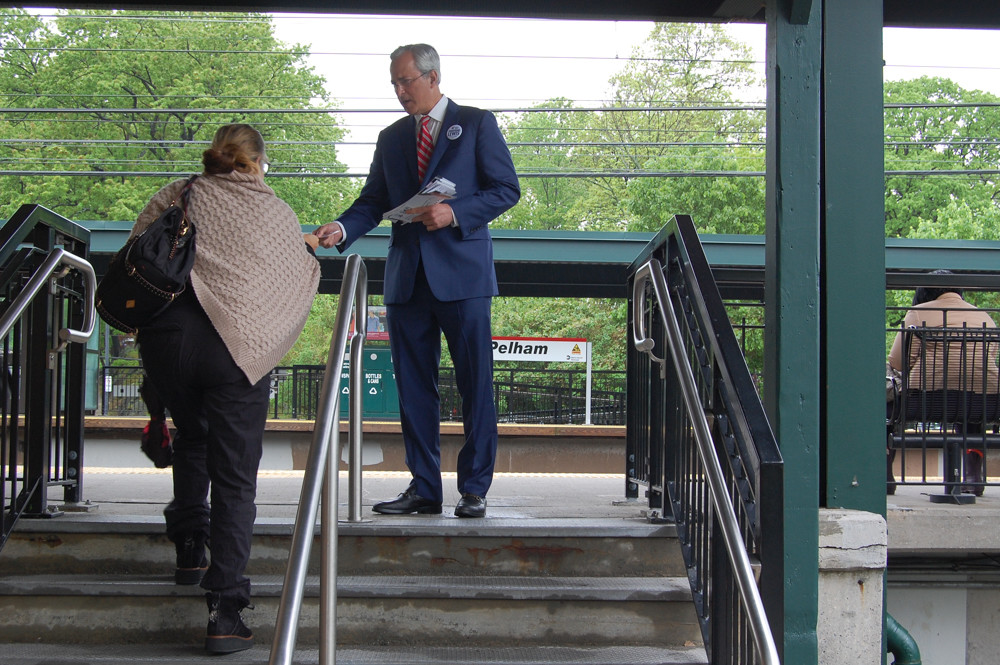 Jonathan Lewis campaigns at the Metro-North station in Pelham as he challenges U.S. Rep. Eliot Engel for his seat in New York’s 16th congressional district. Lewis claims Engel’s voice has been silenced by political action committees that have helped finance his campaign.
Courtesy of Randall Whitestone 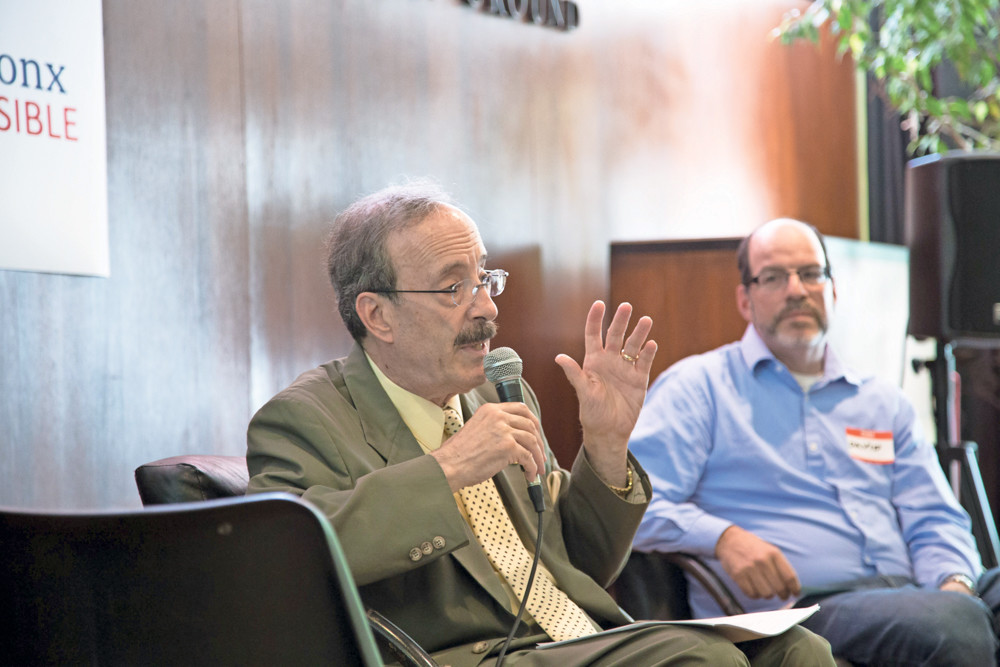 U.S. Rep. Eliot Engel speaks at an event cohosted by the Northwest Bronx Indivisible group last year. Engel now faces a challenge ahead of the June 26 primary from Jonathan Lewis, who’s leveled a slate of charges against the entrenched incumbent, including that political action committees tied to the sugar industry have silenced the congressman’s voice on issues like skyrocketing insulin prices.
EIAN KANTOR / File 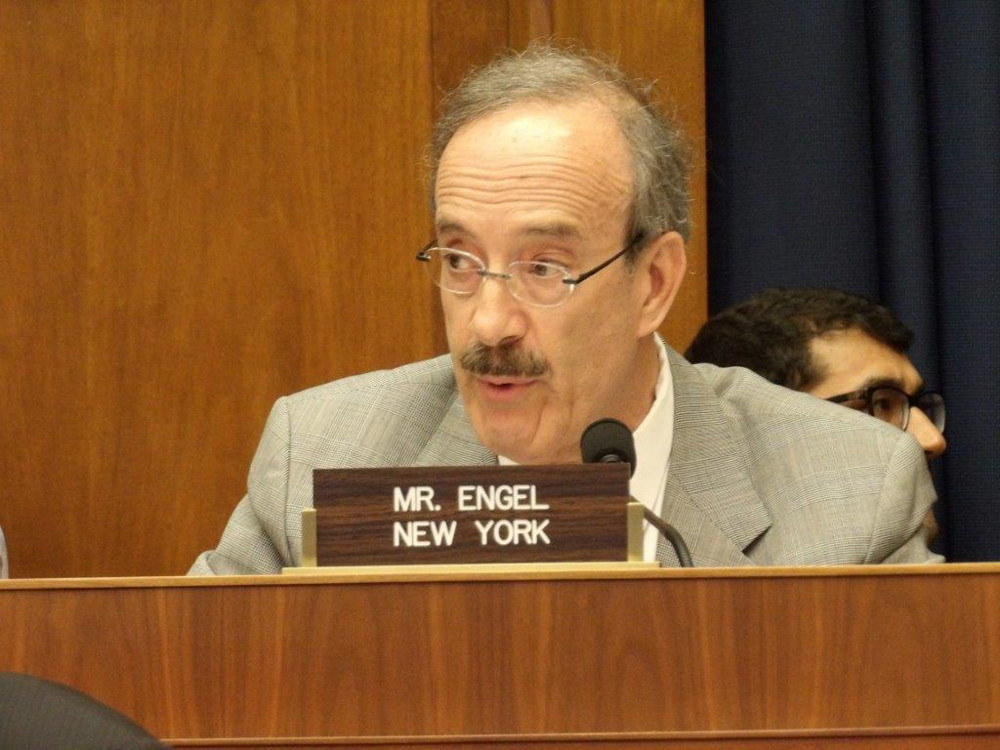 U.S. Rep. Eliot Engel speaks at the Energy and Commerce Committee in Washington last week. Engel faces a challenge in the June 26 Democratic primary from Jonathan Lewis, whose campaign literature levels a host of weighty accusations against Engel that left some voters seeking answers from both candidates.
Courtesy of Zach Grossman
Previous Next
By ZAK KOSTRO

Challenging U.S. Rep. Eliot Engel for his long-held seat in New York’s 16th congressional district for the June 26 primary, Lewis has let fly a slate of charges against the veteran lawmaker that have some voters demanding answers — from both candidates.

Vivian Oleen — a registered Democrat, and Riverdale resident since the 1970s — said she’s deeply concerned by Lewis’ campaign literature in which he levies a bevy of accusations against Engel, like he’s in the pocket of political action committees representing big pharma and the sugar industry while failing to fight for constituents suffering from diabetes who struggle to afford the skyrocketing cost of insulin.

But, Lewis said, there’s a reason behind his attack.

“Before our very eyes, we’re going from a democracy toward an oligopoly, toward something much worse,” Lewis said. “I think the voice of the people is being overwhelmed by the voice of corporations, and PAC money, and in point of fact, it’s widespread. It’s throughout the United States Congress.”

The biggest immediate threat, as Lewis sees it, is Trump. But successfully reversing the insidious effects of the president’s policies demands “we, as a Democratic Party, have to take on President Trump with a pure heart. And we ourselves have to clean up our own party if we’re going to clean up Washington.”

“Their voices have been silenced on important issues,” Lewis said. “That needs to change, and I want to be that change agent.”

That starts with taking on established incumbents like Engel.

“There has not been a meaningful challenge to Congressman Engel in many, many years,” Lewis said. “How can we be a democracy when we don’t have competition in our primaries? When we have people who are re-elected year after year without any debate?”

Lewis maintains he can back up his claims against Engel, not just with PACs, but in other areas like his attendance record. Engel missed 1,355 votes over his career — or 7.2 percent of all votes taken during his tenure — which Lewis says is substantially worse than the median 2.3 percent lifetime scores of current representatives as compiled by GovTrack.us.

Engel also has taken more than $5 million in PAC money, according to Lewis, pointing to data on OpenSecrets.org.

“It’s not necessarily that in all cases the PACs lead (Engel) to vote in their interest,” Lewis said. “It’s equally, if not more, important that he’s silent on many important issues of our time.”

One of those is diabetes, something close to Lewis as two of his children suffer from the disease.

Engel, however, didn’t flinch at Lewis’ charges against him.

“They’re obviously false,” Engel said. “I have been a congressman now for a long time. I have won each race because I have worked hard for the people for many, many years.

“When you don’t have a record, and you’re a millionaire who can afford to put a million dollars of your own money into the race, and your campaign advisers are telling you that the way to make some headway is to attack your opponent — that’s what he’s doing.”

But the $500,000 of his own money Lewis has dropped on his own campaign? “That’s exactly the point.”

“The current system forces candidates to self-finance if they don’t want to be bought by PACs,” Lewis said. “But in addition, I have been incredibly gratified by numerous individual donations from people who believe the system is broken and needs to be fixed. I refuse to accept PAC money, and believe in campaign finance reform, including federal financing of elections and spending limits.”

But does Engel agree? Lewis wants to know.

Engel introduced a Constitutional amendment that would establish “comprehensive” voting rights he believes will address problems of disenfranchisement and low voter participation. And, among other things, would give Congress the power to regulate campaign expenditures and activities from private parties, while outlawing foreign interference.

For his part, Engel doubts Lewis’ aggressive tactics will work.

“Tell the thousands of people that I’ve helped in my district office in Riverdale, right on Johnson Avenue, that I haven’t done anything for them,” Engel said. “I didn’t know Mr. Lewis existed. He came out of left field somewhere. But I won’t let him tear me down. I’ve always run on my record, and I’ve always won.”

Nor will voters buy into Lewis’ charges, Engel said.

“Frankly, I just think the voters are too smart for him,” Engel said, which is why he’s “trying to keep the campaign positive. I really don’t want to get into the mud with him.”

Yet, a challenger sniping at an entrenched incumbent comes as no surprise to Robert Erikson, a political science professor at Columbia University. Lewis, he said, might have a hard time getting his voice heard among “an urban constituency, where, maybe, I would guess, The Riverdale Press could be regarded as an important media source.”

Erikson also pointed to the Democratic primary feuds in Pennsylvania in recent weeks, but those, he said, involved open seats or challengers to GOP representatives.

Having voted for Engel in the past, Oleen wonders whether there’d be any advantage voting for “an unknown quantity” like Lewis. Worse, she fears her district could be shortchanged should a freshman representative lacking Engel’s seniority and influence take over.

And based on everything Lewis has said thus far, Oleen’s not convinced he’d be better for Riverdale, or other parts of the Bronx.

“Engel has name recognition and a history of getting results for the district, and people are grateful,” Oleen said. “And Lewis? What’s he done for me lately?”