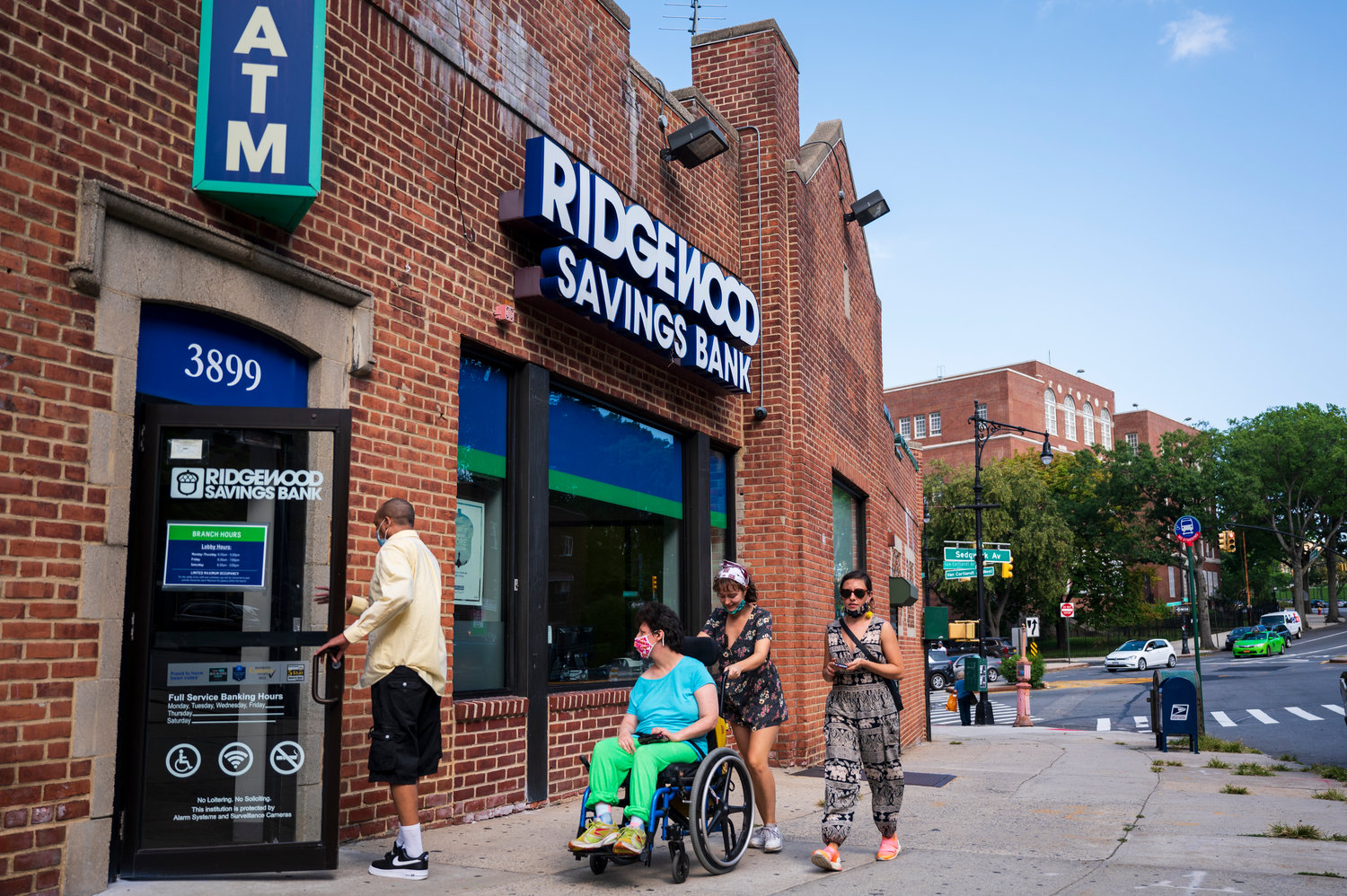 Until a couple of weeks ago, it looked as if Ridgewood Savings Bank in Van Cortlandt Village would be just the latest local financial institution to shutter. But thanks to an effort led by Community Board 8 and others, Ridgewood renewed its lease to keep its 3899 Sedgwick Ave., branch open.
HIRAM ALEJANDRO DURÃN
By ETHAN STARK-MILLER

Memories are still raw for some over the closing earlier this year of a Chase Bank branch in Knolls Crescent — a move that drew fierce protests from neighbors there, many who are senior citizens and depend on bricks-and-mortar institutions instead of using the internet or a smartphone.

Those efforts were unsuccessful, but it looks like there’s a much happier ending in Van Cortlandt Village after the Ridgewood Savings Bank there announced it has reversed a previous decision it would close next month, and instead renewed its Sedgwick Avenue lease.

Knolls Crescent neighbors argued they needed their branch open because it was the only financial institution serving the geographically isolated area. Those living near the Jerome Park Reservoir shared similar sentiments, saying their closest banks would be as far away as Broadway or even Norwood.

It looked like history was doomed to repeat itself for Van Cortlandt Village. But being part of a smaller regional bank chain — and not the massive billion-dollar JPMorgan Chase conglomerate — had significant advantages for Ridgewood, opening the door for groups like Community Board 8, the Van Cortlandt Jewish Center across the street, and even Assemblyman Jeffrey Dinowitz to find the resources that would allow the bank to stay.

“This went on all summer,” said Nick Fazio, chair of CB8’s economic development committee. “This was all I did, so I can’t tell you how relieved I feel that we got this. It was a long process. We got a lot of help from a lot of people. And yeah, we got the branch to stay open.”

Keeping it open meant finding some financial help from the state. New York’s banking development district program, according to the department’s website, is designed to encourage the establishment of bank branches in areas where there is a “demonstrated need for banking services.”

Banks that join the program are eligible for public subsidies and other benefits intended to persuade financial institutions to open — and stay — in underbanked areas.

When it announced its closing last May, the Queens-based chain said it was centralizing this branch and another one in Norwood into a new single location on East 204th Street. Ridgewood’s market share in Van Cortlandt Village was so low, Fazio said, bank executives figured its customers there would simply travel the mile or so on the other side of the reservoir to Norwood instead.

Those executives were wrong, Fazio added. The community was most certainly not on board with this plan.

Soon after Ridgewood announced the closure, Fazio said, CB8 sent a few of its members who live in the area — Julia Gomez, Ed Green and Sergio Villaverde — to go door-to-door and find out what the sentiment of their neighbors was.

“And the response was, ‘We really need you to try to keep the bank open,’” Fazio said.

Additionally, the unofficial CB8 survey crew found out that the area had a large senior citizen population thanks to some census data.

Domenico Ciacco — Ridgewood’s community reinvestment officer — admits he also received a lot of negative feedback from local organizations about how closing the branch would be harmful to the community, citing its geographic isolation from Norwood and other banks.

“There’s not a lot of banks around there,” Ciacco said. “And especially for the small businesses that do deposits in cash, it would have been really hard for them to continue their day-to-day banking without having Ridgewood Savings Bank in the location that we’re at. Luckily, I work for a community bank that allows me to voice the community’s concerns, and really try to brainstorm on ideas to keep financial institution or ATM availability for the community.”

Two other Ridgewood branches elsewhere are in banking development district-designated areas, Ciacco said, so this program might ultimately help other neighborhoods, too.

But the application process isn’t easy, Fazio said. So, he and Ciacco spent the last few months coordinating with the borough president’s office, the Bronx Overall Development Corp., and others to help get the extensive materials together.

“There was a ton of information that they wanted in that application,” Fazio said. “All kinds of demographic information, quantitative data. Some of it that we had, but it wasn’t necessarily configured the way that (financial services) wanted it. So, we leaned on a lot of our community partners for help.”

This experience was very different from the Knolls Crescent Chase Bank, Fazio said, because Ridgewood actually seems to care about the communities they serve. Along that theme, Ridgewood has made it clear it wants to continue with outreach and be more active in the neighborhood.

“We’re more than happy to partner with them because they were just so tremendous throughout this process,” Fazio said. “I really hope that the community supports them for the effort that they put in, which was a different experience from what we experienced in the past with bank closures.”