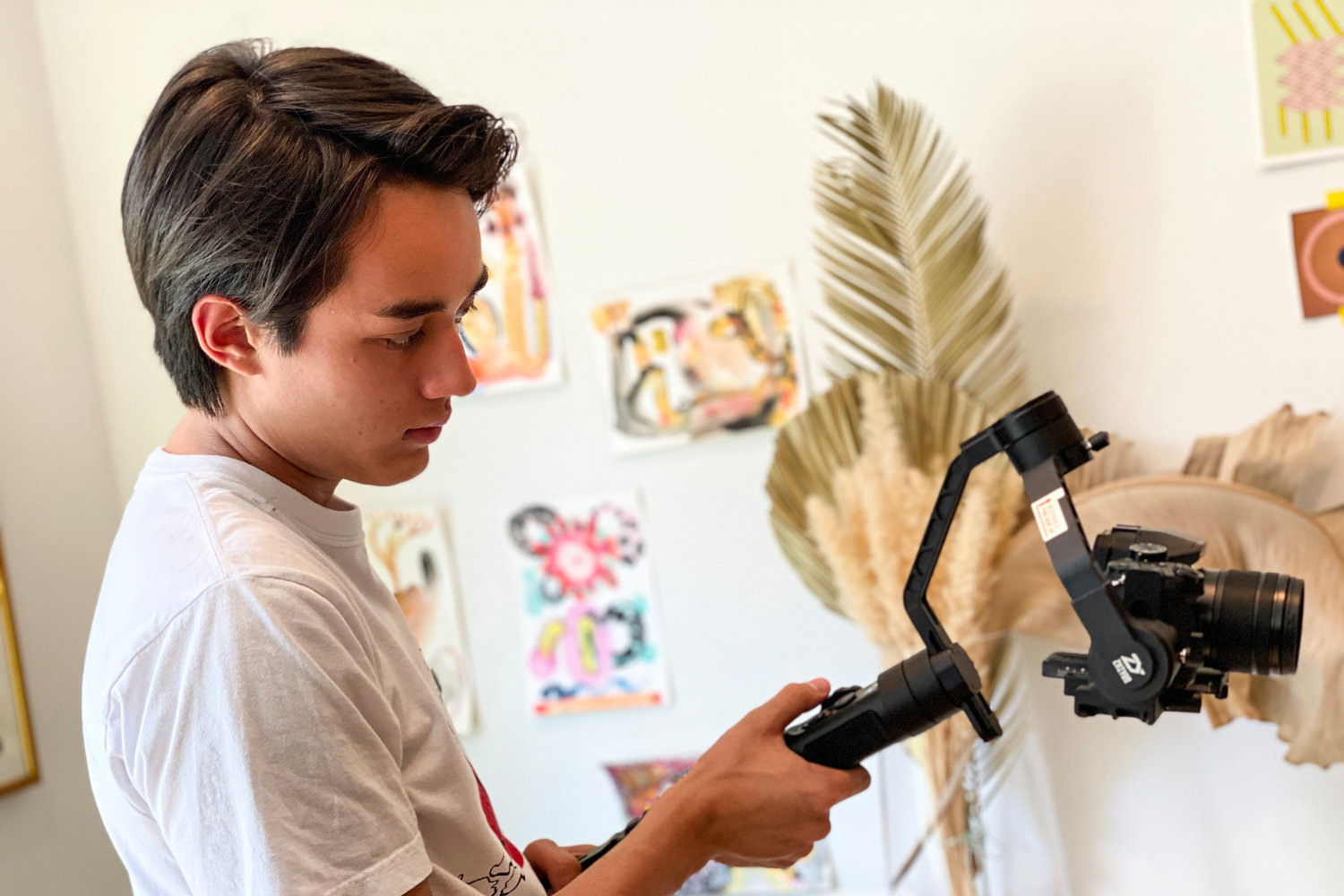 All throughout his years at Riverdale/Kingsbridge Academy, Jackson Van Horn can’t resist being behind the camera, creating new short films for his friends and family to enjoy. Now he’s taking it to the next level, heading to the University of Southern California’s School of Cinematic Arts in Los Angeles.
Courtesy of Jackson Van Horn

We are seeing more people of color ending up in front of the camera, so that’s getting better. But it’s behind the camera that’s been a problem.”
Jackson Van Horn
By MICHAEL HINMAN

When Jackson Van Horn presented his film work to his classmates at Riverdale/Kingsbridge Academy for the first time, he got a response that made the then-eighth-grader feel all of his work putting the project together was worth it.

“I think the audience liked it, because they did clap,” Van Horn told The Riverdale Press back in 2017.

“I just hope that I taught the audience more about this issue.”

That issue was using social media to post inappropriate pictures online, and how doing so could close doors to someone’s future. “Footprints” featured a main character the audience never sees, and Van Horn’s parents as school administrators — rejecting him entry into his next school because a picture was published showing him drinking alcohol.

The students liked it, as did teachers at RKA, awarding Van Horn a trophy and $50.

Van Horn took that lesson to heart, and there were no pictures costing him his future. In fact, as the teenager gets set to graduate from RKA in just a few weeks, he’s ready for that next big step. He’s moving to Hollywood — to go to film school.

But not just any film school. Instead, it’s one of the country’s best. It’s the University of Southern California’s School of Cinematic Arts in Los Angeles. Its alums are a who’s who of filmmaking from Shonda Rhimes to Judd Apatow, from George Lucas to Robert Zemeckis.

The campus is practically a film studio, and Van Horn — who continued to create short movies all through his high school years — can’t wait to make USC his new home.

“It’s definitely a confidence boost getting into this school,” he said, “but I’ll say this. The race is never over. I’m going to have to be proving myself to professors and, someday, employers, and there are certainly some nerves that come with that.”

Coming of age behind the camera

His film shorts range from the funny — like the videogame rivalry of “Fortnite Feud” — to the poignant, like “Sofia,” taking us on the journey of a young woman discovering who she is. Lately, he’s been working on a documentary — a project he’s partnered with Riverdale Neighborhood House and Ghetto Film School to complete focused on a small Asian-led textile business here in the city, and why it’s important to get back to community.

In fact, it’s community that Van Horn hopes to find in Hollywood — where competition is friendly, and in the end, where filmmakers simply want to make the world a better place. And Van Horn is excited because that community isn’t just about people who have access to expensive film equipment, but one today where anyone with a smartphone could become the next Steven Spielberg.

“The fact that anyone in the world is able to make a film, I think that’s great,” Van Horn said. “We’re really going to start seeing that when Gen Z enters the industry, there will be a more economically diverse range of filmmakers, and more racially diverse filmmakers as well.”

Diversity is important to Van Horn, to the point where he’s made it an essential part of his filmmaking work, right back to the very first frames he completed. A 2020 survey conducted by UCLA found that just 1-in-10 film directors are people of color, and fewer still identify as LGBTQ.

Because of that, Van Horn created his own equity and sustainability plan, committing by next year to ensuring at least a third of his film crew positions — and key film crew positions — are women, people of color, and LGBTQ. That a quarter of characters represent those communities, and that any film tackling themes related to race, sexuality or gender, that at least a quarter of key positions on his productions will include representatives of those affected by such themes.

“We are seeing more people of color ending up in front of the camera, so that’s getting better. But it’s behind the camera that’s been a problem,” Van Horn said. “Especially when you get up to the more executive levels. You rarely find anyone of color or anyone LGBT up there.”

But those who are trying to break down those barriers are working hard at it, and should be recognized, Van Horn added. People like YouTuber-turned-filmmaker Issa Rae from HBO’s “Insecure,” or “American Horror Story” and “Pose” co-creator Ryan Murphy.

“Murphy’s shows were ones that, for the first time, showcased a diverse range of stories and actors, including some you saw for the first time who weren’t being used for comedic effect,” Van Horn said. “You had characters who were trans, those bringing representation to actors with mental or physical disabilities, in a way that’s uplifting and treating them like the human beings they are.”

And then there’s the sustainability aspect to what Van Horn plans to incorporate in his future production work. Reusing costumes and set décor, donating unused food to the homeless or community fridges, and only allowing product placement or endorsement of companies that have clear ethical practices and positive outlooks toward Black, Indigenous and people of color, as well as the LGBTQ community.

Working from a solid foundation

Many don’t get the support they need to stay on the right path for the future, but Van Horn says he’s lucky because his parents have backed him every step of the way. And they’re no stranger to what their son plans to do next anyway. His father, Tom Van Horn, is a stand-up comedian and writer. His mom, Lynn Van Horn, is an executive assistant who is sad to see her son move cross-country — but certainly not sad about where he’s ending up.

“She’s a Trojan,” he said. “She didn’t go through film school, but she’s a USC alum, and she’s worked in the entertainment industry. My dad? He’s still shocked. I asked him just the other day how he felt about all this, and he said he still can’t believe I’m going there.”

But the first lesson any budding film student learns before they even arrive on campus is that even with a strong family, solid values, great skill and a good education — there are no guarantees in life, and there’s certainly no promises when it comes to Hollywood. Only a handful find success, and even fewer become household names.

Not in the slightest.

“I’m keeping an open mind, because I know none of that is easy,” Van Horn said. “I’ve talked to enough people in the industry to know what it’s like, and I’m prepared for anything.”

Still, there’s a reason why Hollywood is often described as “magical,” and Van Horn can’t wait to be a part of it.

“I would love to pursue creative producing after college, being sort of the wrangler that brings all the creative forces into a creative project,” he said.

“And, yeah, I’m looking at directing as a profession. I really enjoy telling stories, and whether I do that as a writer or as a director or as a producer, I would be happy that I am doing it.