The varieties of crocus experience 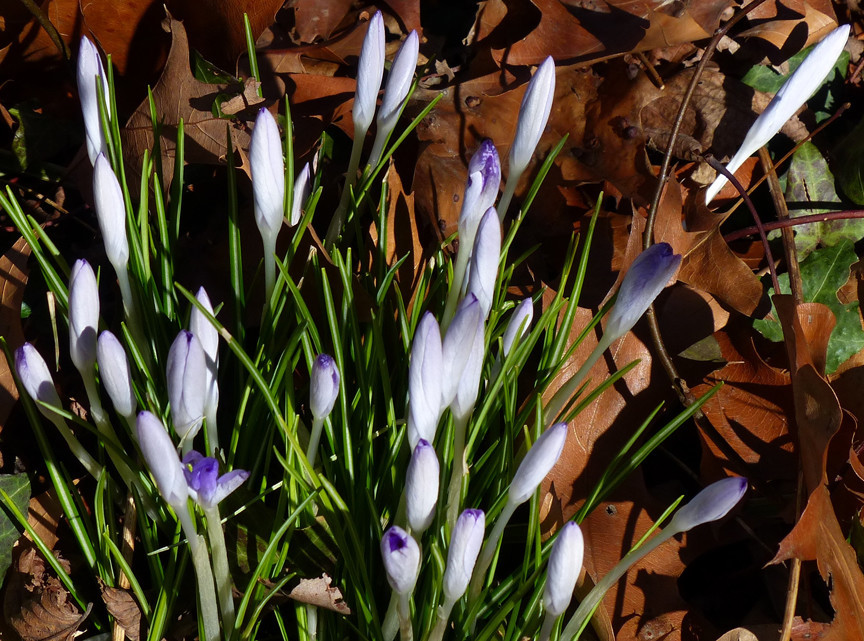 Crocuses are the iconic spring flower. Although we see the tips of the daffodils long before the end of winter, the first flower to spring up is the colorful, cheerful crocus that opens in the bright sunlight and closes again as the sun moves towards the horizon, only to reopen the next day. That crocus, known scientifically as Crocus vernus, comes in white, purple and yellow and is a delight when planted in masses, particularly on sloping hills. The fact that crocus is synonymous with glee, youthfulness and cheerfulness is probably not a surprise when you learn that vernus is the Latin word for youthful and was once a boy’s name. The term crocus comes from crocatus, which is a Latin adjective for saffron yellow.

However, our delightful spring crocus, which is planted in the fall, is not the source of the very expensive spice we call saffron, which is used extensively in various cuisines including Spanish, French and Persian. That plant is, however, a relative of Crocus vernus named Crocus sativus  — sativus is Latin for cultivated — and while it, too, is planted in the fall, it will not bloom until the following autumn. The sativus suffix used as the species designation may refer to the fact that this plant is sterile in the same way that the mule, which is a offspring of a horse and a donkey, is sterile and so Crocus sativus depends on human intervention for vegetative propagation. This is accomplished by digging up the corms — a part of the stem that grows underground and is reinforced with fibrous threads — which are not to be confused with bulbs, which are layered structures — and removing and planting the baby corms for a new crop of vigorous plants the next year.

Saffron is one of the world’s oldest and most expensive spices. The spice itself comes from the three blood-red stigmas in the center of the flower and which are the female structures that normally accept the male pollen as part of the process of creating a seed. The plant itself is sterile and does not produce male pollen and so there is nothing for the stigmas to work with. Instead, over the two-week period that crocus fields bloom, human gatherers go out and pluck out these stigmas with tweezers. The stigmas are then dried and sealed in light-tight packets to maintain the spice’s longevity. Because it takes in excess of 70,000 flowers, which requires a square kilometer in crop area to yield one pound of saffron-producing stigmas, the price tag becomes more understandable. Saffron is graded and it is possible to buy less expensive material, but the lower grades usually contain some of the yellow styles, which are the male structures. These styles do not seem to possess much, if any, spice attributes.

Throughout history, saffron has been used not only as a spice, but also as a medication, a dye, a perfume ingredient and a pigment. When the color saffron is mentioned, many of us think first of the saffron-colored robes of Buddhist monks. These days, those robes are dyed with a resin from trees of the  Gamboge (Garcinia) family because saffron is simply too expensive — if indeed it was ever really used for that purpose.

Saffron has been known to humanity for a surprisingly long time. Some 50,000 years ago, saffron was already being used as part of a red pigment found in cave-paintings in Iraq.  There is also reference to it from the 7th century BCE from a botanical treatise compiled for the Assyrian king Ashurbanipal. More recently — 3,600 years ago — there are frescoes from the Minoan civilization of Crete showing the gathering of saffron. That civilization was terribly impacted by the explosion of Santorini around 1613 BCE.

For those who might now like to grow and dry their own saffron-producing plants, there are several companies that supply Crocus sativus corms: www.dutchgrown.com/crocus-saffron.html, www.brentandbeckysbulbs.com and www.waysidegardens.com. Enjoy!