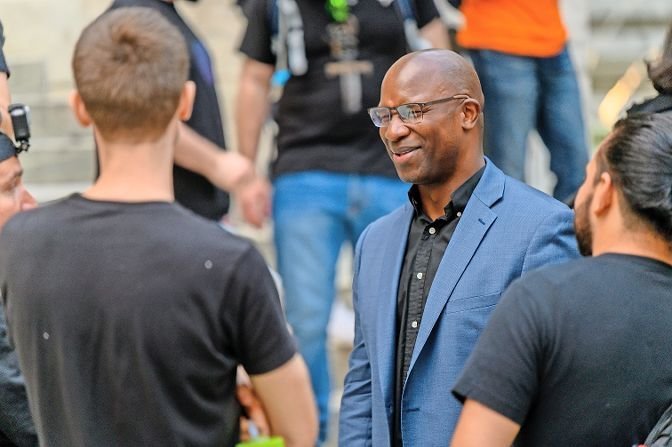 U.S. Rep. Jamaal Bowman is under attack again from Hebrew Institute of Riverdale rabbi Avi Weiss over his support of a bill intended to restrict how Israel uses its American aid money.
File photo courtesy of Jamaal Bowman campaign 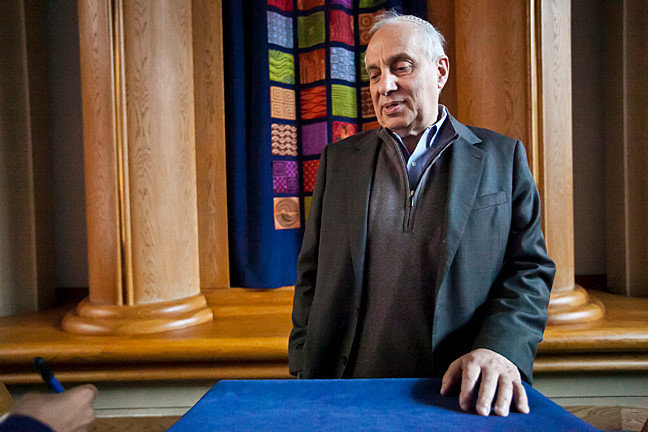 Rabbi Avi Weiss is criticizing U.S. Rep. Jamaal Bowman again, this time for his support of a bill intended to condition foreign aid to Israel over how it treats its Palestinian neighbors.
MARISOL DIAZ / File
Previous Next
By MICHAEL HINMAN

U.S. Rep. Jamaal Bowman is backing a congressional bill many say already is dead on arrival that intended to restrict American financial aid to Israel.  But one outspoken critic of the congressman apparently has had enough, pushing an online petition condemning Bowman's move.

It's all over legislation introduced last week not by Bowman but instead Minnesota Democrat Betty McCollum she's calling the Defending the Human Rights of Palestinian Children and Families Living Under Israeli Military Occupation Act. The title alone has apparently angered Hebrew Institute of Riverdale rabbi Avi Weiss, who said conditioning aid "not only weakens Israel, but also America."

"Rather than support this bill that falsely and outrageously demonizes Israel, we would have expected you to raise a voice of moral conscience against this dangerous legislation," Weiss and Young Israel of Scarsdale rabbi Jonathan Morgenstern wrote as part of their online petition.

McCollum — known for her past efforts to limit how Israel spends American aid — says her bill is not intended to weaken Israel, but instead prevent the country from using aid to help fund military operations in the West Bank and East Jerusalem, especially those that jail Palestinian children or destroy Palestinian property.

"U.S. assistance intended for Israel's security must never be used to violate the human rights of Palestinian children, demolish the homes of Palestinian families, or to permanently annex Palestinian lands," McCollum said, in a release. "Peace can only be achieved by respecting human rights, especially the rights of children, and this includes the U.S. taking responsibility for how taxpayer-funded aid is used by recipient countries, Israel included."

The bill's congressional co-sponsors are made up of a small group of Democrats including those known as Capitol Hill's "Squad" — U.S. Reps. Alexandria Ocasio-Cortez, Ilhan Omar, Rashida Tlaib, Ayanna Pressley, Cori Bush and Bowman.

In her bill, McCollum claims Israel detains up to 700 Palestinian children each year, running afoul of human rights groups which say some of the children are interrogated for hours without a parent present, and occasionally arrested in the middle of the night.

McCollum also cites a report from the Israeli Committee Against Home Demolitions that claims the country had razed more than 48,000 Palestinian structures since 1967 — half of which were homes.

"Punitive demolitions function as an act of collective punishment against the families of suspects or perpetrators, and create insecurity in the surrounding communities," McCollum wrote in her bill. "Though Israeli authorities maintain that punitive damages are a means of achieving security, Israel does not demolish the homes of Israelis who have committed crimes against Palestinians as part of its policy."

This isn't the first time Weiss and Bowman have been at odds. The rabbi's open letter to the then-congressional candidate last year earned national attention, expressing Weiss' concern Bowman's affiliation with Ocasio-Cortez would force a blind eye to crimes and abuses he says are perpetrated by the Palestinian Authority.

Earlier this year, Weiss resurfaced to criticize Bowman again over his claims Israel was not doing its part to help Palestinians gain access to the coronavirus vaccine.

"The Palestinian government is party to the Oslo Agreement which, in Article 17, declares that it is responsible for the health of its citizens," Weiss wrote to Bowman last January. "When considering this just two years ago, the Palestinian Authority allocated $330 million to the families of terrorists — money that could have covered the cost of vaccines for all of their people. They bear responsibility."

A request for comment from Weiss early Monday evening was pending return.  In a statement to The Riverdale Press, Bowman says he's both "pro-Israel and pro-Palestine," adding that "supporting the security of Israel and the rights of Palestinians are not mutually exclusive. In fact, they are entirely intertwined."

"Given the size and share of foreign aid received by Israel — which is the largest cumulative recipient of U.S. foreign aid in the world, and receives billions every year — it's incredibly important that we ensure taxpayer dollars, whether abroad or at home, comply with U.S. laws and with international humanitarian laws. Support from the U.S. government should be used to address the true security threats faced by Israelis. Our taxpayer dollars should not be used as a means to entrench the occupation of Palestine, which is counter-productive to achieving peace and a two-state solution."

A number of political groups back McCollum's bill besides Bowman and other congressional members including Jewish Voice for Peace Action, Americans for Peace Now, and the Justice Democrats. Another group is backing a McCollum bill for the first time — J Street — which The Intercept described as an organization that supports aid to Israel but opposes the country's military efforts in regions claimed by Palestinians.  J Street's support could encourage more Democrats to sign onto the bill, according to the publication, but the legislation still isn't expected to get too far in the U.S. House.

Petition against Bowman bill
Rabbi Weiss challenges Bowman over Israeli COVID vaccination efforts
Bowman to Weiss: We have so much to learn from each other
Jamaal Bowman statement to Rabbi Avi Weiss over Betty McCollum bill