Were homeless rushed out of hotels, back to shelters?

COVID-era program has ended, but new problems may emerge in 'new normal' 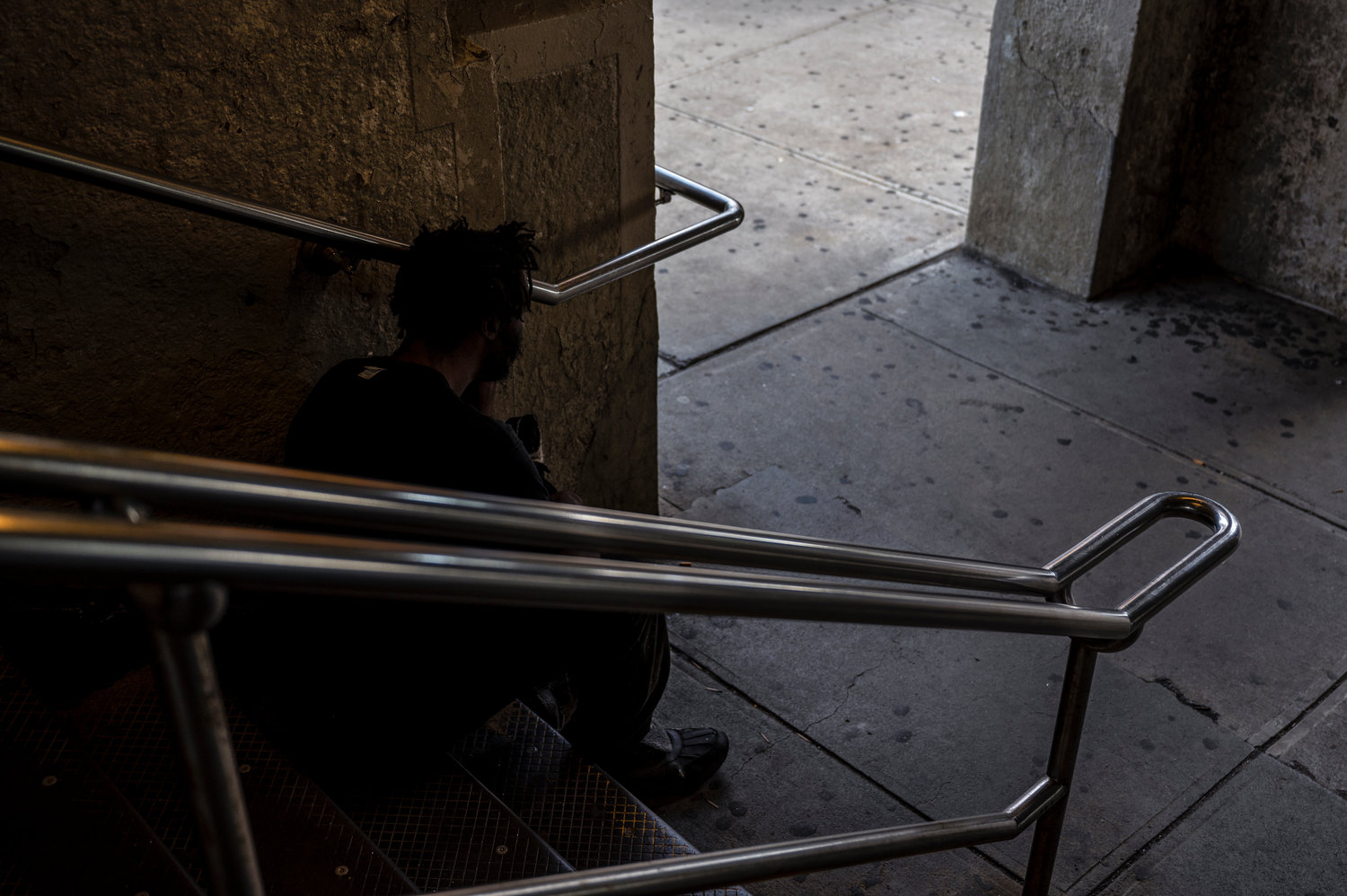 A homeless man sits on the steps of Woodlawn’s subway station just a stone's throw from a men's overnight shelter. Some in this part of the Bronx are concerned the city's hasty move to transfer homeless people back to congregate shelters and out of the hotels they stayed in during the height of the coronavirus pandemic may result in more loitering and trespassing issues, disrupting residential and retail neighborhoods.
HIRAM ALEJANDRO DURÃN 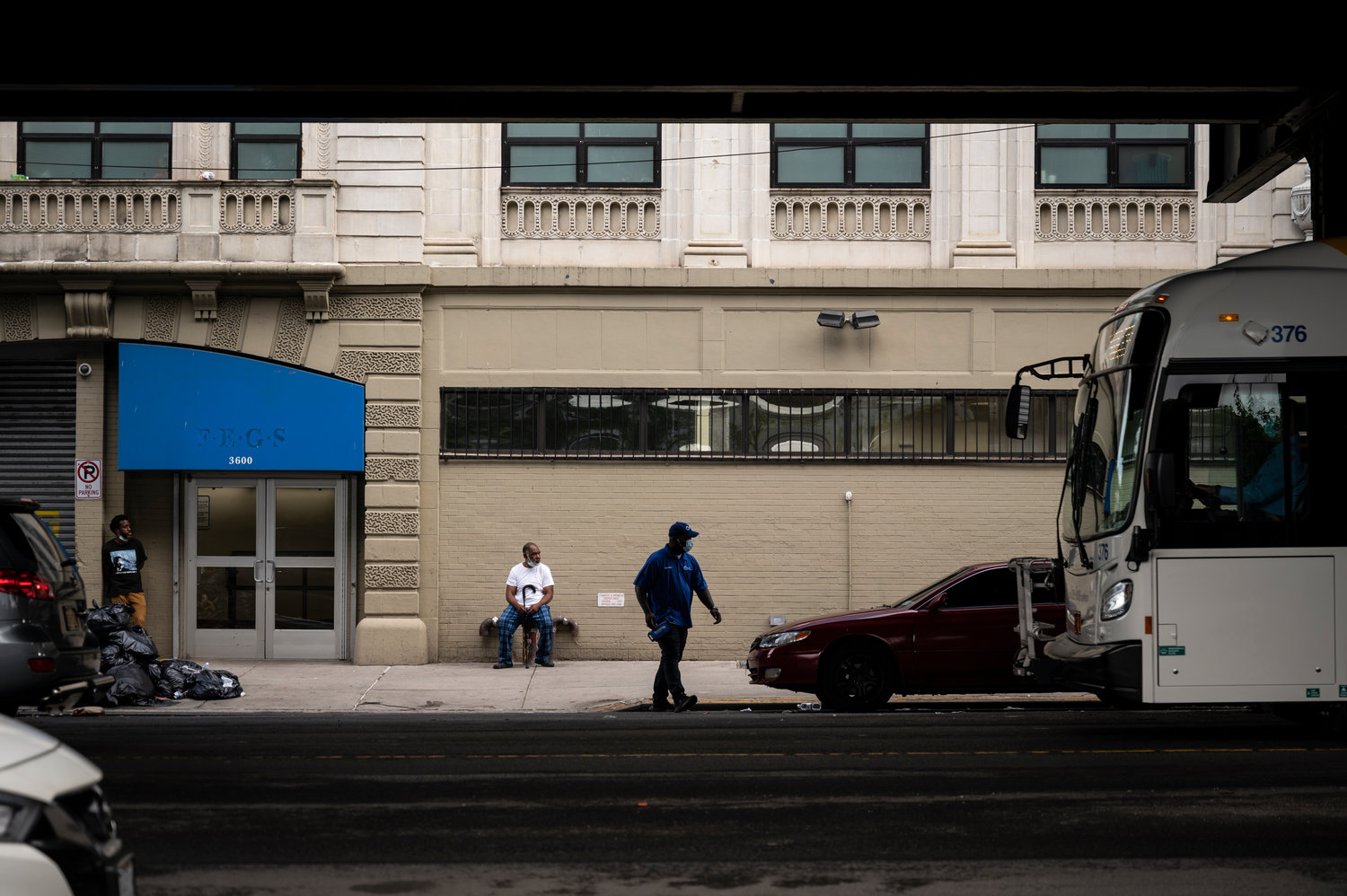 BronxWorks already has moved all 200 residents back into its Jerome Avenue men’s shelter in Norwood last month after many of its residents spent time in hotels.
HIRAM ALEJANDRO DURÁN
Previous Next
Support journalism

Tony Edwards is concerned about the homeless, but not quite the way others might express that concern.

Edwards — president of the Marble Hill Houses tenant association — says he’s witnessed some activity in his complex he believes is evidence of just how hasty a move it was from Mayor Bill de Blasio to relocate homeless people out of the coronavirus pandemic-era hotel rooms they were staying in back to shelter space.

Marble Hill Houses is part of the New York City Housing Authority, but some space is occasionally commandeered by the homeless — space many of them have been occupying for the past three months.

“We have an issue here,” Edwards said. “We previously had two gentlemen staying in our buildings. Now we have one individual who’s been residing on a roof of ours in Building 11.”

Edwards’ concern is that once people are pushed out of hotels, some may be reluctant to return to city shelters. Instead, they’ll find refuge in vulnerable places like Marble Hill’s rooftops and hallways.

“Our housing supervisor each morning, he’s calling the police to have him escorted out of the building,” Edwards said of one homeless man who has tried to squat in the building. “And I know that the residents are upset because this guy, he’s here so much, he thinks he’s a resident pretty much.”

And it’s not that Edwards has a cold heart when it comes to those less fortunate. It’s just this particular individual has a history of being violent.

“This one guy, he actually assaulted one of the supervisors,” Edwards said.

Although police were called and the man was arrested at the time, Edwards contends that just wasn’t enough to keep him away.

“He’s already been arrested for the assault,” Edwards said, “but the guy keeps coming back.”

Both Marble Hill staffers and cops chase the man out of the buildings every morning, but he returns after the sun sets with what Edwards says is no regard for the law.

The city already has started transitioning homeless people from commercial hotels back to congregate shelters. The move came as a federal judge gave his blessing to the move with slight overall changes to the city’s approach.

It was just last month that judge ruled the city failed to adequately make accommodations for those with susceptible health conditions and disabilities.

Critics of the mayor’s plan applauded the ruling at the time, saying now is not the time to displace homeless people back into city shelters.

Housing advocates in particular believe the city should work on providing those in hotels with permanent housing rather than attempting to send them back to overnight shelters.

But that’s more than what the city can take on right now, officials said. They maintain commercial hotels were only a temporary solution to keep the virus from decimating the homeless population at the height of the pandemic.

Yet, even with the delta variant spreading quickly across the city, Mayor Bill de Blasio’s team believes health indicators are actually headed in the right direction. And there is no better time to end the temporary program.

In recent days, New York City has seen more than 1,000 new cases of COVID-19 per day, primarily from unvaccinated people who, more often than not, end up in the hospital.

Meanwhile, officials from the city’s homeless services department are scrambling to meet the judge’s conditions in order to end the hotel program and get people back into shelters.

“Of course, we are working around the clock to comply with the court order,” DHS spokesman Isaac McGinn said.

One of those conditions requires the city to provide seven-days notice to anyone residing at a hotel before moving them out.

The city also says it’s working with the Legal Aid Society — the organization that sued over the hotel issue in the first place — to make such transfers back to shelters as smooth as possible. Both sides are even developing a script of what information would be shared with the person being moved at least five days ahead of each relocation as part of the court-mandated improved communications with those being hit with the moves.

“As we and the New Yorkers we serve return to shelters, we remain committed … to granting accommodations as requested, as we have in hundreds of cases already,” McGinn said.

What these accommodations are, city officials aren’t saying. But some reports indicate shelter providers will need to take measures that will help prevent the spread of the coronavirus as well as meet the needs of anyone living with a disability they house.

Although this may impact some of the city’s shelters, BronxWorks — a non-profit provider of homeless services and shelters throughout the borough — contends that it has not affected its Jerome Avenue men’s shelter on the Norwood side of Van Cortlandt Park. In fact, that facility already has returned to full capacity of 200 residents, according to BronxWorks spokeswoman Sophie Crumpacker.

While officials seem to be optimistic about the move back to congregate shelters, housing advocates closer to home in this part of the Bronx are still concerned — but for much different reasons. Worrying about the safety of homeless people is one thing, but sometimes neighborhoods are forced to worry about their own safety if someone who is homeless is also dangerous.

Edwards fears Marble Hill Houses will continue having to deal with unwelcome visitors once the city has fully completed the homeless transition from commercial hotels to shelter.

Even worse, he doesn’t believe the city has any solutions for how to fix the problem of daily trespassers at the NYCHA complex.

“I’m not sure what the answer is,” Edwards said. “Housing doesn’t seem like they’ll know what to do, and that’s what worries me.”