Will next mayor have some faith in city’s youth? 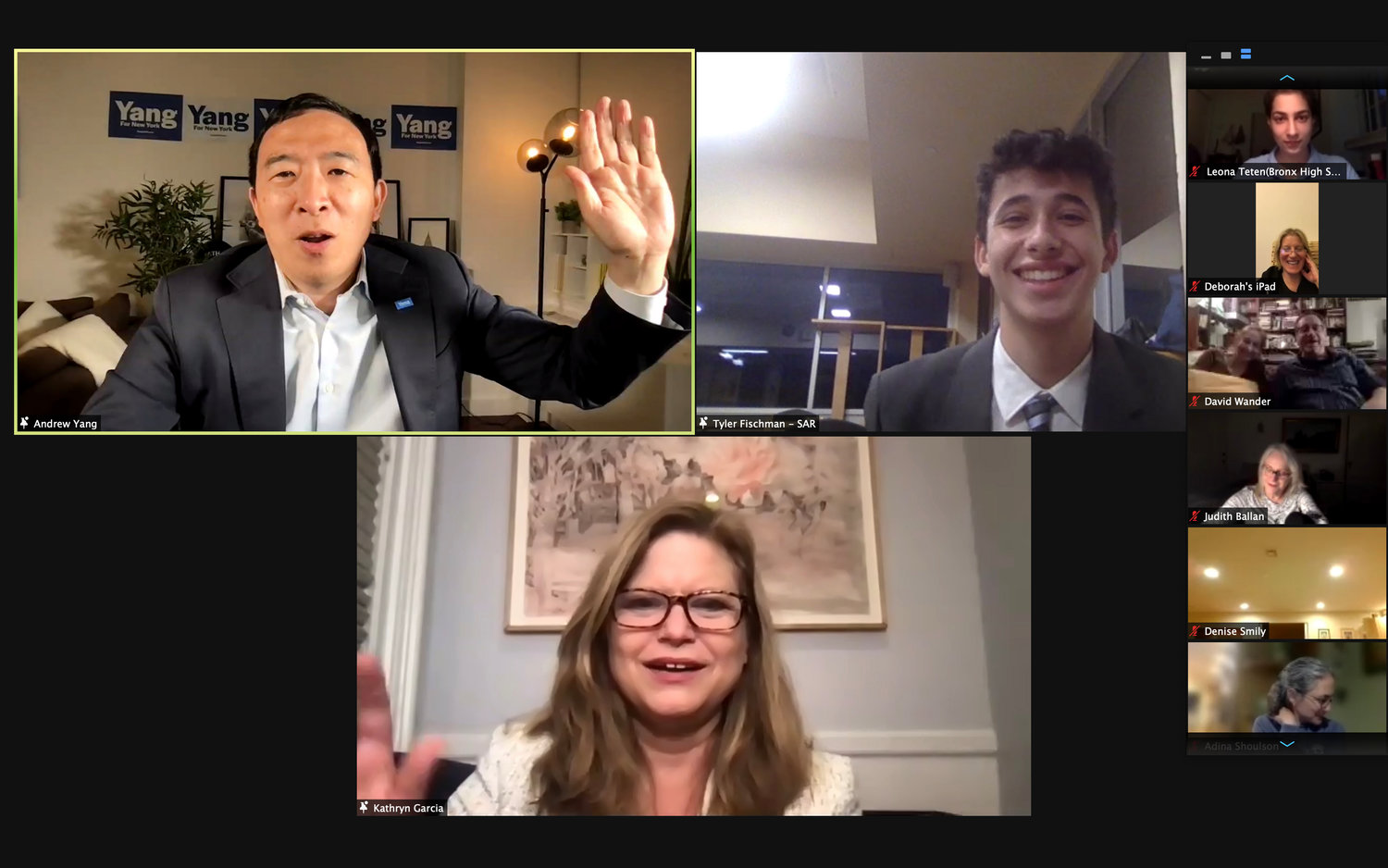 Andrew Yang and Kathryn Garcia were among six mayoral candidates attending an interfaith forum hosted by SAR High School students Tyler Fischman and Eytan Saenger last week. The students asked each candidate what the city would look like under their leadership in four years — when the vast majority of them can vote.
HIRAM ALEJANDRO DURÃN
de Blasio, Bowman headline conference

Beginning at 9:30 a.m., the conference is intended to provide updates on state-level housing policy from a number of commissioners, including those from the state’s Homes and Community Renewal Commission, the city’s housing and preservation and development department, and the New York City Housing Authority, among others.

de Blasio will keynote the conference, while Bowman is expected to join a panel discussion on the importance of providing broadband access in affordable housing.

Additional panel discussions will focus on the looming eviction crisis, financial transitional housing, and the federal housing policy update, according to a release.

Other electeds expected to attend are Manhattan-based state Sen. Brian Kavanagh and Assemblyman Steven Cymbrowitz, both of whom chair the housing committees in their respective chambers

In less than two months, voters are expected to choose who will most likely be their next mayor in the Democratic primary. A laundry list of candidates are competing to move into Gracie Mansion come January.

Whoever wins will lead the city’s economic recovery from the coronavirus pandemic while addressing a number of other issues.

Although most of the teens who hosted the forum can’t vote in this election, Fischman said, they still want the next mayor to take the concerns of interfaith youth seriously.

“New York is the most diverse city in the world, and that’s something that obviously needs to be taken into consideration by the next mayor,” Fischman said.

“Also, this is the last election where most of us won’t be able to vote. So, this is our attempt at sort of shifting the future of the city at a pivotal time when an entire new wave of leadership is going to come in.”

To have a full range of perspectives at the forum, Fischman and Saenger — both of the Modern Orthodox Jewish community — brought Jewish, Muslim and Christian youth together.

To that end, they partnered with the Interfaith Center of New York and the American Jewish Committee along with several other faith-based organizations. They brought together students from St. Jean Baptiste High School and Bishop Loughlin Memorial High school — Catholic schools in Manhattan and Brooklyn, respectively.

Other students represented the Razi School, an Islamic high school in Queens, who joined their peers from various faiths hailing from some public schools and colleges.

The recent rise in hate crimes across the city was an important theme throughout the forum with the young moderators asking each candidate how they would address it as mayor. The issue is especially prescient in this corner of the Bronx after a man was charged with vandalizing several neighborhood synagogues last month in acts being treated as hate crimes.

There’s also been a significant rise in anti-Asian hate crimes since the coronavirus pandemic started. As an Asian-American himself, Chang says he feels unsafe in the city for the first time in 30 years.

“One way that my behavior has changed as a result is that when I go into the subway now, I look for other Asians and I want to be near them,” he said. “It provides some sense of comfort and safety.”

More policing is not the best way to stem the rise in hate crimes, Chang said — instead the role mental health issues play in these acts needs to be addressed. This is why, if he becomes mayor, he wants to add 10,000 shelter beds across the city to house homeless people struggling with mental health issues.

After saying hello to those in attendance in every language he could think of, Adams said he believes hate crimes have risen because New York is a segregated city, where people from different cultures live in isolated bubbles.

“We live next door to someone who’s a different ethnicity or culture, we don’t even say good morning to each other,” Adams said. “We don’t look at each other in the eyes. We don’t even understand why someone wears a yarmulke or kufi.”

His solution? Incorporate lessons about the city’s many different cultures and religions into the public school curriculum. That way kids can understand and celebrate these differences from an early age.

As a former police officer himself, policing cannot be the only answer to this problem, Adams said — but it’s important the perpetrators of hate crimes are arrested and held accountable.

Garcia agrees. Police need to be on the beat patrolling neighborhoods to prevent hate crimes in the first place. While she isn’t for defunding the police, Garcia added she believes it’s crucial officers be respectful of the communities they serve.

“We have to have a police force that is engaged with the community,” Garcia said. “And that is doing the tough work to make it so that we are all safe, regardless of the color of our skin.”

The students also asked the other candidates about their vision for the city in four years as mayor — when all of them will be voting age. At that point, Garcia said, religious minorities will feel safer in their communities and the city’s economy will have rebounded from the current downturn. “And then you’ll vote for me,” she said.

Yang is excited about the prospect of welcoming these students into the voting ranks.

“Oh, it’s so fun to think about you all voting for my potential re-election,” he said. “I mean, that’s like a real goal for me to aspire to.”

Forget about four years. In two years, Yang said he wants the city to have recovered the hundreds of thousands of jobs lost during the pandemic, and to once again have a thriving tourism sector.

But unfortunately, none of these students will have a say in who gets to be the next mayor this year. This makes it harder to get detailed answers from candidates in events like these, Fischman said.

“When you deal with being a kid interacting with any politician, it’s sort of like a double-edged sword,” he said, after the forum. “Obviously, the optics of interacting with an interfaith group of high school students are amazing. And they want to come. But then there’s like a struggle to be taken seriously, in a way.”

However, Fischman said he was ultimately happy with the answers the candidates gave throughout the night.

“I think the questions we asked are really relevant to our lives,” he said, “and I think the answers really made sense.”